Party in the Streets – Carnival in Las Tablas, Panama (Day 1)

Following Friday night’s crowning of the Carnival queens, Saturday marked the official start of Day 1 of Carnival in Las Tablas, Panama with tens of thousands of dollars worth of floats, costumes, bands, and fireworks parading around the town’s main plaza. By noon everything and everyone was in place and thousands of Carnival (aka Carnaval) goers, including us, were ready for a party in the streets. 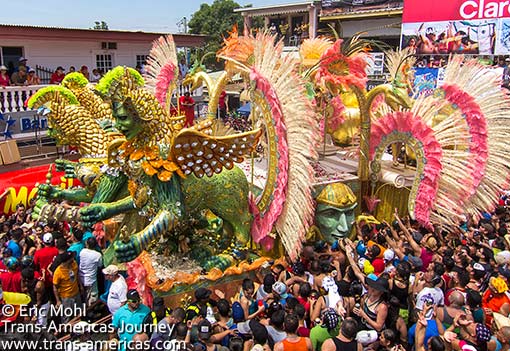 We’re not exactly sure what the theme of the very first Calle Arriba float of Carnival  in Las Tablas, Panama was but it had a cool platform for the queen that raised and lowered.

Each tuna (the team behind each queen) spends hundreds of thousands of dollars to outdo the other when it comes to floats, dresses, bands, fireworks, costumes, staging, production values, and more. This money is raised during special events, hosted by the queen, in the year leading up to her Carnival debut. 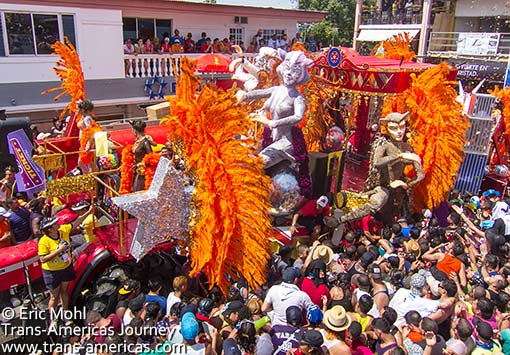 The arrival of the first queen on her float followed by her rolling band and supporters on foot was marked by an explosion of noise-making fireworks, as if everyone wasn’t already paying attention. A massive quantity of fireworks was shot off by both sides right on the streets that go around the main square in Las Tablas.

The police did their best to push the crowd back to a “safe” distance as box after box of fireworks was ominously laid out on the street but no matter how you looked at it, OSHA would not have been amused. 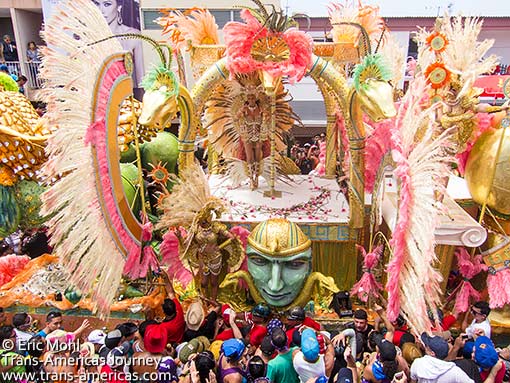 The Calle Arriba queen doing her queenly thing during her first procession on Day 1 of Carnival in Las Tablas, Panama.

After the fireworks were over the crowd immediately re-formed in the streets but they parted just enough to let the massive procession of floats and feathers travel around the main square at a snail’s pace. The first Calle Abajo float, featuring their queen Ana Gabriela Rodríguez Vasquez, appeared to be a tribute to Cats on Broadway. For real.

The first Calle Arriba float was, well, we weren’t sure what it was but it wasn’t Cats on Broadway. It also had a nifty platform for their queen, Maruquel Madelaine Gonzalez Valesquez, that raised and lowered impressively and had what appeared to be a stripper pole installed on it. Both queens were certainly wearing stripper heels. 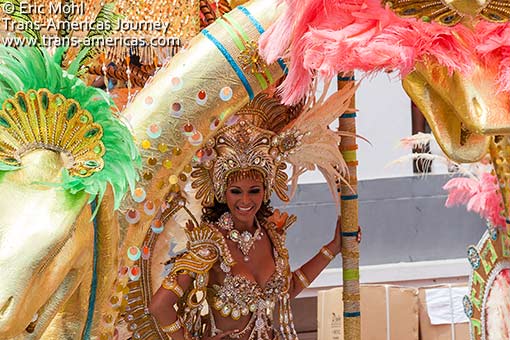 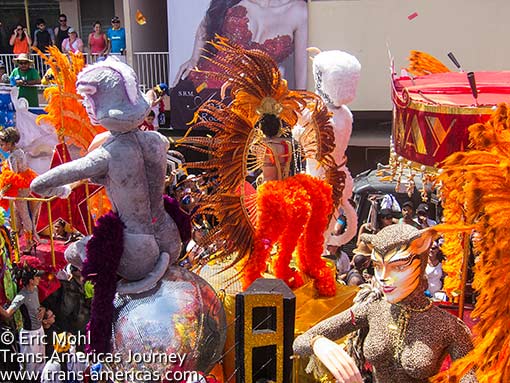 The first float from Calle Abajo during Carnival in Las Tablas, Panama had a “Cats on Broadway” theme and was designed in such a way that we could only get this from-behind shot of the Calle Ariba queen, Ana Gabriela Rodríguez Vasquez.

Check out our video, below, from the daytime processions on Day 1 of Carnival in Las Tablas, Panama for more pomp and pumps.

That’s not the only thing that was hot

Carnival takes place in the midst of the dry season in Panama with temperatures regularly breaking 90 degrees Fahrenheit (32 degrees Celsius). To help beat the heat, tanker trucks filled with water line the Carnival parade route. Each is outfitted with a temporary platform on top from which people use a massive hose to douse the dancing, cheering crowd below. The queens and the floats are off limits but everything else is fair game creating a sopping wet dance party called a culeco. 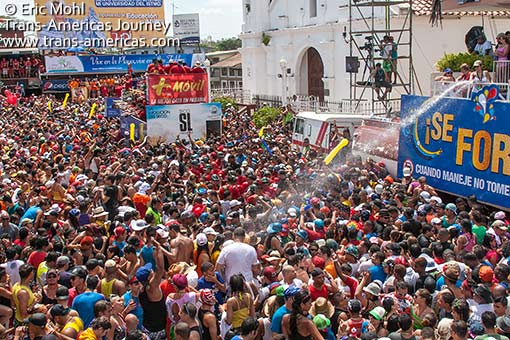 Soaring temperatures are no match for tanker trucks filled with water and hose wielding onlookers who douse the dancing crowd during daytime Carnival festivities.

The hoses aren’t firehose strength, but they get the job done and soak anyone within range. We stayed above the fray and the spray thanks to the generous hospitality of Rita, the GM of Thrifty Car Rental in Panama which had secured an elevated viewing platform along the parade route.

With price tags up to $500,000 per queen, corporate sponsorship is a big part of Carnival. Logos appear all over the place and the queens appear in ads for everything from cell phone companies to something called Gastrogel.

Time for a disco nap

The dueling queens made lap after lap around the square until about 3 pm when the floats and the followers turned off the square and headed back to the nearby neighborhoods they came from. We pictured the home base of each queen to be a combination float factory and beauty cave, equal parts glue gun and Elnett.

The end of the daytime parades was our cue to head back to our room at Hostal Villas de Zianit for a quick disco nap in prep for the nighttime events. As we made our way through the still-thick crowd back toward our truck someone poured what we hoped was water down the back of Karen’s shirt.

By 11 pm we were back in the Thrifty box. The water trucks were gone (they’re only in effect during the day) leaving room for even bigger crowds in the street. Soon, disturbingly large and close fireworks were exploding marking the entrance of fresh floats from each queen. During night processions there is a lead float and then a second float which the queen rides on. These were even more elaborate than the daytime floats but designed in such a way that it was often difficult to get a clear view of the queens.

Check out our noisy and festive video, below, from the over-the-top nighttime processions on Day 1 of Carnival in Las Tablas, Panama.

And here’s what the floats and fireworks looked like. 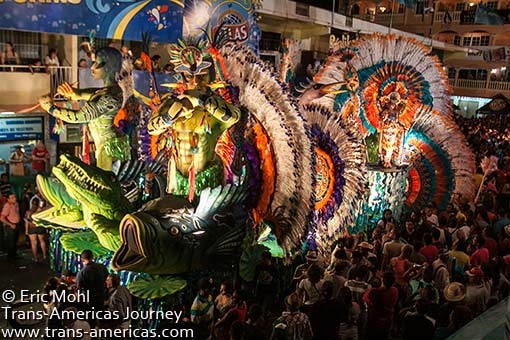 Huge fantasy animals and a flock’s worth of feathers made the first nighttime float from Calle Arriba truly spectacular during Carnival celebrations in Las Tablas, Panama. 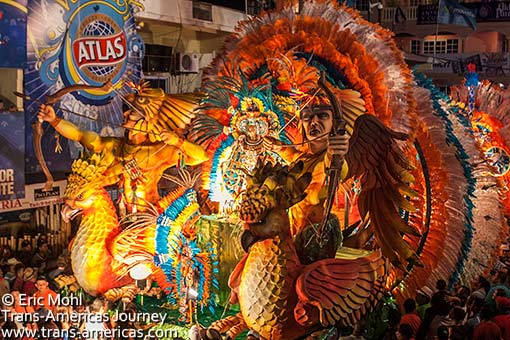 The second float from Calle Arriba has their queen, Marquel Madelaine Gonzalez Valesquez, on board and was lead by a pair of flamboyant Harpy Eagles which are the national bird of Panama. 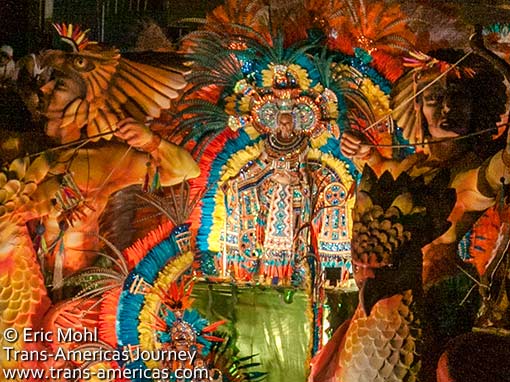 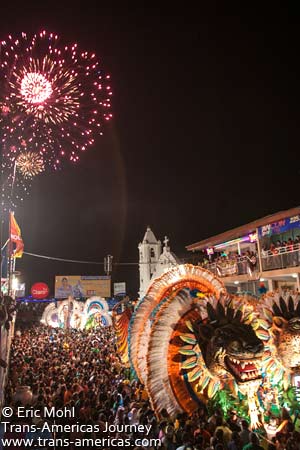 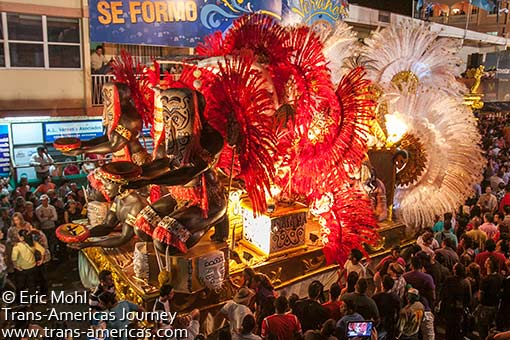 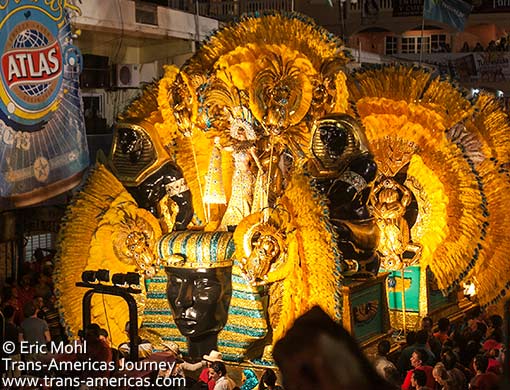 Queen Ana Gabriele Rodríguez Vasquez does her best Cleopatra impression from on top of the second nighttime float from Calle Abajo during Day 1 of Carnival in Las Tablas, Panama. 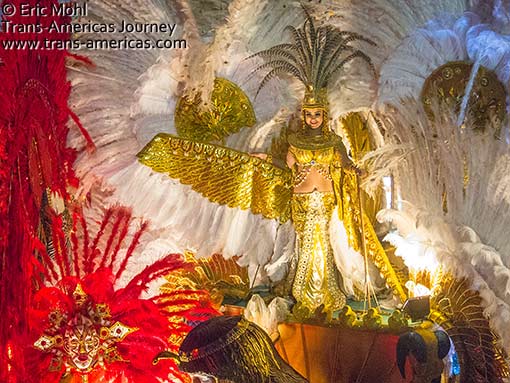 The princesses that adorn floats along with each team’s queen, like this one on a float from Calle Abajo, get elaborate costumes as well and are chosen, in part, by their ability to pay for them.

After lapping the square for a couple of hours, serenaded by the band that followed each queen banging out her unique, rousing, and impossibly repetitive theme songs, these floats headed back to their respective neighborhoods.

Embers from the post-parade fireworks landed all around us, one of them singeing Eric’s hair. When a mat of fireworks was tossed on the flames creating a massive fireball we figured it was time to get off the plywood viewing platform we’re standing on, just in case. We’re not ashamed to say we ran.

Ten loud, tense minutes later the finale fireworks finally ended but the crowd was nowhere near ready to call it a night. The temporary outdoor clubs set up a few blocks off the square were raging and plenty of people simply milled around the square through the still-smoldering ashy, papery remains of the fireworks as if retracing the path of the floats.