Travel to Antioquia province and you will soon see that it is the Texas of Colombia: uncouth, proud, and generally bigger, badder and better than the rest of the country (in its own not-to-humble opinion). Medellin, the capital of Antioquia, is all of those things times 10. Get what you need to know in our city travel guide.

The city of Medellin, Colombia fills the Aburra Valley in Antioquia province.

How Antioquia and Medellin got that way

Like Texas, the people of Antioquia excel at raising cattle and crops and they’re savvy businessmen as well. One theory that we heard repeatedly says that you can blame the Spanish Inquisition for that because during the Inquisition, Jews in the Spanish world (including Latin America) were faced with an unacceptable choice: convert or die. Jews in Colombia headed for the hills and many of them ended up in the (then) nearly inaccessible valleys of Antioquia where their business acumen mingled with the agricultural skills of local farmers.

Today the inhabitants of Antioquia and Medellin call themselves Paisas. You’ve all seen a Paisa. His name is Juan Valdez and even though Señor Valdez is a stereotypical fictional character created to sell Colombian coffee, you see dudes who look just like him in Medellin and all around Antioquia all the time.

Colombians who live in the big, cosmopolitan capital of Bogotá tend to deride Paisas as hicks. Us? We think Paisas give Medellin the feel of a country town that’s grown huge but is still just a country town at heart. You really do get the sense that if the modern amenities of Medellin disappeared tomorrow and the place reverted to its roots few locals would mind and some would consider it an improvement. And we love that.

Leave your Medellin misconceptions at home

Yes, yes, yes. Not so long ago Medellin held the dubious honor of being the “murder capital of the world” (a distinction now held by San Pedro Sula, Honduras) thanks to narco terrorists like Pablo Escobar (who was killed in 1993) and other jokers including guerillas and paramilitary groups whose calling cards were random acts of violence which nearly crippled the country. 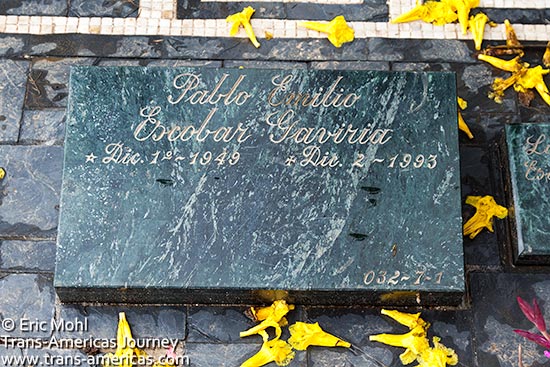 Pablo Escobar’s grave in a cemetery in Medellin.

Over the past decade or so, violence across Colombia has been consistently falling including in Medellin where murder rates in the city dropped 34% in the first quarter of 2014. According to Insight Crime, a non-profit which monitors the threat of organized crime activity to citizens in Latin America and the Caribbean, Colombia is on track to have its least violent year in three decades.

The US State Department continues to periodically warn about violence in Colombia and, like all cities, Medellin still has a crime problem. For example, while murder rates continue to drop, robbery is proving harder reduce. When he arrived in Medellin to shoot scenes for yet another Escobar-related movie (a film called “Mena”) actor Tom Cruise reportedly arrived with 12 body guards.

However, we’ve spent more than 16 months in Colombia – more than six months of that in Medellin – and we’ve only had one brush with crime or violence and that did not occur in Medellin but in a far-flung area near a known red zone (areas which the Colombian government concedes are under the control of FARC or other guerilla groups) where we were caught in the middle of a skirmish between FARC rebels and Colombian soldiers.

So, pack your common sense but leave your misconceptions about Medellin at home.

We’re not buying all the cheerleading by city officials who keep going on and on and on about things like the city’s 2013 ranking as “City of the Year” by the Wall Street Journal. Instead, we put our stock in our own experiences in the city. Here are a few illuminating observations.

Medellin (pronounced Med-uh-jheen) is the second largest city in Colombia with a population of nearly four million all living in the center of the large Aburra valley in the Central Andes which is about 35 miles (60 km) long and 6 miles (10 km) wide at its widest. This means the city has the crowds, traffic, noise and pollution that comes with a population that big. There’s also a noticeable population of homeless people, stray dogs, and other big city scourges that feel normal to New Yorkers like us.

On a more charming note, Medellin is teeming with vintage Renault Masters and we’re sort of loving their tiny, boxy, indestructible utilitarianism. And at least half of the city’s sidewalks have special ridged strips down the center leading to nubbed concrete at the corners. These are guides for the blind. They are also awesome.

Medellin has an amazingly clean, cheap and efficient metro system. City officials spent months training locals about how to ride and respect the system before it was unveiled in 1995 and its cleanliness and civility put the New York City subway system to shame (admittedly, it carries a fraction of the passengers each day, but still). 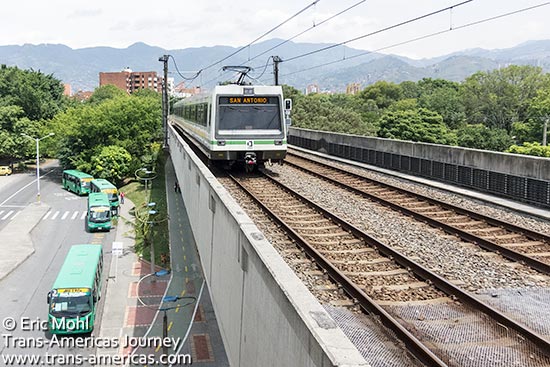 Medellin’s Metro System is a point of pride and a clean, safe, efficient and cheap way to get around the city.

At one point we saw metro cars plastered with public service posters warning women to check out their doctor’s credentials before getting plastic surgery, which is a huge business in Medellin including boob and butt augmentations that some women seek out to get what’s been called the “Narco Beauty”. 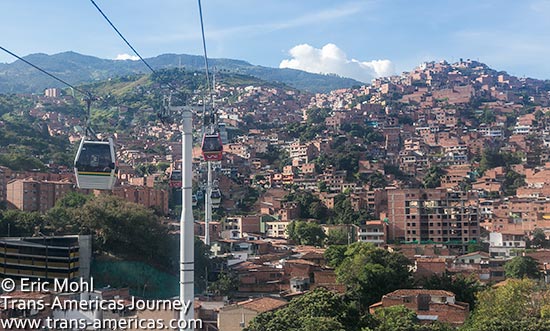 Medellin’s Metrocable serves the thousands of people who live in under-developed comunas on the hillsides around Medellin.

Medellin is located in a steep-walled valley with the city occupying the valley floor and the foothills and impoverished comunas creeping up and up and up the hillsides. Those poor neighborhoods have not necessarily benefited from city improvements like the metro system (which only operates in the valley) and that whole “City of the Year” thing, but the government has instituted some programs designed to improve life for comuna dwellers including an aerial tram system called the Metrocable that makes it much easier to get to and from the city and a library program that has built modern, book-filled structures in various comunas. 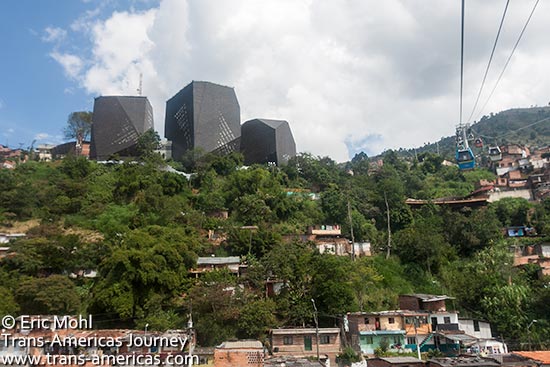 Those ominous looking dark buildings are the Biblioteca Espana, one of a dozen or so libraries built in under-developed comunas that cover the hillsides around Medellin.

They call Medellin the city of eternal spring and that is one hyperbolic claim we can agree with. The city sits at an altitude of about  5,000 feet (1,525 meters) and the mountains that surrounded it rise to more than 10,000 feet (3,000 meters). This creates weather so temperate and predictable (basically a high of 80 and a low of 65 every single day) that very, very few homes have heating or A/C or even fans. It’s simply not needed.

There’s not much to do in Medellin, but come anyway

Medellin isn’t brimming with tourist attractions. By far the city’s biggest claim to fame is its annual Flower Festival which happens around August every year and celebrates Antioquia’s flower growing heritage, proud Paisa culture, and general love of a good party. We’ve been in Medellin for two consecutive Flower Festivals and you can check out the flowers, tradition, parades, and controversies in our series of Flower Festival posts. 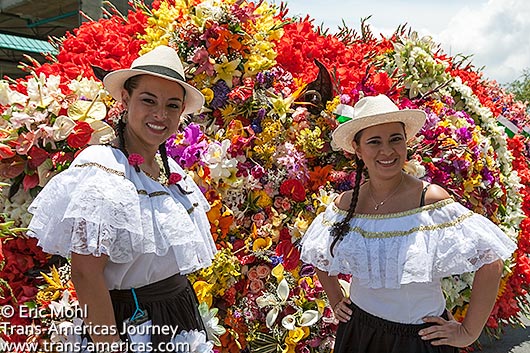 Part of the splendor of the annual Flower Festival in Medellin.

Colombian painter and sculptor Fernando Botero was born in Medellin and his art still flavors the city though the artist hasn’t lived full-time in Colombia in years. Botero donated hundreds of works of art from his personal collection, including pieces by modern masters as well as his own sculptures and paintings, to the excellent Museo de Antioquia in central Medellin (10,000 COP or about US$3.50). 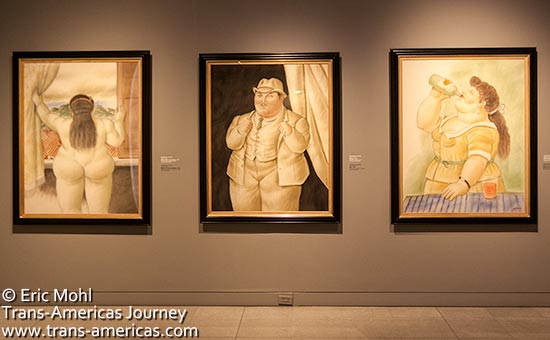 In front of the museum is Botero Plaza which is filled with the artist’s enormous, proportionately exaggerated bronze sculptures. The plaza is a free public space and the museum is well worth the entry fee both for the art collection and the chance to check out the building itself. See why in our photo essay of all 23 Botero sculptures. 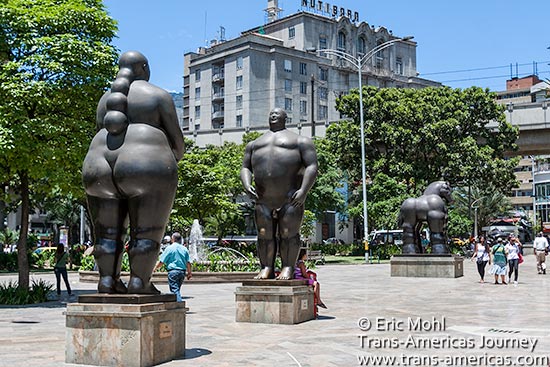 Parque Explora (15,000 COP or about US$5) opened in 2007 and is a massive interactive science center particularly interesting to kids and geeks of all ages. There’s an aquarium (the largest in Latin America), principles of science exhibits that demonstrate ideas like gravity and perspective, and rotating special exhibits with themes like “Water”. 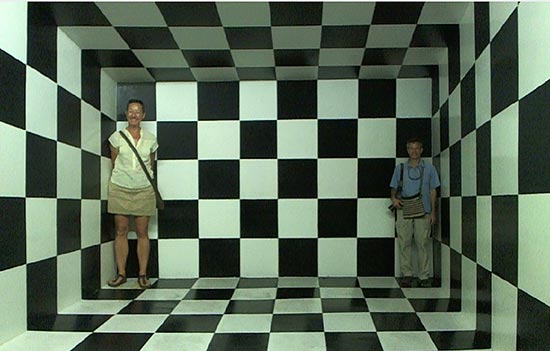 Us taking part in one of the interactive science exhibits at Parque Explora in Medellin.

And don’t miss our post about 9 FREE things to do in Medellin. 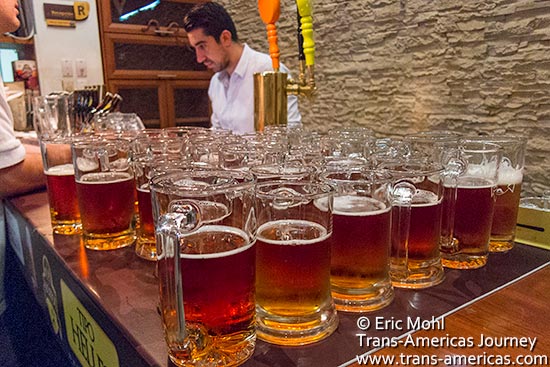 Craft beer at Apostle Brewery in Medellin, just one of a growing number of local microbreweries.

In recent years Medellin has seen a surge in craft brew making and craft brew drinking. Three local breweries also offer brewery tours and a variety of special party nights. Get the details in our post about where to drink good beer in Medellin.

For the less fancy, there’s this option: Drinking beers in front of small tiendas which double as neighborhood bars, is a commonplace throughout Colombia. However, Medellin seems to do it best with interesting places to sit among locals and enjoy a cheap Pilsner or Aguilla beer every few blocks in the city.We found some of these spots, generally with large TVs, to be some of the best places to hang out and watch beloved local futbol teams Atlético Nacional (which just turned down a buyout offer from Donald Trump) and Independiente Medellín on game days (Wednesdays and Sundays). 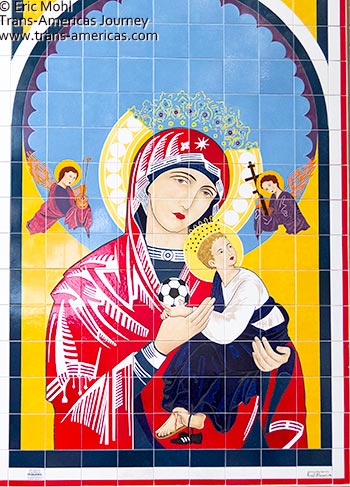 Medellin’s passion for futbol (aka soccer) runs deep. This mosaic, found at the Stadium Metro stop depicts Madonna dressed in the colors of one of the two rival teams in the city. She’s even holding a soccer ball.

Check out some choice moments from a soccer match in Medellin in our video, below.

Medellin has an active nightlife scene with bars and clubs centered in several areas of the city, most famously around Parque Lleras. If you wander La Setenta (Calle 70th between the Estadio and Laureles neighborhoods) on a Saturday night you’re in for some great people watching as the city gears up to party and Paisas from all walks of life spill into the streets from a wide array of clubs, bars and restaurants.

We do not recommend that you partake in the seedy, sketchy side of the nightlife scene in Medellin. Prostitution is legal in Colombia but that doesn’t mean that there aren’t incarnations of it that are downright reprehensible.

We can count the truly memorable Medellin restaurants on one hand (looking at you Carmen, Bonuar, and El Cielo). Just like in Texas, Paisas love their meat and you really shouldn’t leave Medellin without trying the local dish. Called Bandeja Paisa, it’s a vegetarian’s nightmare and a heart surgeon’s dream. Check it out in our post about our first (and last) Bandeja Paisa. 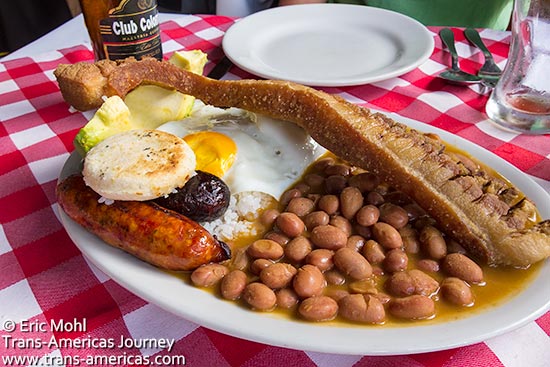 Yes, this is ONE serving of Bandeja Paisa featuring beans, chicharron (fried meaty pork skin), blood sausage, chorizo, a fried egg, an arepa and a slice of avacado.

Bandeja Paisa is best washed down with a shot or two of Aguardiente Antioqueño, the local version of Colombia’s beloved aguardiente which is a distilled cane spirit spiked with anise. Every region of the country has their own version of the stuff. Here’s what happened the first time we tried aguardiente.

A good way to get an overview (and a belly full )of locally beloved foods is to take a food tour of Medellin. It’s not fancy, but it is filling and fun.

There are no mind-blowing hotels in Medellin, though there are plenty of hostels, mid-range guesthouses like 61Prado, and a few hotels that manage boutique or business class status.
Book Now