Hotel Review: The Haciendas of the Starwood Luxury Collection in Mexico 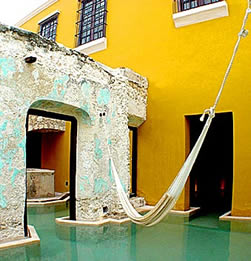 Starwood Hotels owns or operates more than 1,000 hotels in more than 100 countries. Fewer than 80 of those are part of the hotel giant’s elite Luxury Collection and only five of those are part of The Haciendas group in southern Mexico. These hotels are housed in what were once the grand homes of the owners of sisal (and sugar and cattle) farms and factories who made fortunes supplying natural plant fibers to the rope and twine making industry in the late 18th and early 19th centuries—not unlike Mexican versions of the southern plantations in the United States.

When sisal was pushed aside in favor of cheaper and stronger synthetic materials most of Mexico’s haciendas were abandoned and fell into ruin and the clutches of looters who quickly stripped doors, tiles, furniture and fixtures.

A few haciendas have been saved and meticulously restored, however, including the five that make up Starwood’s haciendas collection. Each has been brought back to life and infused with modern amenities (big-screen TVs, gourmet restaurants, epic swimming pools) which their original owners could never have imagined. 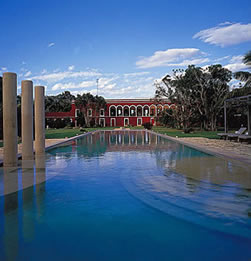 Despite their basic similarities, each hacienda has its own personality. Hacienda Temozon, which has hosted U.S. Presidents and international celebrities, is the most hotel-like with a grand entrance, a welcoming lobby/restaurant and a vast back garden and anchored by a long, welcoming swimming pool that laps up against what was the hacienda’s machine room. Its 28 rooms (some with terraces and outdoor plunge pools) have been created in every building on the property—including what was once the stable. There’s also a spa which offers the option of booking massages in the cool and organic entrance to an underground river on the property. 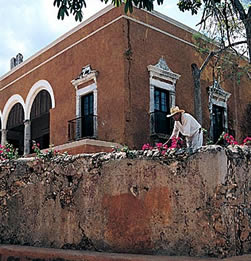 Hacienda Uayamon is the most remote of the haciendas with 12 stand-alone rooms dotted throughout its lush setting which are reached by following a geometric 100’ long water feature/art installation through the jungle. A small spa now occupies what was the stable and an intimate swimming pool has been created around elegantly crumbling columns which once supported a roof that’s long gone.

The 15 rooms at Hacienda San Jose include four Mayan-style rounded stand-alone luxe huts and one room, #9, which has a spectacular ceiba tree growing in the bathroom right up through the roof. Here the pool has been built in what was the original cistern and it includes hammocks strung irresistibly over the water. A 15 minute foot massage in the hotel’s small spa is a lovely welcome gift. 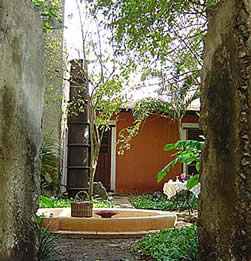 Hacienda Santa Rosa  is the most feminine of the haciendas. With lots of soft color and intricate decorative painting—some of it original and all of it created from records of how the house originally looked—this is the only hacienda in the group that feels like a woman might have originally lived here. In fact, a portrait of a woman (still unidentified) was the only piece of original furnishing the looters left behind by the time restoration began. Today, Santa Rosas’ 11 rooms are furnished with European pieces and the grounds include a medicinal garden full of plants the Mayans used in traditional healing. 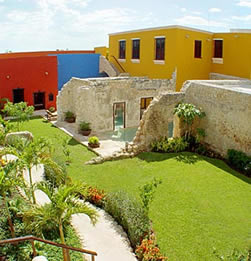 Finally, there’s Hacienda Puerta Campeche which isn’t actually a hacienda at all. Rather, it’s a series of buildings which were used to store sisal once it was brought from outlying haciendas into the city of Campeche. Skylights brighten up the 15 rooms and the pool meanders through the foundations and columns of a flooded building. A spa is currently being planned.

It must be said that staying in a restored hacienda is not for everyone. These are very old buildings in the middle of some very dense jungle and sometimes the creatures in the jungle like your room as much as you do (I killed a scorpion in my shower at Hacienda Uayamon). The haciendas are also remote, so don’t expect your cell phone to work—if a storm crops up the internet and the lights and even the electricity in general may call it quits too.

But if you’re looking to live a bit of history that’s unique to Mexico then The Haciendas may be for you.