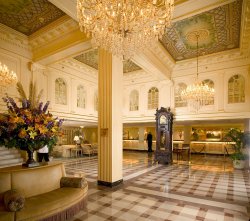 Despite what the Louisiana tourism commission might have to say on the subject, the number one reason to go to New Orleans is not Mardi Gras or the Jazz and Heritage Festival. Worthy as those annual events most certainly are, the best reason to visit the crescent city is to see, eat and do things that you can’t experience in any other place on earth, like sucking on piles of spicy crawfish after being invited to a boil by a complete stranger, or sitting next to a famous jazz musician in a tiny club on a Wednesday night and not even realizing it until he gets up onstage and begins to play.

While there’s no shortage of great hotels in New Orleans, the Hotel Monteleone offers something none of the others can: a uniquely New Orleans heritage and spirit that makes it the place to immerse yourself in more than just a deep tub and plush sheets.

Opened as a 64-room hotel in 1886 by an Italian cobbler named Antonio Monteleone, the hotel has spent the past 120 years expanding and glorifying itself into an architectural mammoth in the quaint French Quarter. Along the way, the hotel has attracted an illustrious roster of guests including William Faulkner (whose biographer has written that the Monteleone was the author’s favorite hotel) and Tennessee Williams, who wrote about the Monteleone in his play The Rose Tattoo.

Truman Capote took Monteleone worship one step further when he claimed to have been born there during an appearance on The Tonight Show (in fact, Truman’s parents were living in the hotel while his mother was pregnant with him, but she gave birth in a nearby hospital). 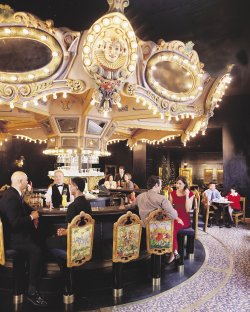 Such literary patronage prompted the Monteleone to name five luxury suites after writers who have stayed at the hotel and the Friends of Libraries USA recently designated the hotel a Literary Landmark—an honor shared only by New York City’s Plaza and Algonquin hotels and San Antonio’s Menger Hotel.

In a city that certainly loves its cocktails (even claiming to have invented the word), the Monteleone, and its famous Carousel Bar, is also a libation lover’s landmark. The bar, which is opulently outfitted to resemble a merry-go-round, makes a languid 360-degree revolution every 15 minutes. While you’re slowly spinning, the award-winning bartenders are busy inventing cocktails including the now-classic Vieux Carre and The Goody.

With all that history, it should come as no surprise that there are a number of  people who are reluctant to leave the hotel—even after they’re dead. Ghost sightings by staff and guests became such a common occurrence (especially on the 14th floor, which is actually the 13th floor), that the International Society of Paranormal Research camped out in the hotel in 2003 and claims to have confirmed the existence of more than a dozen resident spooks.

Too often, hotels with histories as rich (and long) as the Monteleone’s turn out to be fascinating, but faded beauties upon check in. However, the now 600-room Hotel Monteleone recently underwent a $65 million top to bottom renovation that poured an average of $75,000 worth of luxe touches (like marble baths and more square footage) and modern amenities (like internet access and safes large enough to accommodate a laptop) into each room. And it shows. The rooftop pool was also overhauled and is now a relaxing haven in the day, a romantic nook at night. The Aria Spa and a fully equipped gym (with spectacular views of the Mississippi River) polish off the thoroughly accommodating package. 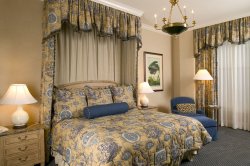 Service is also a priority at this family run hotel and that became apparent as Cori, the most helpful bell hop I have ever encountered, happily hauled an embarrassing number of bags up to my room in record time (and remembered my name and greeted me with a smile for the duration of my stay). The cheery, knowledgeable, fast and efficient service continued when I called the concierge to get the phone number of the nearby Acme Oyster House. She immediately informed me that a private party was being held there that night then called the restaurant and confirmed that, despite the party, I would be able to get a table in the front room—and a dozen of their spectacular raw oysters.

The Hotel Monteleone may not offer each and every one of the services and amenities that global stars like the new W in the French Quarter (which looks and feels like it could be in Miami Beach or Chicago) or the New Orleans Ritz-Carlton (which has been closed since Hurricane Katrina and plans to open its doors in December, 2006),  but if it’s the total quirky, freewheeling, sometimes dark one-of-a-kind New Orleans experience you’re after the Hotel Monteleone is the only address in town—the perfect cocktail of luxury accommodation with more than a dash of authentic local flavor.