The small but spectacular marvelous spatuletail hummingbird is a rare and impressive creature and the main attraction at the Huembo Reserve. The spatuletail is regularly seen at this private reserve in a unique environment in northern Peru, so we stopped by for some of the easiest and most unusual bird watching in the country. 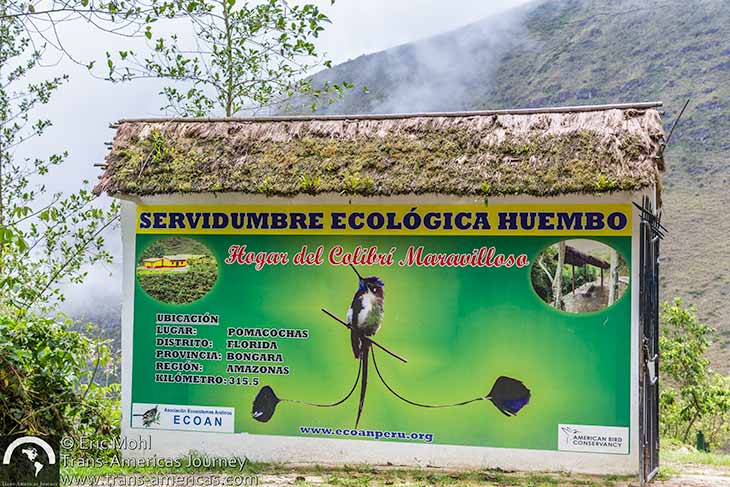 Started in 2007, in partnership with the American Bird Conservancy non-profit group, the 100 acre (40 hectare) reserve is owned by a local community, but managed by a Peruvian conservation group call ECOAN.

The Huembo Reserve, about a 30-minute drive from the town of Pedro Ruiz, protects land in the transition zone between humid mountain forests and dry valley forests. The reserve’s property was reforested with native plants and includes some jungle areas as well. The result is a paradise for endangered marvelous spatuletail hummingbirds, which are endemic to the region and found in few other places in the world. 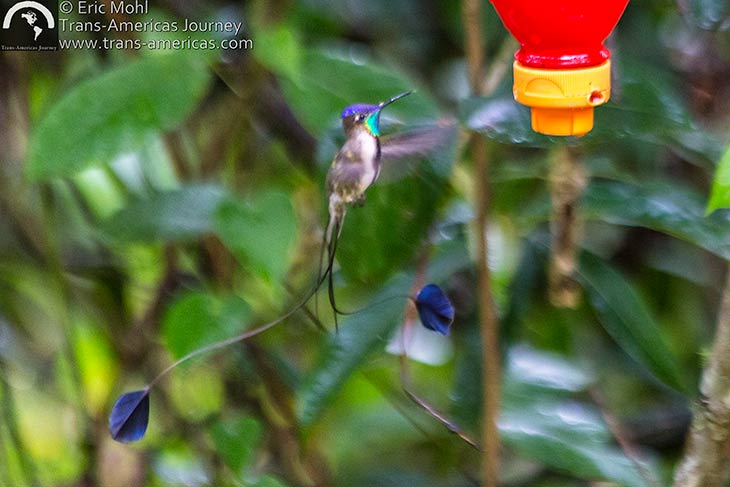 A male marvelous spatuletail hummingbird cautiously approaches a feeder at the Huembo Reserve. Note how small the bird’s body is compared to the size of the plastic bottle top of the feeder.

When we visited Huembo, there were six identified mating pairs of marvelous spatuletail hummingbirds (called colibri maravilloso in Spanish). The calling card of this bird is the four tail feathers of the male, two of which trail far behind the tiny bird’s body and end in a flat flare that inspired the name “spatula”. 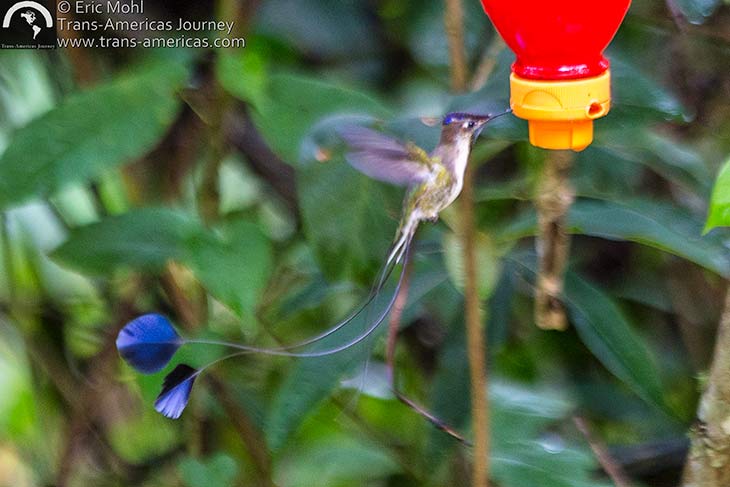 Those flat paddles on the end of two long tail feathers inspired the name of the marvelous spatuletail hummingbird.

Watching the spatuletails fly around with those tail feathers was like watching a vintage plane drag an advertising banner behind it. And we still don’t understand how the birds navigate through the dense foliage at high speed with those feathers trailing behind.

These flamboyant feathers are used to attract a female (which don’t grow the fancy tail feathers) during the specie’s mating season. We were told that during the mating season (December to May), marvelous spatuletail hummingbirds only appear in the afternoon. 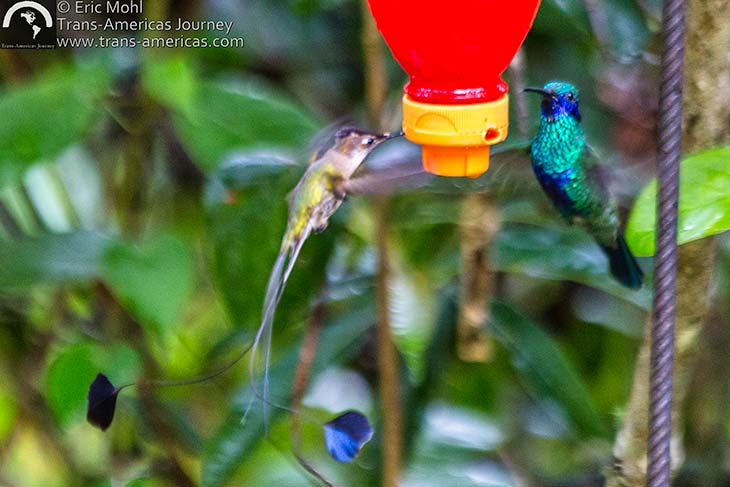 Marvelous spatuletail hummingbirds are smaller and more cautious than other hummingbird species in the area, like this much-larger sparkling violetear hummingbird.

We saw a marvelous spatuletail hummingbird within 10 minutes of sitting down on a bench near one of the feeders which are made from empty soda bottles. During the next hour, we had five more sightings of marvelous spatuletails which are faster and timider than other hummingbird species in the area. Their super small size (picture a particularly large bumblebee) means that spatuletails sort of sneak up on the feeders instead of dive-bombing them as the larger species do.

From left to right: a sparkling violetear, a chestnut-breasted coronet, and an Andean emerald hummingbird.

Other species of hummingbirds at Huembo include sparkling violetears, chestnut-breasted coronets, white-bellied hummingbirds, and Andean emeralds. Here are our best shots of some of those additional species. 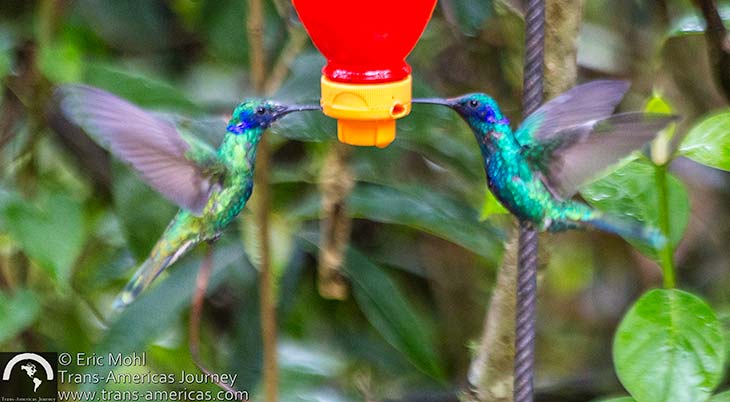 A pair of sparkling violetear hummingbirds at the Huembo Reserve in Peru. 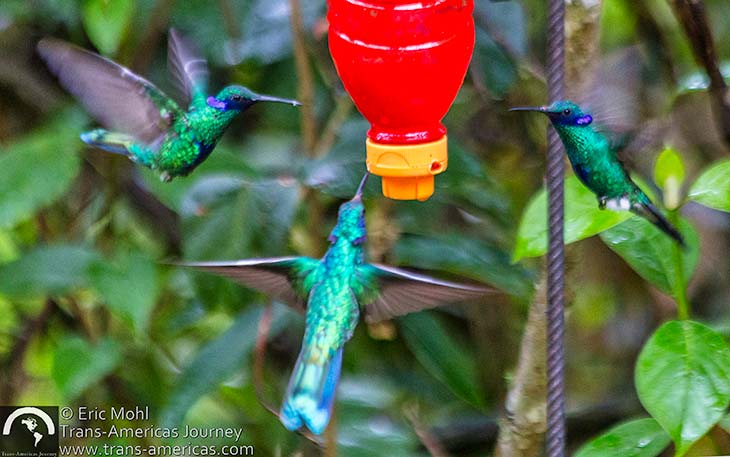 A trio of sparkling violetear hummingbirds at Huembo Reserve in Peru. 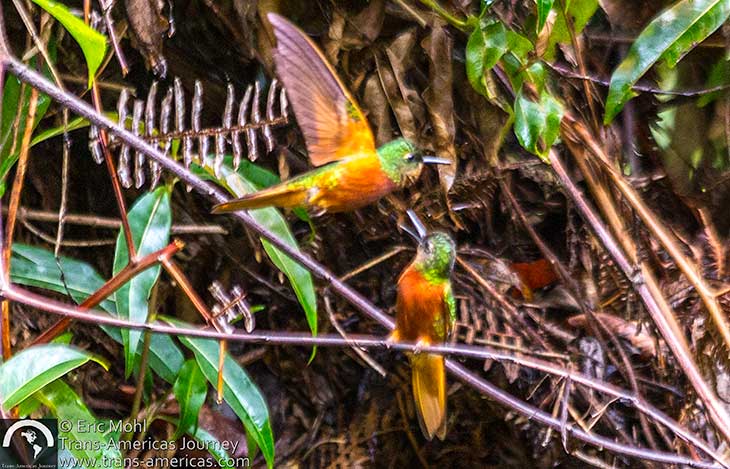 Two chestnut-breasted coronet hummingbirds take a break near a feeder. 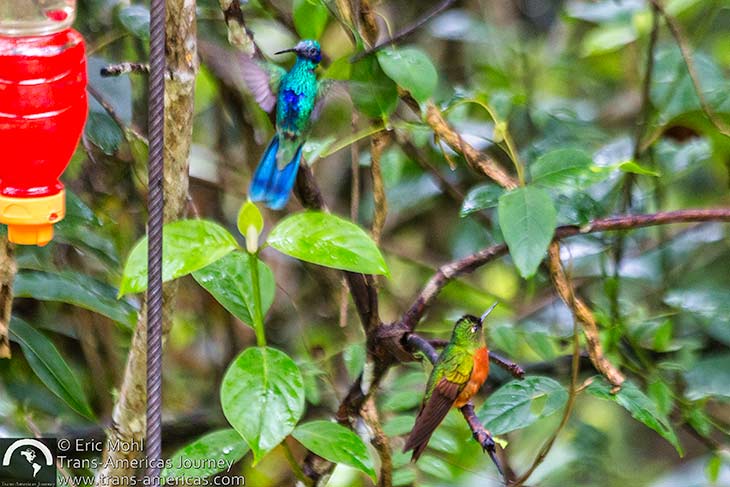 A sparkling violetear and a chestnut-breasted coronet stake out a feeder at the Huembo Reserve. 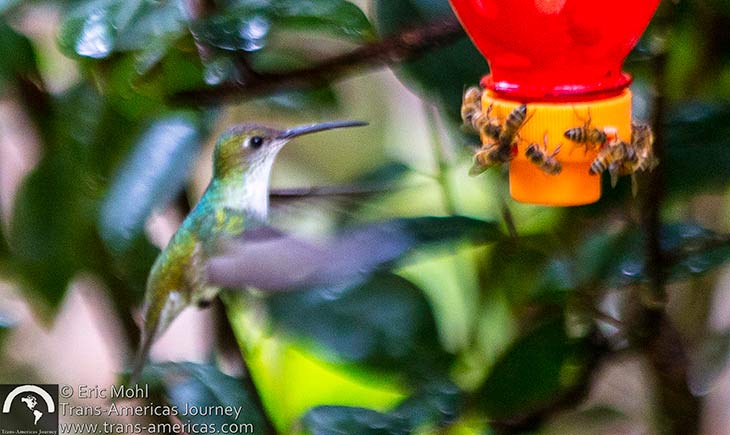 You can appreciate the small size of this white-bellied hummingbird in relation to the bees on the feeder. 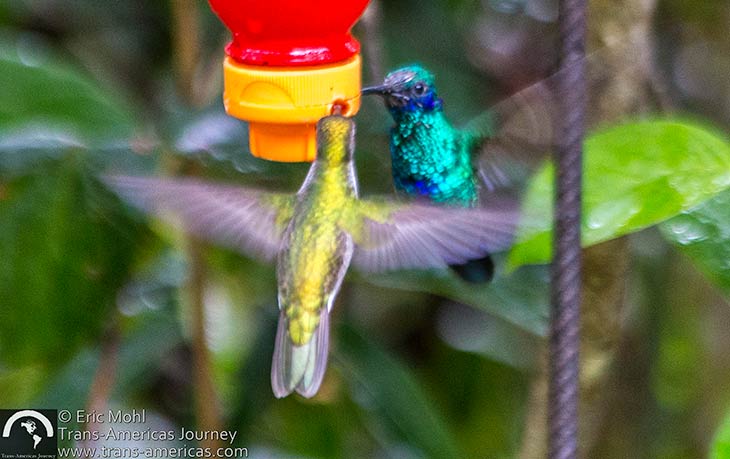 A white-bellied hummingbird (left) and a sparkling violetear hummingbird.

See the speedy interaction of these hummingbird species around feeders at Huembo Lodge in our video, below.

There are also a few trails and an observation tower at the Huembo Reserve in addition to a dining room and six basic but clean rooms with private bathrooms, electricity, and hot water for overnight guests.

ECOAN also operates the nearby Owlet Lodge which is another paradise for bird lovers. Here, you can see owls, quetzals, nightjars, antpittas, and more. Located at 8,000 feet (2,438 meters), the lodge has more than 3 miles (5 km) of trails, an observation tower, and basic, clean, and comfortable rooms for overnight guests including electricity and hot water but no TV, cell service, or Wi-Fi. Rates include meals which are served in a dining area with a wall of windows. There are hummingbirds here too (but no spatuletails) and the very popular feeders are re-filled every morning at 6 am.