Sunday is fun day in Juayúa (pronounced why-YOU-ah) along El Salvador’s Ruta de las Flores where, every Sunday, the streets around the main plaza in the center of town are closed to traffic and become packed with vendors selling all manner of treats.

The town of Juayúa in the valley with Apaneca, Santa Ana, and Itzalco volcanoes (left to right) in the distance.

Food for the body

Local residents, weekenders from San Salvador, and travelers pack together to wander past the offerings at this well-known Gastronomic Fair (Feria Gastronomica) where everything from paella to grilled meat to shrimp on skewers to freshly baked cakes are available. Ask the right person and you can still get iguana along with even more exotic (and illegal) foods. 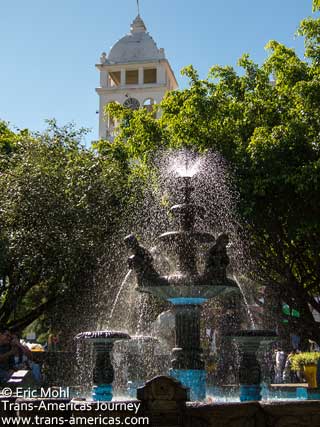 The main plaza in the town of Juayúa on El Salvador’s Ruta de las Flores. A famous food fair happens here every Sunday. 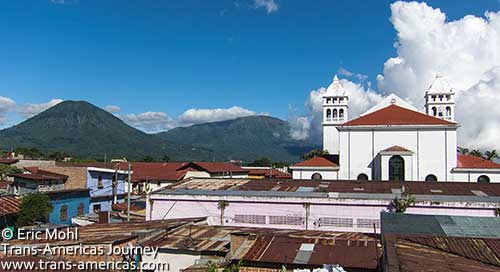 In Juayúa we stayed at Casa Mazeta Hostal where we got a private room (US$20 double) with a shared bathroom, use of a big kitchen, W-iFi, parking, and a lovely back garden. One afternoon we headed out from the hostel and walked to Chorros de la Calera, a rocky gorge with a waterfall that spills out of a rock wall and a swimming hole.

Sadly, the mile or so walk to the swimming area wanders along an increasingly bad dirt road increasingly strewn with garbage and lined with open drainage from the shacks along the way. The walk was not pleasant. 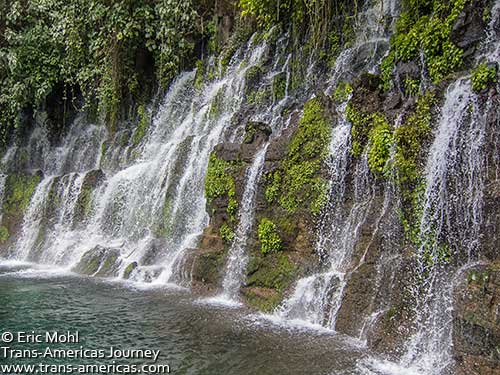 It’s worth enduring the litter-strewn trail to get to Chorros de la Calera waterfall near Juayúa, El Salvador.

Eventually the dirt road dead ended at a fence where we ignored the Private Property sign and continued through a gate. This property is owned by a hydroelectric company but Chorros de la Calera has become public property. Chorros de la Calera is essentially a wall of stone which is perfectly dry at the top but sheathed in water from about midway down thanks to springs that erupt right out of the rock.It’s the waterwall which man-made versions in hotel lobbies and expensive spas aspire to be.

A concrete retaining wall has been built below the cascade to create a deep, inviting swimming area. A creepy tunnel diverts water out one side of the pool then down to the power plant below. 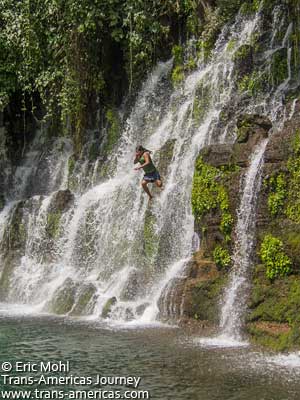 A Salvadoran cools off in the Chorros de la Calera waterfall near Juayúa, El Salvador.

Food for the soul

Believe it or not we managed to spend a year and a half in Mexico without ever catching a Day of the Dead (Dia de los Muertos) celebration. And we still haven’t seen a proper Day of the Dead blow out. However, we did catch All Souls’ Day in El Salvador. This holiday falls on November 2, the day after Day of the Dead, and also celebrates the memory of lost loved ones with a distinctly party-like atmosphere. 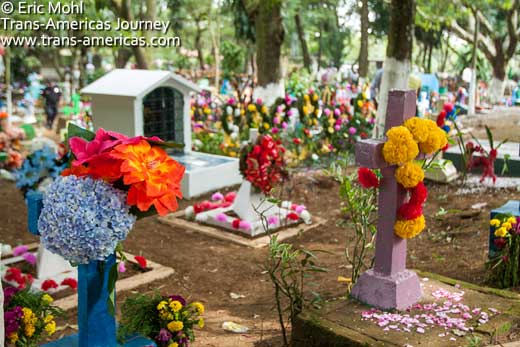 The cemetery in Juayúa, El Salvador all decked out for All Souls’ Day.

In Juayúa, the normally quiet small, wooded cemetery had been freshly painted and decorated with flowers and confetti. Families had set up chairs, brought containers of food  and established a festive air at the graveside of their dearly departed. Candy cane vendors wandered between gravestones. A mariachi band provided the tunes. 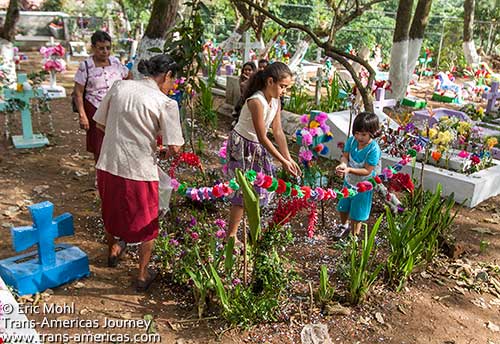 A family visits the grave of a loved one during colorful and festive All Souls’ Day celebrations in Juayúa, El Salvador.

The dead were being remembered in an appropriately festive spirit. Then it started to pour. 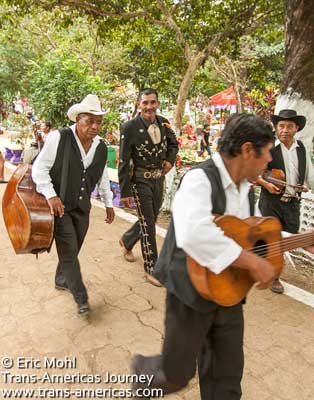 It’s not an All Souls’ Day celebration until the mariachi band shows up. 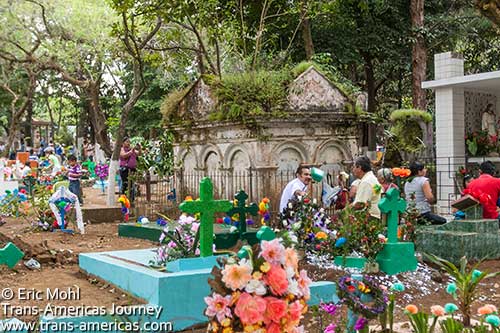 The cemetery in Juayúa, El Salvador all decked out for All Souls’ Day.

Check out some All Souls’ Day cemetery celebrations in Juayúa, El Salvador in our video, below.

The town of Nauizalco, about a 20 minute drive from Juayúa, has a night market at which, we were told, we could find delicious rabbit tacos. We have to say we were a bit disappointed, however. No rabbit tacos in sight and it turns out that a night market is pretty much the same as a day market, only darker. 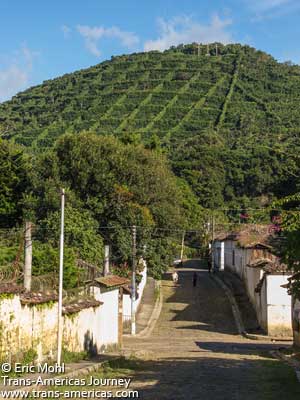 The intricate landscaping in this coffee plantation is meant to act as a wind break for the maturing coffee beans.

El Salvador’s Ruta de las Flores is famous for towns like Juayúa and for the coffee plantations and volcanoes that surround you every step of the way. Near the town of Apaneca, the crater of a dormant volcano has filled with water creating picturesque Laguna Verde. 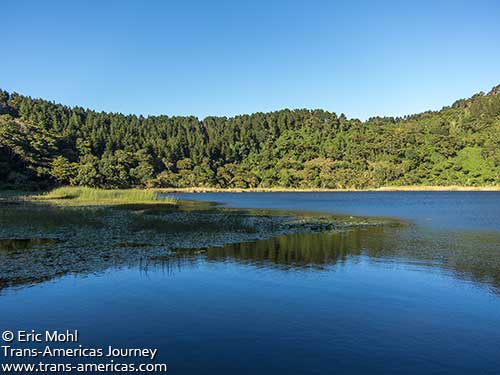