Merida, Mexico, in Yucatan State, is known as The White City. Some say the city earned this romantic nickname because it’s so clean and white. At its heart, however, Merida is a city of color and diversity and also home to a wide range of impressive hotels and a fabulous gay pride parade. It’s all in our Merida travel guide. 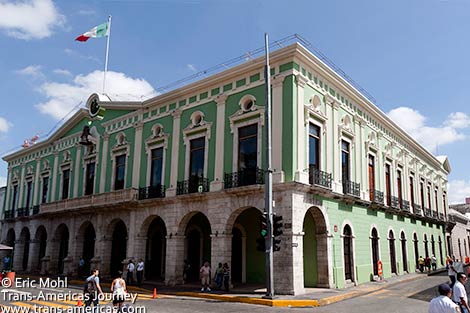 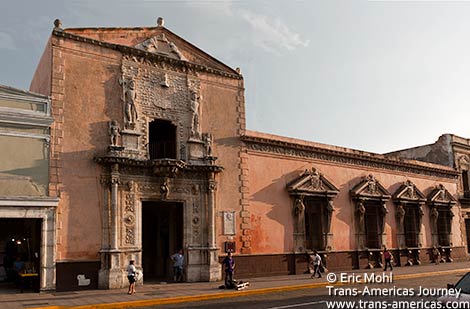 Casa de Montejo, once the home of Spanish conquistadors, is now a bank.

You can still see antique tiles on some street corners which depict an image and its name in Spanish—an attempt by the conquistadors to teach Spanish to the Mayans. Carved stones from the original Mayan buildings can be found in the walls and foundations of some of the oldest and grandest buildings in town. 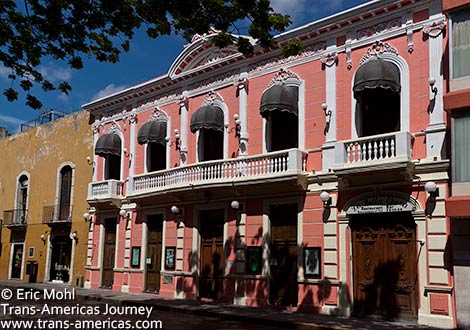 Despite its nickname as The White City, the streets of Merida are often bursting with color.

Today, Merida benefits architecturally from that early Spanish influence and a heaping dose of Eurocentric influence from Porfirio Diaz, the 19th century Mexican President/dictator who basically wished he was French. 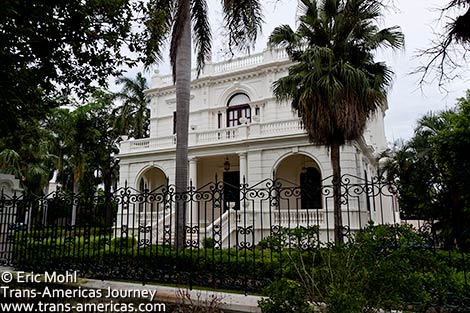 One of the many European-style mansions that line Paseo de Montejo in Merida.

Nowhere is Diaz’s influence more evident than on the wide boulevard called Paseo de Montejo which is lined with massive mansions built by families who’d grown rich growing sisal, also known as henequen. Many of them look like they were ripped right out of France.

The expat effect in Merida

An influx of full and part-time expats from the US, Canada, and Europe has also influenced the look and feel of Merida as they enthusiastically renovate and re-create homes and neighborhoods in the city. 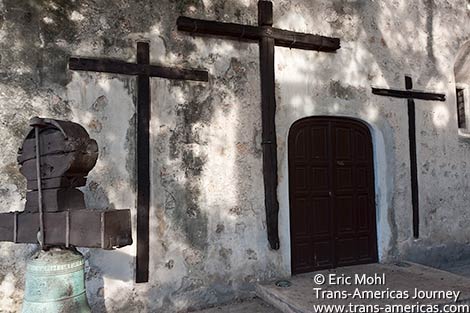 The preponderance of gringos has even hatched a small-scale slow food market every Saturday at which we purchased real sourdough bread. Pair that with the humus and olives and other Mediterranean delicacies for sale in Merida, thanks to a vibrant Lebanese community, and you’ve got yourself a picnic!

Not everyone is happy about the expats, however. We saw a sign that read “Watch out for US immigrants” and showed rocks being hurled at an old lady with a walker and an old man with a cane. Nice. 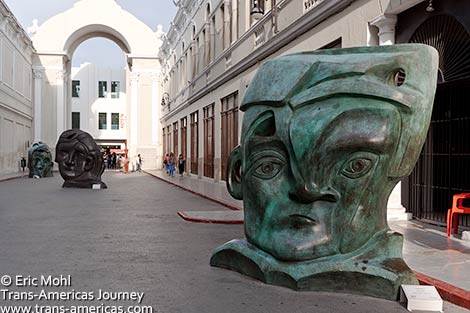 An outdoor exhibit at the Museo de Arte Popular de Yucatan in Merida.

By and large, Merida has come to terms with its new invaders both permanent and temporary. They even unleash a gang of tourism students called Turiamigos onto the streets of downtown Merida where they eagerly dole out directions, recommendations and general tourism advice in a variety of languages.

Merida has no shortage of places to stay including Rosas & Xocolate Boutique Hotel nd Spa (read our full review of Rosas & Xocolate) and Hacienda Xcanatun just outside the city.

If you’re on tighter budget, we suggest Luz en Yucatan which offers “amusing accommodations” (a range of spotless, great-value, stylish rooms and apartments) in a big converted home in the downtown area.

We spent more time on their site than we care to admit and it’s where we discovered that one of the rooms at Luz en Yucatan is named after a dearly departed iguana. The rate you pay ($50 –$94) is based on whether you are “not at all successful” “moderately successful” or “exceedingly successful.” We also learned that rooms are available by the night, week, or month, or, for the existentialists “they are available by the moment.”

We recommend that you go check out the site even if you’re not planning a trip to Merida. Yes, it’s that much fun.

Since Luz en Yucatan was full (it often is) we shacked up at Casa del Balam where the excellent service and super-convenient downtown location made up for a few frayed edges. 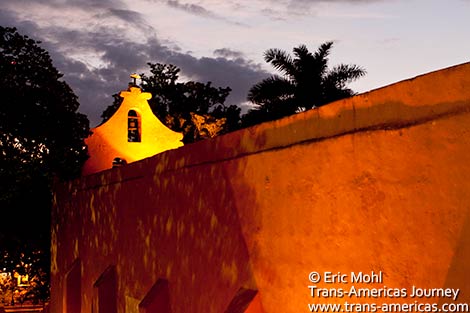 Tom Williams, the co-owner of Luz en Yucatan, showed us around town a bit and even gave us a sneak peek at an absolutely fabulous small private house with a pool that he and his partners were just finishing up near Luz en Yucatan. It should be ready to rent by the time you read this.

Tom also took us to a neighborhood bar, La Choperia, where we watched one of the World Cup matches, drank lots of Modelo on tap, and cheered like hell with a bar full of locals as Mexico beat France. 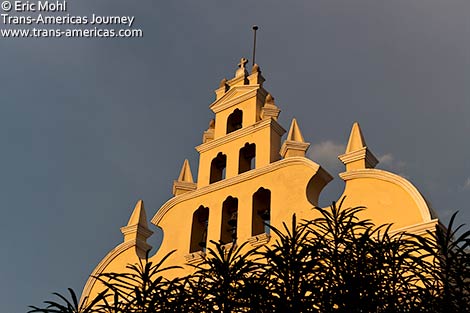 Beating the heat in Merida

It’s hot in Merida and during the heat of the day it can sometimes feel like the tourists and folks selling the hammocks, guayabera shirts, and other handicrafts the region is known for are the only ones dumb enough to be out and about. But once the sun goes down, the locals show up and make the most of cooler night air with outdoor neighborhood gatherings often include a live band of aging musicians playing Mexican classics in small neighborhood plazas as couples of all ages (and abilities) dance.

Check it out for yourself in our video, below and do not miss the wild interpretive salsa dude at the end.

At these gatherings, this city of one million reveals itself for what it truly is: a series of small towns (the neighborhoods) that just happen to rub up next to each other. The list of US cities that would benefit enormously if they had similar get togethers in their various communities is almost endless.

We got to see an entirely different kind of street celebration when we stumbled upon Merida’s Gay Pride Parade as it snaked its way around the Plaza Grande (which has free WiFi AND plentiful power outlets by the way) right in front of Catedral de San Ildefonso. 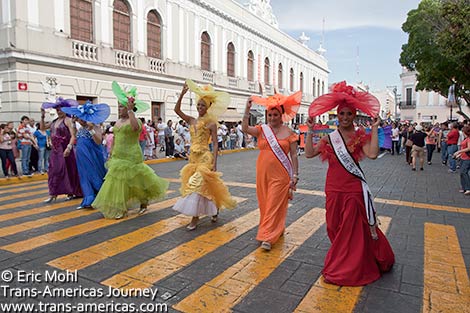 While New York City’s Gay Pride Parade, an annual LGBT extravaganza, has nothing to fear, the gay community in Merida (and some proud mothers) turned out in full regalia and their fun was impressive and infectious, and, we’re happy to report, entirely heckler-and-hate-free. 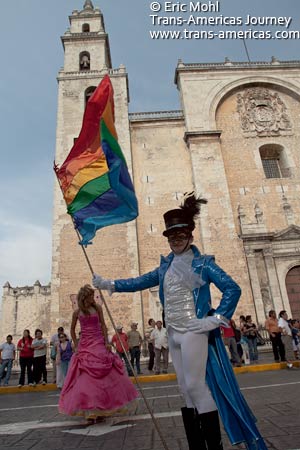 What we love, among other things, is the way this guy posed right in front of Merida’s main church, Catedral de San Ildefonso.

That’s all well and good but perhaps the best thing we gained from our visit to Merida is our rechargeable, made in China fly swatter/tennis racket mosquito zapper. At 70 pesos (about US$5), we consider it a quality of life investment. Get one of your own by going to the Win Fa Chinese restaurant near Plaza Santa Ana and asking the cashier for a Mosquito Racket. They’ll know what you’ve come for (thanks for the tip John and Melissa).

And if you’re into superlatives, there’s a pier in the nearby beach town of Progreso. That takes the cake. Completed in 1942, the pier is four miles (6.5 km) long making it the longest pier in the world.