The town of Mindo, about two hours from Quito, is a magnet for bird watchers, nature lovers, and travelers looking for an easy escape from the capital city into one of the most stunning natural areas in Ecuador. 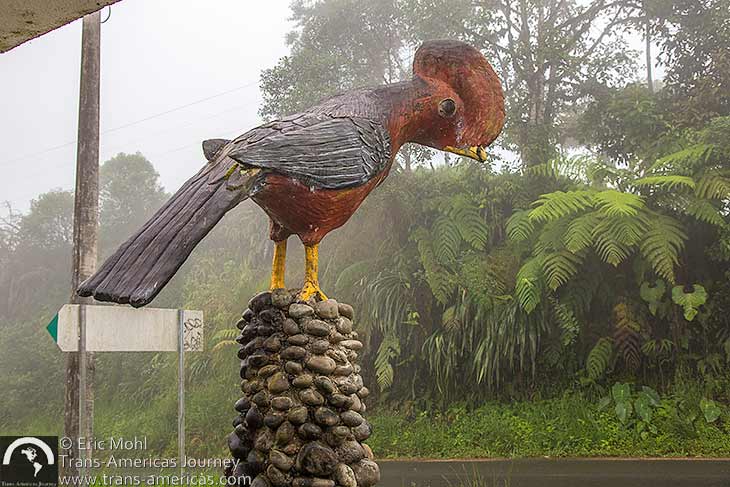 A massive statue of an Andean Cock of the Rock greets you as you enter Mindo, Ecuador.

The town of Mindo is located in the Mindo Valley on the slopes of the Guagua Pichincha Volcano inside the Mindo-Nambillo Reserve which protects the 47,444 acre (19,200 hectare) Mindo-Nambillo Cloud Forest. Considered to be one of the most biodiverse places on earth, this area is blessed with rivers, slopes, and dense rainforest and is home to thousands of species of birds, mammals, insects, and reptiles and bursting with plants, trees, and orchids.

What to do in Mindo, Ecuador

We visited Mindo twice. During our first visit, we tramped through the rainforest at night led by two passionate herpers from Tropical Herping in search of a critter called a Pinocchio lizard which hadn’t been seen for years. Find out if we spotted it or not in our story about that wet, dark, muddy adventure for the Dallas Morning News. 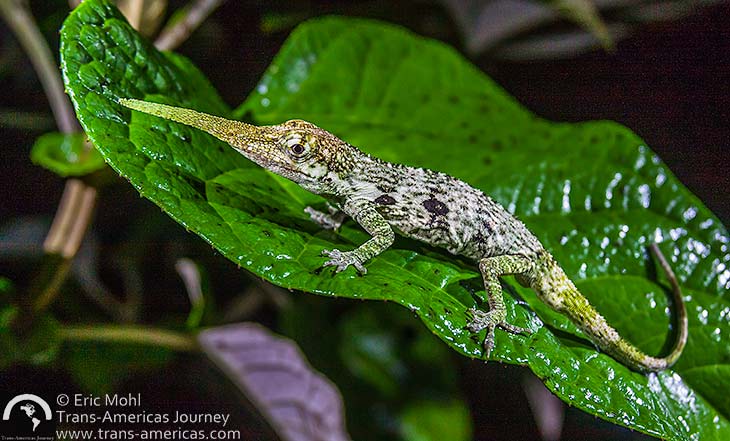 Can you guess what this creature is called a Pinocchio lizard?

Watch the Pinocchio lizard in action in our video from the cloud forest around Mindo, below.

Most people travel to Mindo to see birds, not reptiles, and our second visit to Mindo was very much focused on bird watching. Mindo is a favorite location for birders taking part in the Audubon Society’s annual Christmas Bird Count during which teams span the globe and spend a 24 hour period documenting as many species as possible in their designated area. Up to 400 bird species have been cataloged in Mindo during the event. Some experts estimate that as many as 600 species of birds may actually live in or migrate through the cloud forest around Mindo. 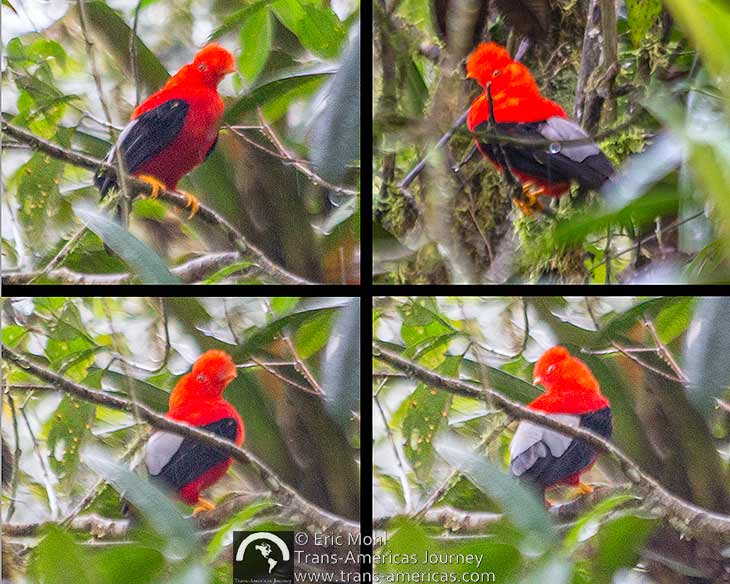 The many faces of the Andean Cock of the Rock.

Refugio Paz de las Aves, near Mindo, was created in 2005 by members of the Paz family with the goal of supplementing the farming family’s income. It started with one trail leading to a lek frequented by a flamboyant and hard-to-spot Cock of the Rock birds. 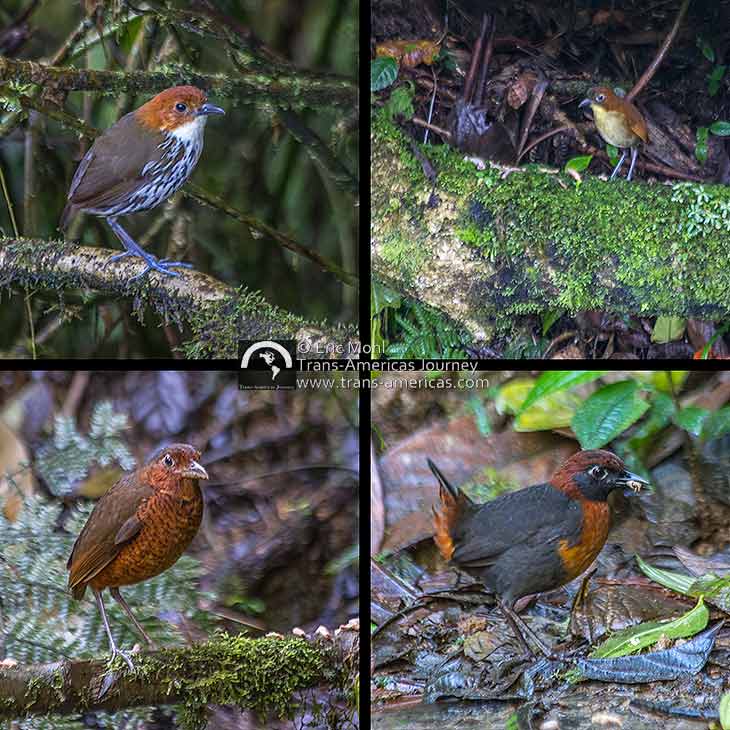 Sightings of the Cock of the Rock are frequent, but there are other things to see as well, including the rare and hard to spot Giant Antpitta. This long-legged and big-beaked bird (pictured above) is thought to only exist in Ecuador and southern Colombia and even in its known habitat it’s rarely seen.

However, at Refugio Paz de las Aves you’ve got a very good chance of seeing one. That’s because Angel Paz has sent years be-friending a few of the more gregarious birds and a few Giant Antpittas now come to him on the trail and even eat out of his hand. 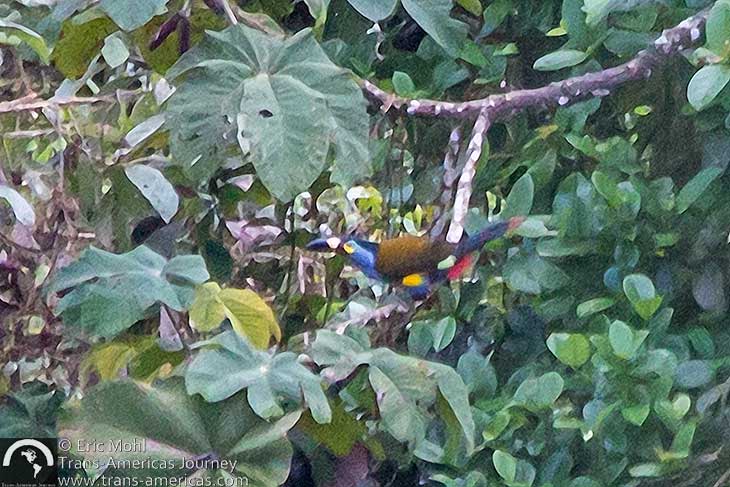 Colorful songbirds (tanagers, euphonias) fill the trees around the lodge, strange calls echo through the cloud forest, and there are now many trials to explore in search of feathered friends. We even caught a glimpse of a bird we’d never seen before when a Plate-Billed Mountain Toucan briefly appeared at Refugio Paz de las Aves. 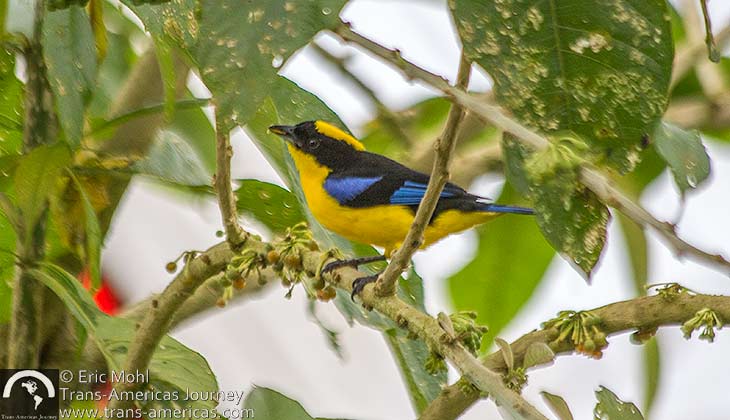 Not into wildlife? Take a coffee or chocolate tour. Look at orchids (there are hundreds of species of them in the area). Go hiking, horseback riding, rafting, rappelling, tubing, mountain biking, canyoneering or ziplining. Or find a cafe in town and drink a local craft beer.

Where to sleep in Mindo, Ecuador

There are a lot of backpacker hostels and jungle lodges to choose from in Mindo. Here are three options we can recommend.

Those seeking design and comfort at a reasonable price should head to La Bicok EcoLodge. French architect Sebastien Bougio left his architectural firm to travel overland in Central America with his family. During the journey, they found a piece of property for sale in Mindo and within a year their hotel was open. 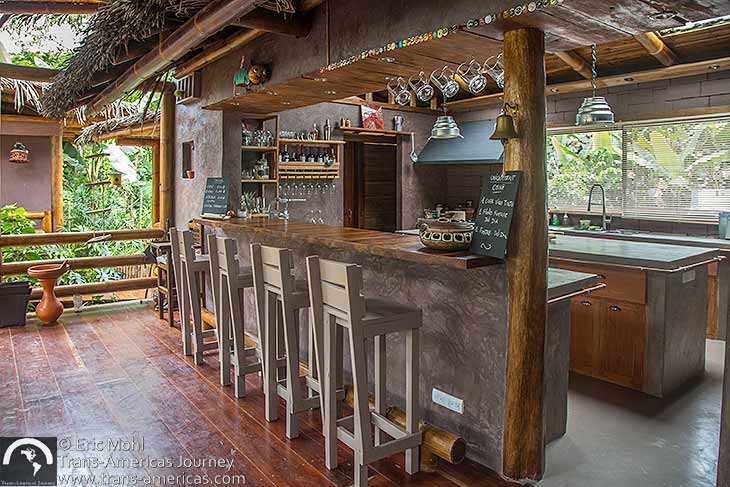 The six private rooms at Bicok come in a range of sizes and layouts and all are charming and stylish. The included breakfast is great including coffee (served the French way in big bowl-like cups), excellent house-made bread and pastries, and fruit salad. Open-air common areas feature an ash grey, white, and earth-tone palette. Guadua (a type of bamboo) features prominently and the open kitchen would make Martha Stewart envious. There’s a pool and camping is also allowed in addition to a few ample parking spaces with small porches and full hookups where overlanders are welcome to park and sleep in a nod to Sebastien’s time traveling overland. 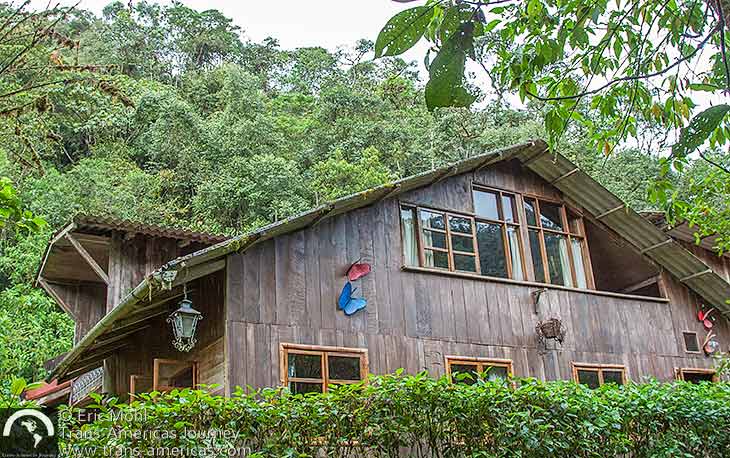 Nature lovers should head to El Septimo Paraiso Hosteria and Cloud Forest Preserve which offers 23 antique-filled rooms which are a big grandmotherly, but ultimately very comfortable. The food is great and, best of all, the hotel is surrounded by a big tract of protected land. 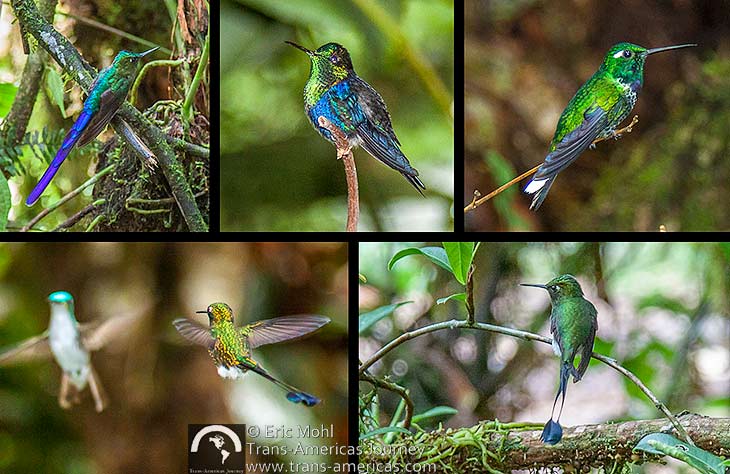 These are just a few of the hummingbird species attracted to the feeding area around El Septimo Paraiso.

Watch a hummingbird feeding frenzy at El Septimo Paraiso Hosteria in Mindo, Ecuador in our video, below.

There are plenty of hiking trails around El Septimo Paraiso and lots of wildlife.  The hotel’s hummingbird area attracts a ridiculous number of birds as well, yet just a fraction of the number of hummingbird species found in the Mindo area.

Even if you don’t spot the Pinocchio lizard, you will see other reptiles like these frogs.

Serious bird watchers should head to Refugio Paz de las Aves Lodge which offers four private rooms and three house-like suites for larger groups or families. But you won’t be in your room much. The real draw here is the range of birds to be seen around the lodge, as we discussed earlier in this post. 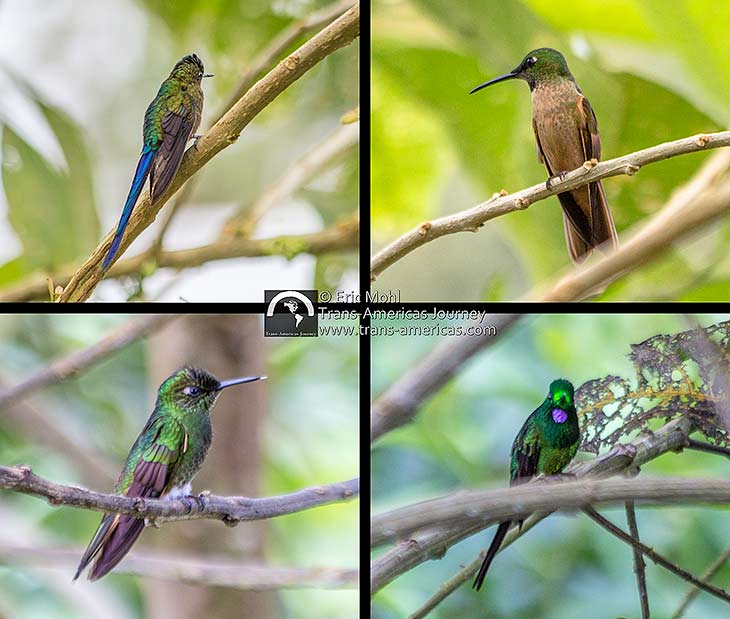