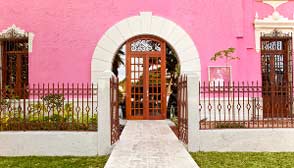 Don’t let the pepto-pink exterior of Rosas y Xocolate fool you. This 17 room boutique hotel in one or Mexico’s most vibrant cities is about more than just a flash of color (though pink and chocolate brown dominate, as the name implies). The hotel’s creator, Carlos Kolozs Fisher, is a hard-driving New Yorker who was in the textile business based in the Southern Mexican city of Merida. When he sold his business he “meditated on what to do next.”

While waiting for an answer, he came across a mansion on Merida’s Paseo de Montejo which is lined with massive homes built in the French style by rich sisal growers during the reign of Porfirio Diaz, Mexico’s Europhile President/dictator from 1876 to 1911.

“I have a compassion for these old buildings,” Carlos told me. “I’m an old soul.” 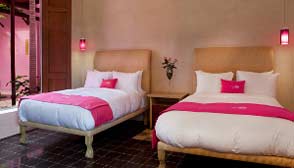 The mansion had stood empty for decades and was about to be purchased by a pair of Irishmen. When that deal fell through Carlos swooped in. “I had toured the buildings for fifteen minutes, but I felt something,” he says “I thought I’d restore it and live in it.”

That quickly turned into a plan to open a B&B. After Carlos purchased the neighboring mansion the plan evolved into Rosas y Xocolate—a design-centric (it’s a member of the Design Hotels) group), full-service luxury boutique hotel like nothing else in Merida.

The hotel opened in 2009 after more than two years of renovation, restoration and clever melding of the two mansions in the hands of prominent Mexican architect Salvador Reyes Rios (who was also involved in the restoration of the Starwood Haciendas). 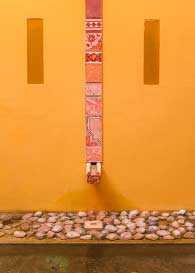 The result is a brash love-it-or-hate-it affair that boldly combines French doors, antique tiled floors, 14 to 20 feet ceiling, a modern suspended staircases, state-of-the-art entertainment systems, open-sky bathtubs and a meandering, multi-level design with arched passageways punctuated with modern art and sculpture. Almost every piece of furniture was custom made for the hotel and if you don’t like pink and brown, well, there are a few rooms that revolve around periwinkle, sage and turquoise. But color is everywhere so earth-tone junkies be warned.

The colors, the arches, the almost theatrical lighting, the labyrinth-like feel adds up to a Moorish-Alice-in-Wonderland effect that’s playful, elegant, modern and makes a refreshing change from the tendency toward traditional hacienda-style hotels in the area.

A narrow (but ingeniously incorporated) lap pool in an inner courtyard, a small spa and a well-equipped gym (with a full time on-staff trainer) are also on site, which is a good thing since there’s plenty to eat and drink. 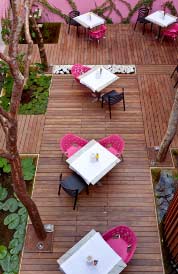 The hotel’s restaurant quickly became a destination for well-heeled locals who enjoy the tranquil indoor/outdoor setting and the excellent food (perfect chocolate croissants, an amazing wine list) as much as the guests. A circular staircase leads to Moon Lounge rooftop bar and an elegant clubby lounge off the lobby offers top shelf tequilas and not a shot glass in sight.

“This is my art,” says Carlos of his $5 million plus investment. It’s also his passion. The hotel’s name, he explains, comes from the fact that his mother’s name is Rose and chocolate is an important element for the Mayans (and most of the rest of us). Chocolate scented soaps in each room tempt as much as the best brownies and are the most richly scented beauty product I’ve ever encountered, including anything in the richly perfumed Lush line.

Luckily the hotel shop sells bars and elegant individual pieces of edible Ki’ Xocolatl chocolate (some mimicking the tiered construction of the Mayan temples that litter the landscape around Merida) made by Belgian chocolate maker Mathieu Brees. The shop is also where you’ll find shocking images of the mansions in almost total disrepair before Carlos and his team went to work.

But why no turn down service? I was looking forward to roses and chocolate on my pillow.

Rates start at: US$215 including full American breakfast