If you think mezcal is just nouveau tequila, you’re wrong. Here’s our master class in making mezcal in the Oaxaca Valley in Mexico including advice from one of Mexico’s most revered chefs. First rule: don’t call it tequila. 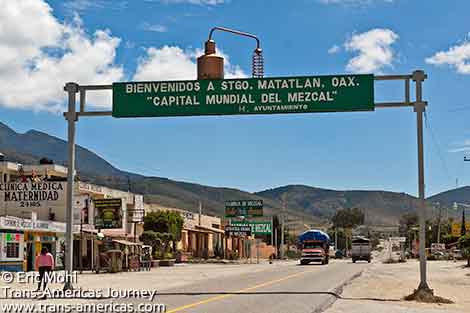 Greetings from the mezcal capital of the world.

We learned a lot about tequila during our 18 months in Mexico where we visited many tequila distilleries in the towns of Tequila, El Arenal and Atotonilco in Jalisco state. We dearly love tequila but down south in Oaxaca mezcal is king. Honestly, we thought much of what we’d learned about tequila could be applied to mezcal. We were about half right.

Celebrated Oaxacan chef Alejandro Ruiz has extensively “researched” the work of Oaxaca’s many mezcal makers in his quest to find the best artisanal sources to produce a signature mezcal which he serves at his wonderful Casa Oaxaca Cafe, Casa Oaxaca Restaurant and Casa Oaxaca boutique hotel.

“Tequila was good when it was still mezcal,” said Chef Ruiz archly as we climbed into our truck and followed him to the town of Santa Catarina Mineros (about 30 minutes from the city of Oaxaca) to find out more about this drink which inspires such fierce passions. 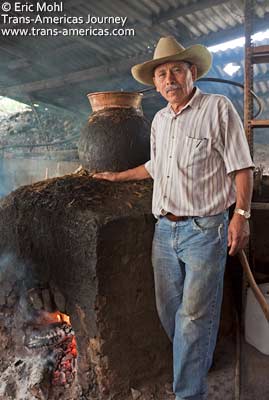 Lorenzo Angeles Mendoza of Real Minero at one of the traditional stills used in the final stage of his mezcal production.

When we arrived at the Real Minero small batch mezcal factory (called a palenque) it was immediately clear that like all good regional booze (wine, tequila, beer, scotch, etc) a large part of the quality of the drink comes from the ephemeral qualities imbued by the people who craft it.

Real Minero (one of Chef Ruiz’s three favorite mezcal makers) is run by the Mendoza family including daughter Graciela Angeles Carreño and her father Lorenzo Angeles Mendoza, a classic farmer who’s obviously much more at home in the dirt than at a desk. Together they produce about 80 gallons (300 liters) of Real Minero mezcal per month, all of it certified organic. 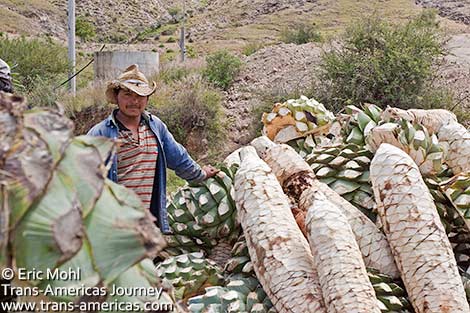 A worker sizes up harvested agave which will soon become delicious mezcal.

Mezcal is made using various types of agave (also called maguey). Most are organically farmed and can take up to eight years to mature. Once mature, the plants are harvested which kills the plant and the whole slow process starts all over again. Maybe the most fascinating (and certainly the rarest) type of agave used to make mezcal is called tobala and, incredibly, it is only found in the wild. All attempts to farm it have failed. 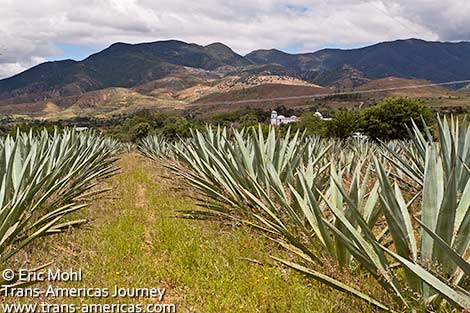 Mezcal makers (called mezcaleros) can choose to blend different types of agave to achieve the desired flavor, like blending different varietals to make a distinctive bottle of wine. The different varieties each have different flavors (woody, sweet, spicy, citrusy, etc.) and blending them is an art form. Because tequila is made solely from blue agave, there is no blending and tequila makers rely on the manufacturing process and the aging process to get specific flavors. 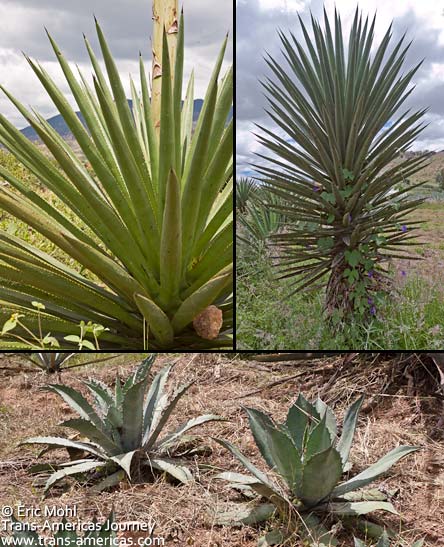 Three of the major types of agave used to make mezcal–on the bottom is a pair of tabala agaves which are only found in the wild.

Once the agave plants are harvested the long spike-covered leaves are carefully removed to expose huge cores called piñas (because the denuded cores look a bit like pineapples). The extremely heavy and dense piñas are hard and stringy and uninspiring but add a lot of heat to them and they start to reveal their true juicy, sweet, smoky, spicy flavors. 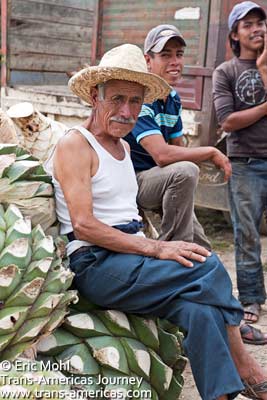 Young and old mezcal workers taking a break during the building of an in-ground agave oven.

While blue agave used to make tequila is most commonly cooked in above-ground ovens, cooking agave for mezcal requires a little more effort. First, you have to dig a big hole in the ground. Then you light a fire in the hole and cover the fire with big rocks. Once the rocks are super heated you cover them with wet agave fibers discarded during the manufacturing process of the previous batch of mezcal. 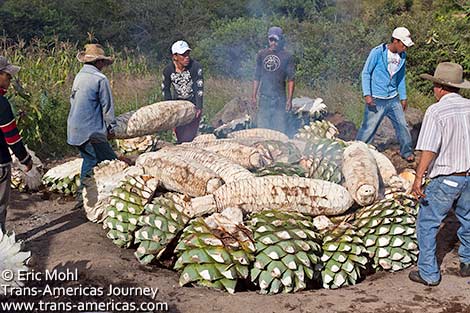 Workers carefully piece together the split hearts of agave in an intricate puzzle atop the in-ground oven that will cook them for up to five days.

Next, the fresh agave piñas are hacked in half and hoisted (with no small amount of effort) onto the growing mound where they are carefully positioned until they fit tightly together like a puzzle. More pulp and hot stones are used to close any gaps between the piñas, then everything is covered with tarps and burlap and plastic before being buried in dirt which is pounded down to create a nearly air-tight seal. 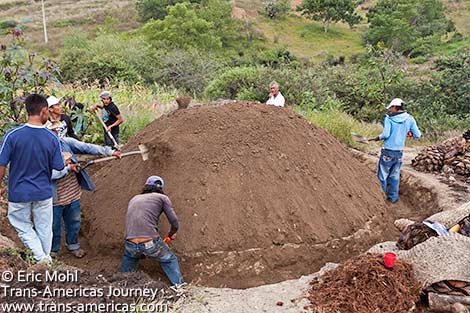 Workers cover two tons of agave in dirt to seal in the steamy heat of the in-ground oven which will cook them for up to five days.

A small opening is then made at the summit, like the mouth of a volcano, into which water is poured. The idea is to create and trap as much steamy heat inside the mound as possible since that’s what transforms the piñas. Once completed the piñas are left there to stew in their own juices for three to five days. It’s like a sweat lodge for booze.

Check out the craftsmanship (and some lighthearted mezcal fueled shenanigans) in our video, below.

We spent hours watching Lorenzo and his crew (he was using a neighbor’s oven site since he was in the midst of expansion work at his facility) build an intricate pyre which wasn’t complete until they drove a metal cross into the summit of the heap–part shepherd, part talisman. In the end, this pyre contained nearly two tons (1,800 kg) of piñas which is enough for just 40 gallons (150 liters) of mezcal. 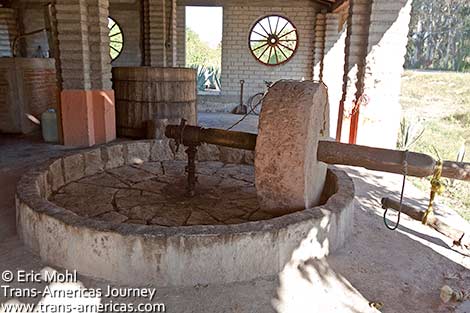 A traditional grinding stone used to crush cooked agave prior to fermentation and distillation. When in use, the stone is hitched to a mule which pulls it around in a circle.

The cooked piñas are then ground up to break down the fibers and the resulting mash is fermented in huge wooden barrels which reminded us of the barrels we saw during a tour of the Maker’s Mark bourbon distillery in the US. Fifteen to 20 days later the juice is drained from these barrels. This is called tepache and some very hardy souls drink this stuff. Most of us can find the patience to wait for it to be double-distilled over a period of about 35 hours. 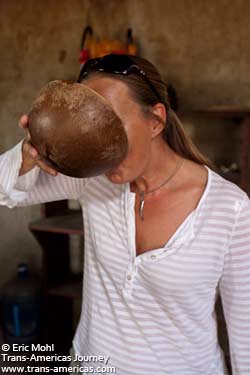 Karen tasting the goods at the Real Minero distillery still hot and direct from the still.

Real Minero is one of the few palenqas which still distills using the traditional so-called Filipino method which involves a clay pot above a wood-burning brick oven. It’s old-school, though the sawed off top of a two-liter coke bottle serving as a funnel to transport each delicious drip into a huge plastic water bottle was totally modern.

Ready to try some? Mezcal is available at any self-respecting bar in Oaxaca and throughout Mexico. 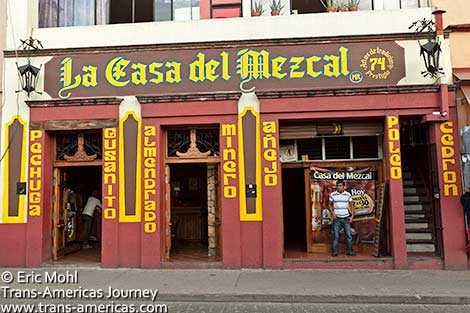 A mezcaleria in Oaxaca city.

If you can’t go to Oaxaca to find mezcal or visit Real Minero (or any of the many other small regional mezcal producers), then we suggest you check out Del Maguey. Founded in 1995, this company works with local mezcaleros in specific Oaxacan villages to produce what they call Single Village Mezcals. These uber-regional mezcals are USDA certified organic and OCIA certified organic and they’re delicious (we tasted their mezcals at a small office they maintain in Oaxaca city). 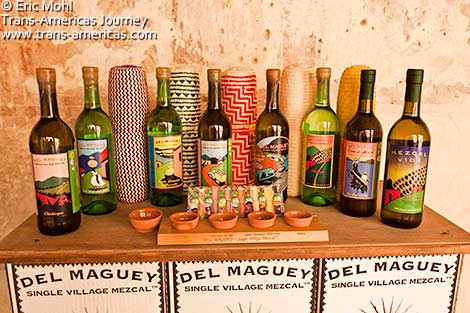 Oh, and that business about a worm in the bottom of the mezcal bottle? That’s purely for tourists and other amateurs and is in no way hallucinogenic or necessary.