Harder to reach and less well-known than other coffee region destinations, Salamina, which is part of Colombia’s elite group of Pueblos Patrimonios, offers travelers an unexpected stand of wax palms, the weirdest breakfast in Colombia, some quirky architectural touches, and a rich coffee growing heritage. 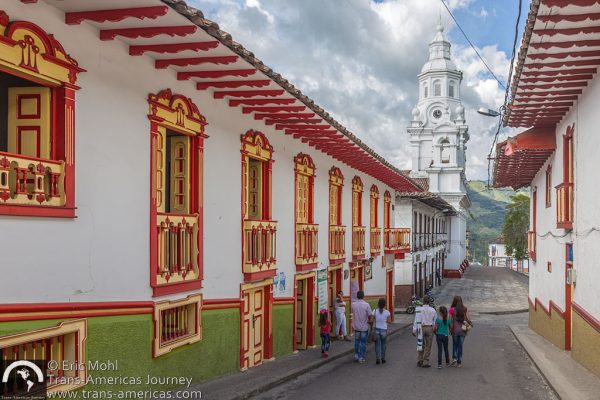 Salamina, reached via a mostly-paved and always scenic secondary road from Manizales in the Caldas province of Colombia, was founded in the early 1800s by a group which included women as well as men. The town is now home to roughly 20,000 people and is known for its coffee production (the crop flourished here even before other coffee regions took off). 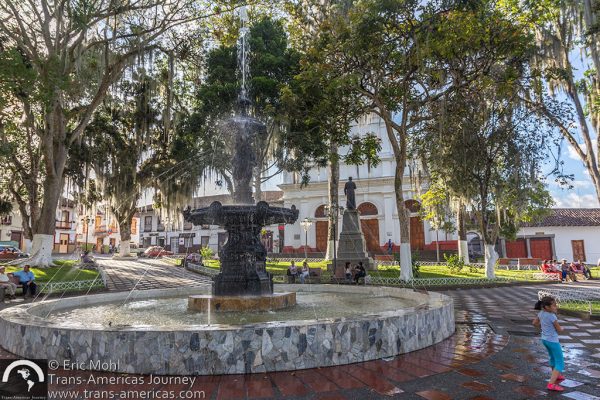 Salamina’s main plaza. The fountain came from France and was dragged over the mountains and into Salamina by mule.

Many of those pioneering coffee growers got rich enough to build city homes and many were influenced by a woodcarver named Eliceo Tangarife who developed an elaborate form of woodworking that can still be seen in distinct balconies, doorways, and window frames in Salamina. 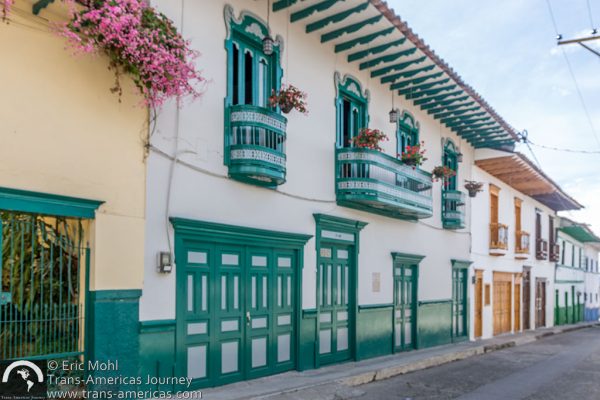 Wood carvers in Salamina, many inspired by carver Eliceo Tangarife, are famous for their elaborate balconies, doorways, and window frames.

We were invited into one of those traditional homes by its current owner, Fernando, who showed us his open central courtyard full of plants and wire orbs adorned with shards of glass which Fernando makes. They’re sort of DIY disco balls and Fernando says that when the moon is full he uses them to “make stars.” Fernando called Eric “maestro” and we’re pretty sure that many other elaborately carved doorways in Salamina lead into a world full of the same sorts of charm and charmers. 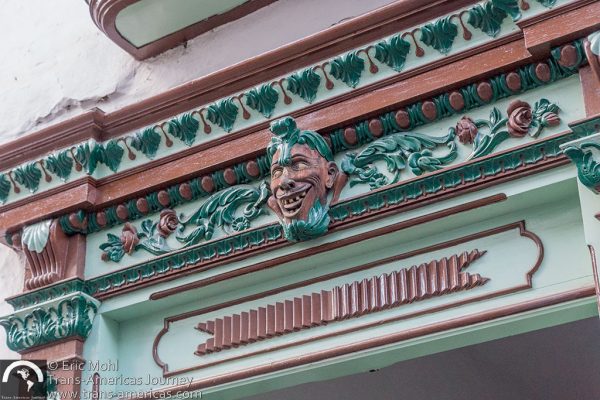 Some houses in Salamaina have a devil like this carved into the frames around their front doors. If you know why, don’t keep it to yourself.

The Masons played a role in Salamina’s formation as well and we were told that masonic symbols, including the iconic Masonic triangle with an eye inside of it, can be seen in the Basilica de la Immaculada Concepcion church on the main plaza. We looked and looked but never found the symbols. 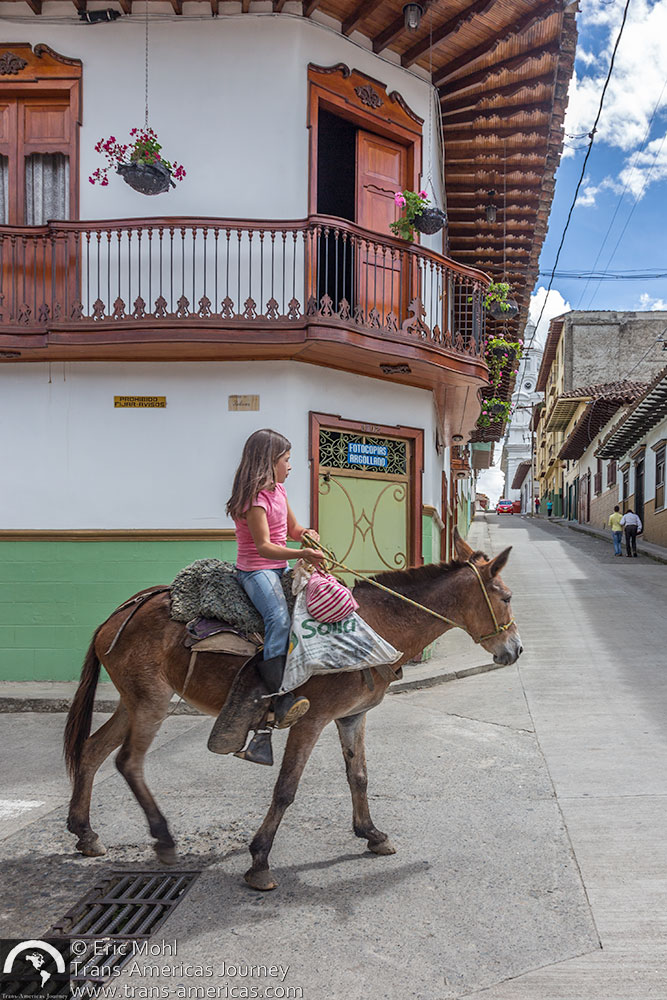 Salamina is still the kind of town where a girl can ride her mule around on a nice afternoon.

Years ago the owner of El Polo Bakery in Salamina devised a way to add eggs to his menu without buying expensive new kitchen appliances. Instead of cooking eggs in a pan on a range top (which he didn’t have), he used the milk steamer arm on his coffee machine to steam eggs in a coffee cup along with chopped hot dog and butter. The results, called huevos al vapor (steamed eggs), are still offered today (2,500 COP or about US$1.20). They’re hot, fluffy, rich and, yes, a bit weird. You can also order a side of macana which is a cup of steamed milk with butter, crumbled saltines and cinnamon.

Huevos al vapor taste better than they look, though don’t expect service with a smile.

Everyone talks about visiting Salento to see stands of rare wax palms, the tallest palm in the world and the national tree of Colombia. You certainly can see beautiful wax palms in the Salento area (though the best wax palms in Salento aren’t where you think they are). We were surprised to learn that Salamina has some grand stands of wax palms as well. 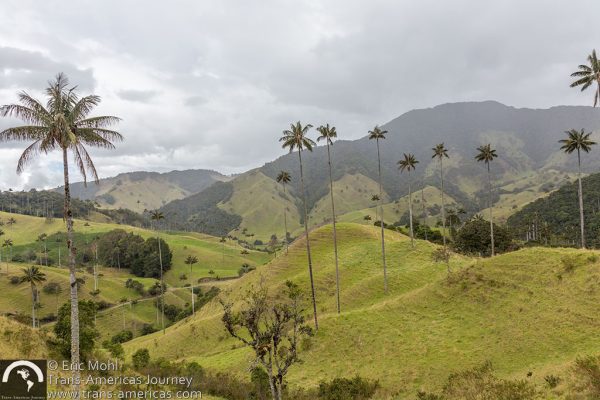 The town of Salento is famous for its stands of wax palms, the tallest in the world and Colombia’s national tree. But Salamina has some stands of palms nearby as well.

Seeing the wax palms near Salamina requires a two hour drive from the town up to around 10,000 feet (3,000 meters) where, suddenly, the remarkably tall palms begin to appear–a few at first, then the cattle fields are peppered with them. There are no organized trails or circuits. Just park and wander through a pasture to admire the palms. 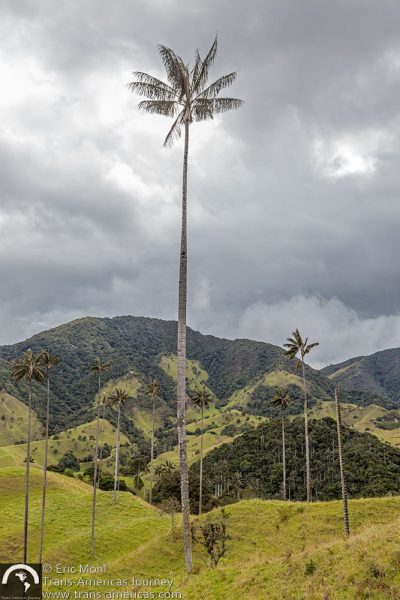 As we were doing just that, a local farmer pulled up on his motorcycle and invited us to his small nearby farm where he has 20 cows, some sheep, potato fields and a trout pond. When we arrive at his farm his wife greets us with hot cups of sweet Nescafe, a welcome bit of warmth in the foggy cold. We sip and talk in her stove-warmed kitchen with views of the mountains and fields. It’s the kind of kitchen that makes you want to cook and do the dishes.

Their son is urging them to open a small homestay and we hope they do it. Their farm is tranquil and atmospheric and they are the kind of generous farmers who built Salamina. We didn’t want to leave. 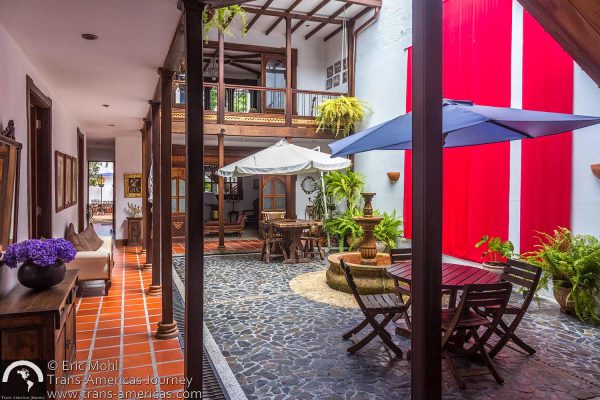 Where to sleep in Salamina

In Salamina we stayed at La Casa de Lola Garcia Boutique Hotel which was opened by Mauricio Cardona Garcia, the great grandson of one of the town’s Masonic founders. Mauricio opened the stylish and central hotel after renovating his aunt Lola’s two-story house. There’s an open air courtyard, an open kitchen, and a back garden with a Jacuzzi (180,000 COP or about US$59 double occupancy including breakfast and use of all facilities). It’s the most stylish hotel in Salamina.
Book Now