Our first stop in El Salvador was Suchitoto, a town that absolutely embodies the resilient, independent, and proud soul of the country. 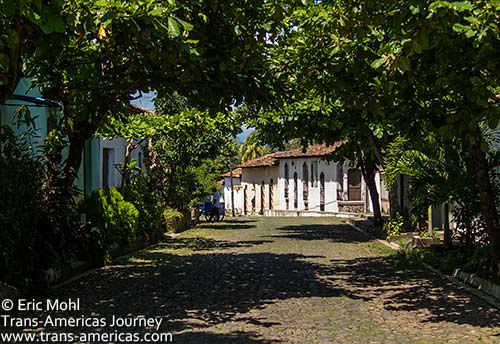 Yes, the streets of Suchitoto, El Salvador are this story book perfect.

Our first stop in El Salvador

“Le estress.” We heard this more than once as the reason why El Salvadorans come to Suchitoto, 28 miles (45 km) from the hectic capital city of San Salvador. Despite the atrocities that occurred in this area during the civil war, modern Suchitoto (which everyone abbreviates to just Suchi) is a blissfully stress free town with the power to make you that way too. 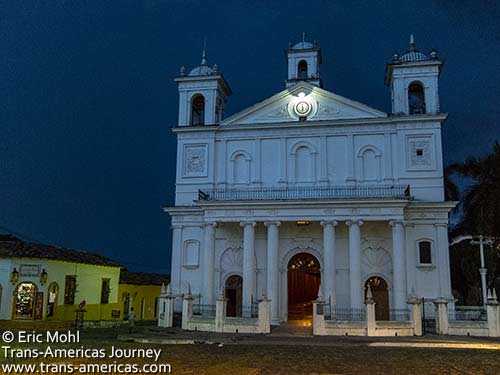 Evening in the square in Suchitoto which is anchored by the architecturally and artistically unusual Iglesia Santa Lucía.

Bright green grass sprouts up between time-worn cobblestones in the streets. Rotund, apron-wearing ladies sling pupusas and fried plantain chips around the small town square. Shops open and close when they feel like it. The already languid pace slows down even further as the temperature rises. 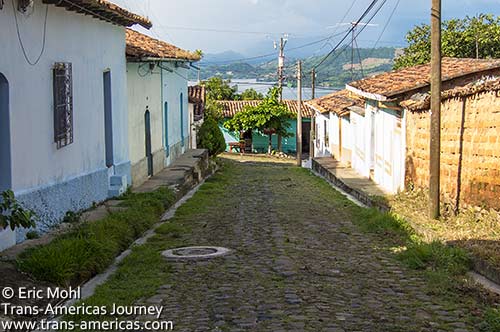 A cobblestone street descends through the town of Suchitoto, El Salvador toward enormous Lake Suchitlán.

Over time, Suchi has attracted a mix of Salvadorans, expats, and international NGO workers and that combination gives the place a bohemian vibe. We met just a fraction of the fascinating characters in Suchi and each one enriched our experience. Suchitoto actually reminded us of what Antigua, Guatemala must have been like 50 years ago before all the retired gringos arrived bringing their gated communities and sushi restaurants with them.

The Spanish settled the Suchitoto region in the early 1500s and used it as a base to extend their land grab across the region. Subsequent waves of wealthy Salvadorans added more elegant, traditional structures to the town which flourished through the indigo trade and agriculture. Against all odds (earthquakes, a massive dam project, civil war), the historical charms and traditional buildings of Suchitoto have survived. 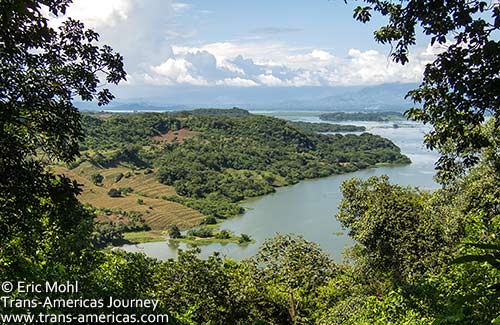 Lake Suchitlán, below the town of Suchitoto, was created by a dam project in the 1970s.

In the mid 1970s, the government built the Cerrón Grande Hydroelectric Dam across the Lempa river, creating Lake Suchitlán which submerged vast tracts of the best farmland in the country. Farmers were offered US$100 per hectare to relocate and find another way to make a living.

When civil war broke out in 1980 the villages around Suchitoto were almost immediately targeted. Residents were (and are) staunch supporters of the FMLN, which formed at the beginning of the war as a coalition of five left-wing guerilla groups united in opposition of government forces.

But by this time Suchitoto was a town in decline and basically abandoned. The lack of FMLN targets and the presence of an imposing military garrison spared the town. Not a single bomb was dropped on Suchitoto even as villages just a few miles away were obliterated. Some locals say the war saved Suchitoto. 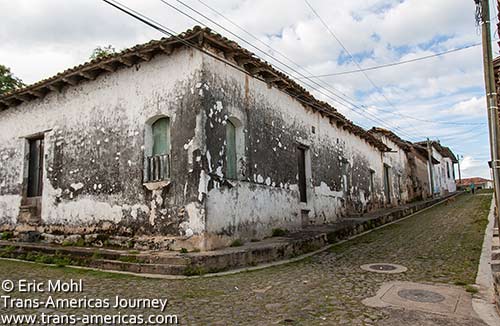 It’s something close to a miracle that the unique architecture of Suchitoto was not destroyed during El Salvador’s 12 year civil war which raged all around the town.

The arts are alive too

Locals told us that 150 years ago there were 40 pianos in Suchi. A Canadian Shakespeare company has an ongoing relationship with the Es Artes theater group in Suchi where the bard’s plays are regularly staged. There are artists’ studios and galleries throughout town. Everyone seems to paint or make jewelry or act. 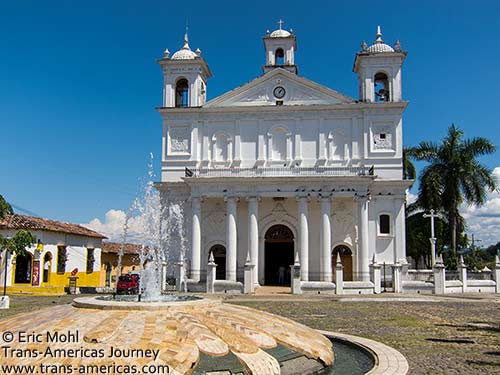 Suchitoto’s Iglesia Santa Lucía has a dome covered in plates, odd pillars out front and cherries painted on the ceiling inside.

Even Suchi’s pretty little Iglesia Santa Lucía church is more artistic than usual. There are six unusual columns at the entrance. The dome is partly tiled with porcelain plates donated by a bride who was married in the church. Inside, the usual gold gilt and other expected flashy odes to saints are replaced with earth tones, carved wood and simple paintings of flowers and cherries. Yes, cherries. 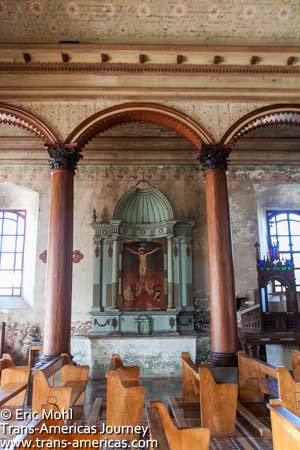 We were so charmed by Suchi that we didn’t really mind when Tropical Depression 12E arrived, washing out roads, raising the level of Lake Suchitlán alarmingly and making it smart to stay put. The storm basically parked itself over El Salvador, dumping up to 58 inches (1,470 mm) of rain in just nine days. That’s about 80% of the rain that normally falls on El Salvador in an entire year.

Our unexpected rain delay gave us time to really explore Suchi (in between downpours) and here are our recommendations for your visit.

They don’t call Hotel Los Almendros de San Lorenzo one of the best hotels in El Salvador for nothing. Huge rooms in a meticulously restored house, an eclectic art collection, lovely pool, great restaurant, and fascinating hosts (one is a Frenchman who left his job in Paris, the other a former ambassador from El Salvador who retired from service) are just a start. Their detached and super private room is called El Nido (The Nest) and it’s got its own plunge pool.

Nothing comes close to Los Almendros, but there are other good hotel options in Suchi. We stayed at Villa Balanza which has five rooms in a house locateddown a very steep hill toward the lake. Two rooms have private bathrooms but we opted for one of the three upstairs rooms that share a bathroom but have awesome views of Lake Suchitlán. For US$20 a night it was great and gets bonus points for good Wi-Fi and a big kitchen for guests to use.

The newest accommodation in town belongs to Miguel Huezo, owner of Suchitoto Tours and a wealth of information and assistance about all of his beloved El Salvador. Miguel just opened Hostal Juan Palancapa with two private rooms with hand-carved wooden beds, ceiling fans, private bathrooms with hot water, and broadband Wi-Fi (US$25 single; US$40 double including full breakfast). A camping deck, with views over Lake Suchitlán, is nearly complete and will have four tent spots with shared bathrooms and showers (US$10 per tent including full breakfast). Look for Hostal Juan Palancapa a few doors down from restaurant Fonda El Mirador.

Warning: most of the hostels in Suchi are pretty skanky. A fellow traveler who is not usually very picky about where he sleeps was rightfully put off by the leaky roof and rats in his room.

History preserved on the doorstep of a home in Suchitoto, El Salvador.

Our thanks to Miguel Huezo for taking us to Guazapa Café about2 miles (4 kilometers) out of town. Lush grounds, great service, awesome food (including rarely seen treats like grilled vegetables), and fairly reasonable prices (US$7 to US$13) for some of the best grilled meat we’ve had. Sadly, they were out of their famous coffee flan when we were there.

Luita’s del Portal, on the square, offers gourmet versions of pupusas, the national dish of El Salvador. At Luita’s you can get your pupusas filled with roasted garlic and basil (US$1.50 each) or cheese and spinach instead of the usual pork or squash. Not that there’s anything wrong with the traditional pupusas served across the square for a third of the price which is what we ate at least once a day.

You can feel good about your meal at Pajaro Flor which is run by a local women’s cooperative. Lunch is cheap and delicious, just be sure to arrive by 12:30 pm. They run out of their home made meats, vegetables, soups, and rice early. 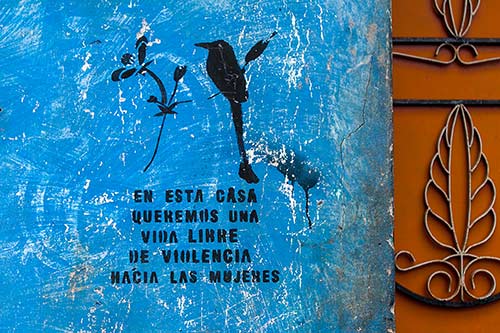 We were surprised by the strong feminist side of Suchitoto which included these stencils which are on nearly every structure in town proclaiming the place free of violence against women.

Somehow we never quite got around to trying a dish called Gallo en Chicha which is chicken marinated in a corn-based fermented liquid. We are assured that is more delicious than we just made it sound. Thanks to our friend Marite, we did try a local delicacy called nuegados con chilate.

Marite took us into Suchi’s rambling market building to visit her favorite vendor of this sweet snack. Look for a big pot of bubbling oil and a stack of coconut shells which are used as cups for a ginger and nutmeg infused corn-based beverage which looks like old dishwater but is actually the perfect foil for the rich dough balls, not unlike dense versions of beignets, in a thin, sweet sauce. 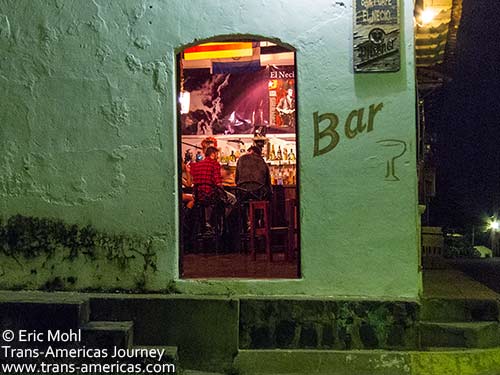 El Necio bar where the drinks are cheap and revolution is alive.

There is no place in the world like El Necio bar. The name is taken from the first nickname given to Ernesto “Che” Guevara and this place, decorated with FMLN posters and munitions (some live) left over from the civil war, is a wonderful combination of a revolutionary bar in Havana and a Lower East Side dive in New York. Plus drinks are US$1.50. 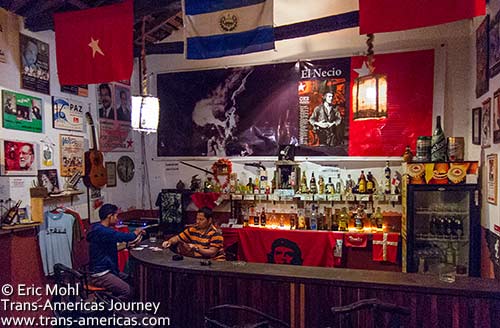 Name your revolutionary–he or she is probably represented inside El Necio bar in Suchitoto. And be warned: some of the munitions are still live.

On Friday and Saturday nights Mowy Disco, run by the Sanchez brothers, fires up the party machine in a huge two level indoor/outdoor building with a massive sound system and views down to the lake (US$2 cover and US$5 for an ice bucket with six beers in it).

Some of the artists in town will sell you treasures straight from their workshops or studios and formal galleries are found all around town. The chicest is Galeria de Pascal across the street from the Los Almendros hotel and run by the same people. Splurge-worthy  sculpture, paintings and more fill a roomy gallery which hosts rotating shows and an adjacent shop sells finds from across Central America.

A smaller investment can be made at a well-curated store called Papalotl owned by a powerhouse of a woman named Magali. When we were in Suchi, Magali was about to open an outdoor coffee shop behind the store on a breezy bit of land with a million dollar view of the lake. Her nice selection of local, hand-made items includes jewelry, bags, shirts, hammocks, candles and more all at good prices (US$20 hammocks, US$15 bags).

Even more culture in Suchitoto

For a town this small, Suchi has a shocking number of museums, some worth your time some not so much. We had high hopes for great kitsch at the Museum of 1,000 Plates, for example, but despite its name there were really more like 300 plates on display and most of those were easily outshined by what some of us have lurking in the deepest depths of our kitchen cabinets.

We skipped the Museo La Moneda (Museum of Money), though that’s your best chance of seeing a UDES, the official currency of Suchitoto. It’s still legal tender, though no one uses it anymore. 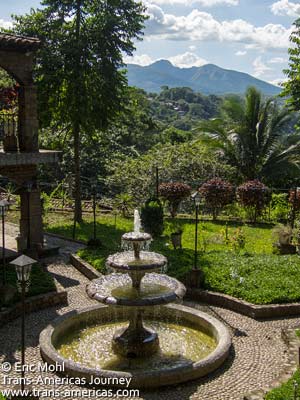 Despite the ticket price (US$4 per person, said to be the steepest in the country), we decided to visit the Casa Museo de Don Alejandro Cotto and we’re glad we did. Suchitoto native Don Alejandro Cotto, a famous filmmaker, patron of the arts, political agitator and general renaissance man, donated his mansion and vast garden to the city.

The aging icon still lives in part of the house but most of the rooms have been turned into spaces to display photos, artwork, newspaper clippings and other remnants from Cotto’s fascinating life.

Don Alejandro himself showed us around (Spanish only) which really brought this 3-D scrapbook to life. Opening hours are erratic so call ahead (2335 1140).