Antigua, Guatemala is well known as the town that hosts one of the world’s biggest and most colorful religious festivals. Holy week, or Semana Santa in Spanish, is celebrated with elaborate but temporary street carpets, and lots of somber processions in which hundreds of the devout carry enormous floats through the cobblestone streets all in an effort to recreate the persecution, crucifixion, and resurrection of Jesus Christ. But there are plenty of other wonderful reasons to travel to Antigua any time of the year including great food, hotels in all price points, colonial architecture, active volcanoes, and day trips. And it’s all in our Antigua travel guide.

The Arch of Santa Catalina serves as a gateway into Antigua, Guatemala.

The churches of Antigua, Guatemala

There are at least a dozen churches in Antigua and at least half are in ruins thanks to the area’s seismic activity. We are not going to show you every single church in town. Suffice to say that each is unique and atmospheric, especially the ruined ones which have a sort of ancient Roman feel to them. 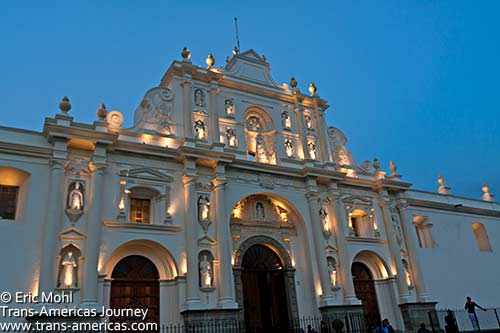 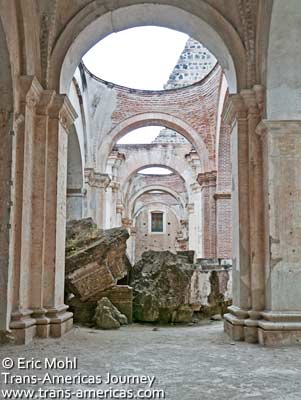 These are the ruins of Antigua’s original Santiago Cathedral. 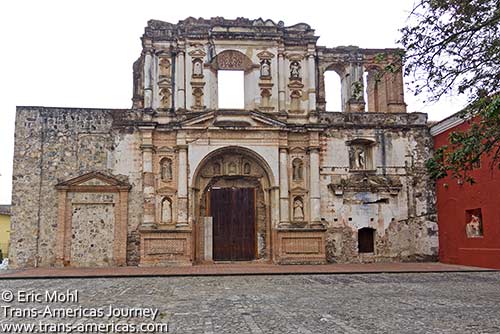 The ruins of Compania de Jesus in Antigua, Guatemala. 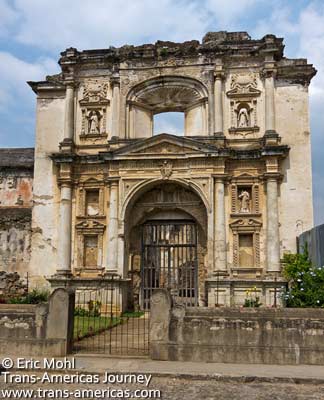 The ruins of the Santa Teresa church in Antigua, Guatemala. 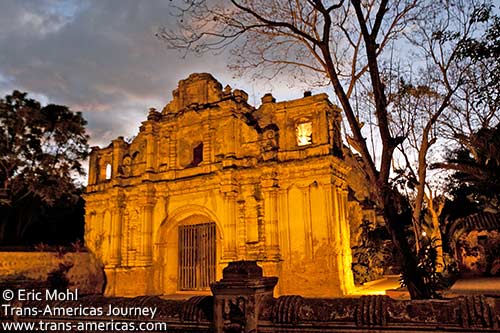 The ruins of San Jose church in Antigua, Guatemala. 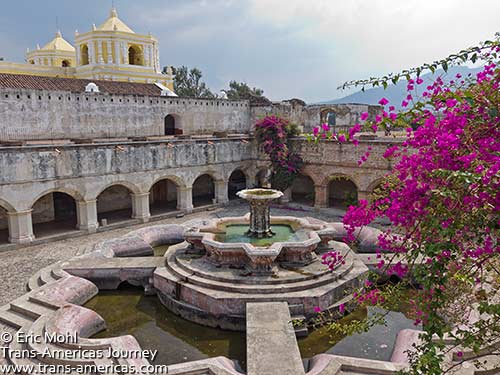 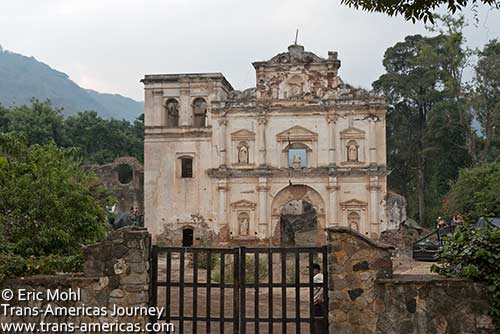 The ruins of Los Remedios church in Antigua, Guatemala.

There are at least twice as many Spanish schools in Antigua as there are churches. When we were in town Ana Díaz was just opening a brand new Spanish school called Antigua Plaza and she contacted us to see if we wanted to be among her first students. Nos dijo que si!

We spent every morning for the next week sitting at an antique wooden table in a lovely courtyard refreshing the Spanish we learned during lessons in Guadalajara and adding some new skills. It was fun and effective and we loved our teacher Brenda who was great at her job and gave us each adorable children’s notebooks. It’s also nice that Antigua Plaza has partnered with the serene Tabi House guesthouse so long-term students can get great accommodation too. 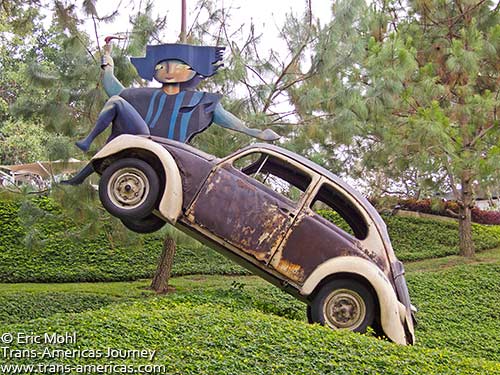 One of the sculptures on display at Santo Domingo El Cerro, an art park, gallery complex and, restraurant above Antigua, Guatemala. 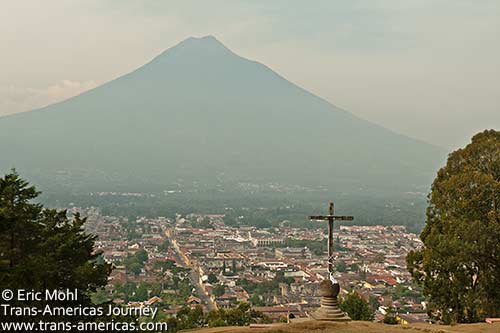 Antigua, Guatemala, and the Agua Volcano as seen from the Cerro de la Cruz viewpoint above town.

Seven miles (11 km) from Antigua you’ll find the small town of Ciudad Veijo. This is where Don Roberto and his son Edwin Castillo live and work. The Castillo family has been hand-crafting cowboy boots for generations and they now design and make a line called Botas Rango.  Some regional shoe stores sell their boots but the only place to get the insider price (starting at just 325Q or US$42) is by visiting their home/workshop. Call +51000603 or email botascastillo (at) hotmail (dot) com (Spanish only) to set up an appointment. Custom orders can be done if you give them enough time. 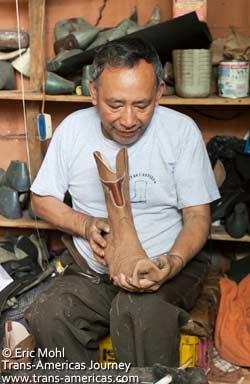 Antigua is ringed by three volcanoes. One of them, Pacaya Volcano, has been a regular erupter since 1965. That is until May of 2010 when it ceased all activity. For now. Bear that fact in mind before you book a hiking and camping trip to Pacaya which many local tour agencies are still selling with no mention of the fact that the volcano is not currently putting on the show visitors walk all the way up there to see. Unless, of course, you just want to take a steep, long walk.  Luckily our friends over at 2 Backpackers have a great video of the lava and smoke show Pacaya Volcano used to put on.

We highly recommend a day trip to Lake Amatitlan (about an hour away from Antigua) for a visit to the Santa Teresita Banos Termales & Kawilal Spa. The sprawling, sparkling clean facility has many beautifully tiled outdoor thermal pools of varying temperatures and offers a timed and guided circuit that includes a delicious natural fruit smoothie and time in a eucalyptus-infused private steam room. From about US$15 per person (more if you add on spa services or other extras) it’s a bargain. Just be aware that the best prices are online only so check the website for specials and book before you arrive.

Eating and drinking in Antigua

Even in a town full of inventive restaurants (you can get great local dishes, superb sushi, classic Italian and more), Bistro Cinq stands out. Created and helmed by Chef Robbin Haas, a Florida native who spends part of the year in Antigua, Bistro Cinq lures you in with a welcoming metal-topped bar that is more than fully stocked. We enjoyed Pig’s Nose Scotch, great wine, and sampled some of the 12 types of absynthes on hand, each prepared in the traditional way (flame, water, sugar). The menu (tuna tartare, duck pot stickers, real burgers, profiteroles) is written on a blackboard and each dish is expertly executed by local chef Mario Godinez. 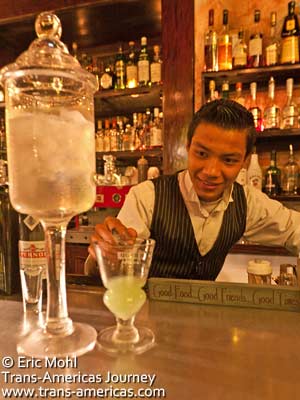 There’s no shortage of bars and cafes in Antigua but there’s something different about La Esquina. Maybe it’s the bar made from old bus parts. Or the smell of tasty chicken on the grill. Or the tempting handcrafted leather goods and jewelry and housewares in the window of the adjacent boutique (all at great prices and 20% off if you pay in cash). Or the DJs and bands performing live in the open courtyard. Or the…oh, just go and see for yourself. 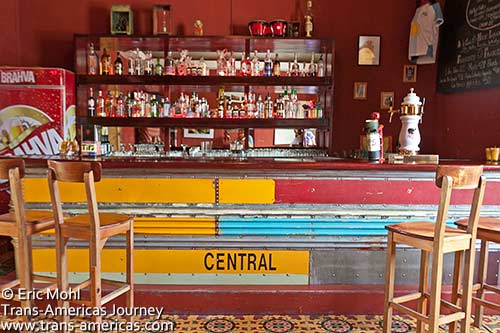 La Fondita offers about a dozen different traditional dishes. Pick what you want (a standard plate with a meat dish, a veg dish, thick Guatemalan tortillas, and other sides) and enjoy in a lovely back courtyard. It’s certainly not the cheapest meal in town, but our lunch was delicious and it’s the best place we found to sample a lot of different dishes in one spot and the atmosphere can’t be beat. 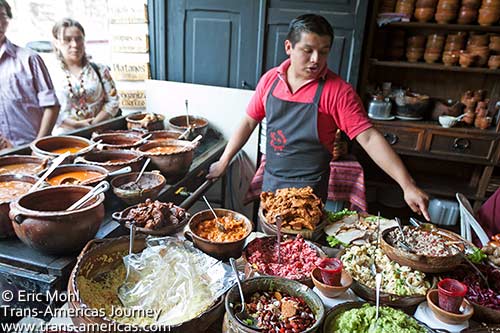 The mind-boggling selection at La Fondita restaurant in Antigua, Guatemala.

The cheapest wine so far during the Trans-Americas Journey was at the supermarkets in Antigua where entirely drinkable bottles (mostly from Chile) go for less than US$5.

A few blocks from Antigua’s central market (bustling every day of the week) is a two-level restaurant called Weiner where just a few bucks gets you a plate of authentic German schnitzel. Go for the pork. And be hungry. This thing is huge.

Just off the main plaza is a tiny ice cream store called Sobremesa Helados Exoticos which sells sublime scoops of rich, exotic, gourmet flavors like jasmine blackberry, apple chipotle, ginger guava, triple chocolate, and caramel sea salt praline. Rumor has it they’re up to 50 different flavors which rotate on and off the menu.

Where to sleep in Antigua, Guatemala

There are more fantastic hotels in every price point in Antigua than in any other destination in Guatemala. We’re happy to recommend one fabulous splurge and a great economical value. Let’s start at the top. 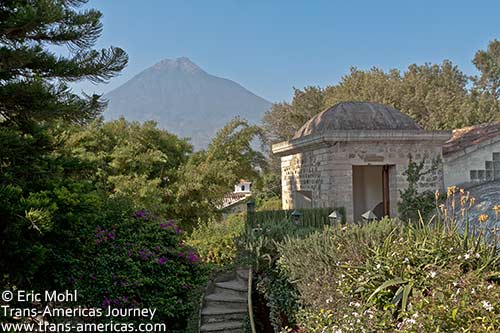 The Agua Volcano, as seen from one one of the serene patios at Meson Panza Verde boutique hotel in Antigua, Guatemala.

Stunning Meson Panza Verde, one of the first high-end boutique hotels in Antigua, will celebrate its 25th anniversary this year. Just 12 rooms are arranged in a traditional, colonial-style, open courtyard building. Rooms are big and full of rich fabrics and lots of wood and tile all accented with an unexpected collection of art–both colonial and modern. You can feel, see and touch old Antigua and new Antigua everywhere.

Hotel San Jorge has large, spotless rooms from US$50. They all have fireplaces and they’re all arranged around a meticulously maintained and super-serene garden. There’s also Wi-Fi and a secure parking lot but the best amenity is your host, owner Evelyn Herrera. She’s a bilingual fountain of knowledge and assistance. You could not be in better hands. During Semana Santa (book ahead!) she even invites guests to help create a traditional alfombra out of flowers on the street in front of the hotel. We don’t know of any other hotel in Antigua, in any price point, that offers that.

It has to be said that Hotel Casa Santo Domingo was a disappointment. Yes, the hotel is housed in a breathtaking reinvention of what was the church and convent of Santo Domingo and the Santo Tomas de Aquino College which date back to the late 1500s. Yes, the hotel lands on luxe travel magazines’ “best of” lists. However, it’s also true that the rooms we toured and stayed in were disturbingly motel-like (especially the bathrooms and the tattered soft goods) even though room rates start at US$250 per night.

We can’t advise you to check into Casa Santo Domingo but you should definitely check out the museums on the grounds of the hotel (free for guests, 40Q, or US$5, for non-guests). That one fee gets you into museums containing religious art, archaeological pieces, a vast liturgical silver collection, and a creepy crypt. There’s also a modern art gallery and a strangely-compelling Pharmacy Museum. A tour of the grounds is given on Saturdays and on Sundays mass is held at 10 am in the stately (but wall-free) remains of the on-site cathedral. 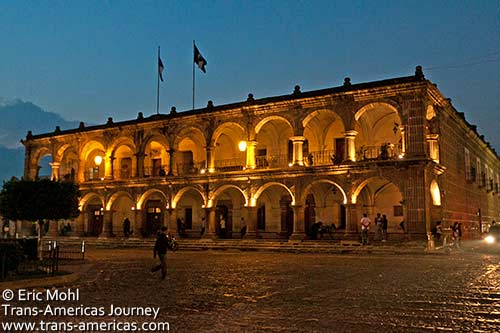 The Municipal building in Antigua.