Travel Gear Review: What We’ve Learned About Traveling with a Drone

In July of 2015 we got a DJI Phantom 3 Professional drone (aka UAV or quadcopter if the word “drone” sounds too military for you). So far we’ve used it to shoot nearly 12 hours of aerial footage during 82 flights covering 66.8 miles (108 km) in four countries. Our skills are being honed so that we can enhance more travel blog posts with drone footage and so we can offer aerial photography services to hotels, tour operators etc (if you’re interested in that, visit our Hire Us page and get in touch). After a year on the road with our Phantom 3, here’s what we’ve learned about traveling with a drone. 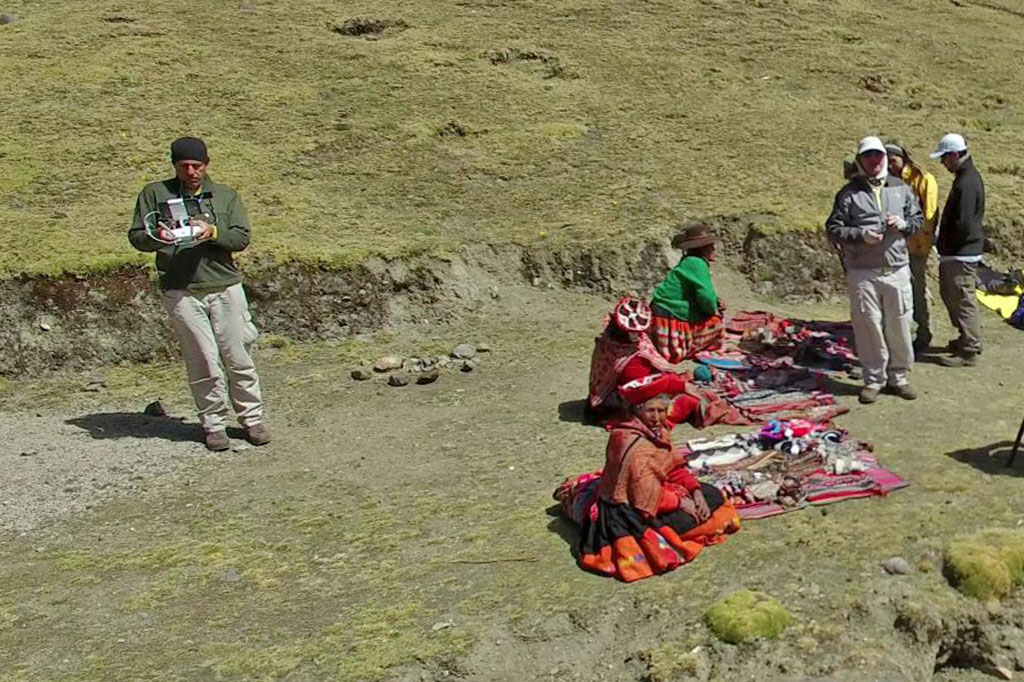 Eric manning the controls of our drone at Lake Ipsaycocah at 14, 212 feet (4,331 meters) in the Andes of Peru as local women and other trekkers look on.

Never drone alone. Always drone with someone who can help keep their eyes on the aircraft and use their hands as human landing pads to catch the drone if the terrain is uneven. If you land the drone on uneven ground it can easily tip over and break a propeller or worse (been there). 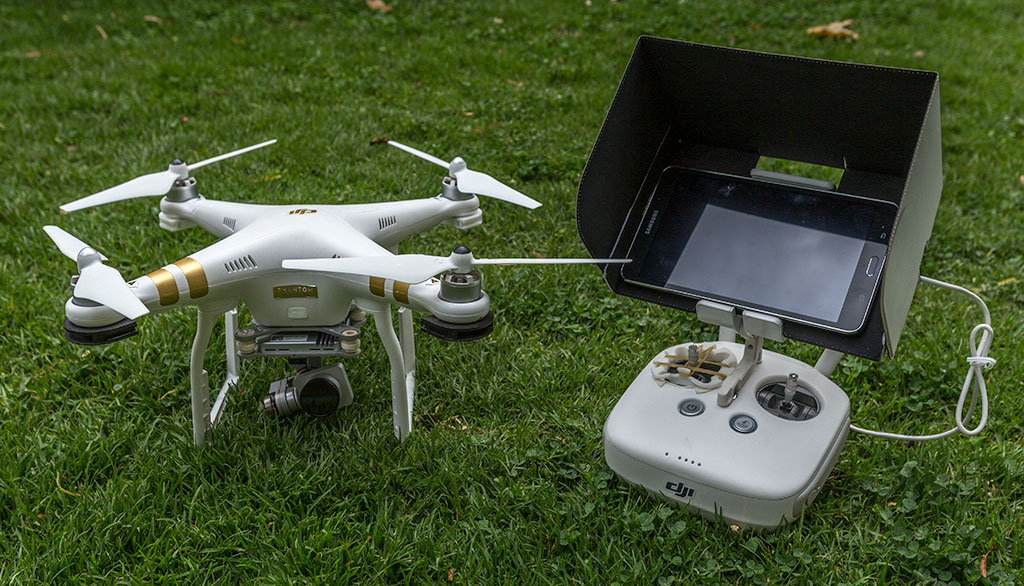 GPS is key. Unless you are a VERY skilled pilot avoid flying without GPS, which can happen if you’re flying in an area where satellites are hard to secure such as a steep canyon or around tall buildings, especially if there’s any wind. When hovering with a GPS lock, the drone stays pretty much locked in place even in a strong wind. Lose the GPS and the drone doesn’t know where it is so it can’t hold position. This lack of control in flight is terrifying.

Practice, practice, practice. If you want to hone your skills a cheap practice drone like this under $40 SYMA X5C is a great tool. It’s cheap, so losing or crashing it isn’t a crushing blow to your ego or your wallet, and since this cheapo model doesn’t have the brains and GPS of the DJI Phantom it takes real skill to fly it.

Buy spare propellers. Then buy more. They’re easier to break than you think. Luckily they’re also the cheapest drone accessory. You’ll find fancy carbon fiber propellers out there, but they’re more expensive and, most importantly, more dangerous. Drone propellers can rotate at more than 7,000 rpm and at that speed even the standard plastic props can do some damage. The carbon fiber props can easily take off a finger.

Buy spare intelligent flight batteries. We have three. In the Phantom 3, DJI states a flight time of approximately 23 minutes per fully charged battery (the new Phantom 4, with it’s slightly bigger batteries, has an approximate flight time of 28 minutes). However, we rarely get a flight time of more than 18 minutes since running the batteries too low can cause the aircraft to crash so we usually return with at least 25% of the battery life left. After the flight the battery must then be allowed to cool down before recharging which takes about 45 minutes with the 100W charger that comes with the Professional model. No one wants to wait around for a battery to recharge before flying again and if you’re shooting in a remote area, as we often are, you won’t have any electricity anyway.  So extra batteries are vital.

Safety first. Though the DJI batteries are generally safe, Li-Po batteries must be handled with care. There are many videos on YouTube which show how mishandling these batteries can cause them to explode or burn up violently. To be on the safe side, we keep ours in LiPo battery fireproof bags. Also note that according to the TSA and the IATA, you cannot put these batteries in checked luggage when you board a plane. 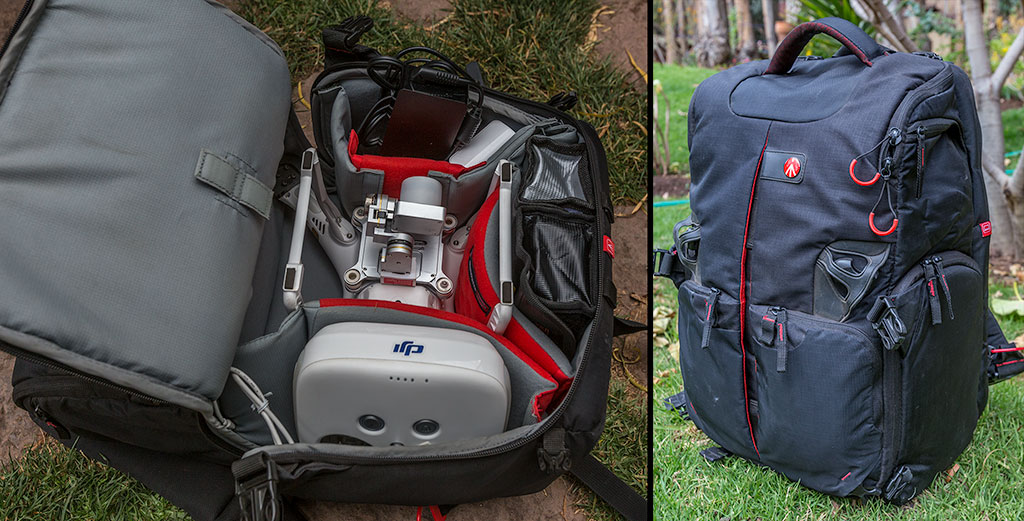 Bags matter. There are many drone bags out there. Some are soft sided. Some are hard sided. We chose the Manfrotto Pro-Light 3N1-35 Camera Backpack since it’s the very same backpack that DJI sold with their name on it (and a few drone specific modifications) for $100 more. The drone is held securely in the main compartment along with the remote controller, tablet, propellers, charger and other accessories. In the upper compartment there’s enough space for Eric’s SLR camera with a large lens attached. The backpack is comfortable enough to wear while hiking and it has a laptop compartment which we use to hold a Camekback water bladder while hiking. Manfrotto now makes a new tailor-made drone bag called the Manfrotto MB BP-D1 DJI Drone Backpack and it’s the bag I’d purchase now.

Wind is a killer. According to DJI, the Phantom 3 Professional can fly in wind up to 22 mph (35 kmph). We’ve seen videos of people putting their drones up in even crazier winds. Personally, we like to be conservative as we’re not eager to lose this flying machine. Remember that wind speed a few hundred feet up can be double the speed on the ground. Also keep in mind which direction the wind is traveling. Though the remote control gives an accurate real-time status of how much flying time you have left and, therefore, when you need to return, it doesn’t account for headwind which could make the return trip longer and more energy intensive. Crashing your drone because the battery ran out due to a stiff head-wind would be pretty foolish.

Invest in a good tablet. You can use an android or iOS phone as the display screen on your remote control, but you’re going to want a much bigger screen. We took the money-saving route and bought a $150 Samsung Galaxy Tab 4. Though perfectly functional, the screen is not the same quality as the screens found on more expensive tablets and it can be difficult to see the screen in sunny conditions. Next time around, I’d go for either the Nexus 9, Samsung Galaxy Tab S2, or an iPad. Oh, and you’re going to want a sunshade no matter which tablet you buy.

Neutral density (ND) filters are a must and here’s why. While there’s no problem using fast shutter speeds when taking still photos, when shooting video a fast shutter speed from a moving camera can cause a “jello” effect. This can be particularly problematic when shooting bright scenes such as around water, beaches and snow. ND filters darken the scene allowing you to shoot video using a slower shutter speed. We’ve been happy with the PolarPro ND filters made specifically for the Phantom 3.

Yaw is tricky. The yaw (rotation) of the camera can be very difficult to control smoothly when you’re trying to capture a panning shot. This simple plastic contraption gives the resistance that’s needed to have more control over fine stick movements that control camera rotation.

Don’t forget memory cards. High definition video makes for large files. When shooting in 4K mode we can shoot 7GB of video in one flight. The Phantom 3 Professional accepts  micro-SD cards up to 64GB  and they need either a Class 10 or UHS-1 rating. We’re partial to these Lexar Professional Micro SDXC cards because we really like the USB-3 adapter that comes with them which allows for easy transfer of videos to your computer.

Drone regulations are less organized in other parts of the world. In October of 2015 we were told about a photographer who arrived in Peru via plane and had his drone confiscated at the airport and held until special governmental permission was received. Once inside Peru, drones are banned at all archaeological sites (not just Machu Picchu). Chile was the first country in South America to formalize drone regulations and requirements in that country include registration of the drone and licensing of the operator with civil aviation authorities, insurance, no flights over 425 feet (130 meters) and, most absurd of all, a parachute. In India drones are illegal everywhere until they figure out their own regulations (in February of 2016 a tourist was arrested in India for flying a drone). It’s illegal to enter Nicaragua with a drone or fly it inside the country.

Clearly drone laws in many countries are still evolving. Sites including UAVCoach.com, TheDroneInfo.com and UAVSystemsInternational.com list drone laws by country but we encourage you to independently verify the regulations in the country you’re headed to.

Which DJI Phantom to buy?

We haven’t flown the newer Phantom 4 yet, but its primary advantage is its collision avoidance system. The Phantom 4 is also a little faster, has a longer range and has a larger battery that allows for slightly longer flight times.

If you think all of this sounds like serious business, check out the intersection of taxidermy and drones for a drone-driven laugh.

DJI Phantom 3 Professional  –  Buy on Amazon, or the  DJI Store

DJI Phantom 3 Advanced  –  Buy on Amazon, or the DJI Store

The following accessories are for the Phantom 3 model only