Ecuador is blessed with several ways to access the Amazon Basin. The most well-known and most popular way is via a river town called Coca and then along the Napo River (which is a major tributary of the Amazon River) where travelers find a wide range of tours, riverboat hotels, and the most upscale Amazon lodges in the country. Those seeking a more affordable and, in some ways, more intimate Amazon experience should head to the Cuyabeno Wildlife Reserve instead. Here’s why, including our drone aerial travel video over the area. 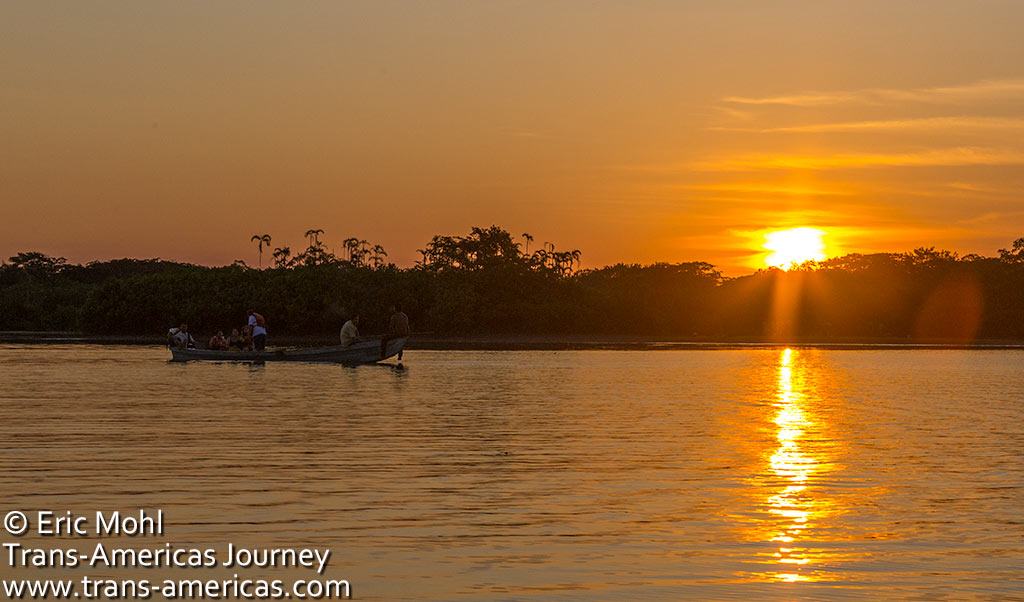 A sunset paddle on the Cuyabeno River in the Amazon Basin in Ecuador.

Founded in 1979, Cuyabeno Wildlife Reserve covers 1,490,000 acres (603,380 hectares) and is the second-largest preserved natural area in Ecuador. Most of that area is tropical forest which goes through annual cycles of flooding and then receding water. In the wetter season (which varies from year to year), thousands of acres flood. In the dryer season (December to March) the water recedes. 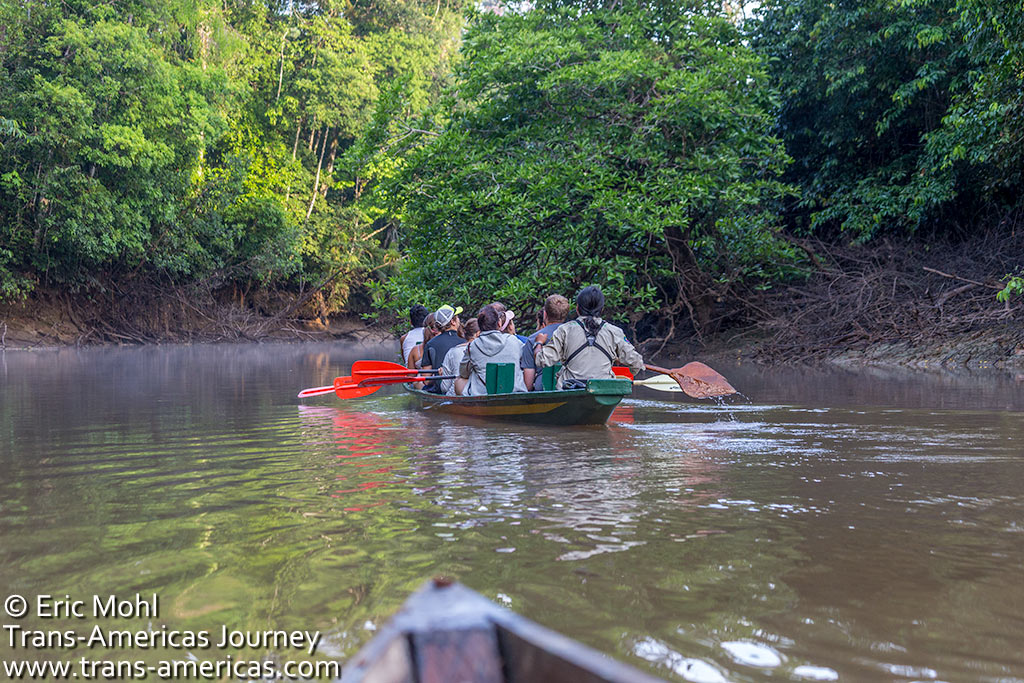 The river is the road through the vast Cuyabeno Wildlife Reserve in the Amazon Basin in Ecuador.

The only road through the Cuyabeno area is the Cuyabeno River itself. It’s much narrower than the Napo River which gives a more intimate feeling since the banks of the river are much closer together and, therefore, the wildlife is much closer at hand. Unlike the area around the Napo River, the Cuyabeno region has not been opened up for oil exploration so animals are much more plentiful as well.

There are also far fewer visitors to Cuyabeno than the number of people who visit the Amazon basin via the Napo River, so other boats and other travelers are few and far between. 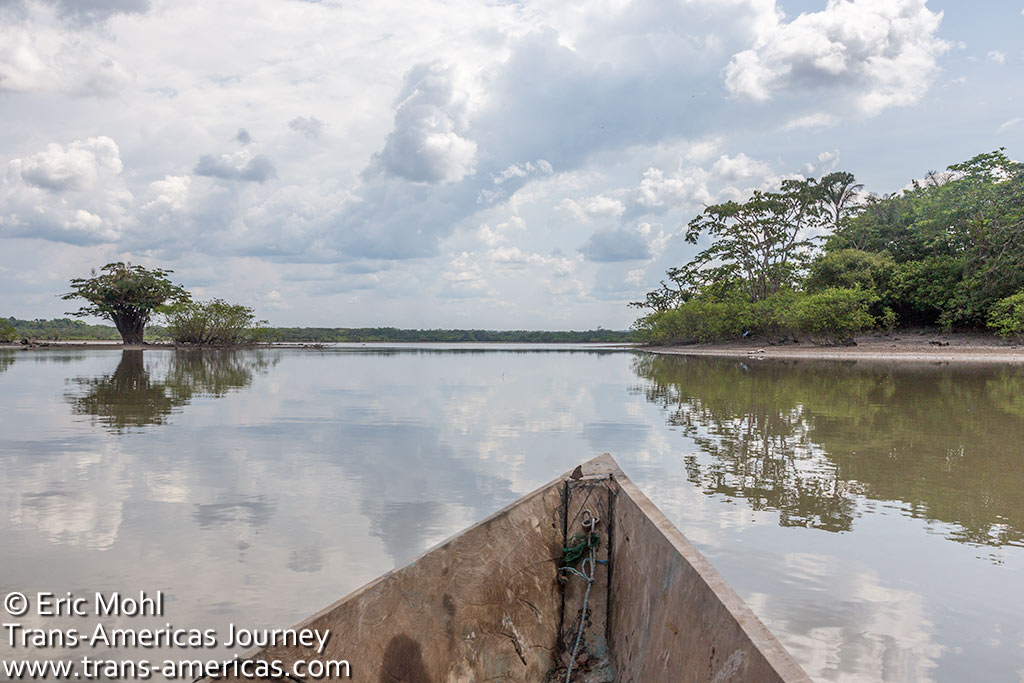 The wildlife of Cuyabeno

While humans are scarce there is no shortage of other animals. The number of registered bird species in the Cuyabeno Wildlife Reserve is currently being debated. Some say 530 species exist in the area while others believe more like 580 species have been observed. Suffice to say, there are a lot of birds. 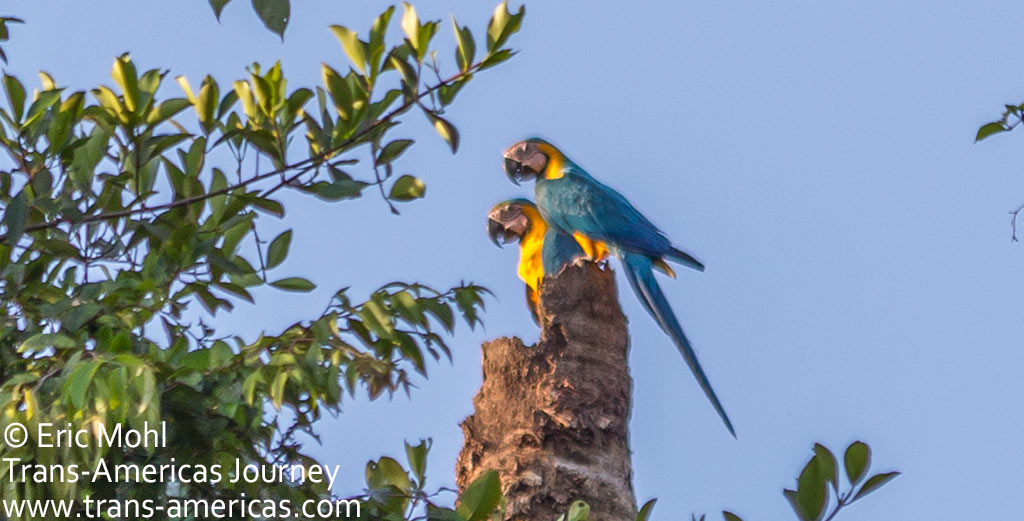 Like all macaws, these blue and yellow macaws mate for life. 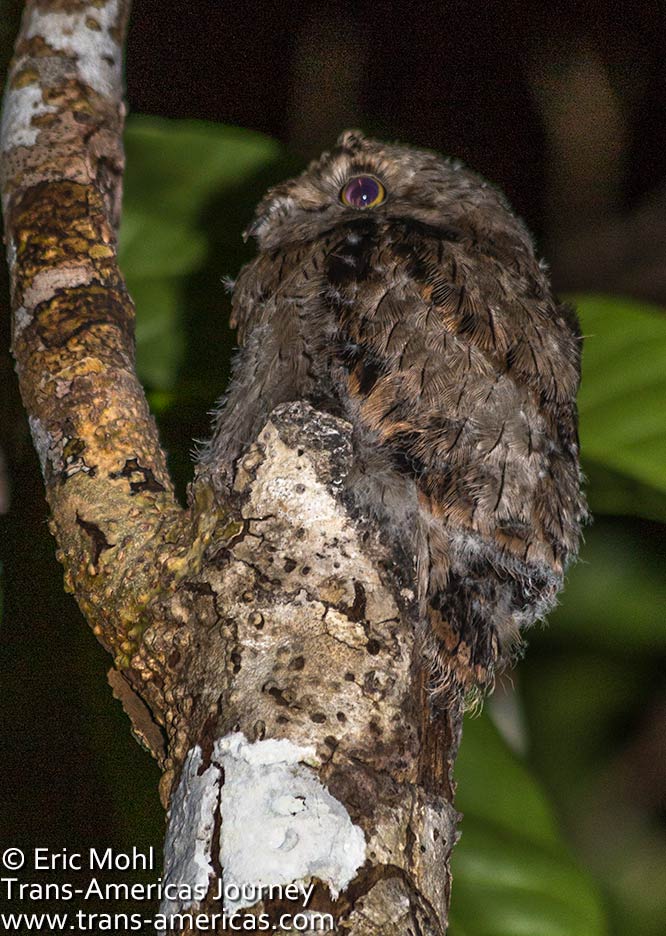 We spotted a juvenile pygmy potoo bird at night while in Cuyabeno – one more species we saw for the first time while in the reserve. 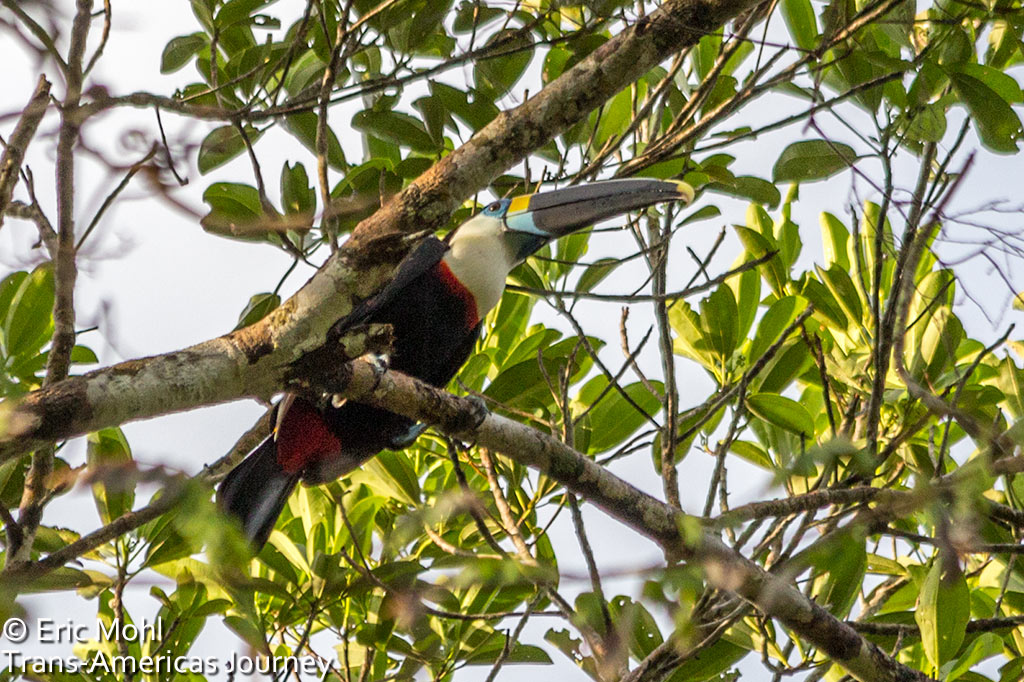 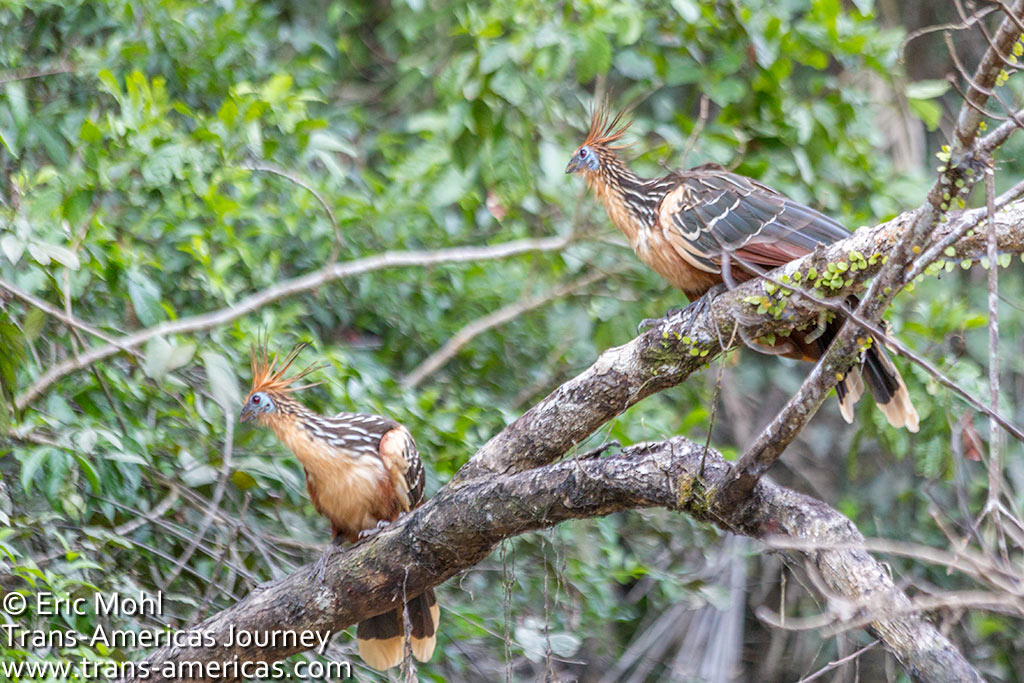 Hoatzin birds along the Cuyabeno River.

There are a lot of other critters in Cuyabeno too like the lowland tapirs, two species of deer, all of the Amazon cats, including jaguars and pumas, capybaras. and two species of river dolphins (one is vaguely pink).

There are also manatees and two types of river otters including imposing giant otters. Monkeys are everywhere as well with 10 species living in the area. There are dozens of species of rodents and bats, 350 fish species (including massive and delicious paiche), two species of caiman, boa constrictors, and anacondas plus many vociferous types of frogs and toads. 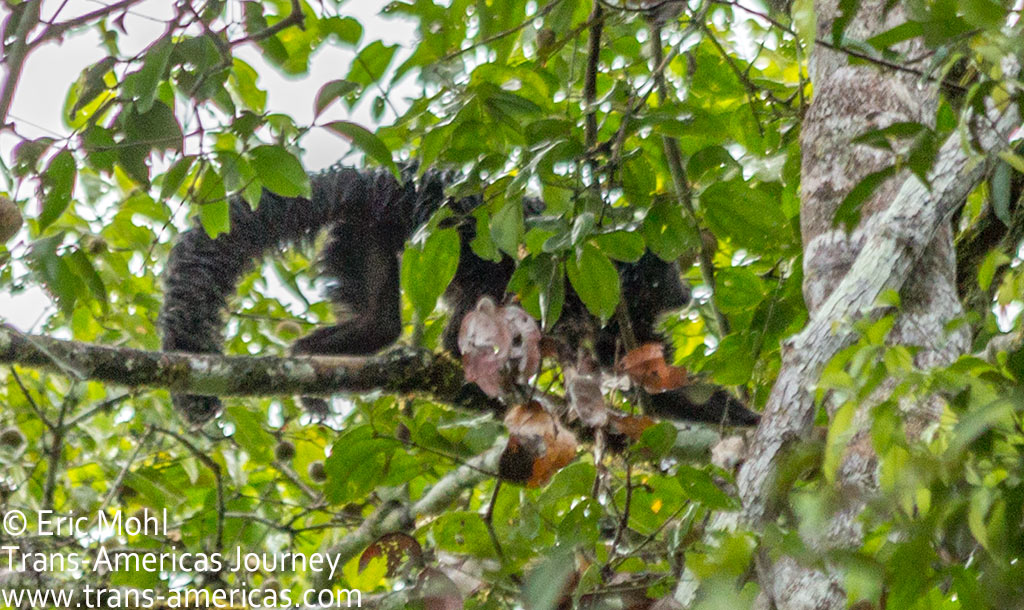 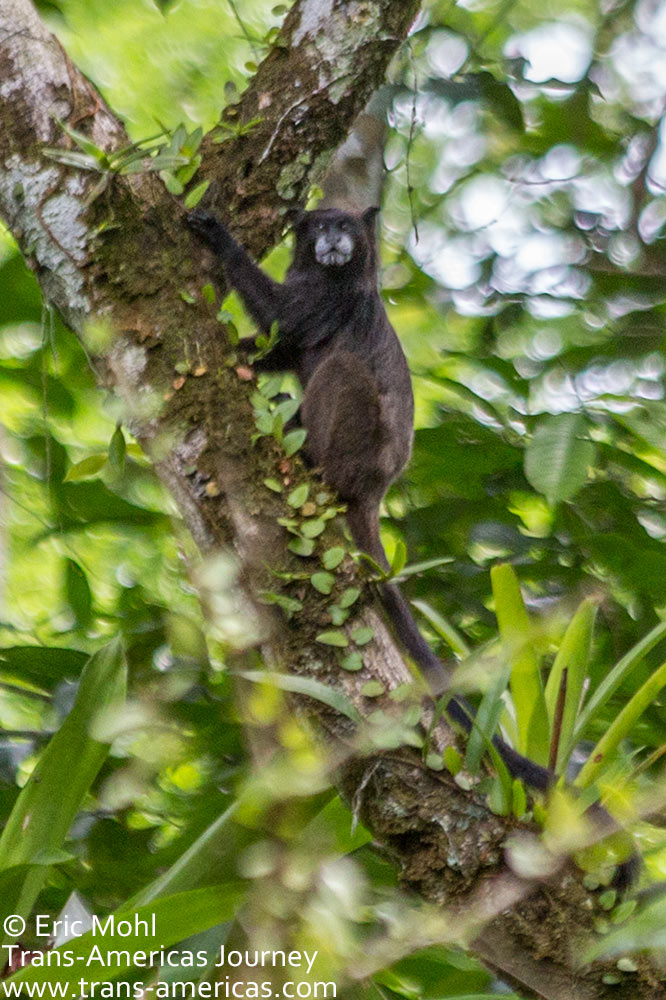 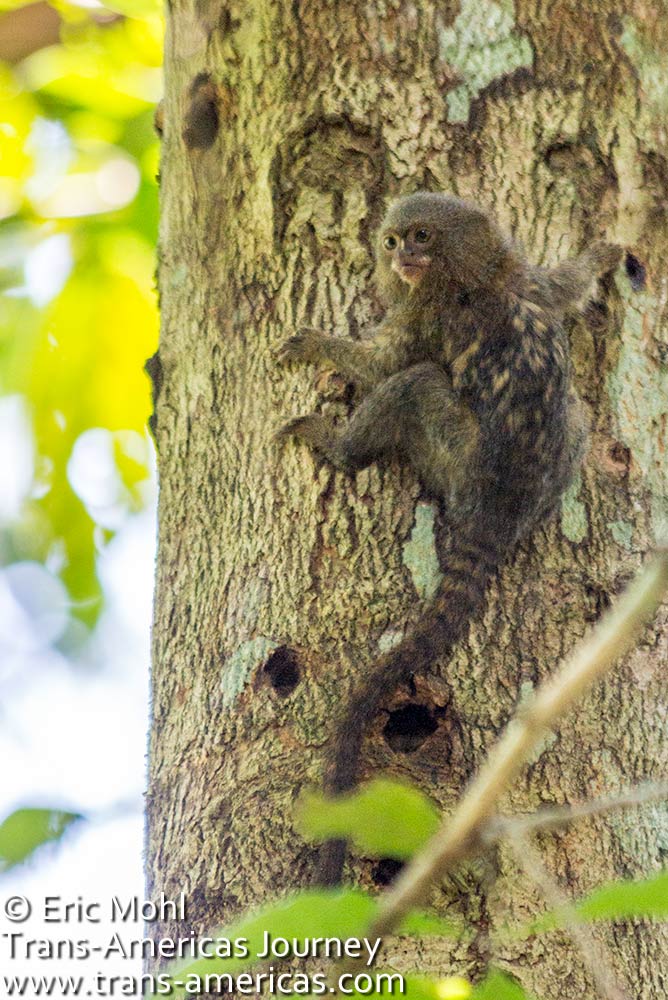 This little guy is a pygmy marmoset, the smallest monkey in the world. We saw one for the first time in Cuyabeno. 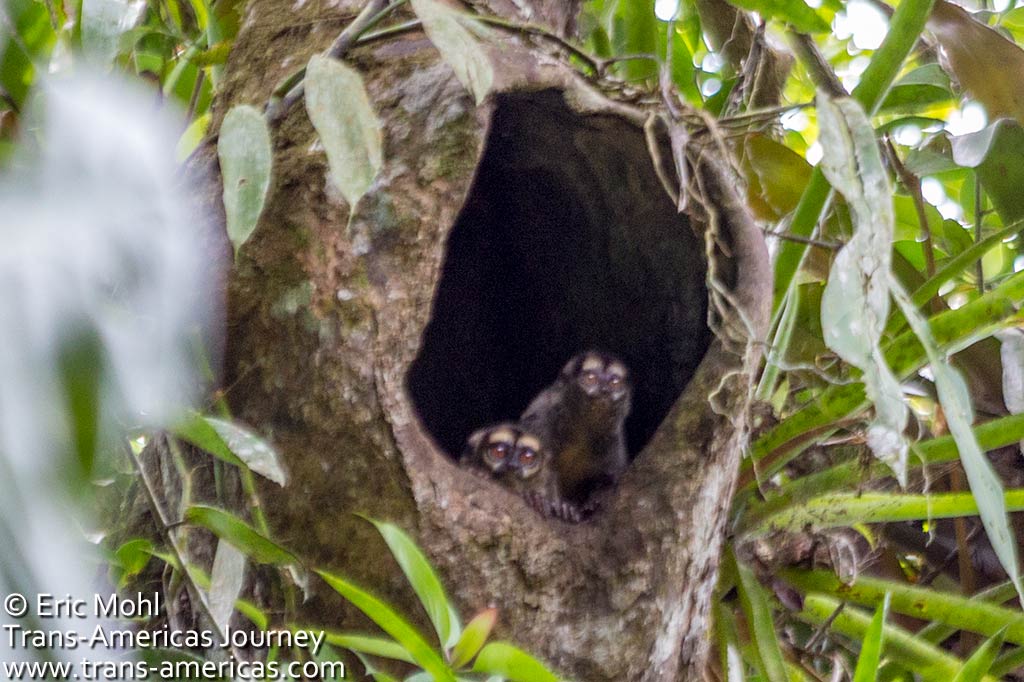 These are Spix’s night monkeys, the only nocturnal monkeys in the world. We think we were interrupting their daytime beauty sleep.

We visited the Cuyabeno Wildlife Reserve during low water and saw dozens of different species. Though we’ve spent a lot of time in jungles around Latin America we also saw many species for the very first time including a Saki monkey, a pygmy potoo, Spix’s night monkeys (the only nocturnal monkey in the world), and tiny pygmy marmosets, the smallest monkeys in the world, which were busy sucking sap from tree trunks. 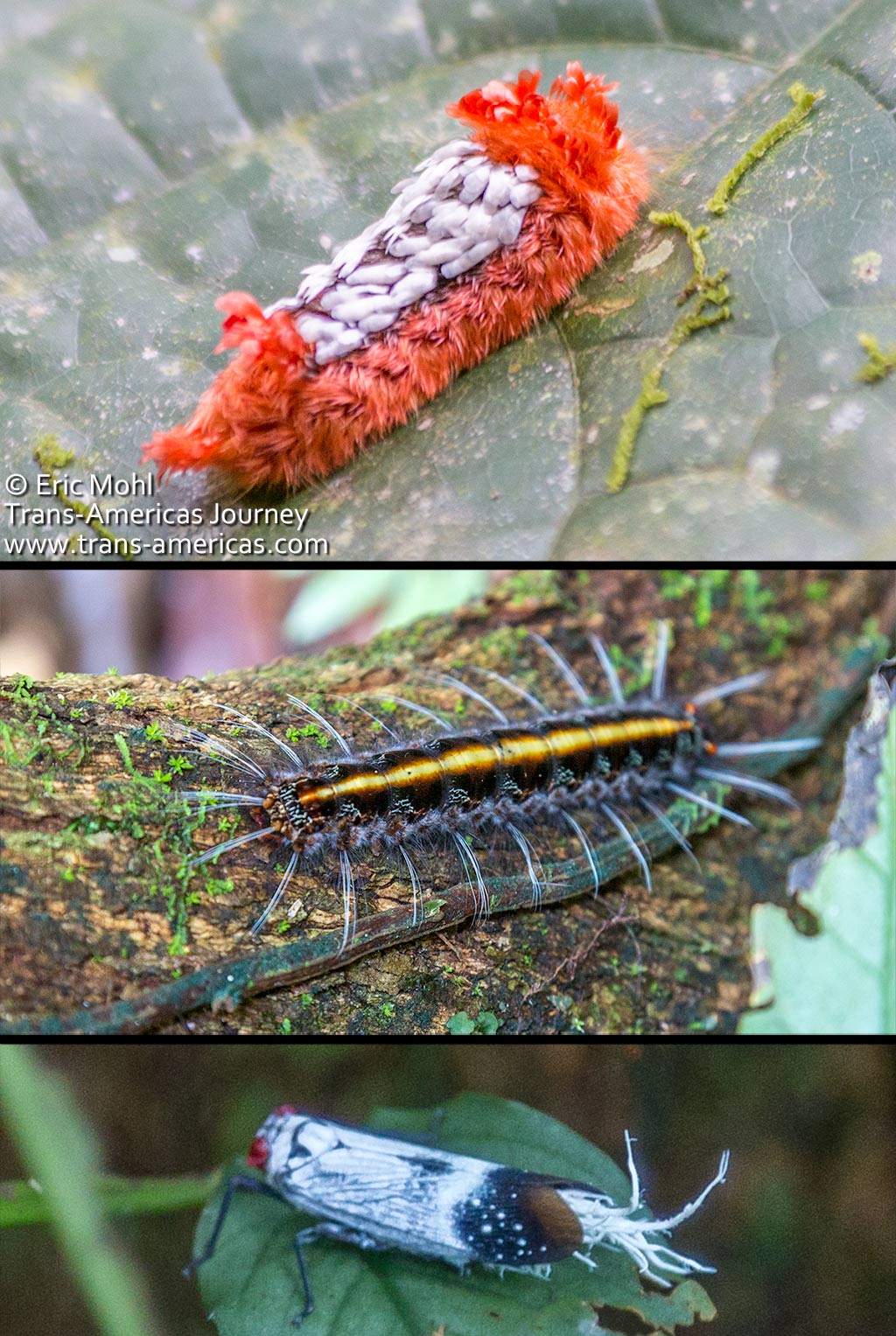 We have no idea what these insects are but they sure are pretty. 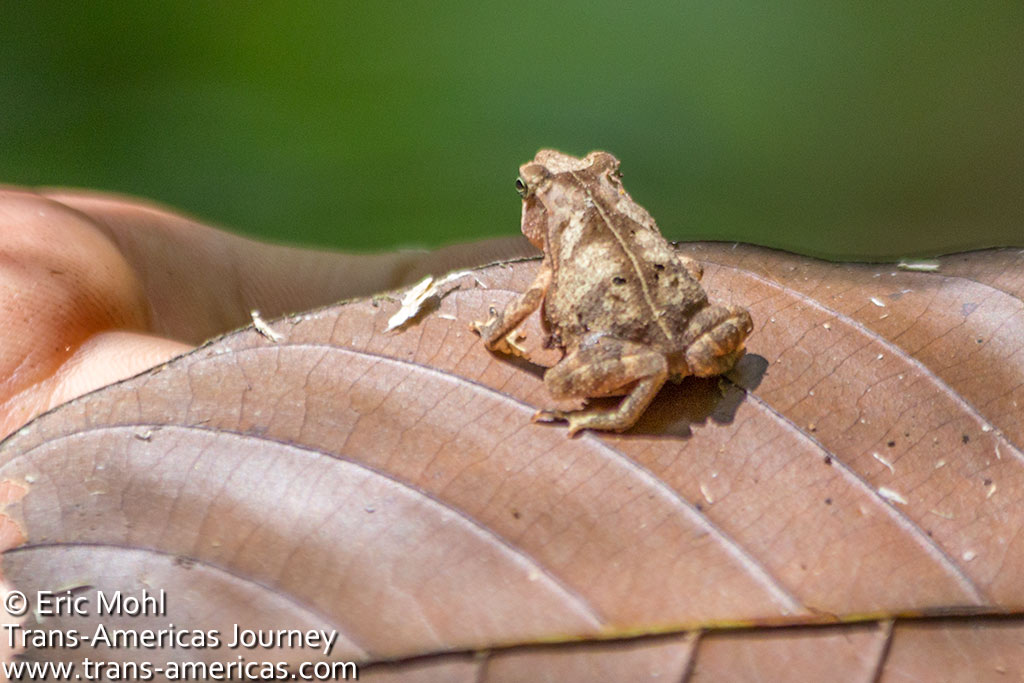 There are frogs and toads of all shapes and sizes in Cuyabeno and at certain times of the day they make the jungle sing. 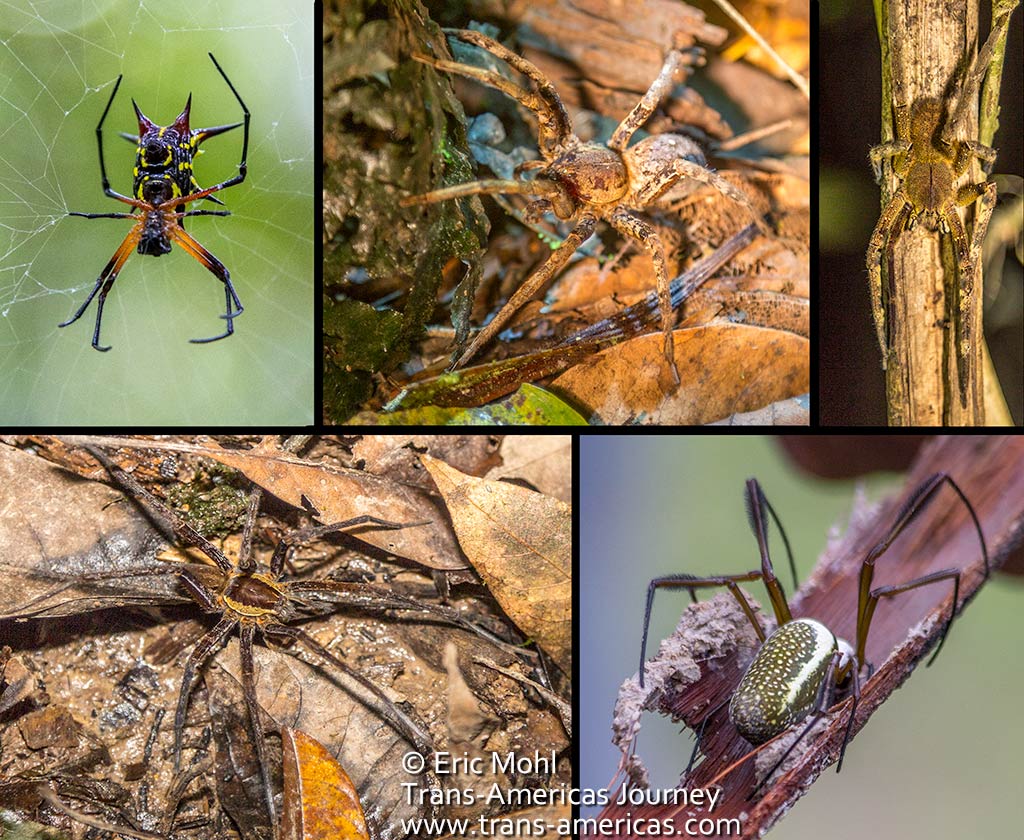 The people of Cuyabeno

Humans also live in the Cuyabeno area including members of the Siona, Sequoya, and Cofan indigenous groups who were allowed to stay in their villages and maintain their way of life even after the reserve was created. 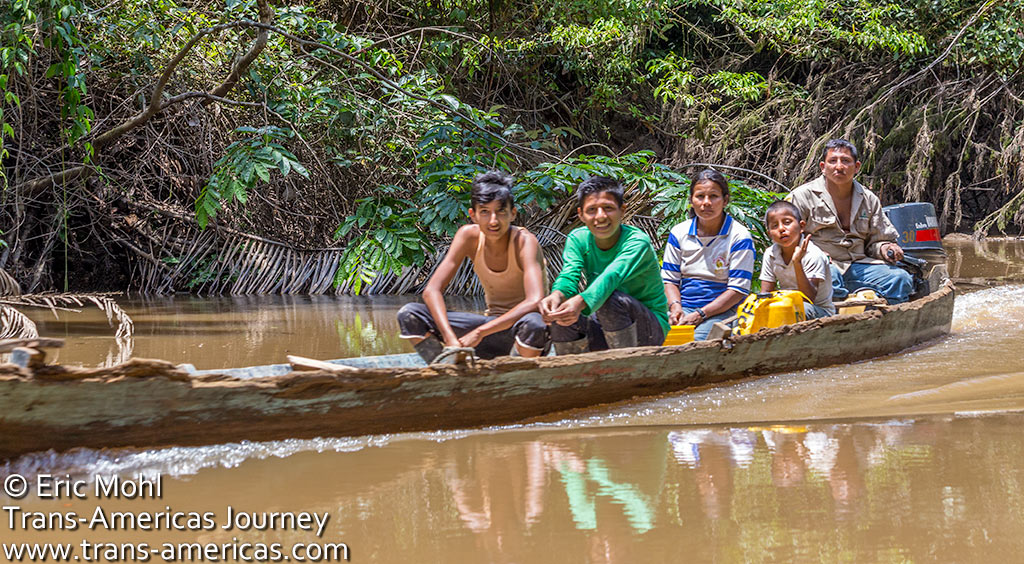 Locals on the Cuyabeno River.

So, in addition to hiking on dry land and paddling in small boats through the Cuyabeno River, tributaries, and flooded forest areas to see wildlife, it’s also possible to visit villages and see a little bit of the local ways of life. We visited a village where a woman demonstrated how to make a cracker-like bread from yucca that’s been grated and pressed into a kind of flour before being cooked on a massive clay disc. It’s a labor-intensive but delicious staple of the diet. 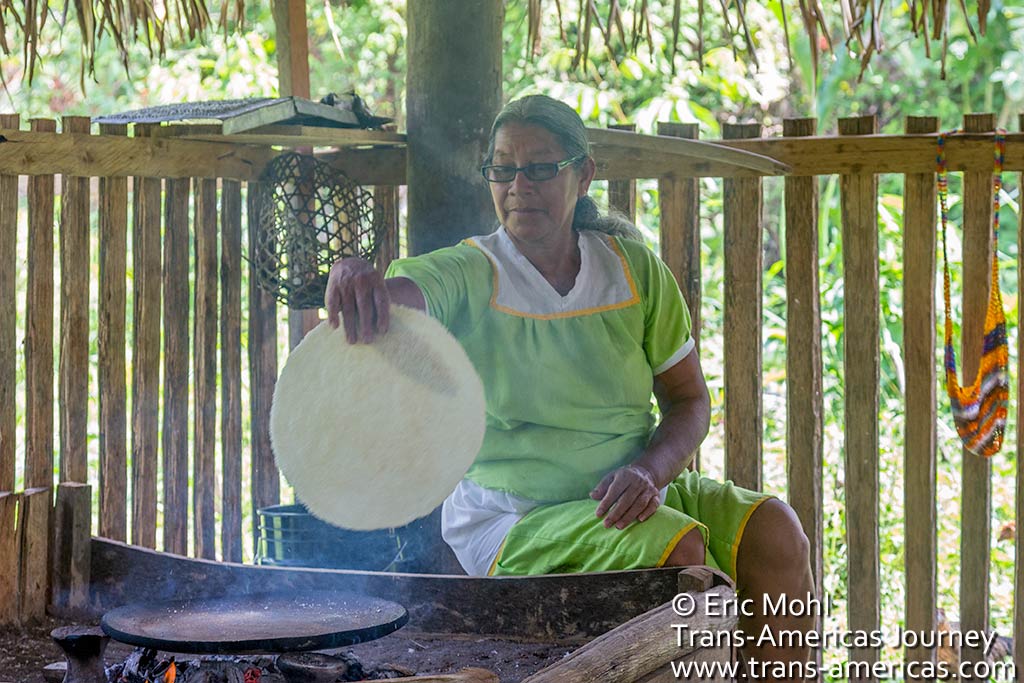 This woman made it look easy, but making yucca bread is a process which involves grating fresh yucca root then squeezing the water out to create a kind of flour which is then cooked into a tasty flat bread.

Shamans remain an important part of life in most villages and we also had the chance to visit one while in the Cuyabeno Reserve. We’ve had many encounters with shamans over the years but our time with a shaman named Tomas was the most informative and authentic yet. As a sudden rain storm opened up overhead, Tomas happily described his journey to shaman-hood in the footsteps of his father and grandfather and answered all of our questions. 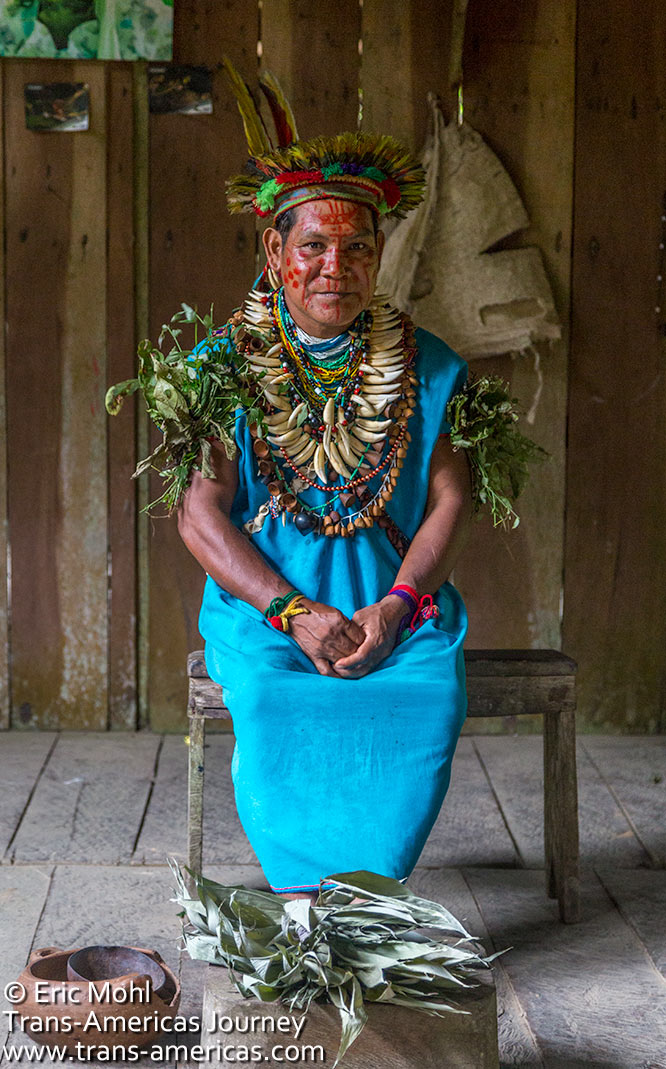 Tomas also performed a “cleansing” for one of the members of our group. This involved a thrashing with a bundle of sticks, blowing, and other rituals meant to expel bad energy from the body. We were the only tourists there and we never got the feeling that Tomas was “putting on a show” for us. 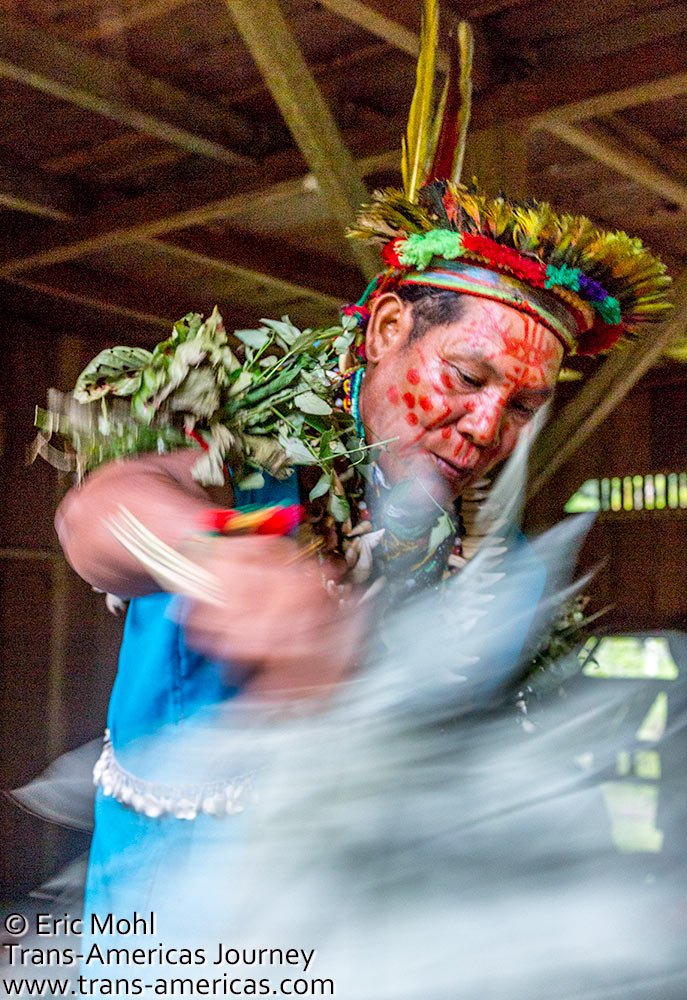 Tomas works his medicinal branches during a cleansing ceremony.

Where to stay in Cuyabeno

The dozen or so Amazon river lodges in the Cuyabeno area are simpler and cheaper than the lodges located along the Napo River. A few Cuyabeno lodges are located on Laguna Grande, but see our travel tip below before booking. The rest are scattered along the banks of the river. Lodge rates include meals and guided exploration of the reserve. 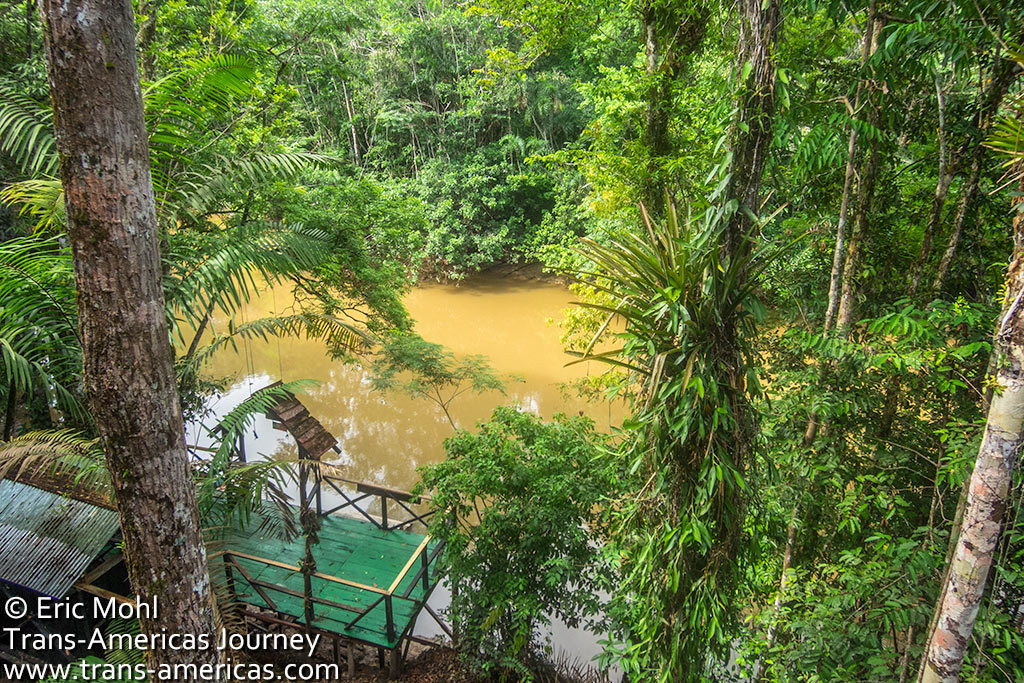 Tapir Lodge has a bamboo and thatch tower of rooms right on the riverbank. This could be the view from your room.

We stayed at Tapir Lodge which has solar panels and a backup generator, good food, and a tower of simple thatch roof rooms with private bathrooms near the bank of the Cuyabeno River. Though rooms are well-screened, some critters do get in. There was a (relatively) small tarantula on our ceiling until Karen insisted that someone give it its own room…
Book Now 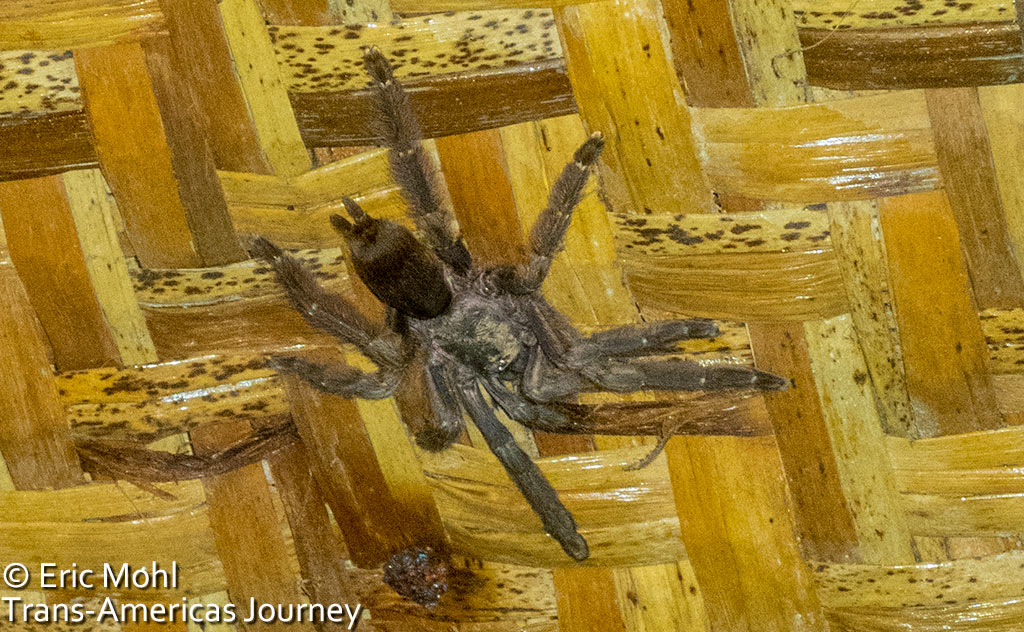 One of us really, really, REALLY wanted this guy out of our room.

The best amenity at Tapir Lodge is owner Kurt Beate. He’s been exploring the area for more than 40 years, first as a guide and later as the creator of Tapir Lodge which he opened almost 20 years ago. It was one of the first lodges in the area and the very first to offer private bathrooms, hot water, and electricity based on solar power.

Kurt’s enthusiasm for the region has not dimmed over the years and you really want to be at Tapir Lodge when he is on-site and available to explore with you, which is about 70% of the time. Ask if Kurt will be at the lodge when booking.
Book Now

For more Cuyabeno Wildlife Reserve and Tapir Lodge inspiration check out our drone travel footage, below.

Be wary of booking a lodge that’s located on Laguna Grande. The lagoon is beautiful, but during dry times the water level can drop to the point where boats can’t enter the lagoon. That means you’ll be in for a long, hot slog to and from your lodge.

Here are some other things to ask before booking a Cuyabeno lodge:

Is there 24-hour electricity and is it supplied, at least in part, by solar power?

How many guides will be available and what is their certification and experience?

Do you provide binoculars and/or spotting scopes to your guides?

Do you provide real coffee or instant coffee (most adventures start early in Cuyabeno)?

Do your boats have lightweight paddles or heavier wooden paddles?

Do you provide drinking water to guests? 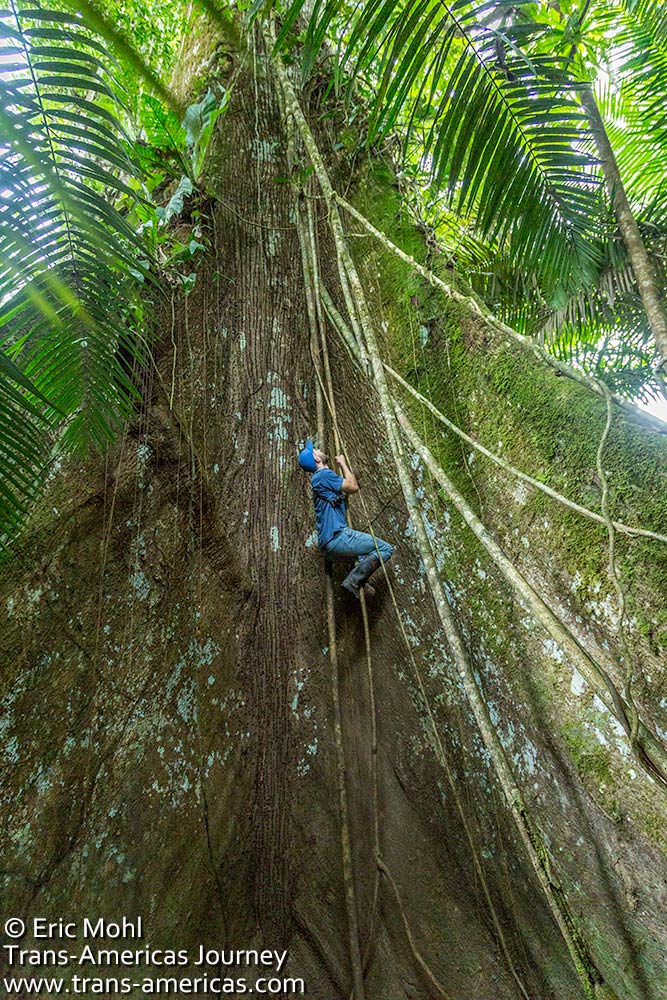 This massive jungle tree is a major attraction. It even has its own sign. Climbing up its vines: optional.

From Quito, you can fly, drive or take a bus to the dismal oil town of Lago Agria. Then it’s 1.5 hours by road to the Cuyabeno bridge where your roughly two-hour journey on the river in a motorized canoe will begin to reach your lodge in the reserve. In times of low water the trip takes longer. Entry to all parks and reserves in Ecuador is free except for the Galapagos Islands National Park. And use our post about 9 Great Big Amazon Travel Myths to plan your adventure.