We’re not archaeologists, and yet we’re making it a bit of a career of visiting the half-eroded cryptic remains of previous civilizations here in Mexico. One of the most famous piles of rocks in all of Mexico is what’s left of the once-mighty Mayan city of Tulum near the hipster beach town of Tulum. 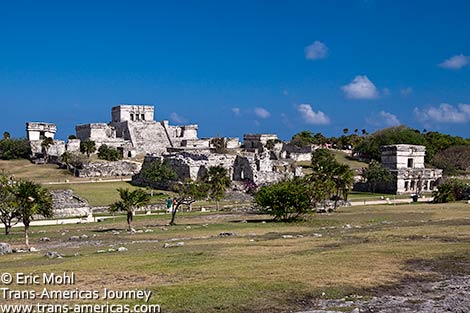 This is essentially the view that greets visitors as they enter the Tulum archaeological site.

Traipsing through the Tulum archaeological site

Eric was here more than 15 years ago and he remembers a place that was still a bit Indiana Jones. These days, the Tulum archaeological site (US$4) has been manicured so much that it feels a bit like walking through a nice urban park that just happens to have a lot of mysterious old buildings in it. 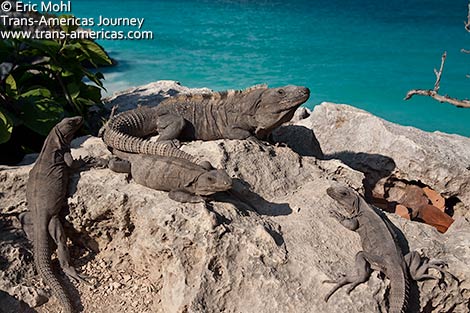 These days the only inhabitants of Tulum are some birds and hundreds of iguanas.

Still, it’s enjoyable and since Tulum isn’t a huge site and you can’t climb any of the structures you can tour the place in less than two hours unless you’re really, really into ruins or really, really into iguanas. There are hundreds of the things living here in every nook and cranny. 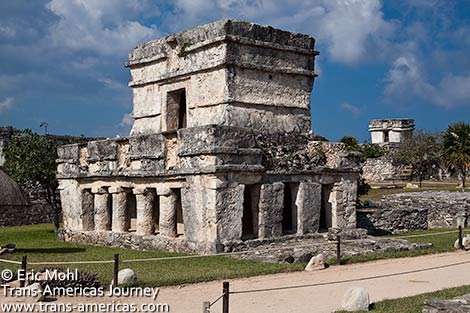 We like to think of the Mayans who lived in Tulum as the real estate agents of the Pre-Columbian world. How else to explain how and why they ended up with such gorgeous beachfront property perched high up on a dramatic 40 foot (12 meter) cliff overlooking the gorgeous Caribbean when their contemporaries were hacking their way through the humid, mosquito plagued jungle? Okay, maybe there are one or two other explanations, but we’re not archaeologists, remember? 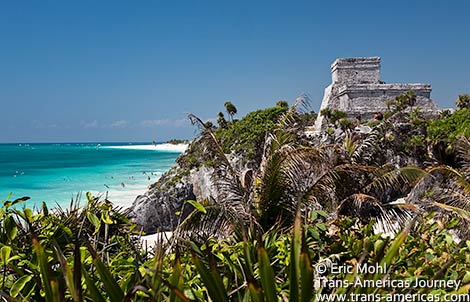 The Mayans who lived at Tulum had a million-dollar view of the Caribbean.

You can use your entrance wrist band to re-enter Tulum multiple times during the same day, so hang onto it in case you want to see the place in the morning light and in the afternoon light which are both great times to take pictures of Tulum. Unfortunately, the caretakers of the site have roped off some key vantage points for safety reasons, making it hard to get the ruins, cliff, and ocean in one picture. 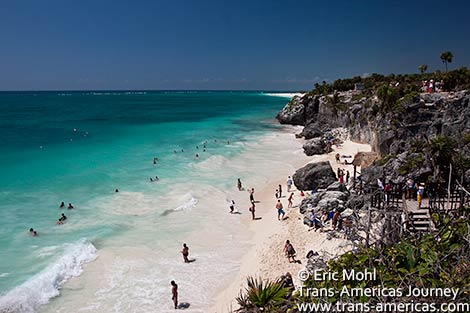 After touring Tulum in the hot sun visitors can walk down to the beach and take a dip.

Climbing around the Cobá archaeological site 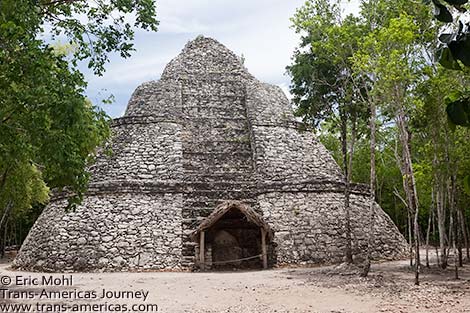 This oval pyramid at Cobá was our favorite structure at the site.

The Cobá complex was home to at least 50,000 inhabitants and their city spreads out over 50 square miles (80 square km). This means there’s a lot to see and a lot of space to cover. We chose to walk between the various “neighborhoods” of Cobá but you can also rent bicycles and peddle yourself or rent a bicycle taxi and a driver to do the peddling for you. 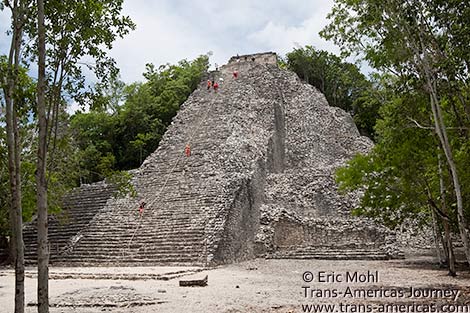 Cobá’s Nohock Mul, aka the Great Pyramid, is a rocky dare with steps all the way up to its summit almost 140 feet up.

The jungle canopy stretches out forever from up at almost 140 feet (42 meters) on top of Nohoch Mul, aka the Great Pyramid, at Cobá. 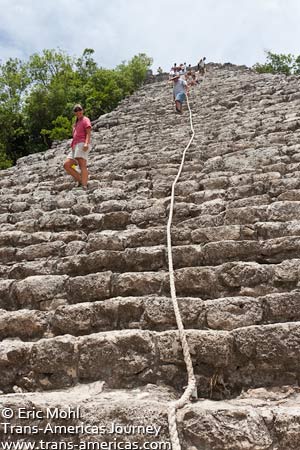 Karen climbing down the Great Pyramid at Cobá. 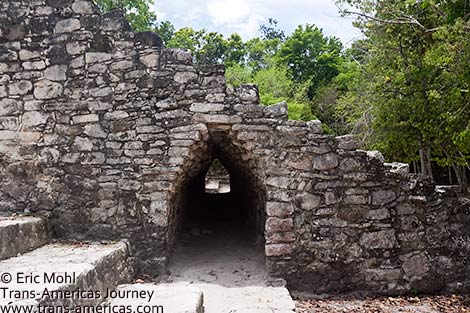 This archway underneath the stairs that ascend a temple at Cobá shows just how small (and clever) those Mayans were.