If someone said to you “Hey, the world’s most gigantic and elusive fish is pretty much guaranteed to show up at this spot on these days, all you have to do is jump in the water,” wouldn’t you jump? That’s how we ended up going whale shark hunting around Gladden Spit in Hopkins, Belize. 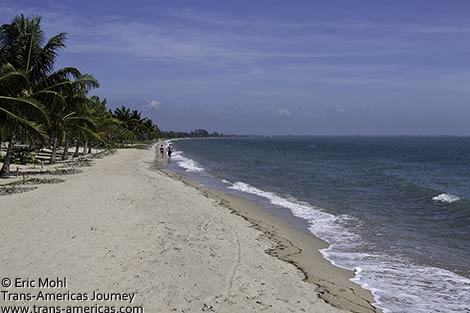 A lovely beach in Hopkins, Belize. There are whale sharks out there somewhere…

Looking for whale sharks in Belize

Decades ago fishermen in Belize started noticing giant creatures in the water around the full moons in the spring and early summer when local mullet snapper spawn off the southern coast. Not realizing that whale sharks, which can grow to 60 feet (20 meters) long, are neither whales nor sharks but toothless and harmless filter feeding fish, the fishermen were terrified. But SCUBA divers and snorkelers were thrilled and the site of this annual whale shark convention, Gladden Spit, was soon inundated with neoprened hopefuls.

The area has since been protected and designated the Gladden Spit and Silk Cayes Marine Preserve, but a controlled number of divers and snorkelers are still allowed into the water during what’s become known as whale shark season. We recently joined them. 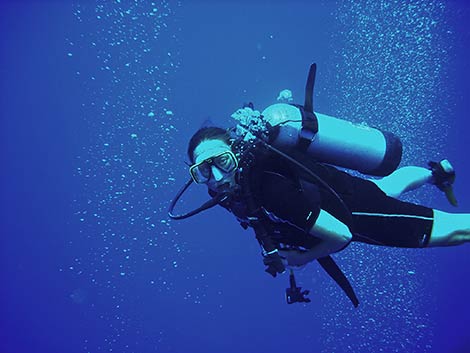 Karen is thinking: Honestly, does anyone look good when they’re SCUBA diving?

We’re not usually nervous when we dive, but all the hype and anticipation about the possibility of seeing a whale shark (one of the world’s largest yet most rarely seen marine animals) had our nerves going. Descending into the big blue of the open ocean, without the usual reef around us for visual and navigational reference, also got our hearts pounding. It was beautiful and disorienting at the same time but there was no time to worry about that. We had mullet snapper to find. 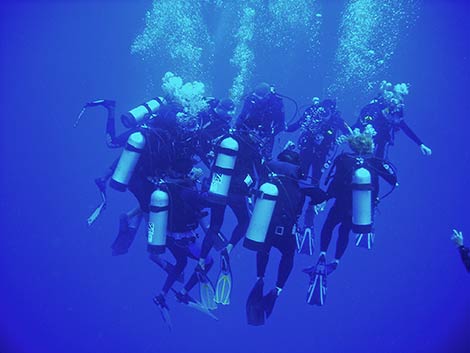 Hopeful divers form a circle to concentrate their bubbles in a way that mimics spawning mullet snapper in an attempt to attract a whale shark. It didn’t work.

The whale sharks come here to eat the mullet snapper spawn. Find the massive schools of mullet snapper and you find the whale shark. Theoretically. Thanks to hard working (and fast swimming) dive masters from Hamanasi Adventure and Dive Resort in the town of Hopkins we had no problem finding the fish. 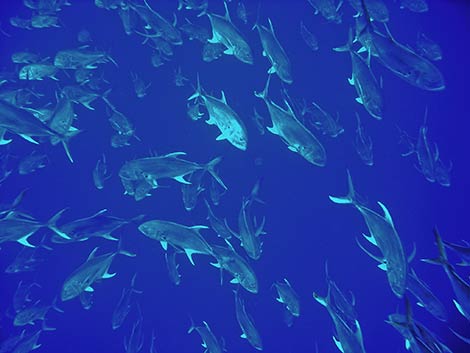 We found plenty of mullet snapper but where were the whale sharks that feed on their spawn?

After three fruitless dives over two days we were getting frustrated–and desperate. We only had one more dive left and we weren’t feeling particularly lucky. How, we wondered, can something so big be so hard to see? 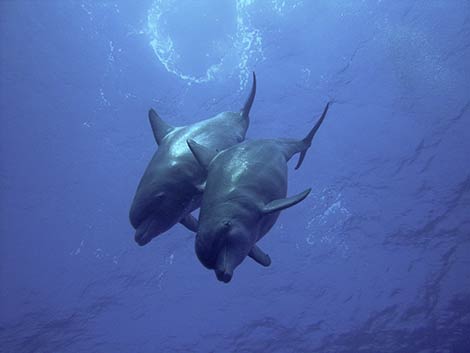 It was hard to tell if the bottlenose dolphins that swam around us for almost an hour were laughing at our vain attempt to find a whale shark, or just being friendly (photo courtesy of dive master Sam “I am” Noralez).

On our fourth and final dive we again found plenty of mullet snapper but no whale sharks. Then, as if to put things into perspective, a pod of bottlenose dolphins found us and swam among us for the rest of our 50 minute dive. They may not be whale sharks but how many people can say they’ve been able to swim with dolphins in the wild? 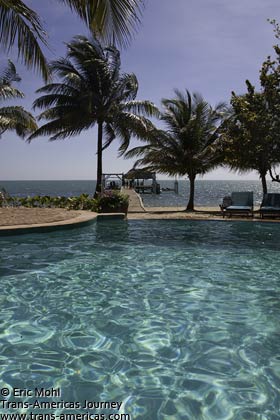 The pool at Hamanasi Adventure and Dive Resort was so inviting we had to get in even though we were water logged from our SCUBA search for whale sharks.

We  limped back to our home base empty handed, but Hamansi Adventure and Dive Resort was a great place to try to get over our disappointment. This resort and dive shop just got Green Globe certification. Your welcome note is written on a dried leaf, refillable water bottles are encouraged to reduce plastic bottle trash, and guests can offset the carbon produced by their vacation. Animals wander through the beachfront property. The waves crash. The breeze blows. 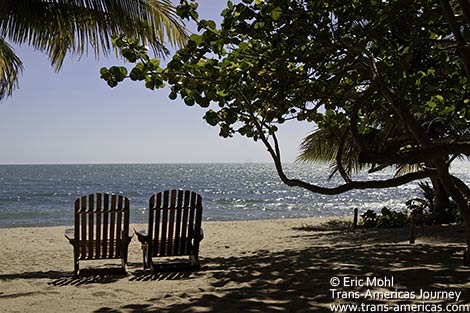 Though we were disappointed that we didn’t see a whale shark it was hard to get too stressed out at Hamanasi Adventure and Dive Resort.

Other things to do in Hopkins, Belize

There are other things to do in Hopkins besides look  for whale sharks–like eat. To say Hopkins is a small town is a bit like saying whale sharks are big fish. However, this small town has some pretty big city eats including Chef Rob Gourmet Cafe (the menu changes pretty much daily but we loved the snapper with papaya “ketchup”) and Driftwood Pizza on the beach (our roasted garlic and marinated zucchini pizza was a dream washed down with an ice cold Belikin beer). 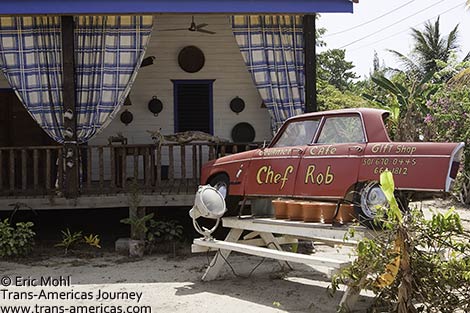 Big cuisine in the tiny town of Hopkins.