It’s true. Mexico’s Riviera Maya on the Yucatan Peninsula is full of white sand beaches and true blue Caribbean water. But the jungle in the area is also dotted with an unknown number of cenotes which offer gorgeous ways to get wet and cool off without waves, sand or salt. 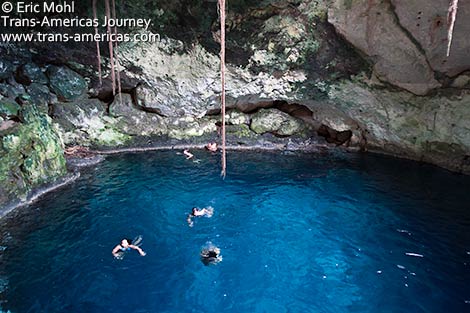 The water level of some cenotes is at ground level,while others, like this one, require a climb down to reach their refreshing freshwater pools.

Cenotes are caves that have become flooded causing the roof to collapse which exposes an almost perfectly circular opening to the sky above giving people and animals easy access to the water below.

And what water! Cenotes aren’t just filled with fresh water, they’re filled with rain water that’s filtered through the surrounding limestone. The result is water so clear it seems impossible. Yes, you can see clearly all the way to the bottom of most cenotes and you can also see anything swimming in the water (people, fish, turtles) with amazing (and kinda spooky) clarity.

Drive any road in the Yucatán Peninsula and you’re likely to see hand painted signs with the names of cenotes on them along with a crude arrow pointing the way to it. For a few pesos the property owner will allow you take a swim. Some cenotes have been built up with ladders and snorkeling gear rental and others have been left pretty much the way they were found. They’re all refreshing and gorgeous.

Check out our underwater video, below, from a number of great dips in various cenotes, caverns, and underwater rivers.

SCUBA diving in a cenote

Because cenotes are not fully enclosed like intact caves are, scuba diving in a cenote is considered less extreme and less dangerous than cave diving. After SCUBA diving in Dos Ojos (Two Eyes) cenote with Hidden Worlds Cenotes Park, we’re here to tell you that’s it’s still one wild experience.

As we’ve said, the water in a cenote is so clear that when you’re SCUBA diving in it it sometimes looks like air, not water. It’s also very dark once you swim back into the chambers of a cenote, past the point where the collapsed roof lets in light. And a little claustrophobic.

And then there are the areas where sea water is seeping into the cenote and mixing with the freshwater, causing something called a halocline. Imagine swimming through absolutely perfectly clear water one second, then everything around you leaps out of focus in a swirl as if some unseen hand just smeared Vaseline all over your diving mask. Then, just as quickly as you entered the halocline, you swim out of it back into crystal clear water and the world, thankfully, jerks back into focus. It’s absolutely disorienting and kinda fun. 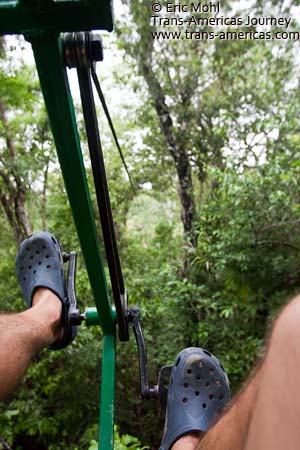 Eric’s view from the seat of his Sky Cycle through the jungle at Hidden Worlds Cenotes Park.

An innovative adventure park in the Yucatán

Another way to play in cenotes is at the numerous adventure parks in the Yucatán Peninsula. We were impressed with the serious fun at Hidden Worlds Mayazone Cenotes Park when we went diving with them in Dos Ojos. Then we learned that this park, one of the very first in the area, has not one but two rides found nowhere else in the world.

That’s easy to do when your founder and current co-owner is not just a world-class cave diver/adrenaline lover but a pretty badass (self-taught) engineer as well. Gordon “Buddy” Quattlebaum’s first invention for his Hidden Worlds park is a thing called a Sky Cycle. It’s essentially a modified bike that runs along a robust wire like that used for zip lines. You sit on the seat and lean back, recumbent style, then pedal your way above and through the jungle. 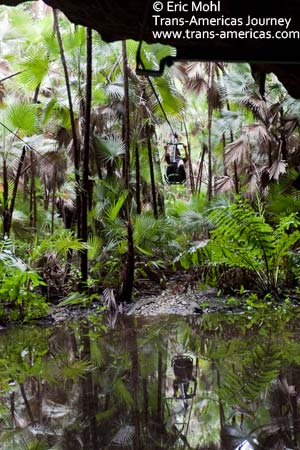 The other ride that’s exclusive to Hidden Worlds is a creation Buddy calls the Avatar, claiming it’s the world’s first roller coaster zip line. Lucky (?) for us, Buddy was debuting the Avatar at  Hidden Worlds the day we were there and we got to take part in some “test rides.”

Once harnessed in we were attached to the ride a standing position–just as if we were about to take a traditional zip line ride. Unlike traditional zip lines, however, the Avatar runs on a rigid rail like the ones that roller coasters run on. This rigidity gave Buddy and his team the ability to bend and curve the rail incorporating steep drops, swift climbs, vertebrae-jarring hairpin turns and other features normally associated with a roller coaster.

It’s a quick ride but a dramatic one and it culminates by dropping riders through a dark tunnel into the  mouth of a cenote where you descend at full speed through a winding, dark route for roughly 50 feet (15 meters) before splashing down into the water.

Our slide shows, below, demonstrate just what the heck the Avatar is all about. The first one shows a random Hidden Worlds guest. The second slide show is of Karen who, by the way, hates roller coasters. Suffice to say it’s a good thing there’s no sound with this…

Occupying the other end of the Yucatán Peninsula adventure park spectrum is Xel-Ha. Xel-Ha, and her sister parks Xcaret and Xplor, dominate the scene with relentless advertising–not unlike a Yucatán version of Disneyland. The approach works.  Xel-Ha alone averages 2,000 visitors (vs a couple hundred at Hidden Worlds) every day.

Xel-Ha also has some impressive eco initiatives in place to reduce the impact of all of those visitors. You will never be given a paper bag. Or a straw. Or a map. Or a plastic water or soda bottle at Xel-Ha. Map billboards dots the vast property, soda and water are dispensed from big machines in to bio-degradable recycled-paper cups and straws simply aren’t allowed. Or necessary. Still, the park generates 4,000 pounds of trash a day which is recycled or composted. 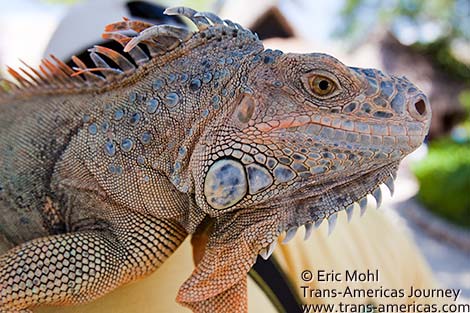 This enormous multi-hued bad boy on display at Xel-Ha was definitely a supermodel among iguanas.

A massive nursery on the park’s property grows a range of indigenous plants which are used to keep the park grounds lush and are also donated to area villages where park employees live. We were also happy to see a permanent policy of offering all residents of Quintana Roo 50% off admission to the park.

The quality of the snorkeling gear for guest use was also surprisingly high. Ditto for the food. The only disappointment was the lack of fish in the water. We snorkeled and snorkeled in the cenote-fed waterways of Xel-Ha but failed to find much life at all. Still, we had a really relaxing day at Xel-Ha (the hammocks! the beer!) and we were glad that we’d been advised to come early. Between the buffet and the snorkeling and the bike trails and the inner tube float we were there from opening to closing. 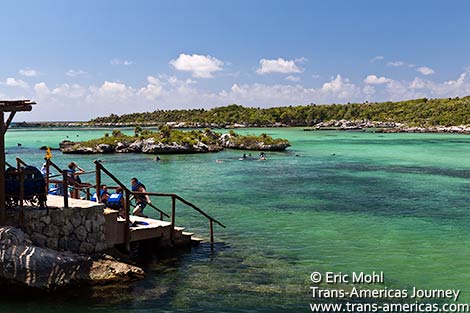 Xel-Ha, where a massive network of natural water features have been tamed just enough to let thousands of people a day enjoy them.

Yes, Crocs are they’re the ugliest shoes on earth. But they’re the perfect sturdy, non-slip, lightweight footwear for getting into and out of cenotes and for exploring the area’s watery adventure parks.

And no matter which cenote you jump into, skip the sunscreen and the insect repellent. Even the bio-degradable versions leave an ugly and toxic slick on the top of the water over time.