Ambergris Caye is the most famous island destination in Belize so we had to check it out. Use our Island Travel Guide to plan your own trip to Ambergris Caye including culture water sports, and one of the chicest boutique hotels in Belize. 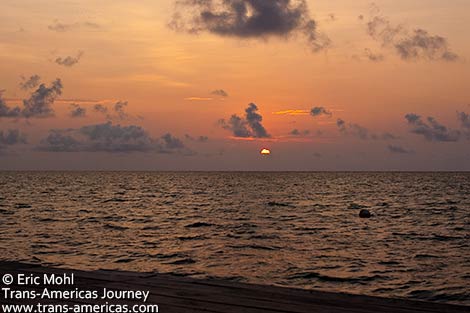 Getting to Ambergris Caye

In this era of increasingly painful airline travel, we have been very grateful that we’re on a road trip. However, there are times when flying is the best option. Luckily, flying to San Pedro on Ambergris Caye in Belize via Tropic Air was a delight. Our flight was low key, easy, efficient, comfortable, and scenic and delivered us to a world of sky, sand, sea, sun, and sharks.

We arrived at the municipal airport in Belize City about 10 minutes before our flight was scheduled to leave. After checking in at the Tropic Air desk in what was, essentially, a tool shed with lights, we cleared security by flashing some i.d. and then we got our boarding passes–big re-usable color-coded cards.

In the last of a downpour, we climbed on-board a plane that was so small it looked like we could pick it up if all of the six assembled passengers worked together. Once on board we got no big safety speech, no lame crew jokes (it’s a plane not a vaudeville show people), no chummy introduction from the captain, no infuriating announcement that there will be no food/pillows/blankets/magazines/cabin pressurization.

By the time we’d fastened our seat belts, we were already pulling onto the runway. For the next 15 minutes, we cruised low and steady over the clear blue water to the San Pedro airport where we landed without circling even once.

Check out our in-flight video, below, and see for yourself:

The new Tropic Air terminal in San Pedro is substantially more sophisticated than its tool-shed counterpart in Belize City. There’s A/C, a big tubular aquarium, and the 208 Lounge upstairs (named after the Cessna model the airline mainly flies) which promises “Not airport prices. Keeping it local!”

If you’re picturing the town of San Pedro or the island of Ambergris Caye as some kind of undiscovered hideaway where you’ll string your hammock between a couple of palms and live off of coconut water and fish you barter for with local fishermen you’re more than a decade too late.

Modern San Pedro is a developed tourist destination with all that implies from guest houses to coffee shops to souvenir stores to guides plying their services to drink specials and ladies’ nights. It is not unpleasant–the streets are still walkable and the vibe is still low key and the beach is still gorgeous. At the end of the day, San Pedro is still the kind of place where the local greeting is “Smile! You’re on vacation!”

What to do on Ambergris Caye

One of the biggest draws of Ambergris Caye is the chance to get in the water in the Hol Chan Marine Reserve with a wide array of sea life including sharks and stingrays which thrive in the shallow, warm, fish-rich protected waters of the reserve.  Hol Chan Marine Reserve, the oldest marine reserve in Belize, covers about three square miles of ocean and reef and the reserve is divided into four zones.

We spent the afternoon of our first day on Ambergris snorkeling around Zone A, the Hol Chan Channel.  The water was shallow and clear and warm and we had a lovely time with fish, sea turtles, moray eels, eagle rays and other reef creatures.

Check it out in our snorkeling video, below:

Next we went to Zone D in the Hol Chan Marine Reserve, a place called Shark Ray Alley. True to its name, nurse sharks and southern stingrays congregate here in large numbers. 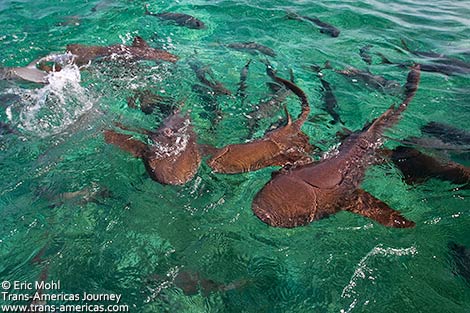 Nurse sharks looking for a handout around our boat as we arrive at Shark Ray Alley. These small-mouthed, non-aggressive sharks look a bit like slugs with fins and their skin feels like sandpaper.

Marine life is attracted to Shark Ray Alley because local fishermen have cleaned their catch at this spot for decades and the animals have become accustomed to an easy meal of scraps. Whenever a boat approaches the sharks, fish and rays swarm assuming its a fisherman about to toss some delicious fish guts into the water. As we prepared to jump in and snorkel around the water was thick with nurse sharks.

Such a high concentration of wild animals of any sort gets your attention. Make them sharks (even gentle nurse sharks) and you get our full attention. Once in the water, we were able to snorkel among the nurse sharks, who seemed almost bored of humans.

Check out our Shark Ray Alley snorkeling video, below, to see some of what we saw.

Over the next two days, we were back in the water doing some SCUBA diving. There are many dive shops on Ambergris Caye but we chose to Ecologic Divers for a number of reasons including the fact that they really are trying to be a green diving company. They sponsor clean-up projects and offer free dive instruction to local high school students who participate, for example. We also liked the large number of locals they employ at every level and the playful professionalism of the owners and dive masters. 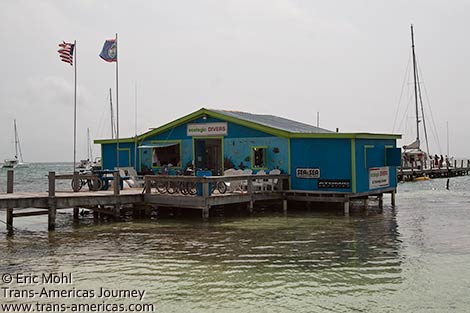 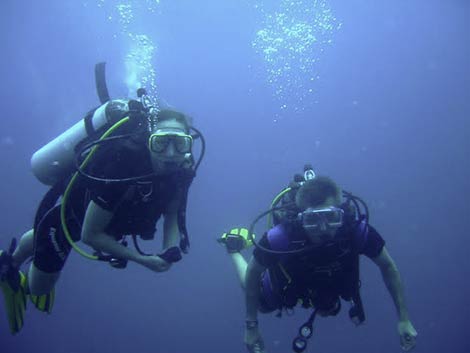 Here we are SCUBA diving off Ambergris Caye, Belize.

Our second day of diving took us to the Tiburon Canyon dive site where we saw five nurse sharks in the first three minutes of the dive plus a loggerhead turtle. We finished up with The Tackle Box, a dive site that was teeming with colorful reef fish–the most we saw on any of the four dives we did in the area. 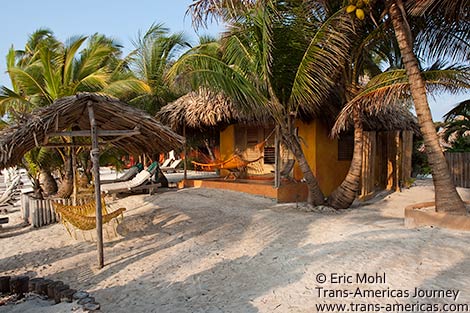 Where to sleep on Ambergris Caye

Toward the far northern end of Ambergris Caye, past San Pedro and the thick of the hotel and resort developments (some of them resemble horrid condo buildings), things begin to thin out a bit. That’s where you’ll find Matachica Beach Resort. 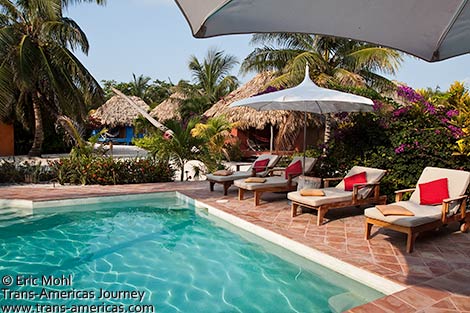 One of the two pools at Matachica Beach Resort.

We were picked up at the airport by hotel staff in a golf cart (love those things) then we got on one of the hotel’s boats for the 10-minute ride along the coast of the island to the resort itself. It’s always a good sign when they take your welcome cocktail order and radio it in so it’s waiting for you when the boat docks and our time at Matachica just got better from there.

Our Mares masks and fins and our Oceanic regulators and dive computers. Ecologic Divers happens to have top-shelf, clean, well-maintained gear in its rental room but many dive shops don’t.

We fit right in wearing our Costa del Mar sunglasses–everyone from our Tropic Air pilot to boat captains to dive masters wore Costas to cut the glare off all that water.

A waterproof housing for our Flip video camera (good up to 30 feet / 10 meters deep) which let us shoot the snorkeling video in this blog post. 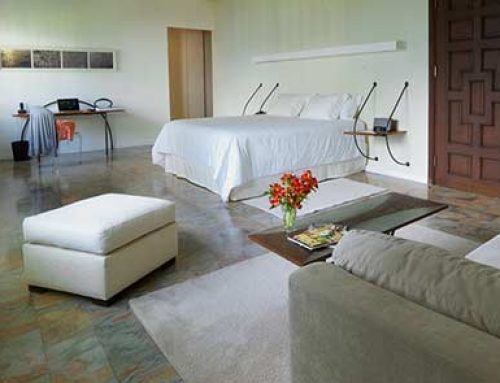 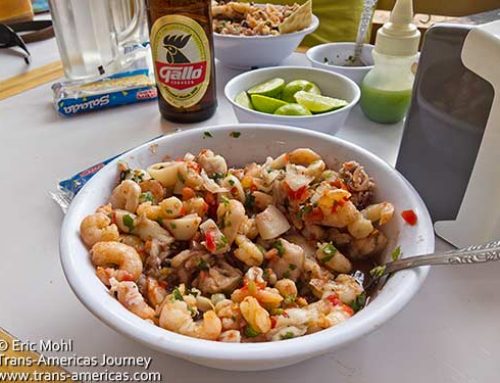 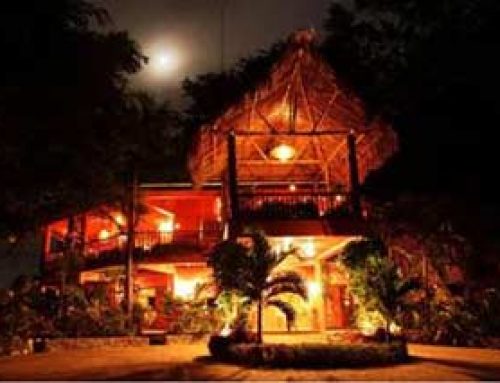 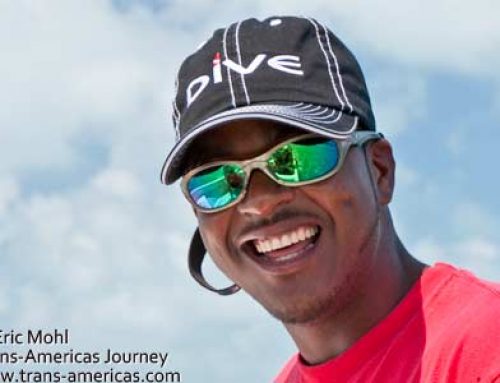 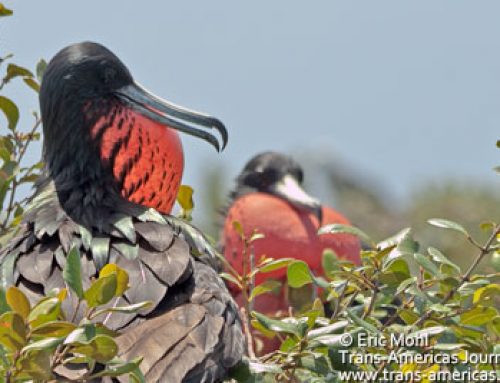 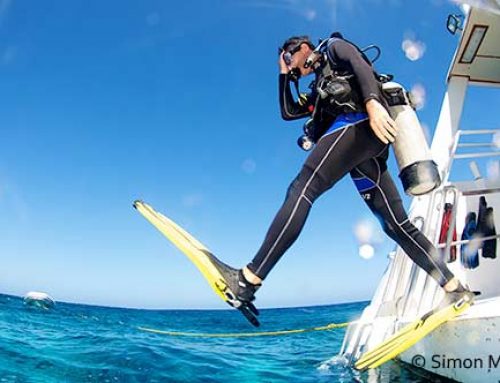 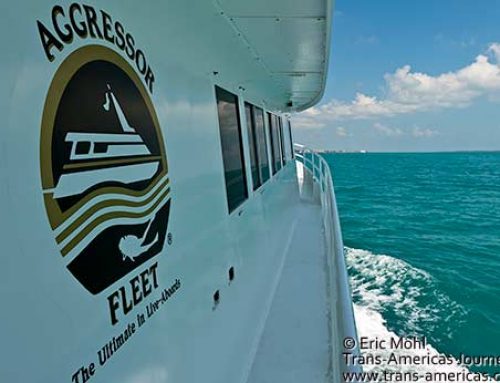 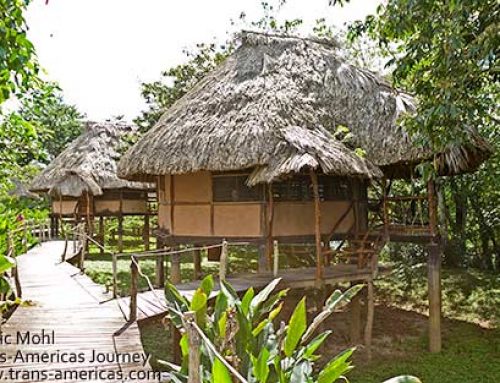 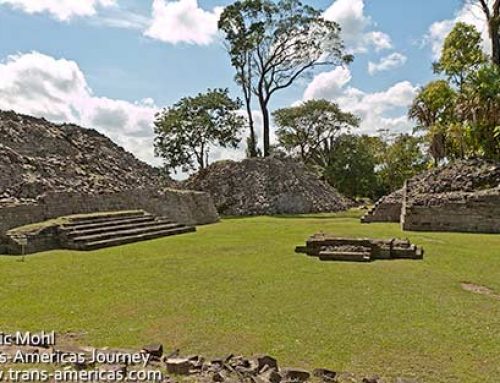