The Andean condor is the national bird of Ecuador and the Antisana Ecological Reserve is home to the greatest number of Andean condors in the country. 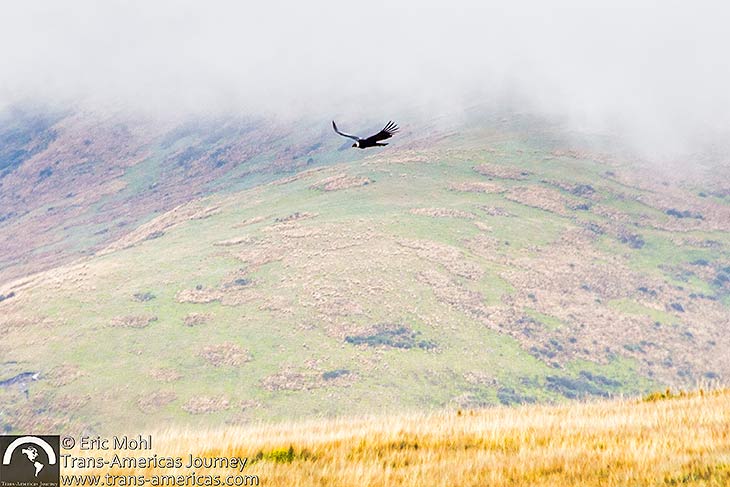 An Andean condor soars over the Antisana Ecological Reserve in Ecuador.

The Antisana Ecological Reserve (free entry) is located about three hours from Quito. It was established in 1993 and it protects 296,526 acres (120,000 hectares) of land that condors love: high altitude, plenty of rocky cliff faces for nesting, and wildlife and cattle to provide food. The Andean condor is the largest flying bird in the world is considered “near threatened” by conservation groups. However, we were told that 28 individual Andean condors were counted in the Antisana Ecological Reserve in 2011. 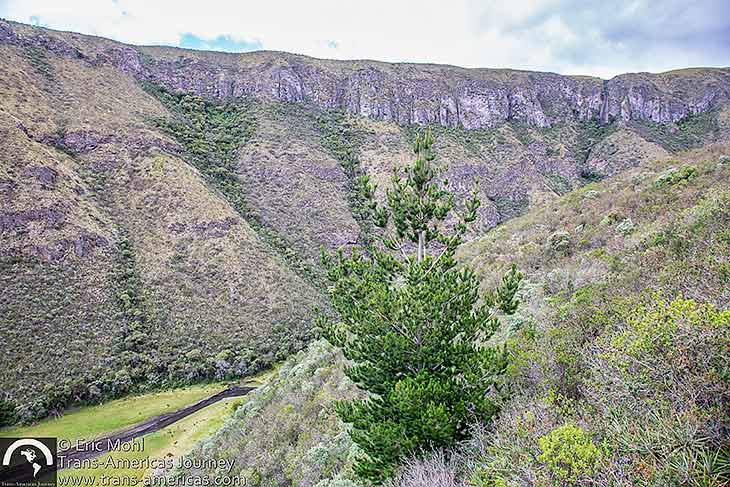 Andean condors love to nest in the rocky cliffs in and around the Antisana Ecological Reserve.

You enter the reserve by passing sheer cliffs carved by the Isco River where condors nest. The reserve is anchored by the Antisana Volcano which towers 18,847 feet (5,753 meters) above everything else. The volcano can be climbed by those with the appropriate skills. The reserve also has a handful of short trails and there’s a 165 mile (50 km) trail connecting Antisana to Cotopaxi National Park. Tour companies also offer biking and fishing trips to the reserve. 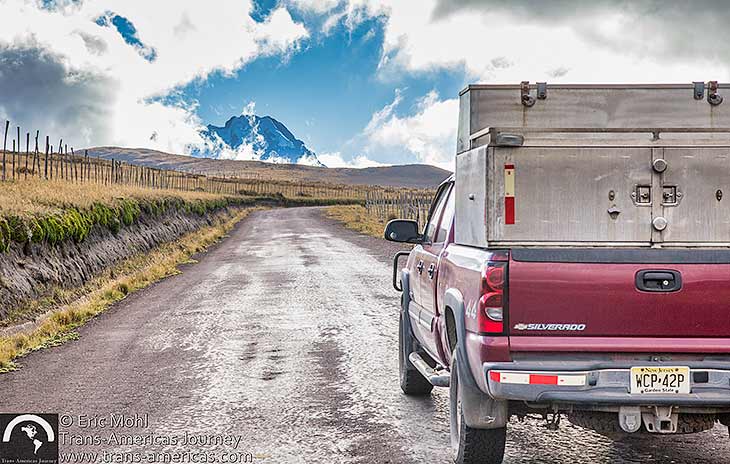 The weather was cold and drizzly when we were there, but we hiked the loop trail around part of Laguna Mica, which supplies water to the city of Quito. Be prepared for the altitude (the lake is at about 13,400 feet or 4,080 meters) and allow at least an hour. Also, be prepared for changing weather. 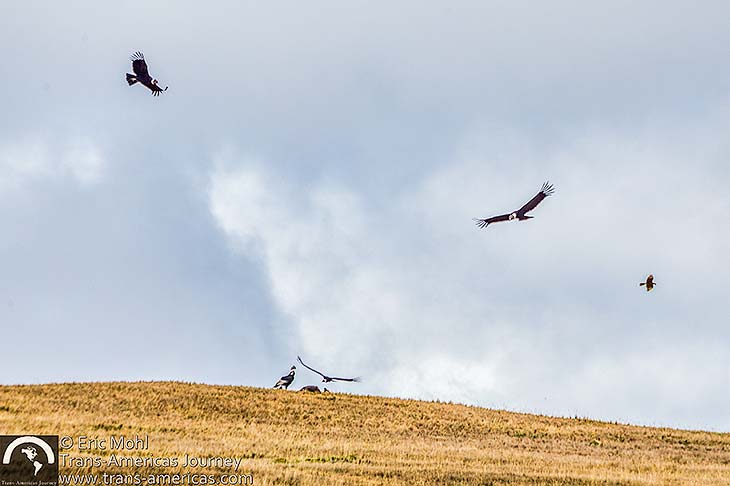 Just a few of the 10 condors we saw in and around the Antisana Ecological Reserve. These are competing with cara-caras for the remains of a carcass.

After our lake walk, we saw four condors circling in the air, then spotted two more on the ground around a carcass. The scavengers picked at the remains along with more aggressive cara-caras. Along with the Andean condors, Antisana is home to more than 400 species of birds, 73 types of mammals (including spectacled bears, dwarf deer, pumas, and wolves), and 61 amphibians and reptiles live here including the reserve’s own species of amphibian, a small brown toad called Antisana’s osornophryne. 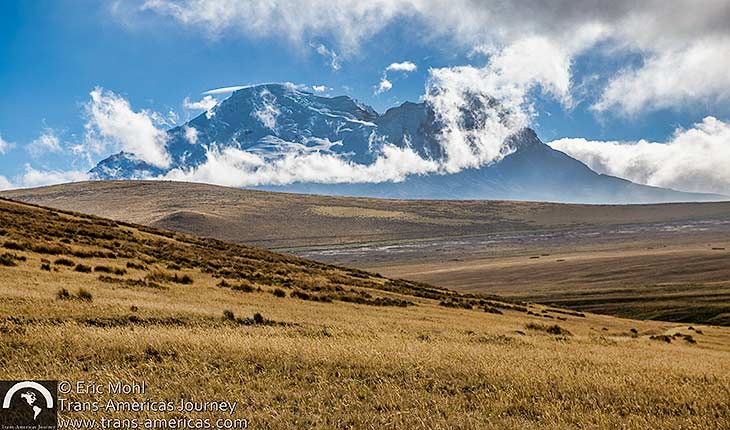 But it was the condors we’d come to see and we were not disappointed. All told we saw more than 10 condors during our two days in and around the reserve.

Where to sleep near the Antisana Ecological Reserve

About 20 minutes from the entrance to the reserve and about 40 minutes from Laguna Mica is Hosteria Guayatara. Close to the lodge, we saw four condors circling in the air above us, so we pulled over to watch them for a while. The lodge, whose name means Hidden Water in the Quechua language, is at 11,600 feet (3,535 meters). It has a huge and popular restaurant, a play area for kids, fishing, and horseback riding. Hosteria Guayatara also offers a wide range of rooms from family cabins to suites with jacuzzis. You can also camp here. 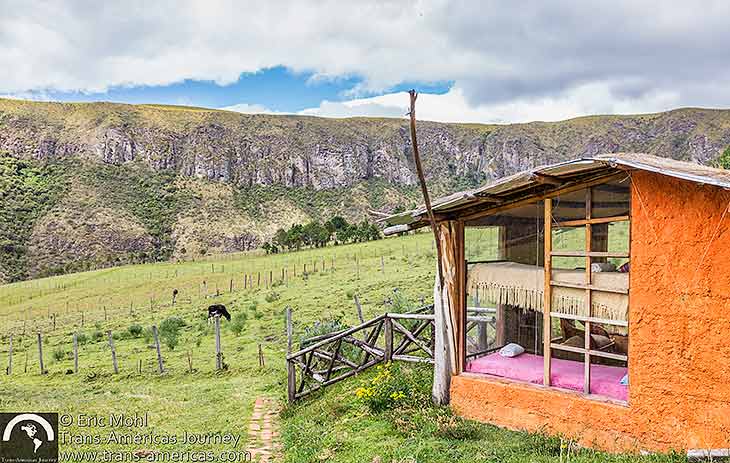 Tambo Condor is a great place to stay or to get a meal and look for condors.

Tambo Condor offers basic rooms and a restaurant serving traditional dishes along with views of a rocky cliff across a chasm where condors frequently nest, circle, and land. We saw a pair in the sky that had been frequenting the area, then watched them land in their nest where a chick awaited. Tip: we were told that the condors tend to come home to roost around 3 pm. 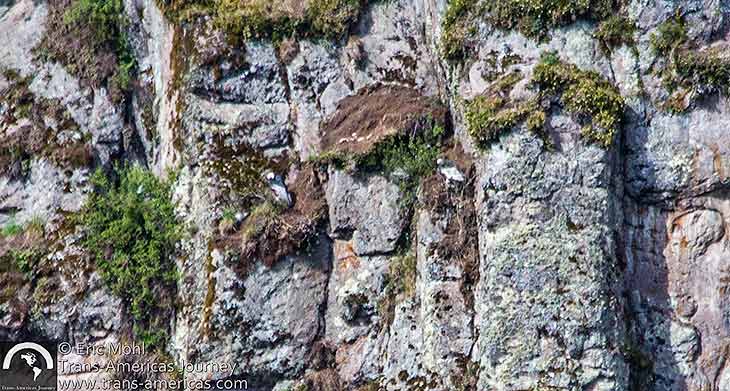 Look closely. There are two Andean condors perched on these rocks near a nest.