A trio of archaeological sites–Cumbe Mayo, Ventanillas do Otuzco, and Ventanillas de Cumbayo–offer wonderful examples of Pre-Incan aqueducts, petroglyphs, and funerary niches for travelers looking for day trips around the city of Cajamarca. 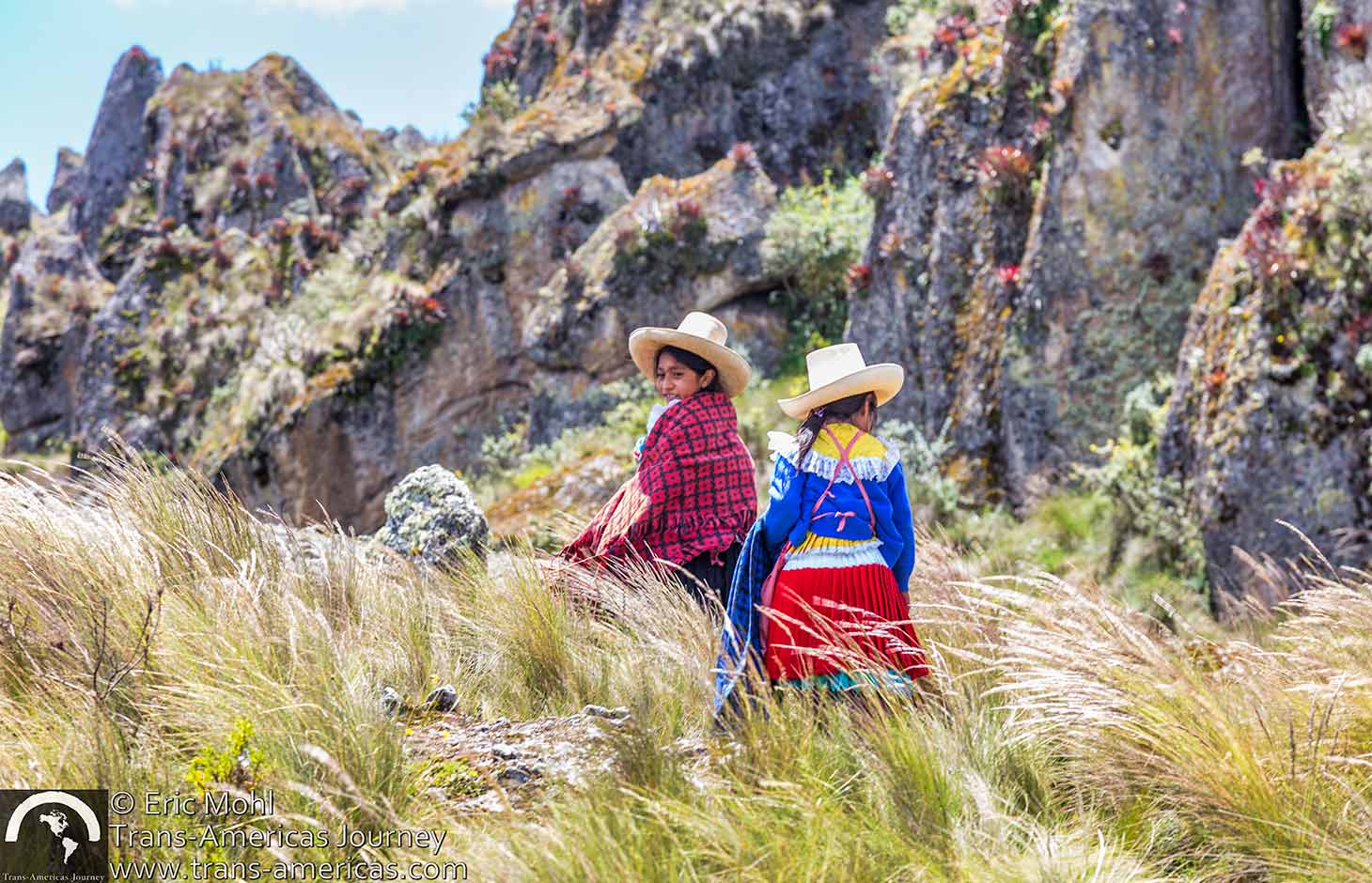 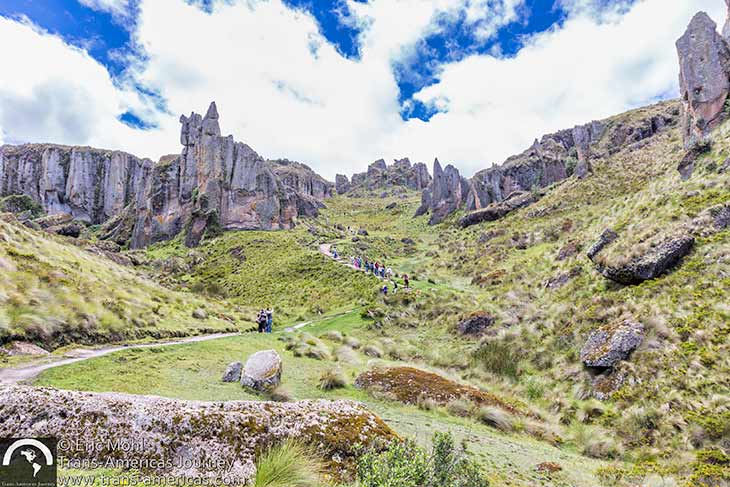 Part of the loop trail through the Cumbe Mayo archaeological site in Peru.

A loop trail takes visitors pasts volcanic rock pillars, some as high as 60 feet (18 meters), called Los Frailes (The Friars). There are petroglyphs on these pillars and in small caves in the area. 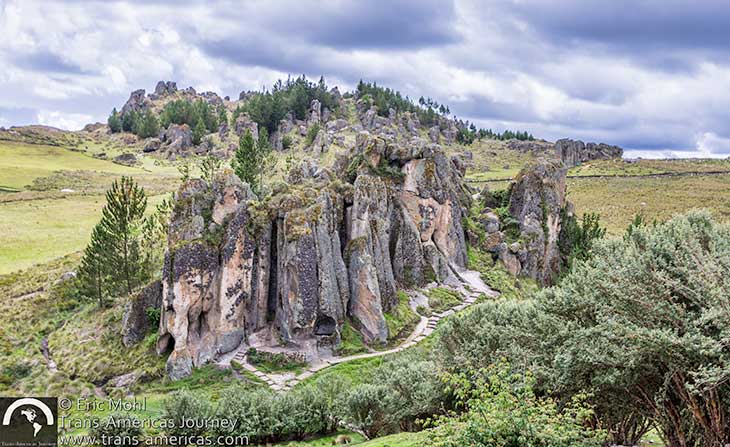 Look for petroglyphs carved into the Los Frailes rock formations at the Cumbe Mayo archaeological site.

The trail continues down to an elaborate aqueduct system that was cut out of volcanic stone thousands of years ago. 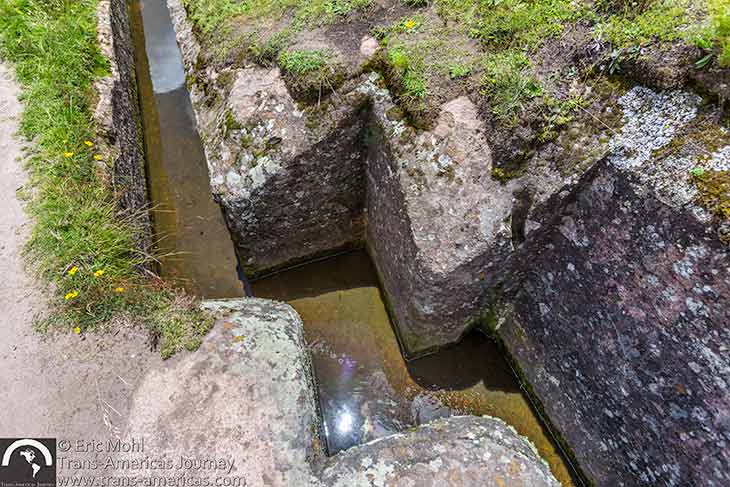 These precise zig-zag sections in the hand-carved aqueduct at the Cumbe Mayo archaeological site may have been used to slow the flow of water.

The pre-Incan manmade waterway is 5.5 miles (9 km) long and features incredibly straight sections, elegantly curved sections, and precise zig-zag sections thought to have slowed the flow of the water. 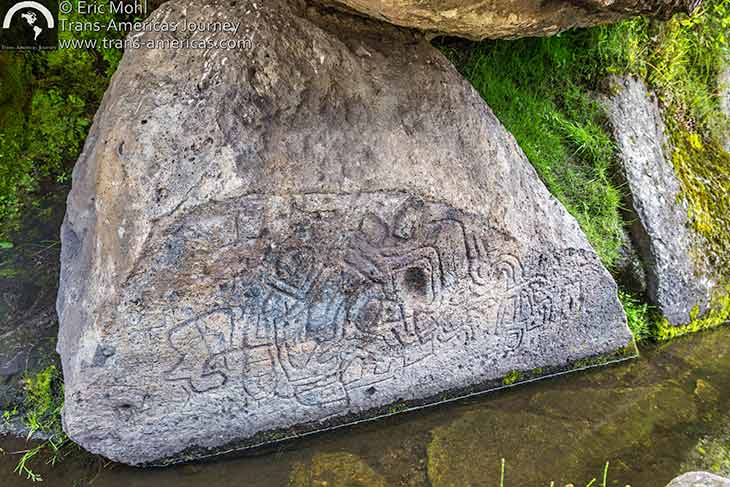 A petroglyph at the Cumbe Mayo archaeological site.

The Cumbe Mayo archeological site is only 12 miles (20 km) from the city of Cajamarca, but the road was so rough and full of rocks and potholes that the short journey took 1.5 hours. Along the way, we crossed the continental divide. 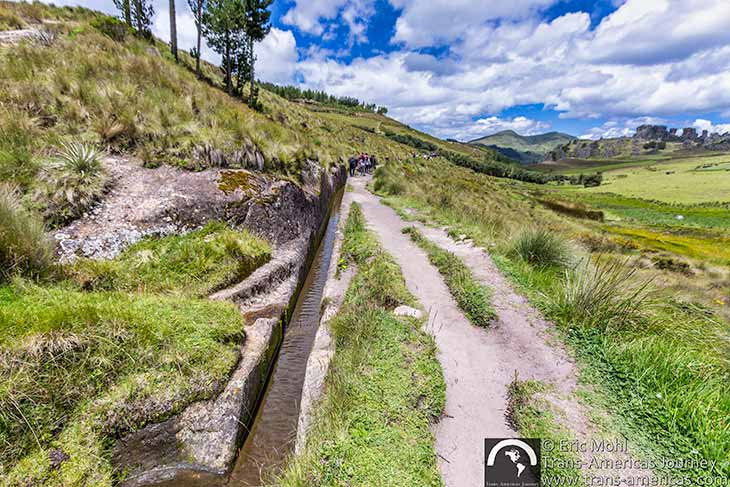 Many sections of the hand-carved aqueduct at the Cumbe Mayo archaeological site seem impossibly straight.

There is a secure parking area and bathrooms at the Cumbe Mayo site (8 soles per person or about US$2.25). We thought there was a museum at the site too, but when we were there all we saw were a lot of new empty buildings which were all locked up.

The word ventanillas (little windows in English) likely refers to the window-like appearance of the niches. Visitors can easily walk to within a few feet of the niches and peer inside the now-empty burial sites. Informational signs are in Spanish and English. Plan to arrive in the morning for the best light for photography. 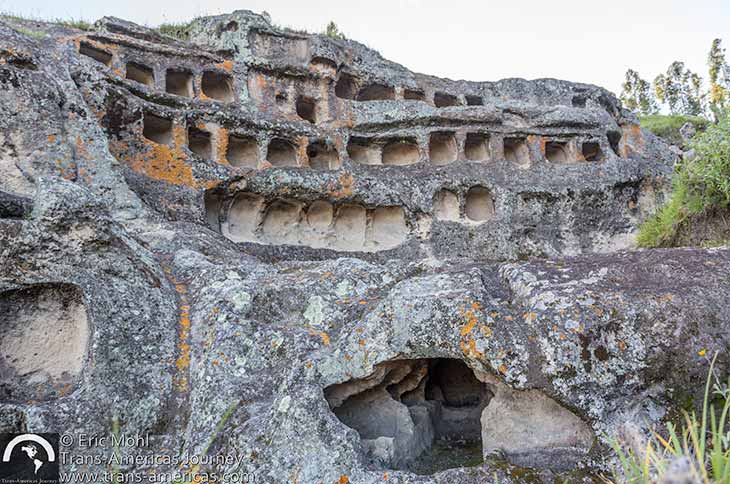 About 17 miles (27 km) from the city of Cajamarca and 11 miles (17 km) past the Ventanillas de Otuzco site, you’ll find the Ventanillas de Combayo archaeological site (allow more travel time than the mileage suggests because the road can be in bad condition).

There are hundreds of burial niches carved into rock faces at the Ventanillas de Combayo archaeological site in Peru.

When we were at the Ventanillas de Combayo site there were no signs nor was there an obvious entry point. Be on the lookout for a road marker that says 17 km. About 100 feet (33 meters) before that sign, we took a dirt road to the left past fields and farm animals until we reached a crudely dozed area in front of a family’s house. 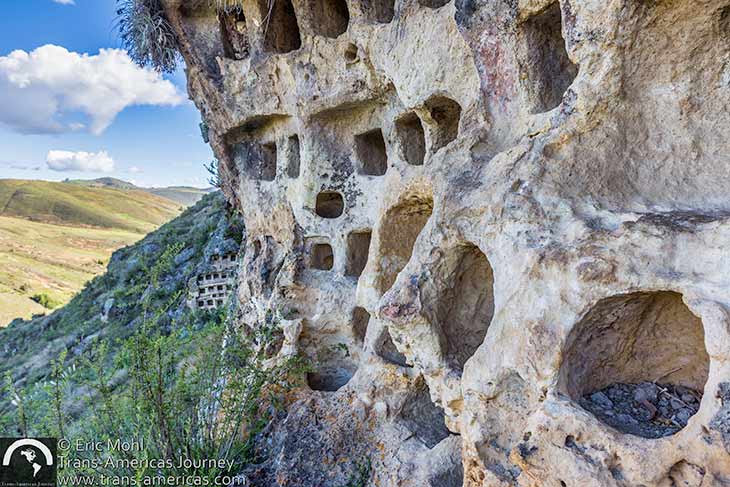 A trail takes visitors quite close to the niches at the Ventanillas de Combayo site.

After parking in front of the house, we walked past the home and into a lush cattle pasture full of clover, grass, blackberry vines, and even a babbling brook. Then we walked over a stone wall toward a wall of rock in which burial niches were carved thousands of years ago. 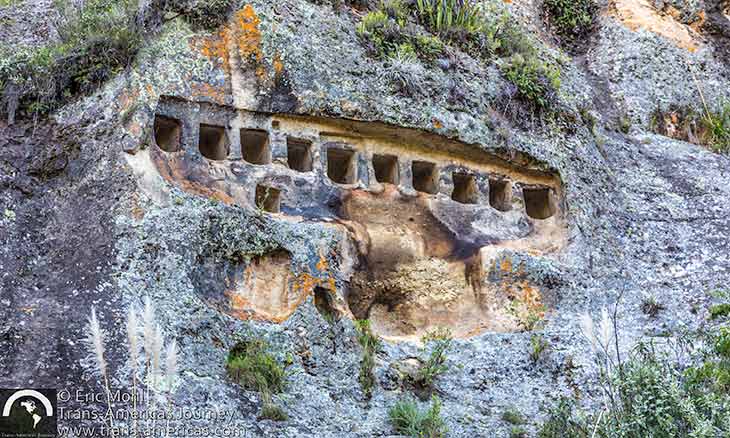 There are hundreds of niches here and it’s the largest collection of burial niches in the area. A trail and a set of steps carved into the stone take you up to the base of some of the niches. We were alone at the site and all those burial niches were kind of spooky. As we left, Karen asked a local woman if there were any ghosts in the area. She assured us there were not. Arrive in the morning for the best light for photography.