The lovely city of Cajamarca, Peru is home to colonial architecture, nearby hot springs once used by the Inca, elaborate churches, and the oldest working fountain in Peru. It’s also the place where Spanish conquistadors killed Atahualpa, the last great leader of the Incan empire. Use our City Travel Guide to plan your trip to Cajamarca. 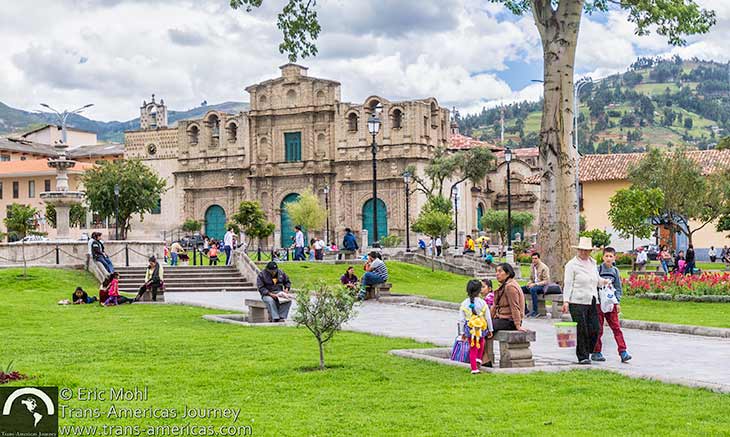 The main plaza in Cajamarca, Peru.

What to do in Cajamarca

Cajamarca (called Kashamarka, Cashamarka, Caxamarca, or Qasamarka in the local Quechua language) has been inhabited all the way back to the early 1300s. The city was conquered by the Inca in the 1400s and Spanish conquistadors arrived in the 1500s. Fun fact: Author Carlos Castaneda was born in Cajamarca. 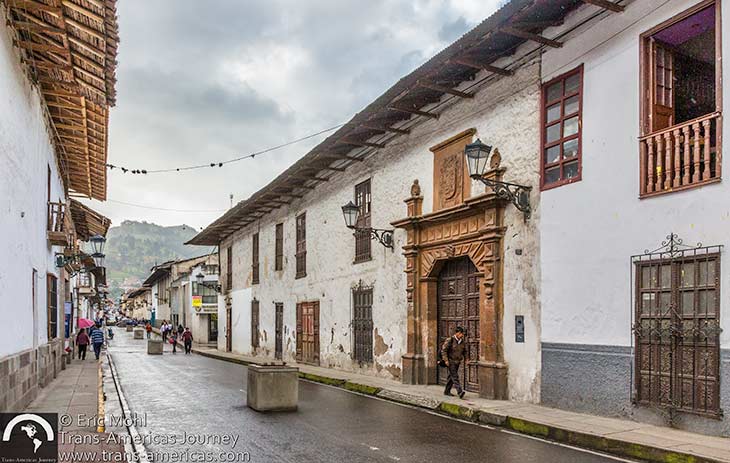 Colonial architecture and some pedestrian-only streets make wandering the streets in the center of Cajamarca a pleasure.

The center of the city is free of the loud and reckless motos that zip around other parts of Cajamarca and there are quite a few pedestrian-only streets. 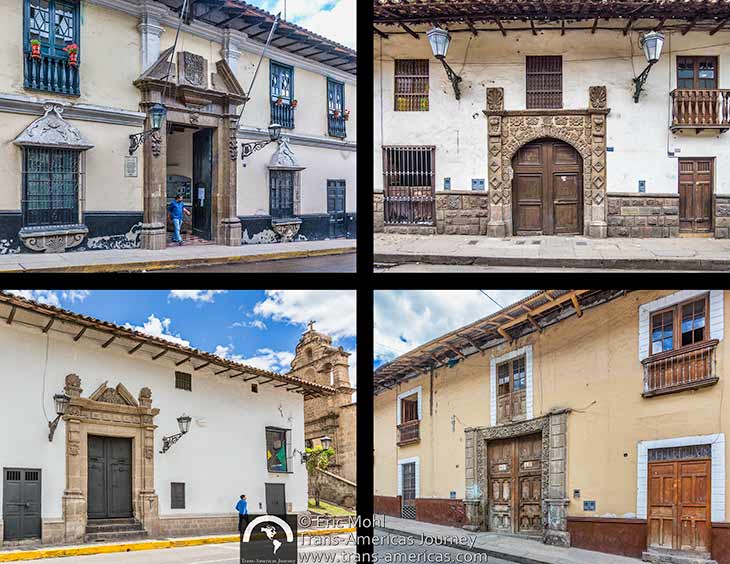 This makes walking around the center to admire the city’s colonial architecture a pleasant pastime. Just take it easy. Cajamarca is located at just shy of 9,000 feet (2,743 meters) and many travelers feel the altitude. Here are some other things to do in Cajamarca. 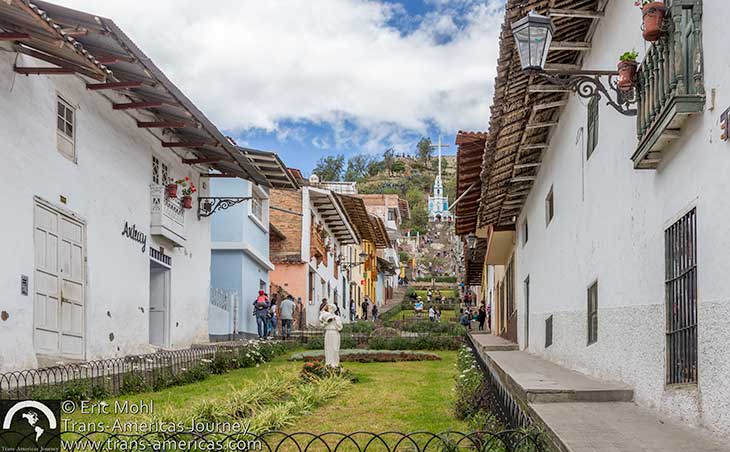 You can walk up this short hill in the center of Cajamarca to visit a small shrine to Santa Apolonia. We’d never heard of her either.

Most of the structures built by the Inca when they ruled the region were destroyed by Spanish conquistadors who used the stones to build churches. The one Incan structure that survived is a doozie. El Cuarto Rescate (The Ransom Room) is an imposing example of the Inca’s skill at perfectly fitted, mortar free stone construction (5 soles, about US$1.50 per person including entry to the Museo de Arqueologico & Ethnografia and the Iglesia Belen and museum). 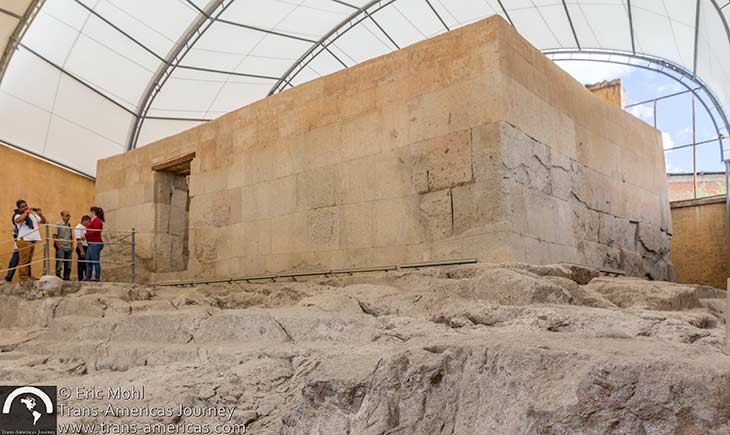 El Cuarto Rescate, or The Ransom Room, is the only Inca structure that remains in Cajamarca.

Inside the rectangular room, there is a line on the wall that is said to mark the height of the gold and silver ransom that was stacked in the room exchange for the life of the Incan ruler Atahualpa. Some experts disagree, claiming that the ransom for his life was never kept in the room, but that Atahualpa himself was imprisoned there before being strangled by the Spanish who tricked him into a meeting and ambushed him even after the massive ransom was paid. 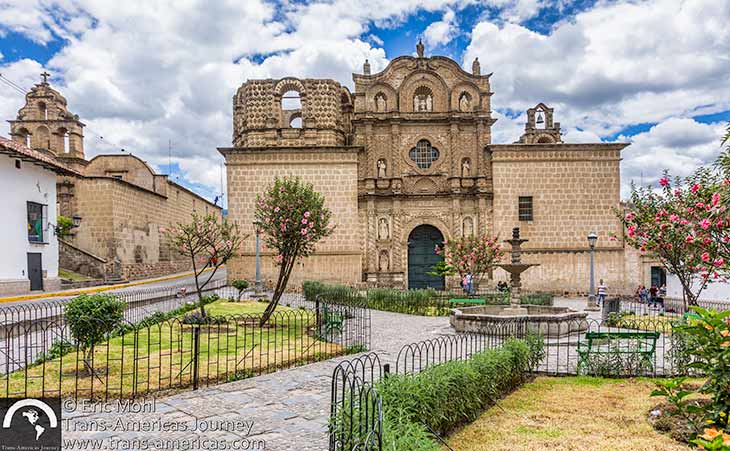 Plazuela Belen with the Iglesia Belen.

We can’t explain it, but the entranceway to the Museo de Arqueologico & Ethnografia (Musem of Archaeology and Ethnography, entrance included with your ticket from El Cuarto Rescate) includes a depiction of a woman with four breasts. Once inside this museum, which is in a former hospital, you’ll see a collection of pottery, textiles, and other treasures from cultures past displayed within tiny recessed cubbies that once served as hospital rooms for up to 31 patients. 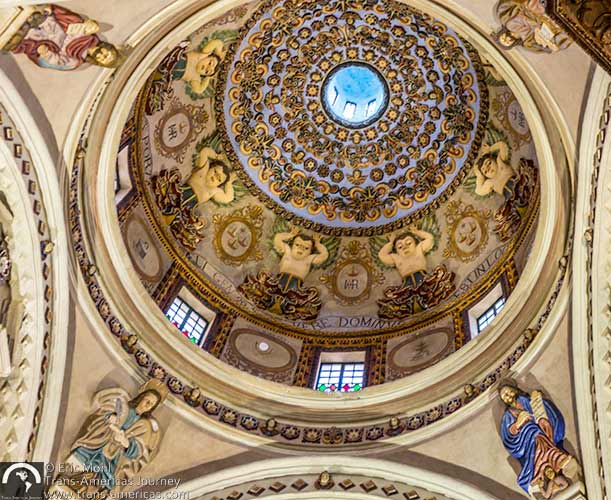 Cherubs holding up the weight of heaven in the Iglesia Belen.

Plazuela Belen is a particularly pretty and peaceful haven that’s anchored by the Iglesia Belen and its museum (entrance included with your ticket from El Cuarto Rescate). Iglesia Belen is a soothing place with muted colors, great lighting, and a lovely dome over the altar adorned with depictions of huge cherubs holding up the weight of heaven. 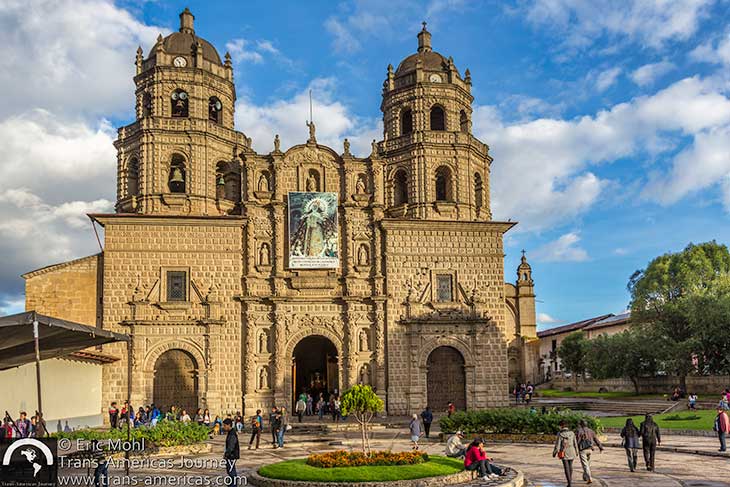 When we were at Iglesia Belen, the only thing to see in the museum at the church was a small exhibit of paintings by one modern artist. 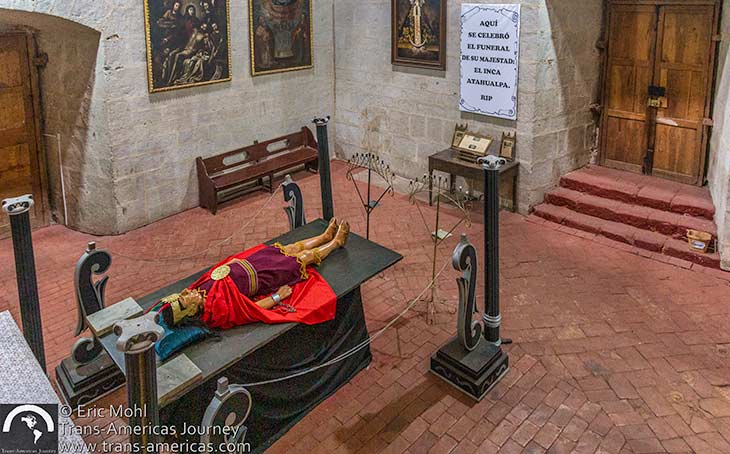 We were surprised to see this recreation of the funeral of Incan leader Atahualpa inside Iglesia San Francisco.

Iglesia de San Francisco (entry 5 soles per person, or about US$1.50, not including a Spanish-speaking guide) is full of religious art, vestiges, an odd recreation of Atahualpa’s funeral with the Incan leader lying in front of an altar (a very strange thing to see in a Catholic church), and old catacombs (which have been emptied) along with newer catacombs dating from 1910 where Franciscan monks are still interred. 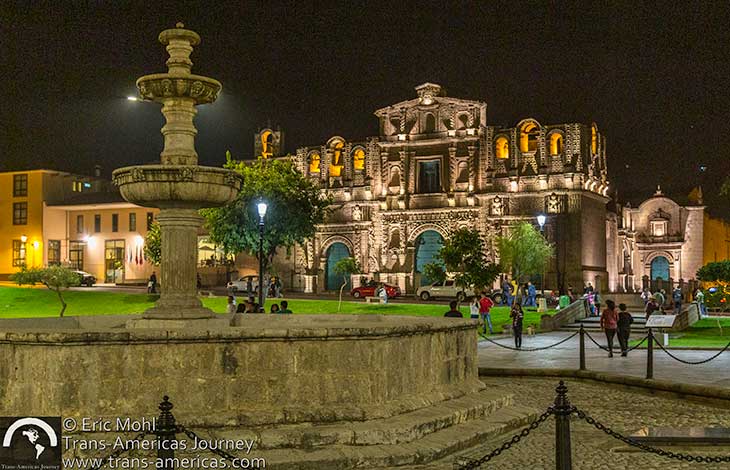 The cathedral in Cajamarca includes this stone fountain that dates back to 1699.

Like in most Latin cities, the main square in Cajamarca is called the Plaza de Armas. It’s a beautiful place with Iglesia San Francisco on one side and the cathedral–which took 80 years to build, was finished in 1762 and has an elaborately carved facade–on another. The Plaza de Armas is also home to a simple stone fountain which we were told dates back to 1699 and is the oldest working fountain in Peru. 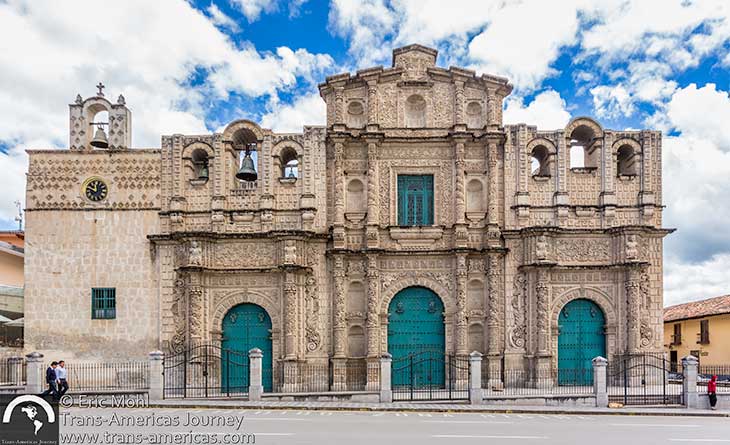 The carved facade of the cathedral in Cajamarca.

About 3.5 miles (6 km) from the city is a hot springs complex called Baños del Inca. Experts believe that the Incan ruler Atahualpa was a regular visitor, though other cultures that pre-date the Inca also used the springs. The complex includes a recreation of what experts believe was Atahualpa’s bath. 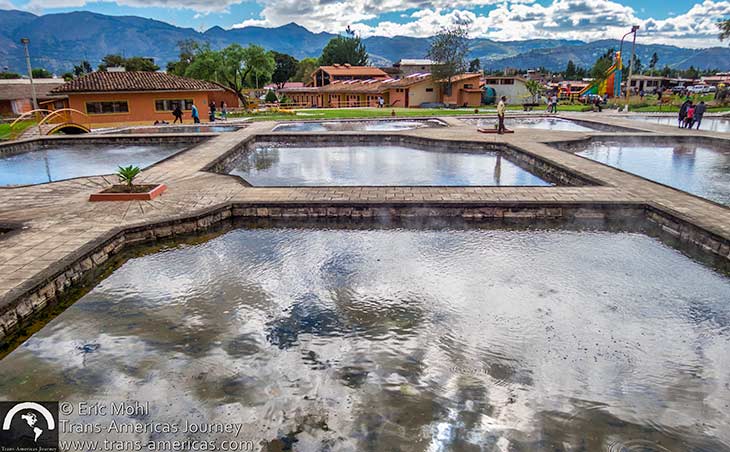 A large and vigorously bubbling pool holds the source water that’s 158 degrees F (72 degrees C). You can’t get into that pool, obviously, but there are many other options for soaking in the naturally heated water that’s full of minerals and algae.  Many people believe the water to be medicinal and visitors to Baños del Inca can choose to soak in large communal pools, fancy private pools, basic private pools, or private Jacuzzis.

Experts believe the pool inside this building was used by Incan ruler Atahualpa.

We went for a Poza Imperial (Imperial Pool) where 6 soles per person (about US$1.75) included a 30-minute soak in a private pool within a clean, tiled, private room. The pool was cleaned between each use and is then re-filled when you enter so that you can control the hot and cold taps to get the temperature you want. A skylight helps counter the slightly claustrophobic feel of the room. 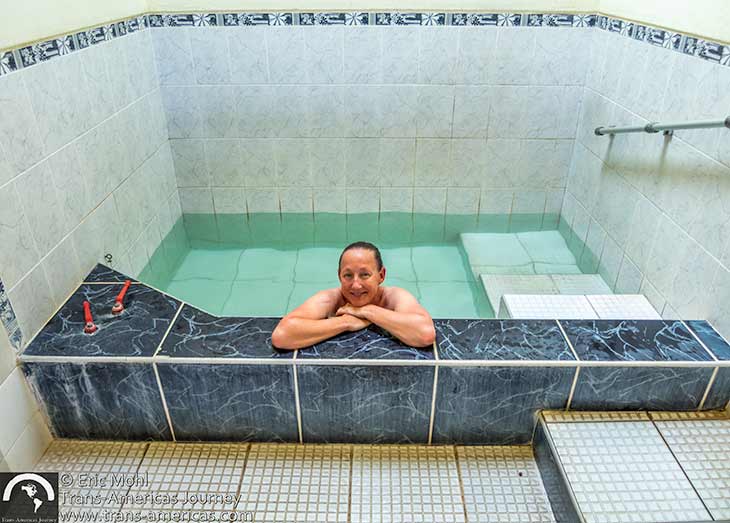 The hot springs complex also includes a juice stand and a restaurant that doesn’t have jacked up prices (around 12 soles or US$3.50 for a meal). A bus ride from the center of Cajamarca goes to the hot springs in about 20 minutes. Bring drinking water, a towel (the ones sold onsite are thin and polyester), and a non-breakable container to use to pour cold water over yourself to refresh and rinse off. 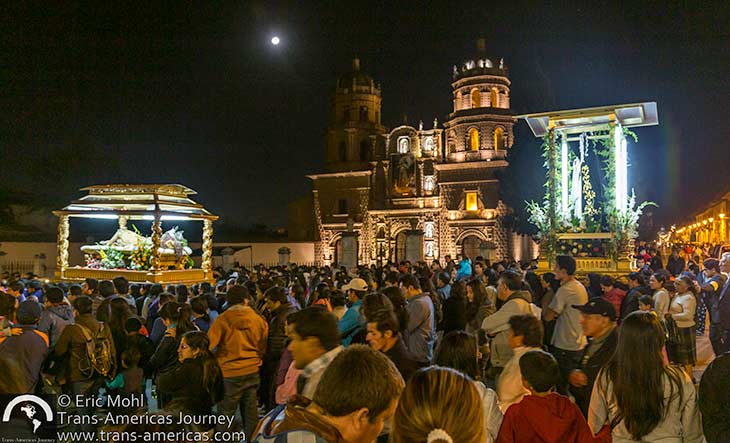 Floats carrying the Virgin Mary and Jesus converge at a church during Semana Santa celebrations in Cajamarca.

Our visit to Cajamarca coincided with Semana Santa Easter celebrations. This meant that town was crowded and prices were holiday high. However, the actual Semana Santa celebrations were pretty low key. Nothing much at all happened until the Wednesday before Easter Sunday when we watched a nighttime parade during which one anda (float) carrying the Virgin Mary left from one church while an anda carrying Jesus left from another church. The two floats proceeded slowly through the streets then met up at a third church where the andas bowed to each other before carrying on to a make a joint visit at another church. 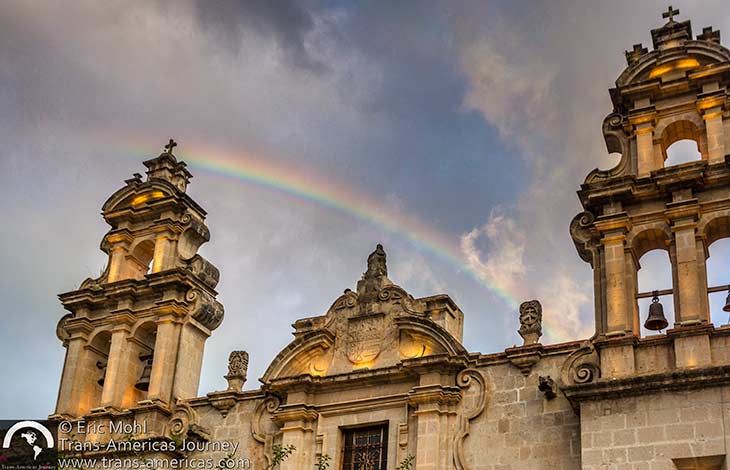 Where to eat and drink in Cajamarca

Tuna Café (named after cactus fruit which is called tuna in Spanish) is a great place for a full breakfast with plentiful eggs, fresh bread, great coffee, and awesome juice (10 soles or about US$3).

You just can’t beat an “old man bar” where style is scarce, the average age is high, and prices are low. In Cajamarca, a place called Mercado “Papi Riky” fits the fill with chilcanos (pisco and ginger ale), pisco sours, and Cuba libres in a no-frills (bad lighting, banged up furniture, old TV) liquor store setting for  5 soles/about US$1.50 each. 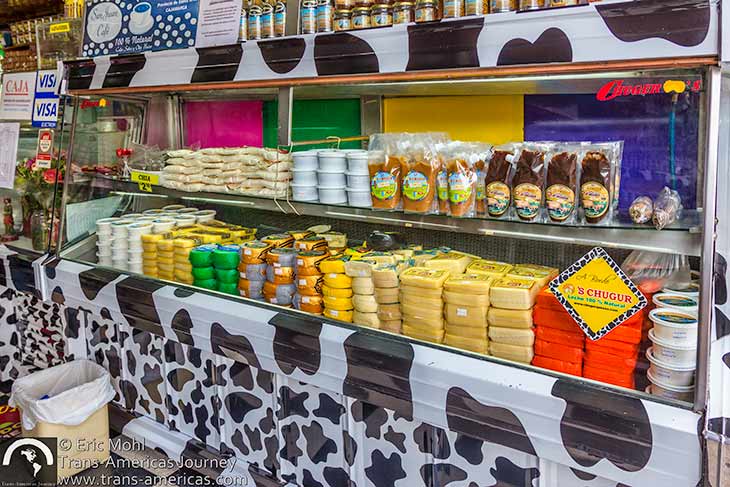 One of many stores in Cajamarca selling products made from milk produced by area dairy cows.

Another food note: there were more lacteos (businesses selling mostly products derived from milk including yogurt, cheese, etc.) than in any other city we’d been to. That’s because there are a lot of dairy cows in the area. Some of the lacteos even seemed to specialize in products made from milk from cows raised in certain regions. One lacteo called Fabrica Cinco Estrellas was the activist business with a conscience of the group and its shop was adorned with signs protesting the area’s mines which pollute the environment with cyanide and mercury.

Where to sleep in Cajamarca

There are many places to stay in Cajamarca in all price points. However, we were in town during Semana Santa which meant that most hotels and hostels in Cajamarca were fully booked or close to it and rates were high. We did manage to find a somewhat affordable place to stay, but because of the demand and price hikes associated with the holiday, we never found anything that we would recommend to you here.