It’s being called the biggest fireworks display in Mexico’s history and we believe it. For more than 15 minutes the sky lit up and the ground shook as hundreds of well-choreographed fireworks were let loose. And we got video. 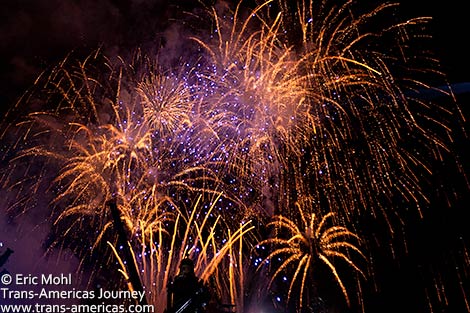 Just one moment in the massive Independence Day fireworks display in Mexico City, said to be the largest in the country’s history.

Fireworks included a bunch of fireballs that turned into spinners which were mounted on stands affixed to the façade of the massive Metropolitan Cathedral on the Zócalo, Mexico City’s main square.

About mid-way into the fireworks show, the wind shifted and began carrying smoke and ash created by the massive display right over the crowd, at times obscuring some of the light and color. But even that didn’t really dampen the effect.

See for yourself in our video, below, beginning with the “concert of flames” from the roof of the Presidential Palace. Pay close attention for a glimpse of Miss Universe, Mexico’s own Ximena Navarrete, who was on a balcony just above us. And near the end of the video you’ll see the white-haired Vicente Fernández on the balcony too, one of Mexico’s most iconic singers.

And if you haven’t already seen it, watch our video of President Felipe Calderón delivering the traditional ode to Hidalgo’s Grito Mexicano which sparked the Mexican War of Independence in the first place, and check out our best bicentennial moments.