There were beauty queens, fireworks, acrobats, a parade, politicians, musical icons, and tens of thousands of revelers including us and Mexican President Felipe Calderón who delivered the traditional ode to Miguel Hidalgo’s September 16, 1810 call to arms which sparked the Mexican War of Independence. It’s a speech  that’s delivered by the sitting President on the eve of every Mexican Independence Day, but this year’s 200th anniversary bicentennial celebration of independence from Spain made everything even more special.

No moment was more emotional than the traditional grito. From the balcony of the Presidential Palace on the Zócalo in Mexico City, the sitting President repeated a cry of patriotism, called the Grito Mexicano, which is based on the Grito de Dolores. Then the President rings the bell and the crowd goes wild.

Check it out in our video, below. 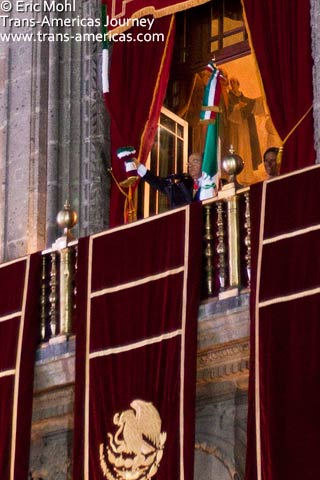 Mexican President Felipe Calderón rings the bell on the balcony of the Presidential Palace and issues the Grito Mexicano as part of Mexico’s celebrations marking 200 years of independence from Spain.

Around 6 am on September 16, 1810, Hidalgo, a Roman Catholic priest, ordered the church bells to be rung and he gathered his congregation. He then addressed the people encouraging them to rise up with these words:

My children: a new dispensation comes to us today. Will you receive it? Will you free yourselves? Will you recover the lands stolen by three hundred years ago from your forefathers by the hated Spaniards? We must act at once… Will you defend your religion and your rights as true patriots? Long live our Lady of Guadalupe! Death to bad government! Death to the gachupines!

The English translation of the 2010 version of the grito, as delivered by President Calderón earlier tonight, goes like this:

Long Live the Heroes that gave us our Fatherland!

Long Live the Centennial of the Revolution!