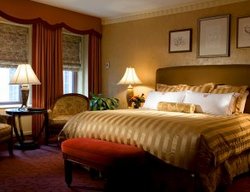 It’s rare that a hotel manages to satisfy both the business traveler and moms and dads, but Denver’s iconic Brown Palace Hotel & Spa does it with old-world style. Business travelers will appreciate the fact that the hotel is downtown Denver’s only Mobil four star property, the complimentary use of a Mercedes and driver in the mornings and evenings, the more spacious executive rooms on floors eight and nine and the complimentary shoe shine.

But you don’t have to arrive packing a baby or a briefcase to appreciate the unique charms of the legendary Brown Palace. 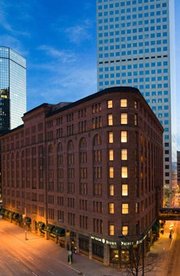 For example, when was the last time you looked forward to a glass of water out of the tap at a hotel? Exactly. But because the Brown Palace is built over its own private 720 foot deep artisenal well all water is sweet and pure—the bellman even fills a decanter for you as you settle into your room.

Originally opened with more than 400 rooms in 1892, the hotel now has just 241 rooms, 33 executive staterooms and three Presidential suites which means all accommodations are spacious. The hotel’s understated but charming service includes everything from delicious homemade macaroons and rose petals left on your pillow at turn down to shockingly fast valet service when you call for your car.

No wonder every US President since Teddy Roosevelt in 1905 (with the exception of Calvin Coolidge) has stayed here—and some really left their mark. President Eisenhower, for example, dented the metal fireplace in the Eisenhower Suite while practicing his golf swing. Other less Presidential marks have been made as well. The Beatles chose the Brown Palace—and now you can stay in the suite named after them which the hotel is considering upgrading to a fourth Presidential Suite—and The Rolling Stones arrived with more than 200 pieces of luggage for a two night stay in 2003. No wonder the twice weekly free historic walking tour of the hotel is so popular. 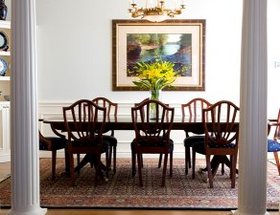 But even legends sometimes need a facelift and the Brown Palace is currently undergoing an $8 million renovation of its guestrooms. A complete soft goods upgrade was completed in May of 2007 and LCD flat screen TVs are now being added. Bathroom renovations—including new silver fixtures, dark wood cabinetry, European showers, marble and porcelain tile—began in 199 rooms in 2006 and will be completed by the end of 2008. Sadly, the top to bottom upgrade meant ripping out the classic black and white honeycomb tiles that have adorned most bathroom floors for years.

The hotel’s common areas are just as stylish and welcoming, starting with a lobby and soaring atrium that’s filled with floating notes from the lobby piano during daily afternoon tea service. Off the lobby is the hotel’s spa which features one of the biggest and most relaxing couple’s treatment rooms I’ve ever seen and features a small shop stocked with an extensive selection of beauty products (Mor, Kerastase, Phytomer and more). Of particular interest to visitors will be the spa’s hydrating products for skin and hair since there is precious little humidity in the mile-high air in Denver.

Big boys including The Ritz-Carlton  and The Four Seasons are coming to town in time for the upcoming Democratic Convention in August of 2008, but the Brown Palace will always have something many others don’t: history.