The Cangrejal Valley is one of the most beautiful places in Honduras, especially if you like waterfalls, river rafting, and other watery adventures. However, a dam project may threaten all of that. 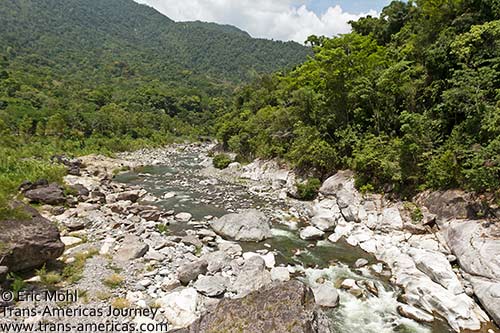 The Cangrejal River, target of hydroelectric dam builders in the Cangrejal Valley in Honduras.

We arrived in the Cangrejal Valley at a bad time. A company called Hydro Honduras had their eye on the Cangrejal River which is the heartbeat of this valley outside the grotty town of La Ceiba in Northern Honduras. For more than a decade businessmen had been sniffing around the valley with plans to dam the river in order to produce hydroelectric power. A fresh batch of greased palms had suddenly spurred the project into overdrive and concerned locals were circling the wagons.

We sat in on a meeting of hotel and tour company owners as they shared the latest information and consolidated their position against the dam which would alter the  Cangrejal River and would include diversion pipelines that would cut through adjacent jungle.

The tourism business owners (a mix of locals and long-time expats) worried that the dam would mean the end of rafting trips, a primary source of tourist income in the region. A dam would change the natural dynamics of the Pico Bonito National Park, through which the Cangrejal River currently flows. A dam would affect access to fresh water and fish for the people living in the scrappy little villages in the valley.

Up to this point the dam project in the Cangrejal Valley had progressed pretty much like dam projects everywhere: the dam’s proponents had all the political sway, cash, and organization while the dam’s opponents struggled to have their voices heard (mainly alleging that the Cangrejal dam project did not meet environmental sensitivity standards). The meeting we attended seemed like a turning point with valley residents putting their money where their mouths were, pooling funds to retain a lawyer to help level the playing field and keep them in the loop regarding developments in far away board rooms.

We hope a reasonable outcome can be reached, but it might be best to move the Cangrejal Valley up a bit higher on your travel to-do list if you want to enjoy all of its watery fun.

Your own private waterfall 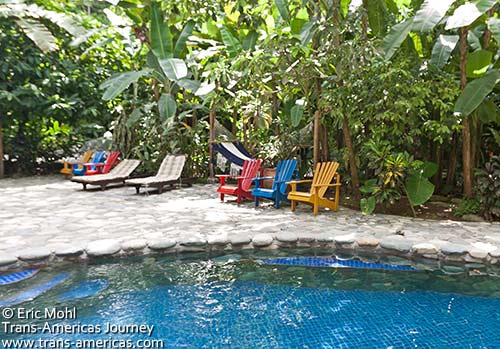 The pool at Las Cascadas Lodge in the Cangrejal Valley in Honduras is lovely, but it’s over-shadowed by the waterfalls on the property.

If you had a rich uncle with a vacation spread in the Cangrejal Valley it would probably be something like Las Cascadas Lodge. This elegant retreat near the head of the valley has a main house (originally built as a residence) with an open kitchen/dining/living area and two rooms. An adjacent thatch-roof bungalow with a screened patio, built-in tub, and outdoor shower was built later.

Karen enjoying a waterfall on the Las Cascadas Lodge property.

The place is aptly named. There’s a cascada (the Spanish word for waterfall) tumbling and rumbling just a few feet away from the main house. A 20 minute walk up a pleasant trail delivers you to another waterfall with the privacy and natural plunge pool that make it perfect for skinny dipping.

Built on the banks of the Cangrejal River, Casa Verde uses the valley’s tumbling water as a backdrop for their yoga and raw food retreats. Through a series of serendipitous, meant-to-be “accidents,” Wendy Green (a successful yoga instructor from New Jersey) purchased Casa Verde, then sold her home to the previous owner.

She now offers yoga classes (200L or about US$10) and full-on yoga/raw food/wellness retreats. Casa Verde has a supremely peaceful setting, a wonderful outdoor shower constructed like the inner spiral of a conch shell, loads of fruit trees, and the best composting toilet we’ve ever seen.

We took an early morning yoga class with Wendy and she managed to give even lapsed beginners like us a glimpse of the benefits she’s offering on the banks of the river. It didn’t hurt that our hour-long class was quietly observed by a toucan in a nearby tree.

Over the river and through the woods 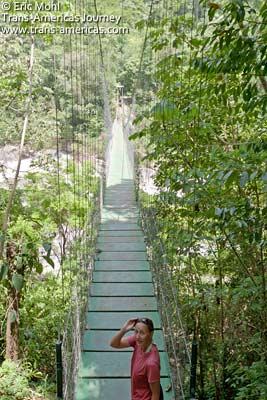 This swinging bridge above the Cangrejal River is the entrance to Pico Bonito National Park in Honduras.

To enter the second largest protected area in Honduras you have to walk across a 395 foot (120 meter) long swinging bridge suspended across a gorge above the roiling Rio Cangrejal. Before the bridge was built the only way into the park at this entrance was in a bucket pulled across on pulleys. 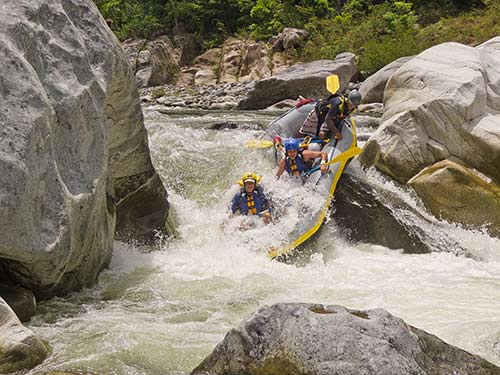 Rafting on the Cangrejal River in Honduras with Omega Tours.

Udo and Silvia’s river trips are still the most popular in the region. When we were there water levels were slightly low but guides kept the rafting trip adrenaline level high by incorporating canyoneering, bouldering and dramatic jumps into the river as well as traditional rafting. We also loved the fact that Udo and Silvia are working hard to train valley locals as river guides instead of just hiring guides from overseas. 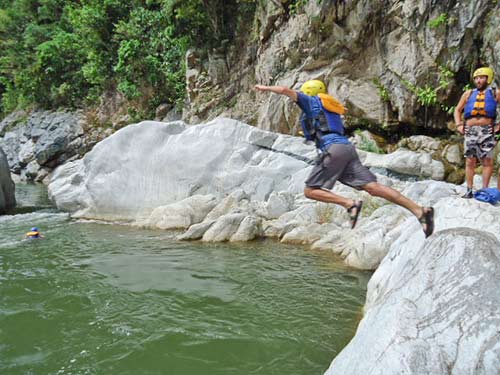 Bouldering and canyoneering up the adrenaline level of river rafting trips with Omega Tours in the Cangrejal Valley in Honduras. That’s Eric leaping into the Cangrejal River. 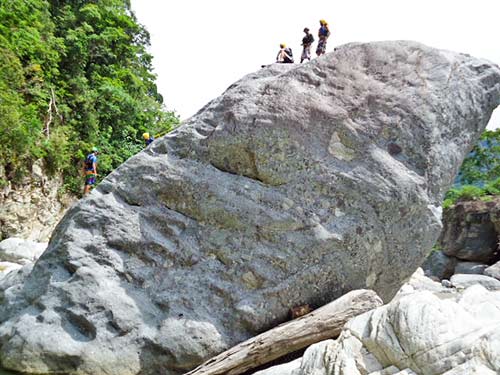 We climbed up this house-sized boulder then jumped off into the river as part of our rafting trip on the Cangrejal River with Omega Tours.

Over the years Omega has expanded to include a wide range of accommodations (from super-clean dorms to two fancy two-story bungalows), a delicious (if a bit pricey) restaurant, a lively bar, and a wonderful river-fed swimming pool (no chlorine!).

If rafting isn’t your thing, Silvia also keeps a small stable of horses and she loves to lead rides through the valley. 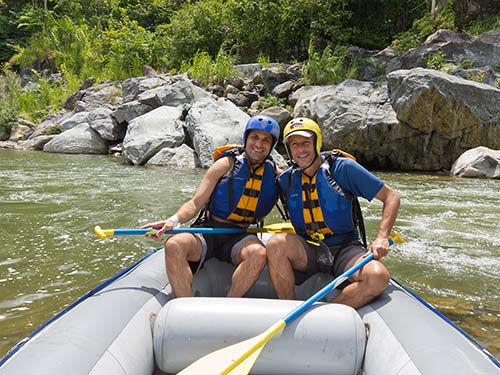 Eric and his brother Jeff, ready for the rapids.

Though the word cangrejal means crab in Spanish, we didn’t see any when we were in the valley. We did see a lot of toucans, however, including one sitting next to the dirt road which runs through the valley–by far the closest sighting we’ve had.

The nearby Lodge at Pico Bonito was undergoing a management shift and general overhaul when we were there but the place was still a bird-watching hot spot. We saw dozens of species and, yes, more toucans including a nesting pair which we were able to observe as they used that massive bills to clean out the mess made by a nest full of toucan chicks. 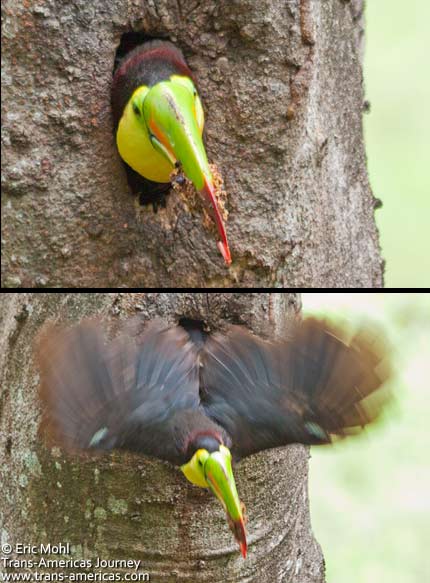 This toucan was busy cleaning house on the bird-filled grounds of the Lodge at Pico Bonito in Honduras. 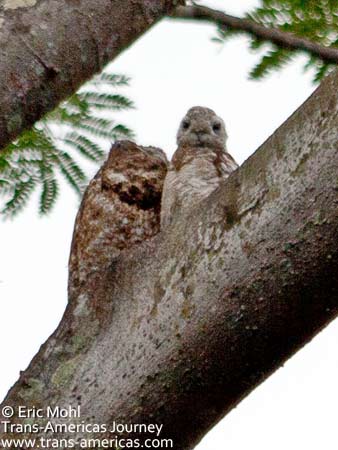 Yes, those two drab lumps are birds. Northern potoos, to be exact.