Swirling Swifts from the Center of the Earth – Aquisimon, Mexico

At 1,220 feet (370 meters) deep, the Cave of  Swallows (Sótano de las Golondrinas in Spanish) in San Luis Potosi state in Central Mexico is the largest cave shaft in the world, the second deepest pit in Mexico, and the 11th deepest in the world. It’s also home to tens of thousands of swifts. 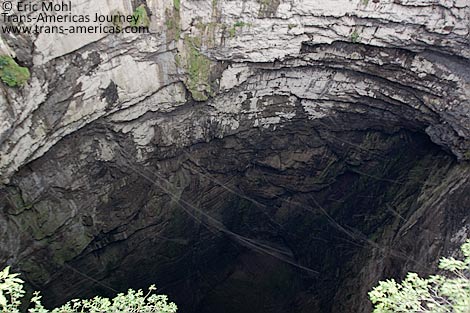 Those blurs are made by thousands of swifts which rise and fly every morning as they leave their night time roosts deep inside a 1,220 foot (370 meter) deep cave pit.

The Cave of Swallows

No one nows exactly how many white-collared swifts (not swallows, despite the cave’s name) live in the karst formation, but it’s a lot. And they all emerge from their deep, dark home every morning in a spectacle we were not about to miss, despite the fact that it required a 5:30 am journey in the dark up 13 miles of rough road.

From the tiny parking area we hiked about a quarter of a mile down a clear but slippery trail (wear boots) to the mouth of the cave where a viewing platform has been built. Locals with rappelling harnesses are on hand to strap you in if you care to lay on your stomach and peer over the very edge of the cave. More importantly, a local woman is also there with a thermos of good coffee for the blurry eyed visitors on hand for the birds’ 7:30 am exodus.

And what an exodus. 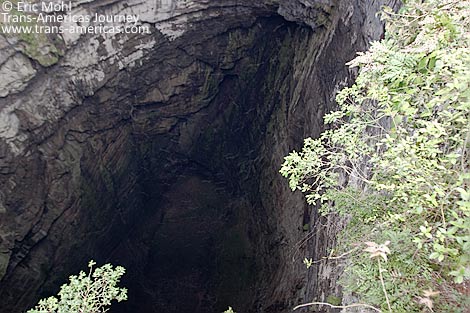 Thousands of swifts rise and fly every morning as they leave their nighttime roosts deep inside a 1,220 foot  (370 meter) cave pit.

First the birds begin to stir and then they begin to chatter which, in numbers this large, creates quite a racket. For the next 45 minutes the birds rise slowly to the top of the cave pit by circling faster and faster as if climbing a circular staircase. The combined wing action makes a noise that sounds like waves crashing to the shore.

Check out the spectacle in our video, below. 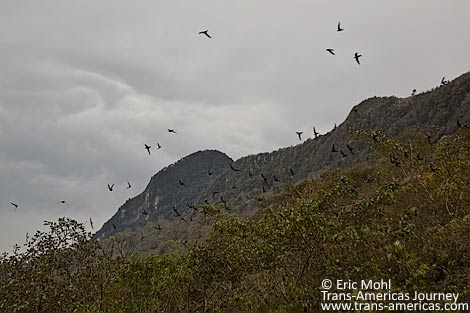 Free at last! A group of swifts bursts into the open sky from the depths of their cave home.

Once near the top of the pit the birds circle some more as if giving their eyes a chance to adjust to the daylight. Then, in spurts, 50 or 100 birds at a time, they shoot off in unison from the whirling mass and take flight into the open sky, shooting over the heads of the assembled audience (play the video, above, to watch this spectacle for yourself).

Every once in a while a cumbersome green parrot gets mixed up among the swifts like a barge chugging along behind a bunch of sleek yachts.

Around sunset the birds return home and the process is repeated in reverse. If you want to see the evening show as well as the morning performance, or if you just want to spend more time in the beautiful area around the pit cave, ask for Cristina Hernandez in the nearby village of La Union de Guadalupe (just drop into town or call 823-107-45 42 or 482 100 03 38). She has rooms for rent and can arrange camping and meals too.

Apart from the birds and a few awed travelers, the cave is also used by base jumpers who leap from the lip of the cave and free fall before opening their shoots. The two videos, below, were made by Aerial Extreme and they show some crazy base jumpers as they leap into the Sótano de las Golondrinas. It will get your heart racing and give you an idea of just how deep this thing really is…