Cuenca, Ecuador is an expat mecca which means you’re going to hear more English (and French and German) and see more North American and European faces here than anywhere else in Ecuador except maybe the Galapagos Islands. But Cuenca is also full of history, culture, hotels, and good food (you can thank the expats for that last one), as you’ll see in this travel guide to Santa Ana de los Cuatro Ríos de Cuenca. 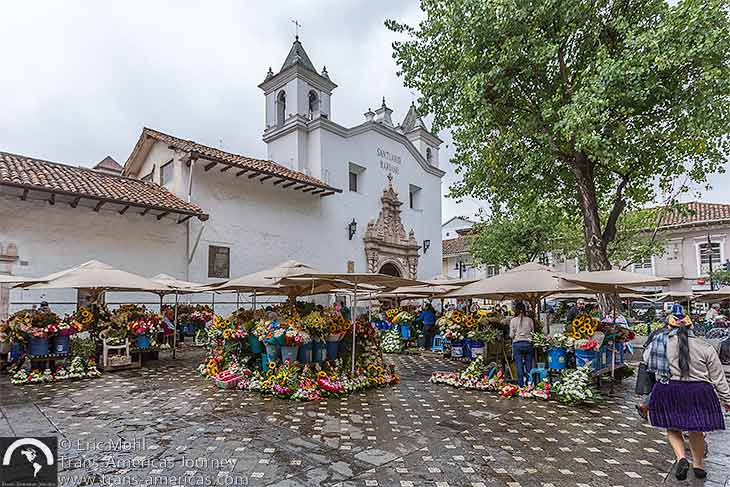 Cuenca was first inhabited by nomadic cave men and more securely established in 500 AD. The place has been important to the Cañari people, the Incas, Spanish conquistadors, and now people from all over the world including the proud Cholas Cuencanas who swish around the city in their layered skirts, bright colors, and braids. 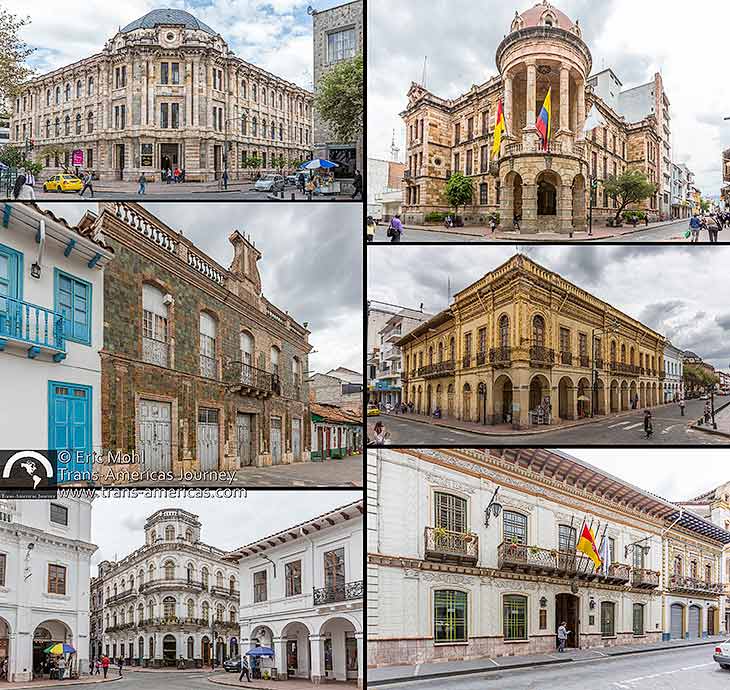 Architecture in the historic center of Cuenca, Ecuador.

Situated at 8,200 feet (2,500 meters), the Tomebamba River runs through the city whose historic center has been a UNESCO World Heritage site since 1999 on the merits of the colonial architecture there. When you’re done exploring the city, Cuenca makes a good base for visits to the Ingapirca archaeological site and Cajas National Park. 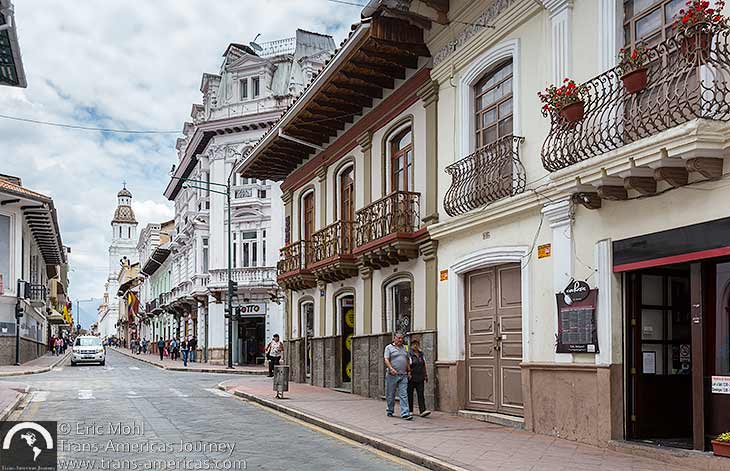 What to do in Cuenca 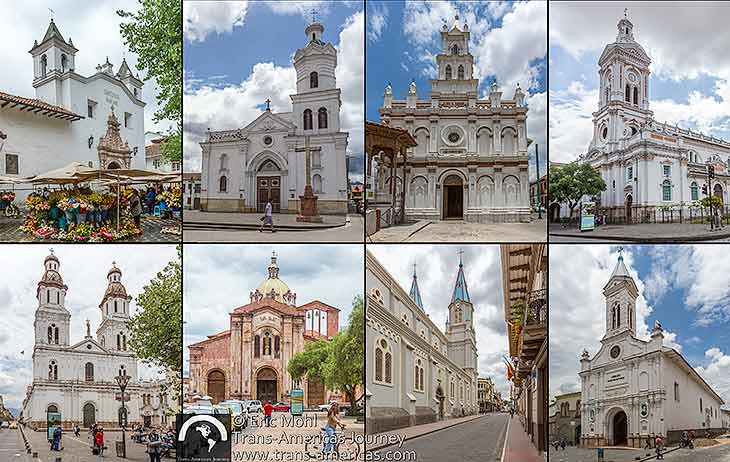 Just a few of the 52 churches in Cuenca, Ecuador.

There are 52 churches in Cuenca, so you could spend your whole visit just peeking into them. Instead, focus on the best of the churches and save some time for the architecture, art, and culture in Cuenca too. 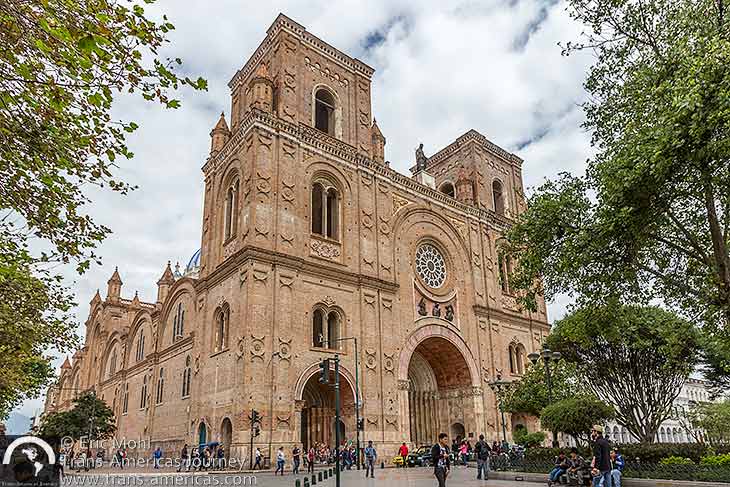 The Cathedral of the Immaculate Conception, aka the New Cathedral.

We took the guided tour (US$3, in English) of the Cathedral of the Immaculate Conception, commonly referred to as the New Cathedral, which includes the crypt and a hike up to the terrace on top for views of the city. 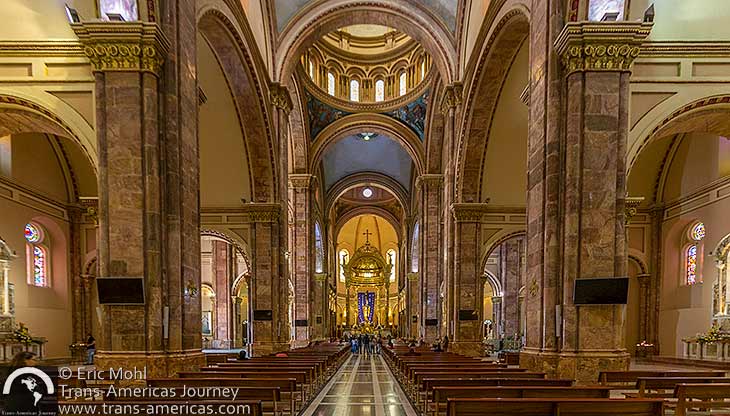 Inside the Cathedral of the Immaculate Conception.

The Museo de Arte Moderno (better known as MMAM) is located in a peaceful renovated house which was originally built in the 17th century. It’s any small rooms and outdoor courtyards now provide the right setting for a changing selection of modern art (free, donation requested). 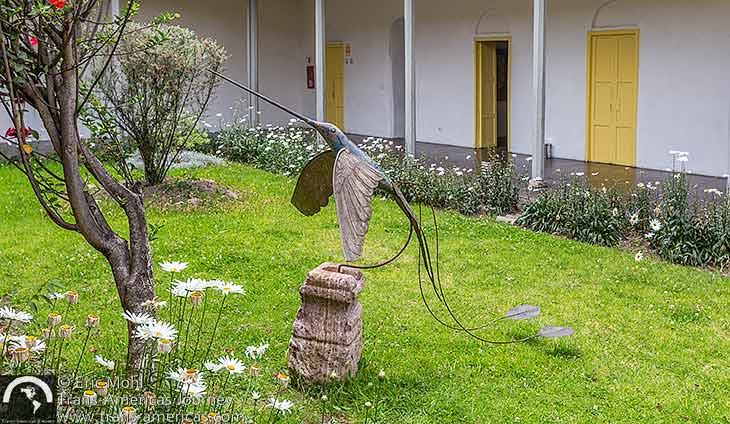 A playful sculpture at the Museo de Arte Moderno (MMAM).

Cuenca shows its Incan roots at the Pumapungo archaeological site (free) which preserves some of what remains of the city of Pumapungo (“the door of the puma”) which the Incas established after narrowly defeating the Cañari people. Researchers believe Pumapungo was second only to the Incan capital of Cuzco, Peru. Located in the historic center of the city on a hillock over the Tomebamba River, this site is primarily a collection of stone walls and foundations and a re-constructed building. 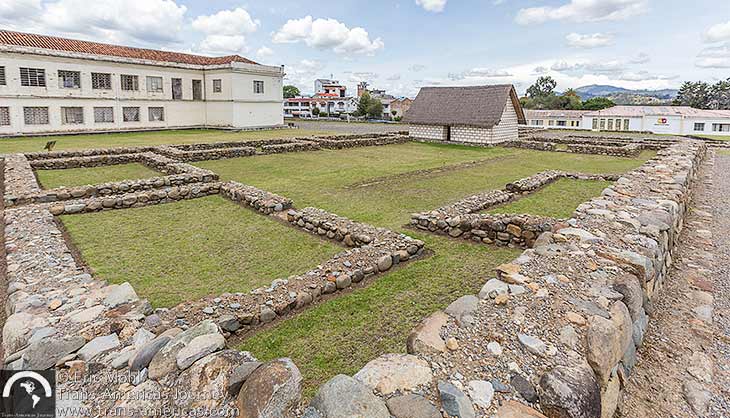 The Pumapungo archaeological site is an Incan construction that’s right in the middle of modern Cuenca.

The nearby Pumapungo Museum (free) is the city’s biggest museum and it delivers a colorful, comprehensive deep dive into the different cultures and ethnic groups in Ecuador including clothing, customs, money, pottery, textiles, and more. The museum also has some shrunken heads from the Shuar people. Most display explanations are in Spanish. 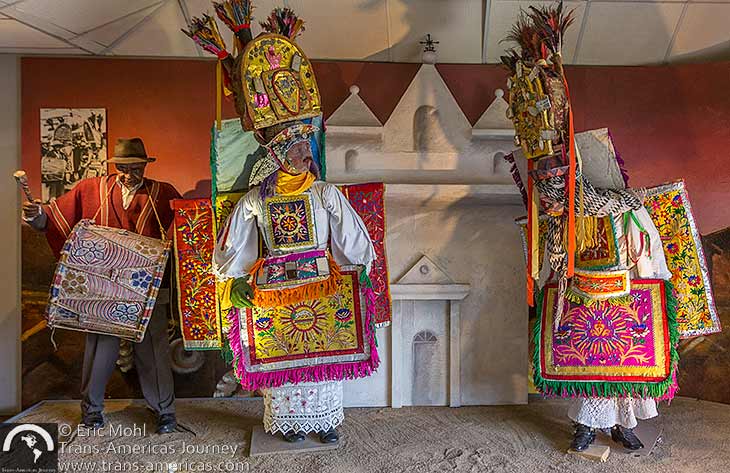 A display in the Pumapungo Museum.

So-called Panama hats actually come from Ecuador (they got their misleading name with US President Theodore Roosevelt was given one to shield him from the sun while touring the Panama Canal). Hat making is a revered art in the country and Cuenca is home to a number of master hat makers. The most famous is Homero Ortega. We also found good quality hats (at cheaper prices) at La Paja Toquilla. 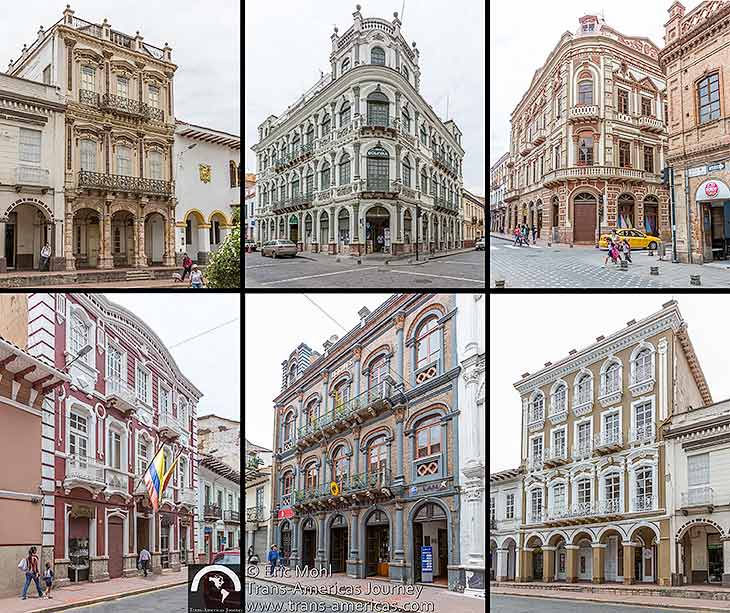 More architecture in the historic center of Cuenca.

Many walking tours of the city are offered as well and some of them are free (but tip if you can). This can be a good way to quickly get a taste of the architecture and history of Cuenca.

On a hillside on the outskirts of the city is the Amaru Bioparque Cuenca Zoologico  ($4) where some animal enclosures at the self-funded zoo appear to be made from chicken wire and ingenuity. This worked well to craft a kind of monkey habi-trail that allowed the monkeys to roam further without getting out, but it did seem like the puma could probably escape if she really wanted to. 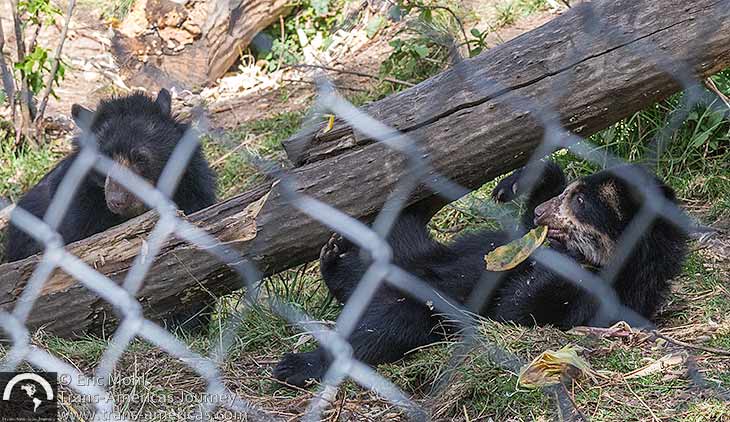 Andean bears at the Amaru zoo in Cuenca.

We also saw Andean bears (the zoo was also home to the first Andean bear cubs born in captivity in Ecuador), lions, condors, and a wide range of reptiles in an exhibit completed in association with the young and passionate herpetologists and tour guides at Tropical Herping.

To tour the zoo you have to walk along a 1.5 mile (2 km) dirt trail that is steep and uneven in places, so wear walking shoes and clothes. Allow at least an hour and a half. 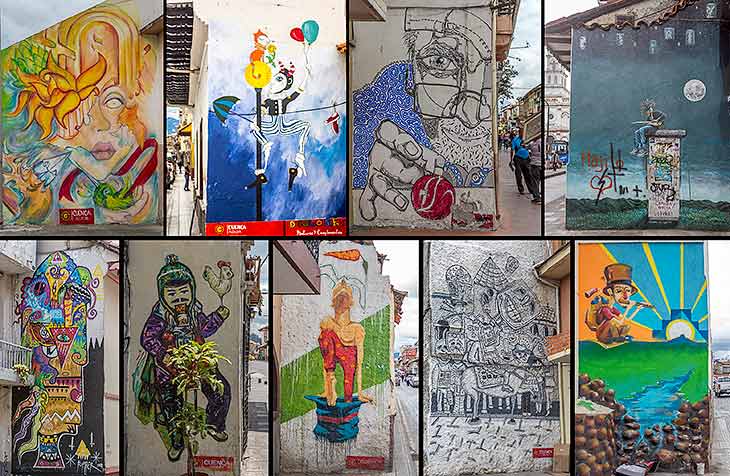 And if you’re into traditional textiles, hat weaving, jewelry making and other handicrafts, plan a day trip from Cuenca on the handicraft trail.

Another great thing to do in Cuenca is eat. Thanks, in part, to the large expat community the city has a lot of restaurants catering to a many different tastes. 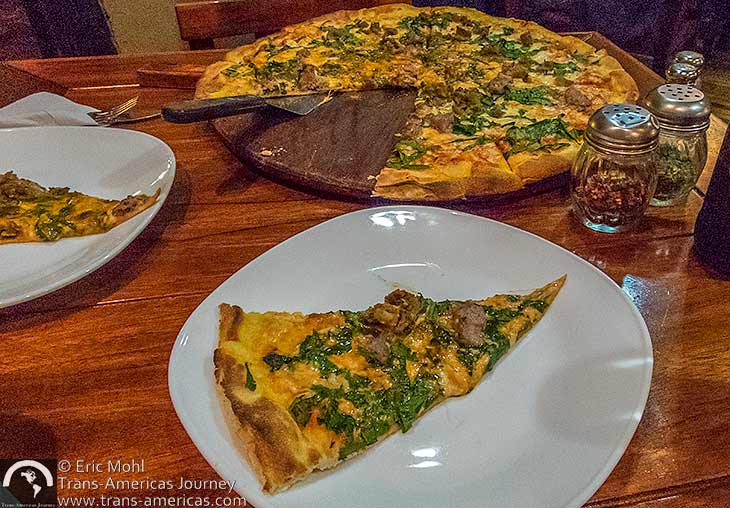 Fabiano’s Pizza serves legit pizza (see above) at great prices to a crowd that’s heavy on the expats (the place had a festive nursing home vibe). The most expensive 12 slice pizza was around US$17.00 and a generous glass of wine was US$3.50. Cash only. English is spoken (did we mention the expats?). 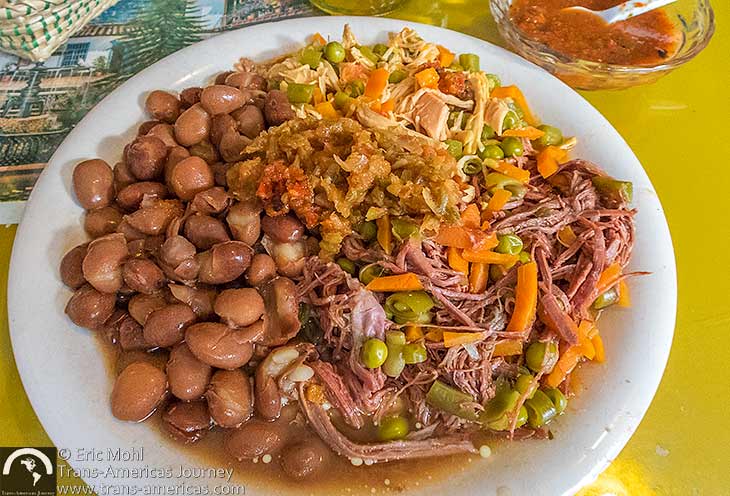 Amped up arepas at Moliendo Cafe.

Arepas are a humble thing, unless you get them at Moliendo Café where this simple cornmeal patty is topped with heaping portions of home cooked Colombian favorites including beans, hogao (a rich sauce of chopped and simmered vegetables), chorizo, chicharron (fried cubes of meaty pork skin), and much more. Portions (around US$3.50 per order) are huge. The Colombian owners also import Postobon soda and Aguila and Poker beer from Colombia. 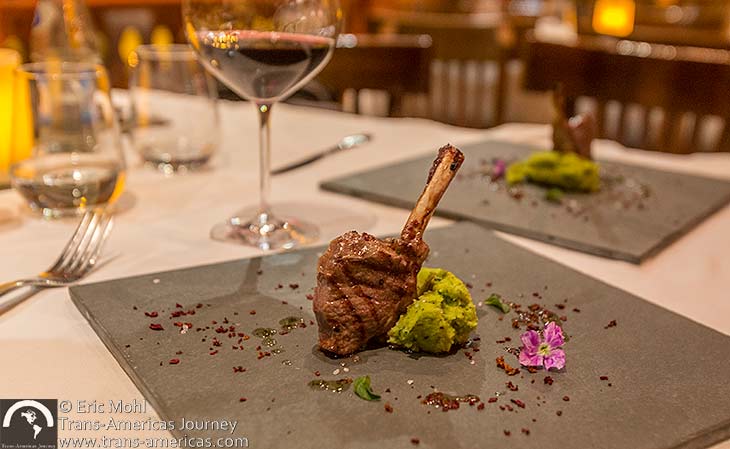 Part of the most impressive meal we had in Cuenca, at El Mercado restaurant.

One of the best meals we had in Cuenca was at El Mercado, overlooking the river where polished international cuisine (rack of lamb, grilled octopus, risotto) is served along with creative cocktails (don’t miss their version of a Moscow Mule made with fresh ginger, agave syrup, aguardiente and soda water) and an extensive (for Ecuador) wine list. The excellent bread is homemade, the tableware is chic, and the service is good. The owners also have their own organic farm outside the city and we hope they never take the luscious grilled salad off the menu.

Thirsty? The Far Out brewery makes German style craft beer which you can get at their brew pub in the historic center of Cuenca. 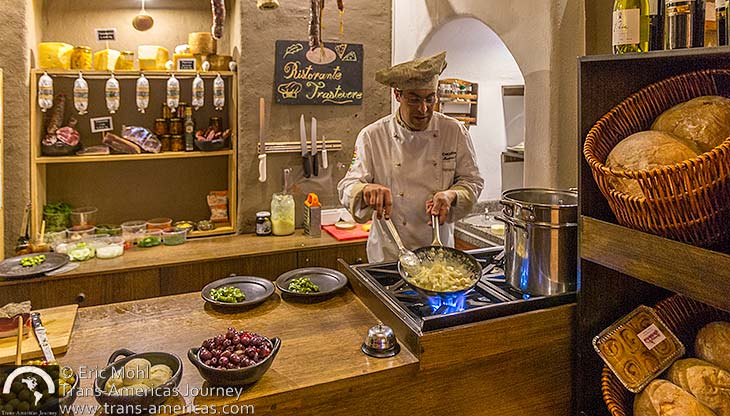 Chef Massimo is from Rome and his Ristorante Trastavere is super Italian.

Ristorante Trastavere, on the corner near the intersection of Honorata Vazquez and Presidente Borrara Streets, is the creation of Rome-born chef Massimo. He opened the place in 2015 and continues to make homemade pasta, gnocchi, bread, and sauces. He makes his own mozzarella, smokes his own fish, and cures his own meats too. The food, served on red and white checked tablecloths in a small dining room above his even smaller open kitchen, is extraordinary. He now has a pizza joint across the street so Fabiano’s has some competition. 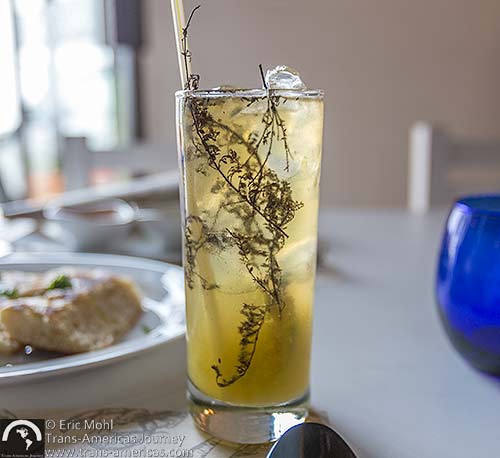 Just one of the inventive cocktails at La Chalupa.

La Chalupa Mediterranean restaurant was opened in 2015 by a young Basque chef. It’s a festive place, equally good for a meal or one of the cocktails created by bartender  Bernardo Arias. Order his Cajas Spirit cocktail which, he says, was inspired by nearby Cajas National Park. It’s made with rum or tequila that he infuses with herbs harvested from the park. Then tonic water, lime juice, and Angostura bitters are added (around US$5). It’s bracing and refreshing, just like a hike in its namesake park.

Cuenca is full of coffee shops and cafes. We had great brews at Goza Espresso Bar and at Café de Nucallacta where they only serve Ecuadorean coffee that they’ve roasted themselves. 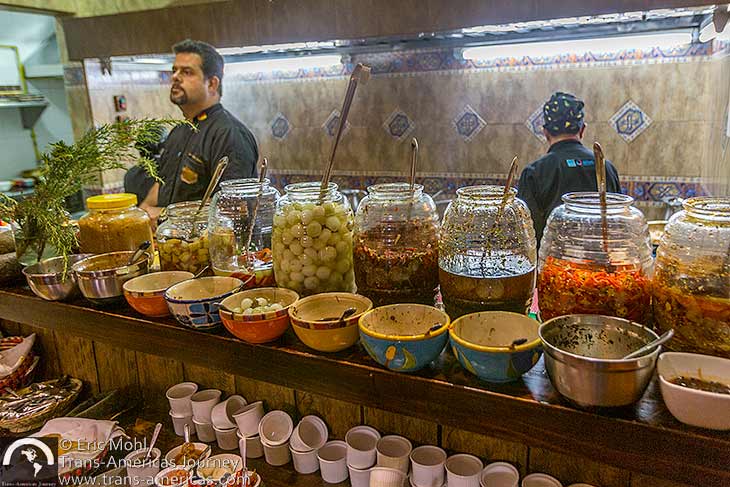 Sure you can order off the menu of Ecuadorean classics at Tiesto’s, but it’s much more fun to let Juan Carlos Solano, the self-taught chef and owner, tell you what you should eat. The well-trained waiters will make sure you understand the wide variety of house made condiments which are meant to be eaten in a specific order and in specific combinations. Solano is all about playing with flavors and whether he’s cooking prawns or pork he’s got a vision of the final dish and how it should be enjoyed. Buckle up and go along for the ride.

For a snack or light lunch head to the corner of Juan Jaramillo and Estrella Streets. Here you’ll find a cluster of small places selling sanduches de pernil (roasted pork leg sandwiches) for about US$2. Pick a place (they’re all good) and enjoy. 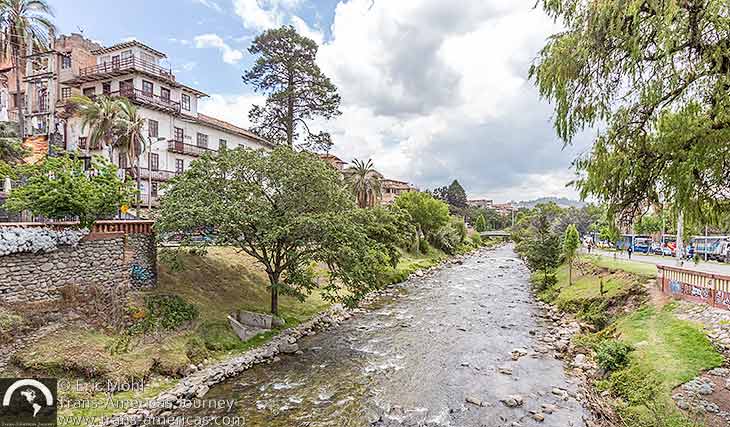 Part of what defines Cuenca is the Rio Tomebamba which runs through it.

Hotel Los Balcones is a long-standing favorite in Cuenca because it’s right in the center, moderately priced for a mid-range hotel in this city, and is a comfortable combination of history (the building was constructed as a private home in the 18th century) and modern amenities. Service is excellent, many rooms have small balconies (as the name would imply) and the sunny upstairs breakfast room is a great place to start your day.
Book Now 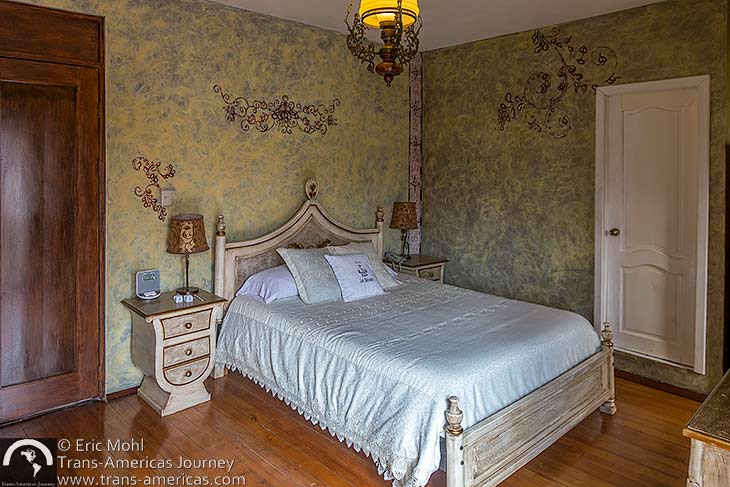 Our room at Hotel Los Balcones in Cuenca.

Hotel Santa Lucia, a bit musty and dusty around the edges, is located in the historic center in a building that was built in 1859. The place is full of antiques and history. Read our full review of Hotel Santa Lucia for Luxury Latin America.
Book Now 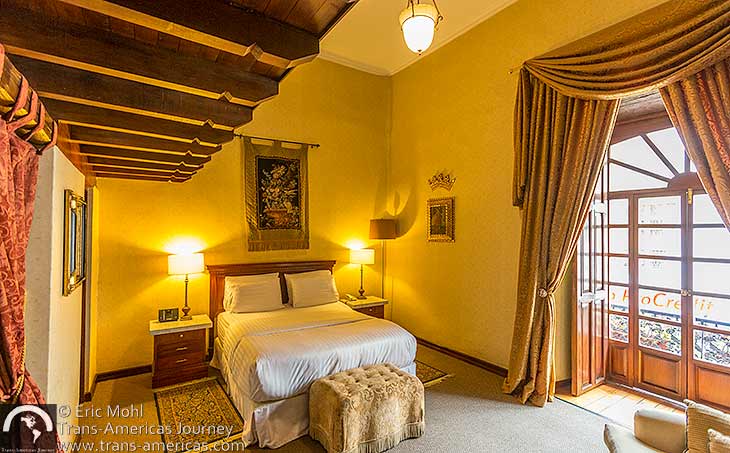 A room at Hotel Santa Lucia in Cuenca.

Hotel Victoria is owned by the Duran family, pioneers in tourism in Cuenca (they also own Posada Ingapirca near the Ingapirca archaeological site). The riverfront hotel is iconic in the city as is its El Jardin restaurant which is modern incarnation of a restaurant created in the 1970s.

Hotel Victoria is not a fancy place in the traditional sense of luxury, but it is flawlessly dignified. Rooms vary greatly and some (like ours) are small, but we had a great river view and lots of ambiance. A great full breakfast with made-to-order eggs is served daily in the El Jardin dining room with river views.
Book Now 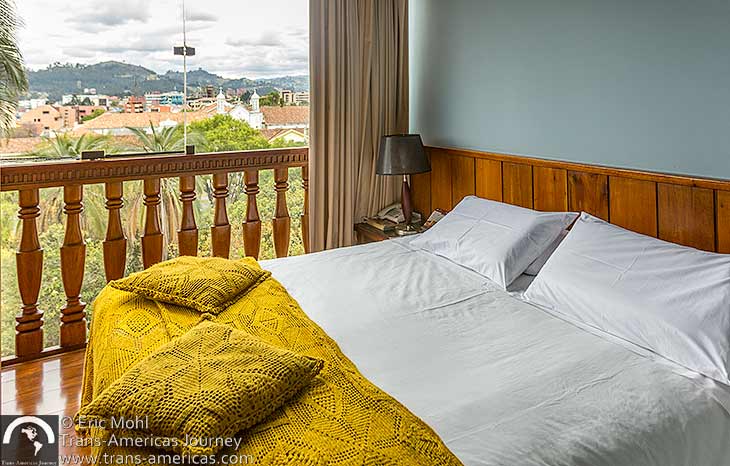 Our room at Hotel Victoria in Cuenca.

Hotel Zahir 360 is a real anomaly in Cuenca. In a city where almost every hotel exists in a historic building full of antiques, the Zahir is sleek and modern. It’s also not in the historic center but on the other side of the river. Read our full review of Hotel Zahir 360 for Luxury Latin America.
Book Now 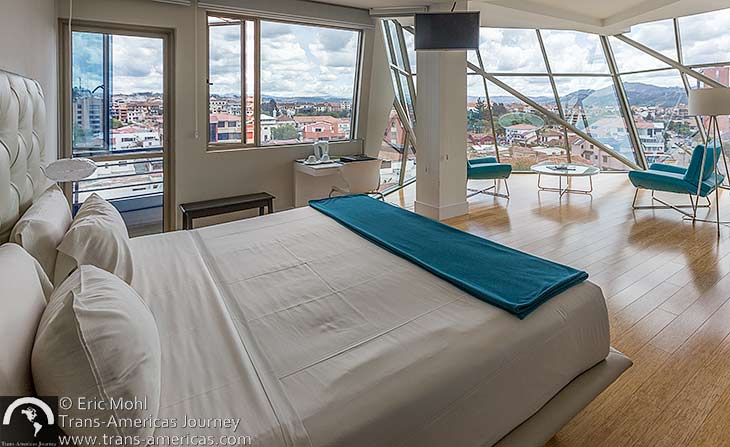 The Zahir 360 breaks from the hotel crowd in Cuenca with a very modern design.

We walked past the Siena Hotel on our last day in Cuenca. We did not stay at this central hotel, but we did quickly tour some rooms and it was stylish and comfortable and nailed a boutique hotel vibe better than any other hotel we saw in the city.
Book Now