We spent more than three months in and around Guadalajara, Mexico including five weeks at Spanish school and lots of time traveling around the city. As we prepare to finally move on, we wanted to share 9 heartfelt and (we hope) helpful reasons to love Mexico’s second largest city. 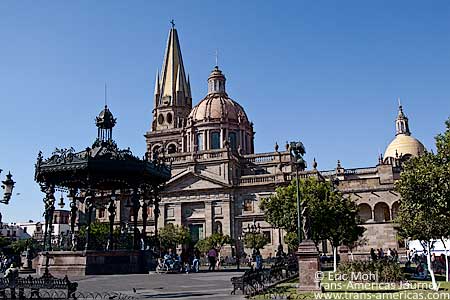 The Zócalo is anchored by the Guadalajara Cathedral or Catedral de la Asunción de María Santísima.

Best fish tacos: Taco Fish on La Paz Yeah, 16 pesos (about US$0.85) is a lot to pay for a taco in Mexico, but this street spot slings expertly fried fish and shrimp tacos with all the fixin’s. The crowd speaks for itself. Warning: unless you’re an NFL quarterback do not order more than two. They’re huge as well as delicious.

Best old-guy bar: Molacho There’s no sign. Go to the corner of Alcalde and Juan Manuel right in downtown and take the stairs off Juan Manuel up to the bar which is on the second floor above the Farmacias Guadalajara on the corner. What you’ll get is old guys galore (including one playing a baby grand piano, if you’re lucky) plus botanas (free bar snacks) galore, including tacos and tostadas and even soup. People rave about a place called Cantina La Fuente, but we found it to be too big and not very welcoming. Plus, they don’t have a baby grand piano or botanas. 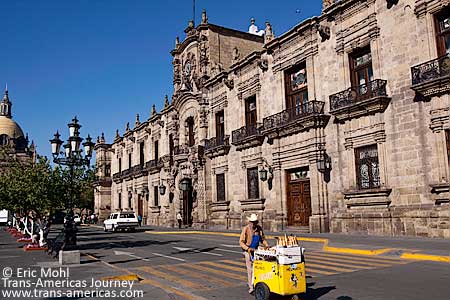 Palacio de Gobierno in Guadalajara, one of the few historic buildings left standing in the city.

Most disturbing corporate mascot: The Farmacias Similares guy Farmacias Similares is a national chain of pharmacies and you see them all over Mexico. However, there seemed to be even more of them than usual in Guadalajara and most have some poor guy prancing around out front all dressed up like the chain’s perpetually smiling fake pharmacist mascot. There’s just something about this guy that makes us want to whack him in the head… 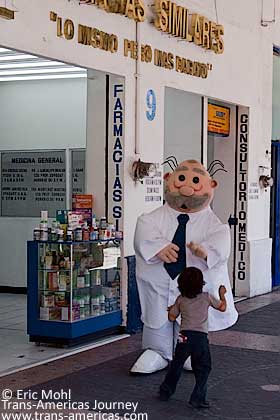 This kid likes the ubiquitous Farmacias Similares mascot way more than we do.

Best market and best market vendor: Mercado Corona In Guadalajara the impressively massive Mercado Libertad gets all the attention and it must be visited. But our favorite go-to market (as in we went there every single day for lunch and sometimes later for dinner too) was the comparatively tiny Mercado Corona. It’s got great food vendors (from tacos to seafood to carnitas) and the second floor is full of stalls selling potions and lotions and sprays meant to fix anything that might possibly be wrong with your life. Want more success at work? Pick up a can of Call Client, whose label proclaims that it contains “Genuine Spray.” Got problems with gossipy friends or a chatty-Cathy spouse? Both are easily handled by a product called “Shut Your Mouth.” Even better than that is our favorite market vendor, the perpetually happy man who runs a small health-food/juice bar stand on the market’s first floor. Not only did he make the best aguas frescas (water infused with fresh fruit) we’ve had in Mexico, he always spent time to help us with our Spanish too. tip: mix strawberry (fresa) with lime (limon). 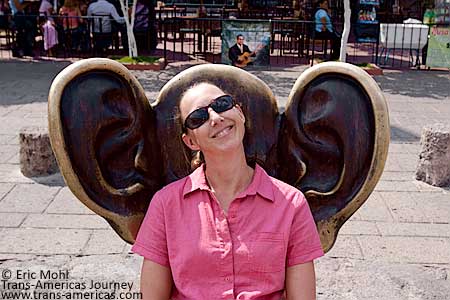 Karen is all ears sitting on one of the whimsical sculptures by Alejandro Colunga in Plaza Tapatía in front of the mural-filled Hospicio Cabañas.

Smartest urban quirk: the walking/running man Guadalajara is Mexico’s second largest city (after the vastly more-huge Mexico City) and it runs remarkably smoothly thanks to a whole host of tools and rules that keep even the sometimes congested downtown under control. One such tool is liberal installation of fabulous crosswalk lights that now only countdown the number of seconds that you have left to cross the street but also displays a moving human who speeds up as the seconds tick away. Mexico City could learn a lesson here.

Check out our video from Guadalajara, below.

Best totally different places to see live music: Casa  Bariachi and On the Rocks Guadalajarans (aka Tapatios) love their live music, from traditional mariachi music (which Tapatios will claim was invented in Guadalajara) to modern rock. Our favorite place to see massive mariachi bands with a rotating cast of sit-in stars is Casa Bariachi, an enormous festive place that is almost always packed with tables full of Mexican families or Mexican women on a raucous (tequila-fueled) ladies’ night out. It’s unbeatable. For live rock we stumbled upon a place called On the Rocks which is run by a gregarious guy named Isaac who makes sure the waitresses are smiley and speedy and the bands (which usually play covers of US and European rock songs in English and in Spanish) are of high quality. His own band performs on Wednesday nights.

Most confusing moment: trying to figure out when/where the soccer) games were Guadalajarans, like most Mexicans, are crazy for soccer. Here the two top teams are the Chivas and the Liones Negros. We were understandably anxious to see one or both teams play, but our initial research on their official team websites and the local sports pages left us totally confused about where and when the teams were playing. We even asked friends with much better Spanish than ours to do the same. None of us could figure it out. When we finally did get the hang of knowing which team was the home team and, therefore, where the  game was taking place we’d already missed a bunch of matches and we never did get to a game. 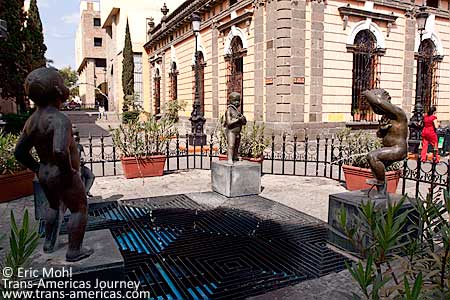 This fountain in Guadalajara, Mexico is full of bronze boys peeing.

Greatest family ever: the Delgadillo/Sanchez/Hellyer clan The generosity, help, support and overall wonderfulness of every single member of this family not only made our time in Guadalajara immeasurably easier and more enjoyable but also added to our understanding of one of the greatest things about Mexico in general: the generosity and pride of the people. We literally can’t thank them enough for feeding us and letting us stay with them and putting up with our rickety Spanish and making us feel like we were part of the family. We look forward to continuing the friendships we started in the Guadalajara area long after we’ve moved on.