July has been National Ice Cream Month ever since Ronald Reagan made it so during his presidency in 1984. He also decreed that the third Sunday in July is National Ice Cream Day. Anyway, to celebrate we thought we’d share some scoop scoops discovered during our 18 months of travel in Mexico. We’re not even dessert people but here in Mexico they definitely scream for ice cream. Here are five of our favorite. 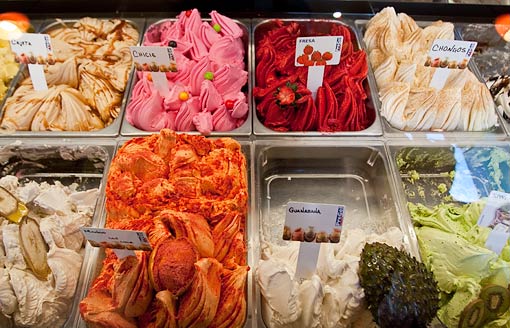 1. Hidalgo del Parral in Northern Mexico has many claims to fame. This is were Pancho Villa was gunned down, for example. The city was also instrumental in the country’s silver, gold, zinc and copper mining heyday. It’s also got one hell of an ice cream parlor. Right downtown off the Plaza de Armas you will find Helados Torres. Big, shiny, bright and featuring a display of homemade, all-natural gelato-esque delights like you’ve never seen, each vibrantly colored container topped with a pleasing display of the ingredients inside. Their ice cream (helado in Spanish) is as delicious to look at as it is to eat.

2. Every region of Mexico is known for some sort of signature food. The state of Michoacan is the undisputed ice-cream state. You’ll find ice cream shops throughout the country claiming to make Michoacan-style ice cream. But to get the real stuff, you’ve got to go to Michoacan—preferably Patzcuaro. Every day in this Pueblo Magico (Magic Town) women set up ice cream stands under the arches that ring the lovely main plaza. Peruse the wares, but rest assured that every one of the dozens of flavors (corn, blackberry, chocolate, coffee, durian, guava, cheese) are homemade and totally natural. Full of real local fruit, real sugar (not corn syrup) and rich cream, these treats (mere pennies per scoop) are rich and gooey.  And addictive.

3. The Dulceria y Sorbeteria Colon, on the Champs-Elysees-inspired Paseo Montejo in Merida in Yucatan State, is an institution where you’re likely to find families and first-daters enjoying massive portions of homemade creations that straddle the line between ice cream and sorbet—creamy and deeply flavored without the heaviness of cream or the iciness of sorbet. The mango is so true-to-life in both color and flavor that it seems like you’re eating the miraculously whipped and frozen fruit itself. 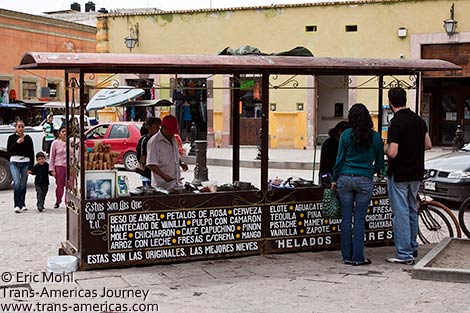 Just one of the ice cream vendors selling an extremely unusual selection of flavors around the main plaza in Dolores Hidalgo, Mexico.

4. Most people who bother to stop in the town of Dolores Hidalgo come to see the site where priest Miguel Hidalgo delivered his famous grito on September 16, 1810 which helped ignite the Mexican Independence movement. This is an awesome reason to come and a compelling piece of Mexican history—particularly given the fact that 2010 is the 20th anniversary of the speech and Mexico’s Independence movement. But there’s one more unique offering in the town of Dolores de Hidalgo that shouldn’t be missed. The half dozen or so mobile carts in the town’s main plaza may look like regular ice cream vendors, but read the list of flavors–pig skin, corn, beer, shrimp, tequila, rose, mole–and you see why they’re unique. Once you’ve decided on an exotic flavor, your ice cream comes in an awesome freshly-made cone. A word of warning however: these vendors are dangerously generous and it’s easy to fill up just on the samples they offer of each flavor as you’re trying to make up your mind. We ended up with more than a dozen tasting spoons in our hands before we decided to try the mole ice cream (rich, salty, chocolaty and sweet with just a touch of spice).

5. Not all of our favorite Mexican ice cream is found on the street. At Hacienda Xcanantun, outside Merida in Yucatan State, the gourmet fare is as much of a draw as the luxuriously restored hacienda hotel.  You will enjoy your entire meal here but order their rich and subtly sweet roasted tomato tart for dessert and you’ll also get two scoops of deliciously confusing (sweet/fresh/green) homemade basil ice cream made with basil from an organic garden in the neighboring village. We recently heard restaurant critic Gael Greene says she “doesn’t like lawn clippings in her dessert” in reference to basil ice cream. Then again she color-coordinates her shirts to match her frumpilly antique hats.