Hotel Review: The Inn at Langley on Whidbey Island in Washington 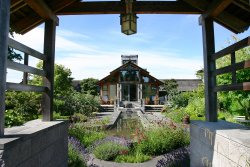 What’s the first thing you should unpack when you arrive at The Inn at Langley? Your binoculars. Every single one of this inn’s 26 rooms, suites and cottages has a world class view across the Saratoga Passage and while whale sightings are not exactly ho-hum, you wouldn’t call them a rarity either. The day I checked in, the woman at the front desk was still visibly excited about spotting a large pod of orcas earlier in the morning.

I became visibly excited when I laid eyes on my cottage duplex with a roomy patio, two fireplaces, dimmer switches throughout (lovely touch) and walls of window facing straight out over the sound which was so close I could hear it lapping onto the shore. At certain times of the year lucky guests can also hear migrating pods of grey whales breathing down below you.

But I didn’t have much time to linger in my cottage since the $80, thrice-weekly, six course, set-menu meal in The Chef’s Dining Room begins at 6 pm sharp on Sundays (7 pm on Friday and Saturday and at 7 pm on Thursdays from mid-June through August). Given the reputation of chef Matt Costello—formerly chef at Tom Douglas’ award-winning Dahlia Lounge and Palace Kitchen in nearby Seattle and whose work at the inn was deemed “Extraordinary” by Zagat in 2006—I didn’t want to miss a bite of it.

The dining room feels homey and stylish with a massive double-hearth fireplace, wrought iron light fixtures and more than a whiff of Frank Lloyd Wright. Personalized menus with diners’ names on the top are a charming touch, though the wicker-frame chairs present a real snag-danger to clothes. Not so the beautifully crafted dining tables, made by local woodworker David Gray who spent an average of 25 hours on each piece.

Costello, who is also the General Manager of The Inn at Langley, is relaxed and enthusiastic as he talks to the assembled diners about his passion for fresh, local, seasonal food. Then he gets down to business. Ingredients have been prepped and Matt works alone in his well-appointed but not snooty (and obviously well-used) kitchen preparing every plate of every course himself.

Though Costello humbly calls his meals “Northwest Supper,” don’t be fooled. Using his considerable experience and skill he coaxes the very best flavors out of each ingredient. The result is simply elegant food prepared and presented with confidence. My husband, Eric, was not only inspired to try two dishes starring his sworn culinary enemies—mushrooms and stinky cheese—but he actually enjoyed both.

Apart from “leave no morsel behind,” here’s another Northwest Supper tip: opt for the wine pairing with your meal. At $60 per person, it’s worth it just to be proven wrong about the appropriateness of pouring a warm, buttery, sweet Erhart Gewurztraminer with tuna presented on a slice of pickled melon and sprinkled with sharp lemon basil. They really don’t just hand out Washington Wine Grand Awards (which Costello’s cellar won in 2006) to just anyone. In fact, only 16 other restaurants in the state were equally honored last year.

In 2006 Travel & Leisure also named The Inn at Langley to its list of 500 Top Hotels in the World and called it one of its Top Five American Winter Retreats. That same year Conde Nast Traveler put the inn on its Gold List where it rated higher than any other property in Washington state.

Farmers markets, art galleries and antique stores outnumber all other types of retail relaxation in the charming blocks that make up “downtown” Langley (all within walking distance from the inn), but don’t miss The Star Store and The Star Store Bistro Café and Bar—think classic mercantile meets Anthropologie meets a big city gourmet market.

Another worthy way to while away an afternoon is Spa Essencia, located next to the inn on the beach level. The spa puts an emphasis on all-natural products, has a refreshing lack of regard for the clock (no assembly line approach to client “service” here) and offers large and airy treatment rooms, many with a view of the water so you won’t miss that orca pod should it decide to pass through in the middle of your European Facial or Hot Stone Massage. I tried the Seaweed Body Wrap ($90 for 60 minutes) and was thrilled when the seaweed was applied through massage, not just brushed onto the skin, making this a truly comprehensive body treatment. 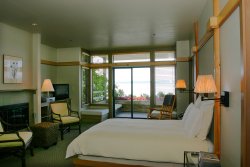 My bathroom at The Inn at Langley was three quarters of the way to spa-ville and came fully loaded with radiant floor heating, playfully elegant Mario Russo bath amenities (love the soap that comes out of the box looking like a stone someone pocketed from a Zen temple) and a jet soaker tub for two with a view of the sound. Double sinks, tiny, iridescent mosaic tiles on the floor and walls and a huge shower head completed the chicly relaxing scene.

This year all rooms at The Inn at Langley will sport newly renovated balconies decorated with invitingly padded wood chaise lounges and foot stools and accented with river rocks—plus that view, of course. All rooms are also slated to get flat screen TVs, which will be a welcome upgrade since the two units in my cottage were clumsy low-tech varieties plunked down on carts that could not be moved for easier viewing. Rumor has it that the dorm-roomesque metal blinds throughout the inn may also be replaced with classier wooden versions.

But even if the metal blinds stay where they are, The Inn at Langley is one of the best places to kick back and relax in the name of whale watching. You’ll have the blinds open all the time anyway.