The Mexican state of Jalisco claims to be the birthplace of a few pretty important cornerstones of Mexican culture including mariachi music and tequila. A lesser known contribution which can be traced back to Jalisco is the charro or Mexican cowboy. There’s no better way to explore Mexico’s cowboy culture than on horseback in Lagos de Moreno. 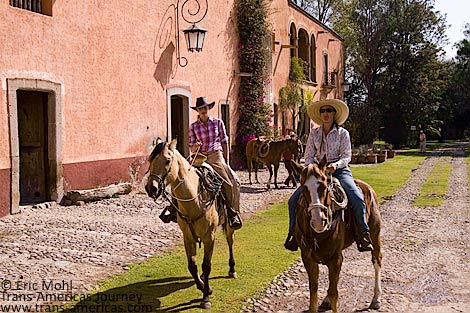 Charros and charreadas (Mexican cowboys and Mexican rodeos) pre-date cowboys and rodeos in the US. The unique riding skills and equipment here in Mexico evolved in the 1500s after necessary amendments were made to the riding styles imported when the Spanish invaded (some of their techniques and gear proved a little too prissy for the cattle and the terrain the average charro faces).

Mexican riding techniques and the western riding techniques that we’re taught in the US are similar in a lot of ways. However, there are differences. They’re subtle but they’re important as we quickly learned (sometimes the hard way) when we spent a few days horseback riding around Lagos de Moreno with Pancho and Lena from the heavenly Hacienda El Ahito. 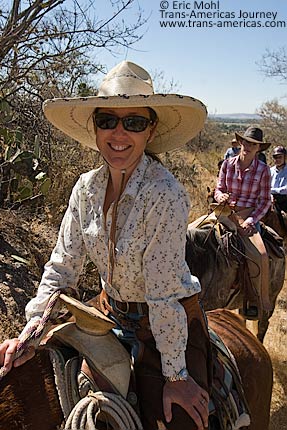 Karen, always happiest on a horse.

For example, the horn on the saddle is the size of a dessert plate to enable a particular style of roping. And riding is really all in the legs. Reining in Mexico is an exquisitely delicate affair. Some riders hold the specially-knotted and weighted reins simply by hooking one finger through them, usually the pinky. This was the biggest shift for us since we’re used to horses trained to neck rein fairly heavily. 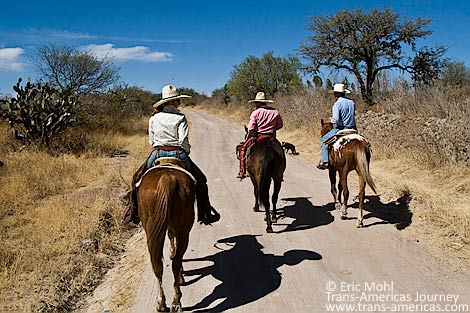 The Camino Real snakes through the Lagos de Moreno area (and much of Mexico). Sections of this historic road are still used as horseback riding trails.

The terrain and trails we rode on were just as old and different as the reining. Cactus, stone walls, small fields, more cactus, some mesquite, a creek, then more desert. Sometimes we were actually riding on sections of the original Camino Real de Tierra Adentro, a UNESCO World Heritage Site, which was unexpectedly thrilling. 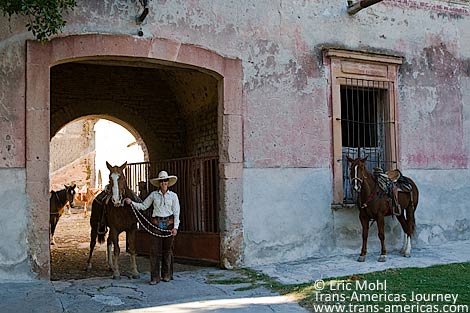 Our destinations were steeped in history too. Each day we set off from either El Ahito, or Hacienda Sepulveda bound for a different hacienda where we met the occupants and enjoyed a long delicious home-cooked lunch and a tour of the generations-old houses. Some were elegant. Some were fortress like. Some had elaborate private chapels. Some were only half-inhabitable. Some contained a museum’s worth of history. All of them were fascinating. 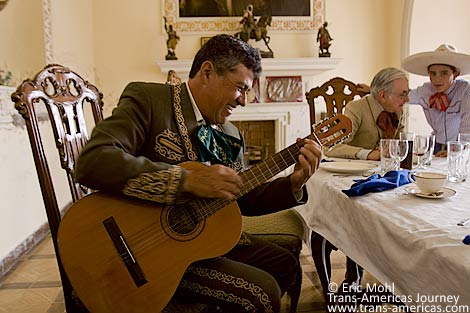 The food and the entertainment were both excellent during lunch in the extremely European dining room at Hacienda La Labor.

Once we were even met on the trail by the hacienda owner on horseback bearing a bottle of tequila and glasses so we could all sip as we rode the final distance to the hacienda. To call it civilized is an understatement. 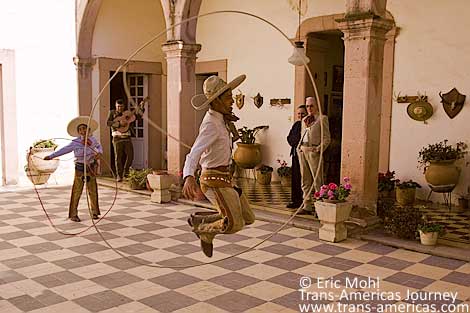 After lunch, intricate traditional rope work was expertly demonstrated by the grandsons of Don Jesus (in the background), Mexican cattleman extraordinaire and owner of Hacienda La Labor.

Most days we were in the saddle for about six hours. However, one very long day (with a particularly languid lunch) turned into eight hours and we ended up riding back to Hacienda Sepulveda  in the dark.  If you thought the heavy elk-skin chaps (made by Lena Kissling) and stiff wide-brimmed hats were were wearing were just for show, you’re wrong. 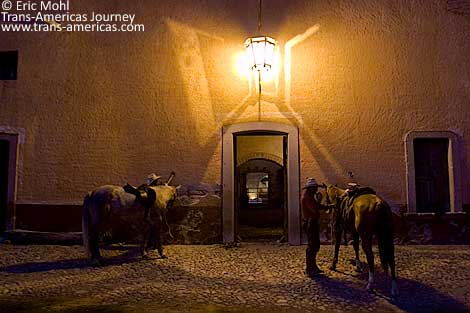 Arriving back to Hacienda Sepulveda in the dark after a long and lovely day in the saddle in Lagos de Moreno.

The chaps and hats were the only things between us and an invisible world of eye-gouging, skin-tearing thorns as we rode in the dark through a tightly-packed forest of cactus the size of trees. If this doesn’t teach you to trust your horse (and vice versa) we’re not sure what will. 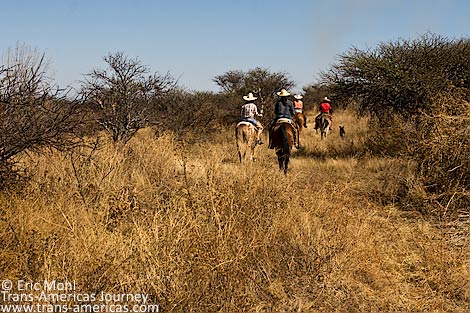 Riding through the signature scrub and cactus that cover the hills and mesas around Lagos de Moreno.

Now’s a good time to mention one additional important difference between the way we’re used to riding in the US and the way people ride in Mexico: spurs. Every rider wears them. We’ve never seen anyone in Mexico kick their horse but we have seen a lot of gentle spurring to get big results. 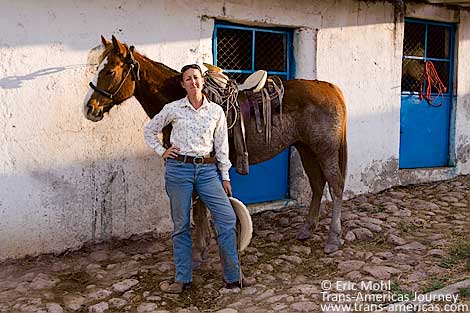 Karen looking a bit perturbed after her horse tried to roll her in a muddy watering hole.

A pair of spurs might have helped Karen urge her horse out of a drinking hole before good old Cheese Face (forever more known as Shit Face) decided to lay down in the water with her still in the saddle, furiously trying to send a meaningful message to the horse with her spur-less boots. 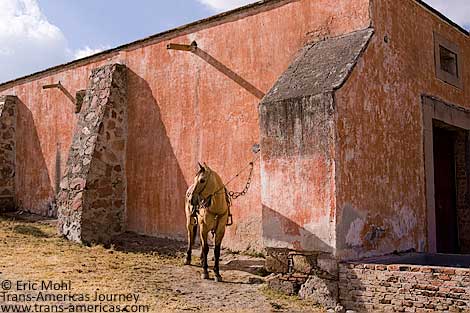 One of the horses enjoys a sunny rest while we enjoy lunch at Hacienda San Cayetano.