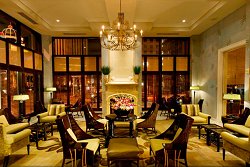 Someone was throwing buckets of water at me—not just from above but from all sides—as I sloshed my way through a classic southern spring downpour and into the enormous, flamboyant (part southern belle, part party animal) lobby of the Loews New Orleans Hotel. As if on cue, someone handed me an enormous dry towel. Even more impressive? The person handing me the fluffy white lifesaver was not someone sent down from housekeeping, but a be-suited manager. A quick look around the lobby revealed more suits. With foul weather descending, the hotel had dispatched its big guns to make sure that guests were greeted with a smile (and a towel) despite Mother Nature’s hissy fit outside. New Orleans is, after all, a city where rising water inspires a potent brand of self-sufficiency in its citizens.

So far so good, but I remained nervous about one thing. The entire Loews group of hotels has adopted the Loews Loves Pets program which encourages guests to bring their furry friends with them by providing pet amenities including a water bowl, a toy and even a veterinarian-approved room service menu (Bow Wow Tenderloin anyone?). I’ve got nothing against dogs and cats, but I don’t want their hair (or worse) in my hotel room.

I needn’t have worried. The Loews housekeeping staff has adopted enhanced cleaning procedures and they use specially-filtered vacuums to ensure that my room contained neither hide nor hair from the previous guest’s best friend. 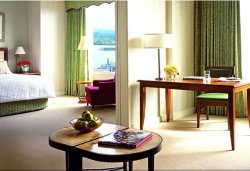 What my room did contain was a lot of square footage. Of the hotel’s 285 rooms, almost half offer more than 530 square feet (the hotel claims to have the city’s largest king size rooms). And because guestrooms don’t even start until the 11th floor of the hotel, each and every one of them has a view of either the charming French Quarter, the bustling business district or the meandering Mississippi River which can be seen from three sides of the property.

Every room is decorated with original hand-tinted black and white prints of romantic, peaceful, even poetic New Orleans and Louisiana scenes taken by local photographer Harriet Blum and bathrooms are stocked with Bloom toiletries.

The 8th floor is home to a large fitness room that has big windows and a full complement of  Cybex equipment,  a 50’ lap pool, a whirlpool and a dry sauna as well as the Balance Spa  which offers a menu of surprisingly well-priced services such as an 80 minute Swedish massage for $110 and a 30 minute manicure for $30.

But the room I was most interested in was the Swizzle Stick Bar just off the lobby. This is the domain of Lu Brow who, in a city bursting with star mixologists, was recently voted the city’s top bartender by New Orleans magazine. Lu calls herself a Bar Chef and refers to the Swizzle Stick as “the kitchen.” Her passion for well-made libations is reflected in the cocktail menu which offers so many classics and inventive twists on classics that you almost need a drink just to make up your mind. My choice? The Corpse Reviver which was complex and intriguing (gin and Lilet?) without being sweet. 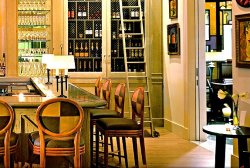 In fact Lu stays away from sweet, preferring to wow your palette with more sophisticated flavors. To showcase the cocktail’s full potential Lu has begun offering Bar Chef Tables. Up to four guests can book a Bar Chef Table in the Swizzle Stick where dinner is served from the hotel’s Café Adelaide, each course paired with a cocktail instead of wine. Add a pinch of Lu’s enthusiastic and knowledgeable conversation and shake.

Though I was tempted by the Bar Chef Table, I had a dinner reservation at local celeb chef John Besh’s newest restaurant, Luke—the latest addition to his growing stable which includes the super-swanky and highly-acclaimed Restaurant August.

Everybody knows that New Orleans is full of great food and it’s easy to find a fantastic affordable po’ boy (Crabby Jack’s—get the duck) or plate of jumbalaya (Mother’s) or an amazing expensive meal. But it can be difficult to find a restaurant with ambiance, inventive food and good service in the mid-price range.

Not anymore. Besh—who was the 2006 James Beard Award winner for Best Chef, in the Southeast—describes Luke as “Alsace meets New Orleans” in the tradition of 19th century German brasseries featuring food influenced by German, Jewish and Creole cuisines.

What’s truly remarkable about Luke, however, is that they do all that at prices that make eating at Luke even more of a pleasure. The Shrimp Farci, for example, includes three huge shrimp over-stuffed with crab and crawfish served with new potatoes and green beans for just $15. Elegantly served fresh oysters are only pennies more apiece than they are at slurp-‘em-down stand up bars and no wine on the extensive list that’s heavy on  bottles from the Loire, Alsace, and Savoie regions is over $45—most are under $30.

Visit Luke if you’re looking to get five-star full without the five-star bill, then head back to the Swizzle Stick for a nightcap.