As scenic drives go, the road to the Orosi Valley in Costa Rica is hard to beat. You travel through mountains and past coffee plantations. You see actual pine trees. Then you reach the Orosi view point with epic views down the lush valley including the town of Orosi and the wiggly Reventazon River and Tapatini National Park beyond. 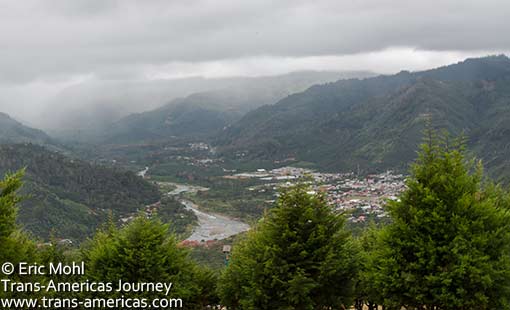 The Reventazon River, Tapatini National Park, and the town of Orosi as seen from the Orosi view point in Costa Rica.

The viewpoin is a great place for picnics or just an excuse to stretch your legs. There are lawns and covered picnic tables complete with sinks and grills. The main draw however, is the view, but the day we stopped at the mirador light drizzle and clouds obscured the valley below.

The town of Orosi can’t be more than a dozen square blocks, but almost all of it is clean and tidy in that kind of way that so many proud agricultural towns are. In Orosi stay at Hotel Reventazon where US$30 got us a very basic multi-bed room with a bathroom, parking, and Wi-Fi. Honestly, the nearby Montaña Linda was a better option but they didn’t have Wi-Fi and, you know, this travel blog doesn’t create itself.

An unexpected pleasant surprise in Orosi was Cafe Panaderia Suiza. Run by a Swiss woman named Francisca, this petite cafe sold great bread and great coffee made with beans from the area (much more about that in a minute).

Francisca also sold Hexagua which is a strong, clear sugarcane hooch. There was a witch on the label. We weren’t brave enough to try it.

Costa Rica isn’t exactly bursting with sites of cultural or religious significance but sleepy Orosi is home to one of them. The town’s church, Iglesia de San José de Orosi, is one of the few colonial structures that has never been destroyed by earthquakes. Built in 1743, it is now the oldest religious structure that’s still in use in Costa Rica and a National Monument as well. 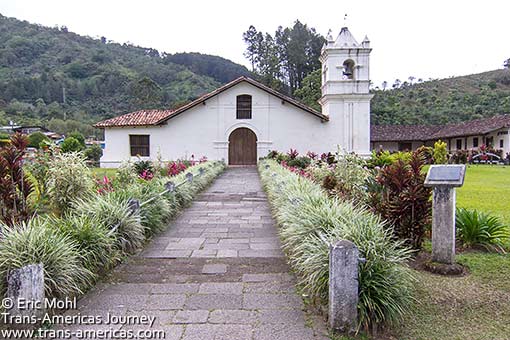 Built in 1743, the Iglesia de San José de Orosi in Orosi, Costa Rica is the oldest church in the country that’s still in use.

That’s a lot of coffee

The highlight of our time in the Orosi Valley was meeting Ricardo Falla, owner of Chucaras Hotsprings Estates which produces some of that great local coffee we teased you with earlier. 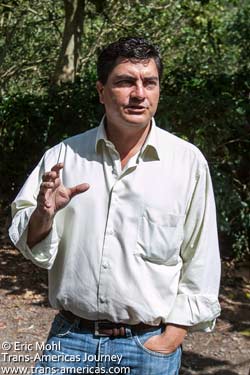 Ricardo owns nine coffee plantations including 4 million coffee trees, all at an elevation of 3,450 feet (1,050 meters) or higher which means most of his beans qualify as higher quality high-altitude coffee. 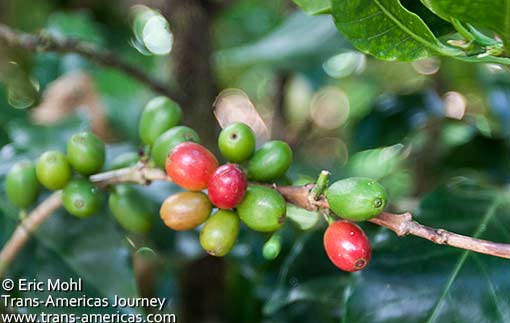 The operation, which the Falla family started back in 1900, now employs 500 people and runs on what Ricardo calls “sustainable” (not organic) principles. For example, his coffee bean processing facility (called a beneficio in Spanish) reduces energy use because it’s built on a hillside to harness the power of gravity. 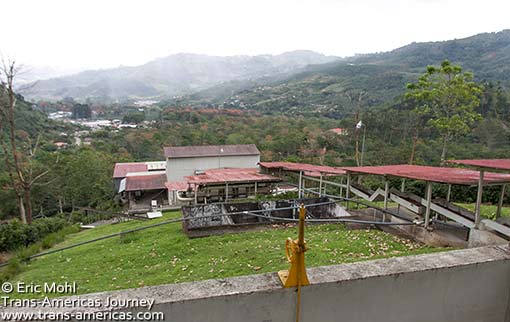 The Chucaras Hotsprings Estate coffee beneficio uses less energy during the processing of the coffee beans because it’s built on a hill and uses the power of gravity to keep the beans moving through the various stages.

Traditional coffee bean processing uses an outrageous amount of water but Ricardo has implemented water saving measures at his beneficio as well. 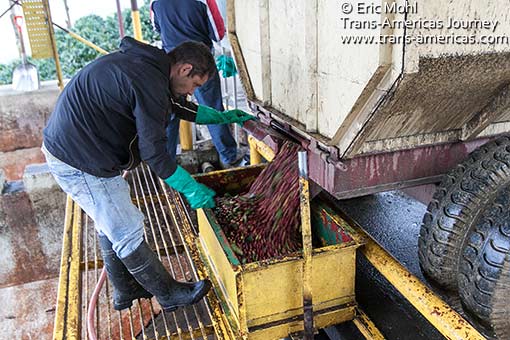 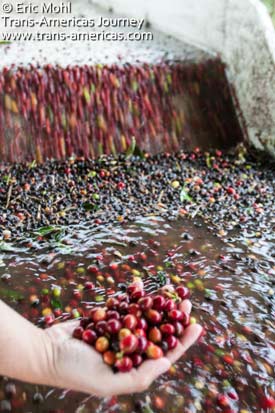 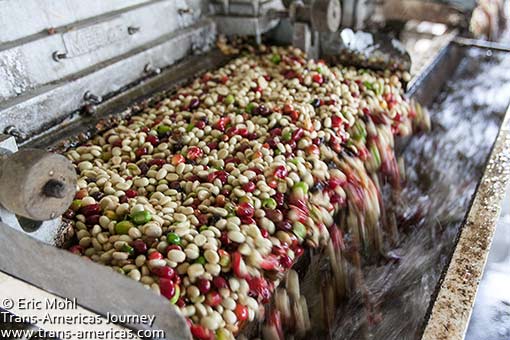 De-pulped coffee beans continue the process of going from plantation to percolator at the Chucaras Hotsprings Estate beneficio in Costa Rica’s Orosi Valley. 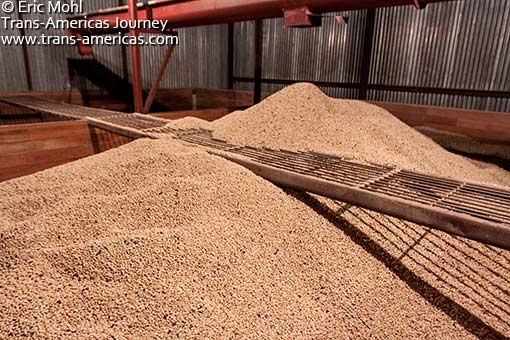 Ricardo wowed us even more when he invited us for lunch at his latest project. Last year Ricardo turned a 100-year-old wooden house into a five-room rental. It’s very Martha Stewart but with views of volcanoes through the windows. 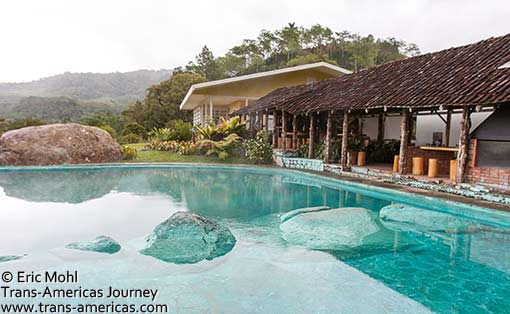 This 100 year old home on the Chucaras Hotsprings Estates property is now a fully renovated and super stylish vacation home that sleeps 10, has views of volcanoes and a hot springs fed pool. No wonder George Clooney stayed here.

George Clooney has slept here and you can too–maybe even in the same bed. The nightly rate for the whole house, which sleeps up to 10 people, is US$800 including breakfast which, of course, is served with great coffee ([email protected], +506 8817 5703). 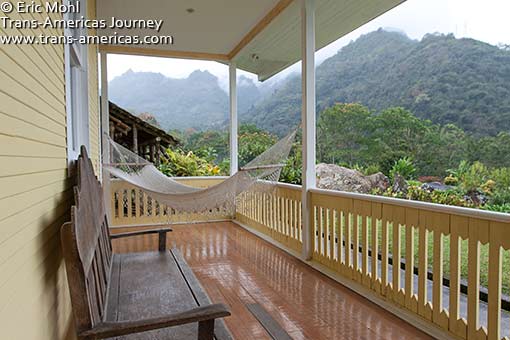 House guests also get one more awesome amenity: a hot spring fed pool with valley and volcano views as you soak. 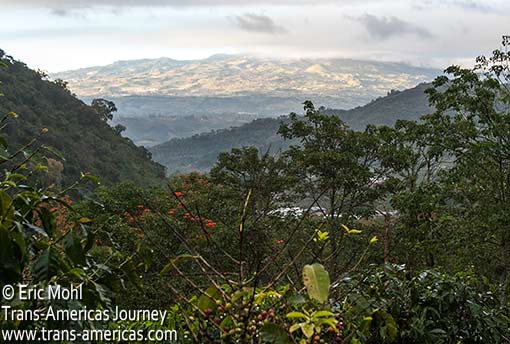 Looking down the Orosi Valley in Costa Rica toward the Cartago Valley and the active Irazu Volcano in the distance behind the clouds.

Get our top tips for buying and brewing the best coffee.