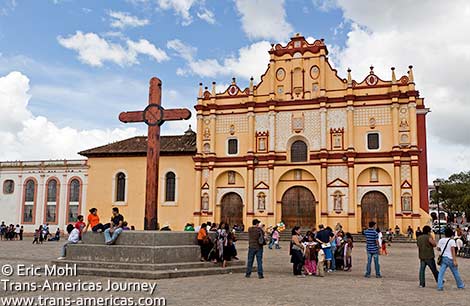 The Cathedral in San Cristóbal was finished in 1815 and has been rebuilt several times since following damage from earthquakes. It’s located just off the main plaza where Zapatistas made a stand against the Mexican Army in 1994.

Zapatistas past and present in San Cristóbal de las Casas

As the road climbed into the highlands of Chiapas the weather cooled. San Cristóbal as everyone calls it) is at nearly 7,000 feet (2,100 meters) and the temperature change came as a welcome relief after weeks in the steamy lowlands. The higher we went something less-tangible changed as well as the villages took on an assertiveness of personality rarely seen in the rest of Mexico.

San Cristóbal de las Casas was named after Bartolomé de las Casas, a Dominican monk who lived in the area in the 1500s where he became Bishop of Chiapas and, more importantly, a dedicated and effective defender of the rights of the local indigenous communites. He remains beloved to this day in this heartland of living Mexican indigenous culture. 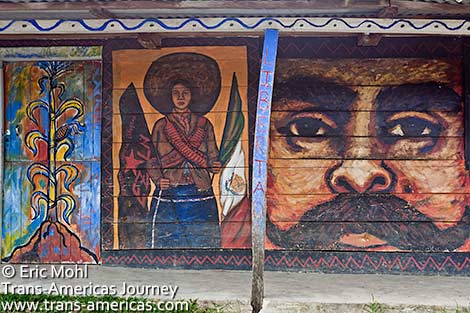 This mural, on a building in an autonomous village run by Zapatistas, depicts corn (a symbol of the land), an indigenous woman defending her rights, and Mexican revolutionary Emiliano Zapata–the inspiration for the term Zapatista.

By the time we neared San Cristóbal we were in the midst of people proudly wearing traditional clothing and tending to the remains of the area’s famous Zapatista uprising as evidenced by numerous hand-painted signs and murals calling for land rights and better education for poor communities. About an hour short of San Cristóbal we passed the Oventic caracol, an autonomous village run by the EZLN (Ejército Zapatista de Liberación Nacional, the Zapatista government) which was guarded by men wearing the Zapatista’s signature red bandanas over their faces. 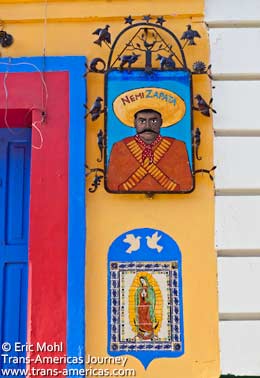 Stores in San Cristóbal sell crafts that range from revolutionary to religious.

Eric was in San Cristóbal just a few weeks before the January 1, 1994 Zapatista uprising, launched on the day the North American Free Trade Agreement (NAFTA) went into effect. Using NAFTA as the example that summed up economic wrongs suffered by Mexico’s indigenous poor, Subcomandante Marcos and Comandante Ramona lead thousands of armed villagers in a surprise attack on the Mexican army which culminated in a bloody shootout in San Cristóbal’s main plaza.

Though technically still at war with the Mexican government, the days of palpable Zapatista revolution seem gone, at least on the surface. The Zapatista’s demands for autonomy, rights to land and natural resources for the local people, and a more equal economic and educational system were mostly never met and the Mexican army continues to maintain an obvious presence in the area.

However, we were glad to hear a number of locals assure us that the area’s indigenous communities did gain a new and enduring sense of pride and self-confidence from their short and spectacular uprising.

Modern San Cristóbal, which was given Pueblo Magico status by the Mexican government in 2003, now has pedestrian malls full of chic cafes. Indigenous women stroll around selling shawls, not revolution (at least not openly). Mexican tourists flock here both for the weather and for the chance to glimpse another side of their culture. Musicians and graffiti artists liven up the streets. 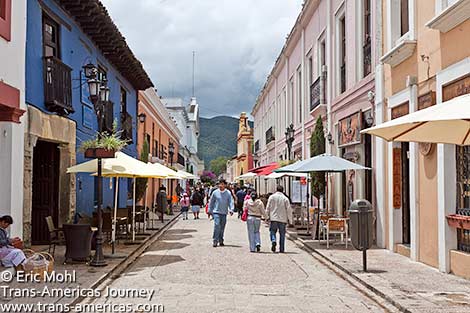 The cosmopolitan cafe culture along Hidalgo Street which is closed to traffic.

The Zapatista actions in 1994 did leave another legacy in modern San Cristóbal: lots and lots of foreigners. Subcomandante Marcos and the revolution he led struck a chord with people around the world–especially those with socialist or Marxist-leaning politics. Then the New York Times called the Zapatista movement “the first post-modern revolution,” inspiring even more Europeans and even some US citizens to travel to San Cristóbal to help in any way they could. 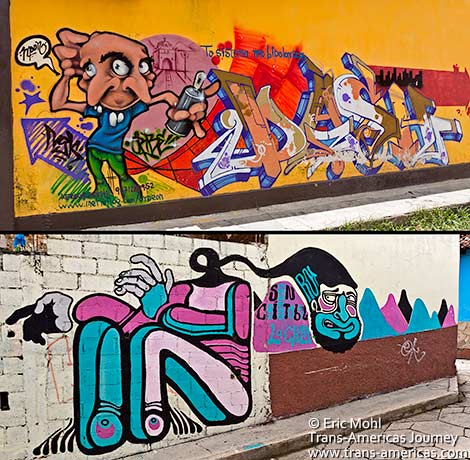 The work of street artists is more common in San Cristóbal than in many other Mexican cities.

Many of them stayed and were joined by fellow countrymen and today you can’t walk down the street without hearing someone speaking English, French, German, or Hebrew. This population of foreigners is part of the reason San Cristóbal has gotten the hospitality thing down so well. The French have opened real bakeries.

The Israelis have opened at least one fabulous falafel shop–don’t miss a meal at this place just a few doors down from the totally-not-worth-it Cafe Museo. Light falafel balls, homemade pita bread, and all the toppings for 40 pesos (about US$ 3.50). Be warned–they’re often out of falafel balls by 4 pm. 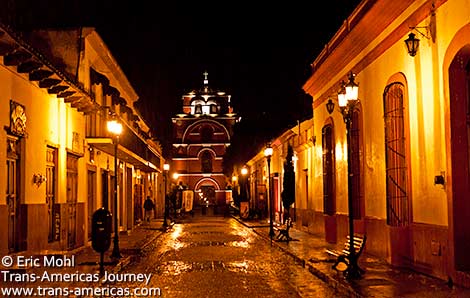 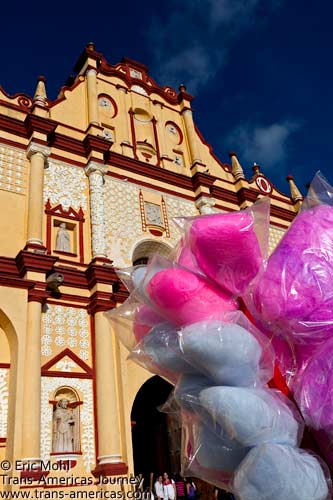 A cotton candy vendor in front of the Cathedral in San Cristóbal de las Casas.

There are locally-run standouts too. For example, every Wednesday and Saturday night around 8 pm a red light bulb appears in the darkness down Leon street a short walk out of central San Cristóbal. This is the signal that some of the tastiest tamales in Mexico are ready. Filled with a mind-boggling variety of meats, chilies, cheeses and vegetables each variety is shaped and tied differently so the cook can tell them apart as she fills your order from a huge steaming pot under a tarp for 3 pesos (about US$0.25) each. 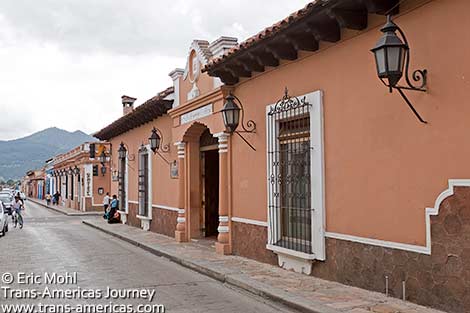 Despite the influx of foreign residents and international tourists, San Cristóbal remains a Mexican city with more than its share of classic colonial architecture. That’s part of the reason the Mexican government has deemed San Cristóbal to be a Pueblo Magico.

Karen’s favorite local haunt was La Viña de Bacco a true wine and tapas bar. Order up an 18 peso (US$1.50) glass of wine and a small snack (cheese, cold cuts, bean spread, olives, etc.) comes with it. Enjoy. Repeat. The place even delivered good music including Ben Harper on the sound system and local busking bands like Sin Fin, a funky guitar and trumpet duo from Colorado that was playing and busking through Latin America. 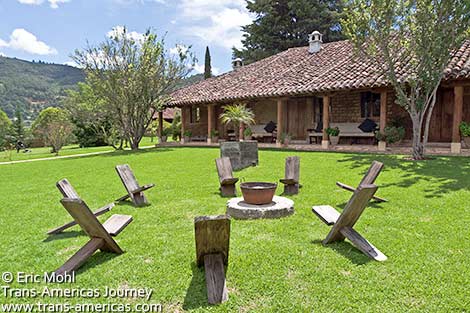 Where to sleep in San Cristóbal de las Casas

Adding to our sense of contentment was the fact that when we arrived in San Cristóbal we checked into the Parador San Juan de Dios where the fascinating owner and renowned antiques and art dealer Mario Uvence had generously agreed to host us for a few nights so we could check out his 15 room hotel in a 16th-century farmhouse which he’s lovingly resorted and filled with museum-quality art and antiques. Not to mention fluffy down comforters and working fireplaces. 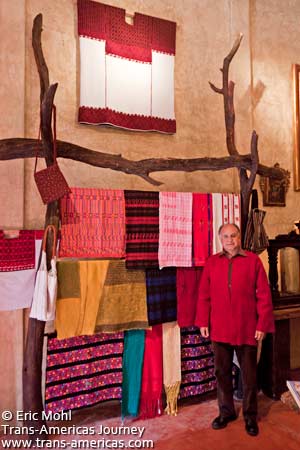 Even if you’re not staying at Parador San Juan de Dios it’s worth a visit to the gift shop and small (but amazing) museum Mario has established on hotel grounds. The gift shop has some of the chicest examples of local handicrafts anywhere in Chiapas (great if you’re looking for a special souvenir or gift). The museum, called Eklektic, is full of 17th to 21st-century religious pieces from Mexico and around the world including stunners like a miniature baby Jesus carved out of ivory.

After about 48 hours we had to admit that we needed much more time in San Cristóbal so we did the only sensible thing: we rented a room in an apartment at a rate that was even cheaper than the hostels in town.

We used our extra time well with trips through the indigenous communities around San Cristóbal including Chamula where even the decidedly lukewarm welcome couldn’t take the shine off one of the most fascinating churches we’ve ever seen, and a visit to an eerie pagan/Christian cemetery.