Back to the Past – Santa Fe de Antioquia, Colombia

Santa Fe de Antioquia is a popular weekend getaway for paisas (people from the department of Antioquia). Most make the 50 mile (80 km) drive from Medellin to go back to the past and enjoy all of the things that have earned this town, founded in 1541, a place Colombia’s elite Pueblos Patrimonios network: colonial architecture and churches, cobblestone streets, and a pleasing sense that there’s nothing much to do but grab a beer and soak it all in. You could travel there as a day trip, but we found reasons to stay. 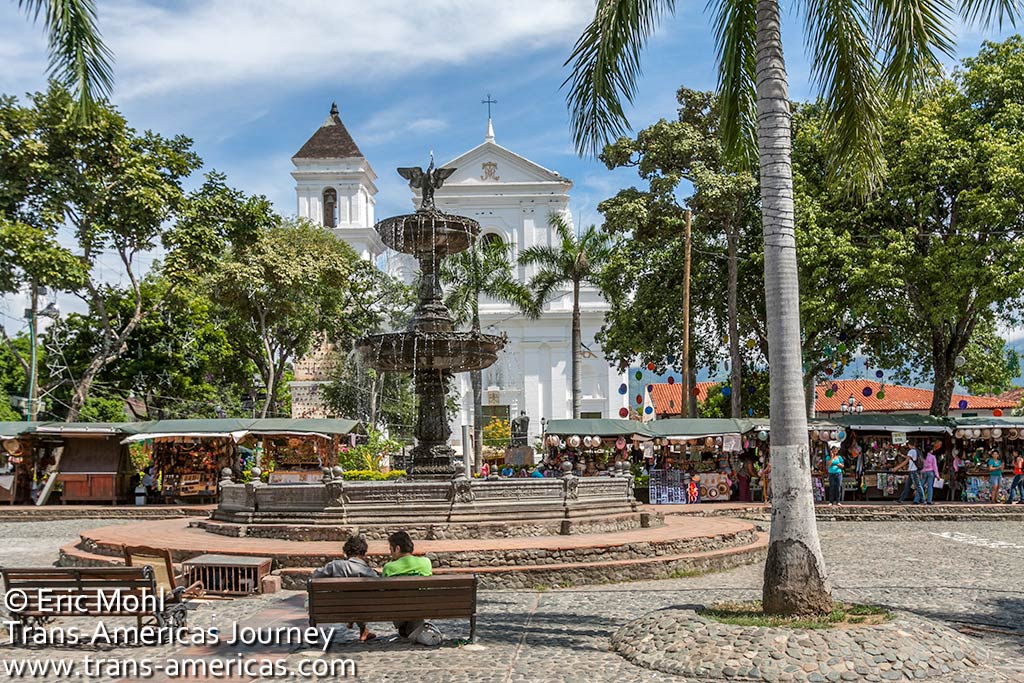 Getting to Santa Fe de Antioquia

On our way from  Medellin to Santa Fe de Antioquia, which was the first capital of Antioquia province before Medellin took over, we made a quick stop at the picturesque Puente de Occidente (Bridge of the West). When the bridge was finished in 1894, the 950 foot (290 meter) span, which crosses the Cauca River, was the longest suspension bridge in South America and the 7th longest in the world. These days the bridge, which is a National Monument, has been restored but only light traffic (motos, small vehicles and foot traffic) is allowed to use it. 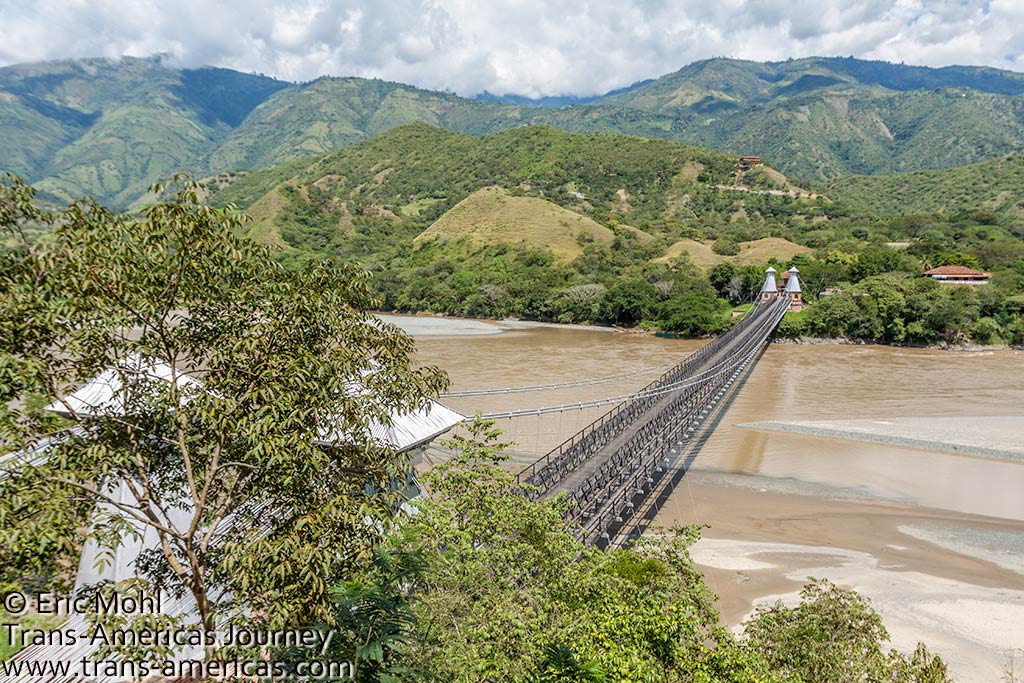 Puente de Occidente (Bridge of the West) was the longest suspension bridge in South America when it was completed in 1894.

As we mentioned, the main reason to visit Santa Fe de Antioquia is to grab a beer and soak in the colonial atmosphere. However, we do have a couple of recommendations about two specific things to do and see in town. 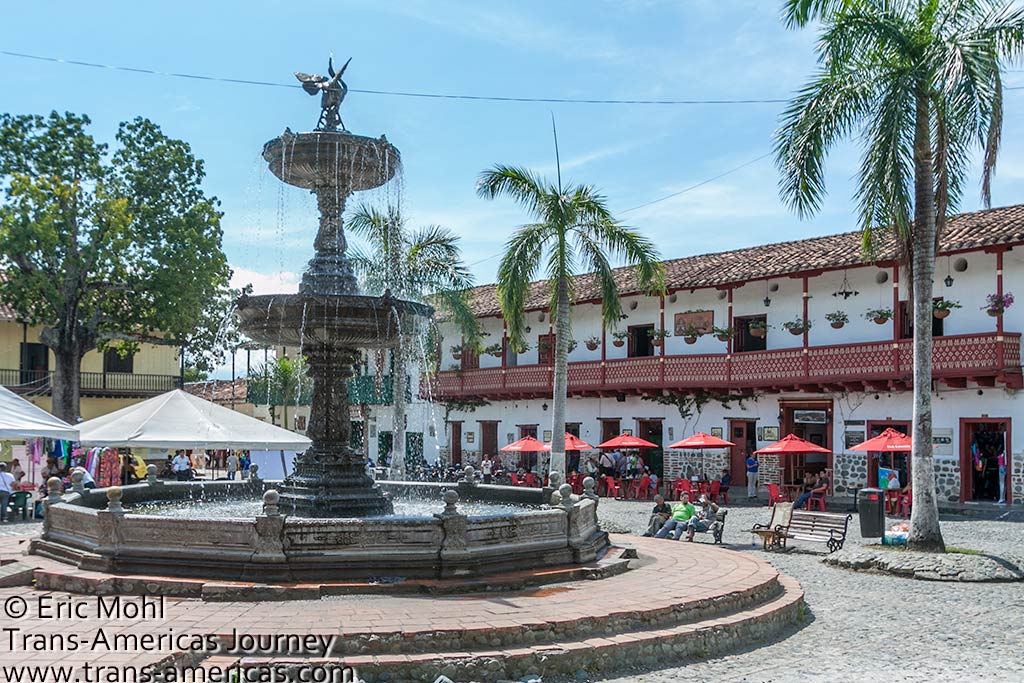 One of many picturesque plazas in Santa Fe de Antioquia. 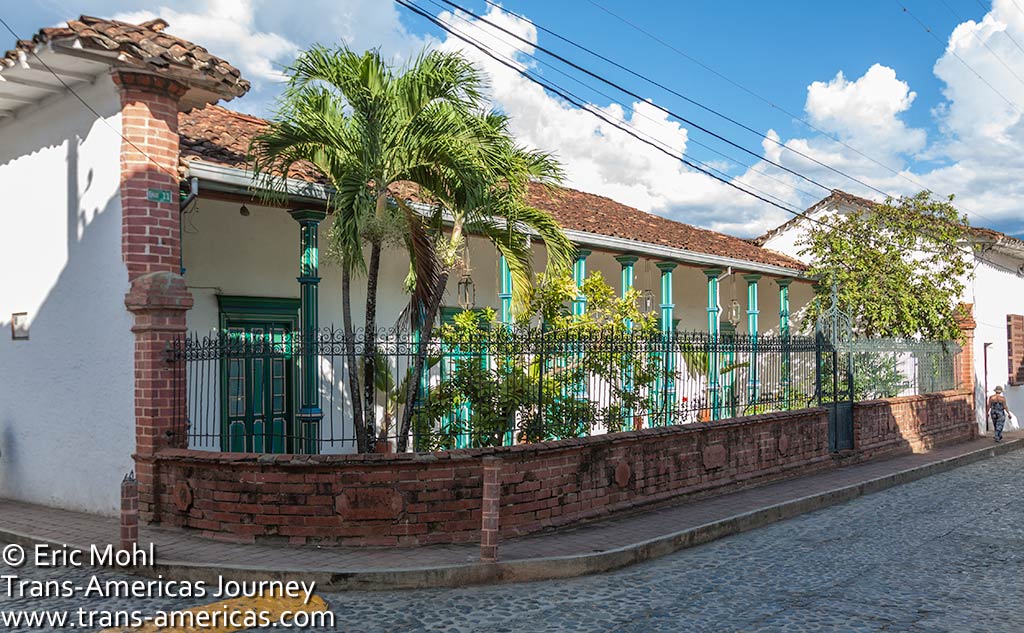 Restored and preserved colonial architecture like this is one reason that Santa Fe de Antioquia is part of Colombia’s Pueblos Patrimonios group of historic towns.

Jorge Robledo Ortiz is a lauded Colombian poet and the founder of Santa Fe de Antioquia. Not surprisingly, there’s a charming little museum dedicated to his life,  accomplishments, and legacy. For a glimpse of artists shaping modern Santa Fe de Antioquia, head for La Comedia. This bar and restaurant is a magnet for creative types and doubles as a movie theater. It’s a relaxed place to eat, drink, people watch, enjoy the excellent soundtrack and appreciate the rotating art shows. 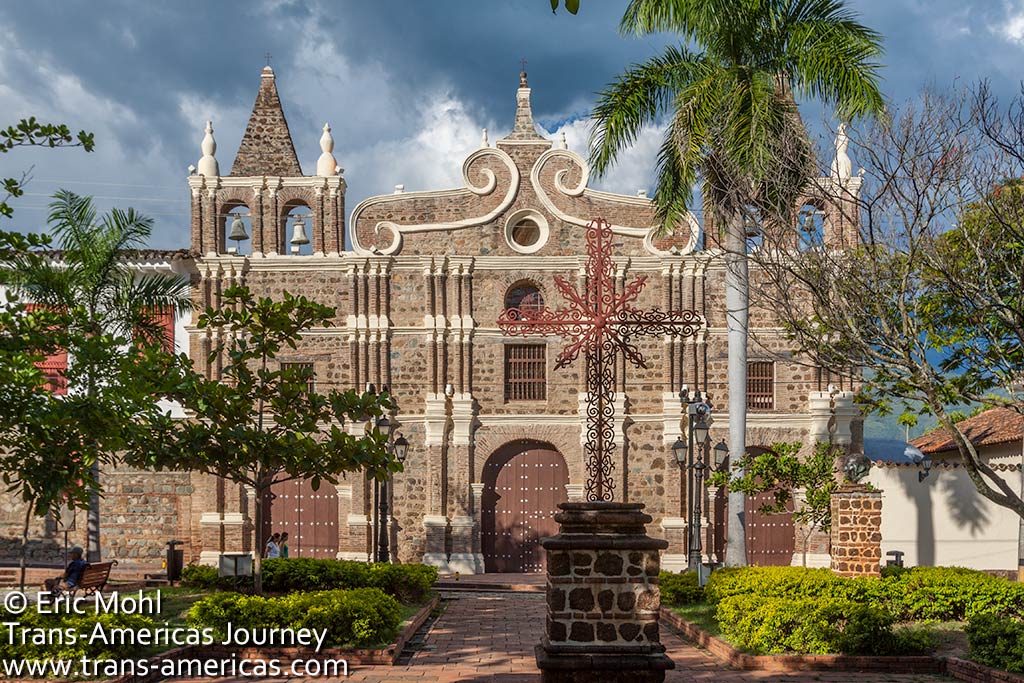 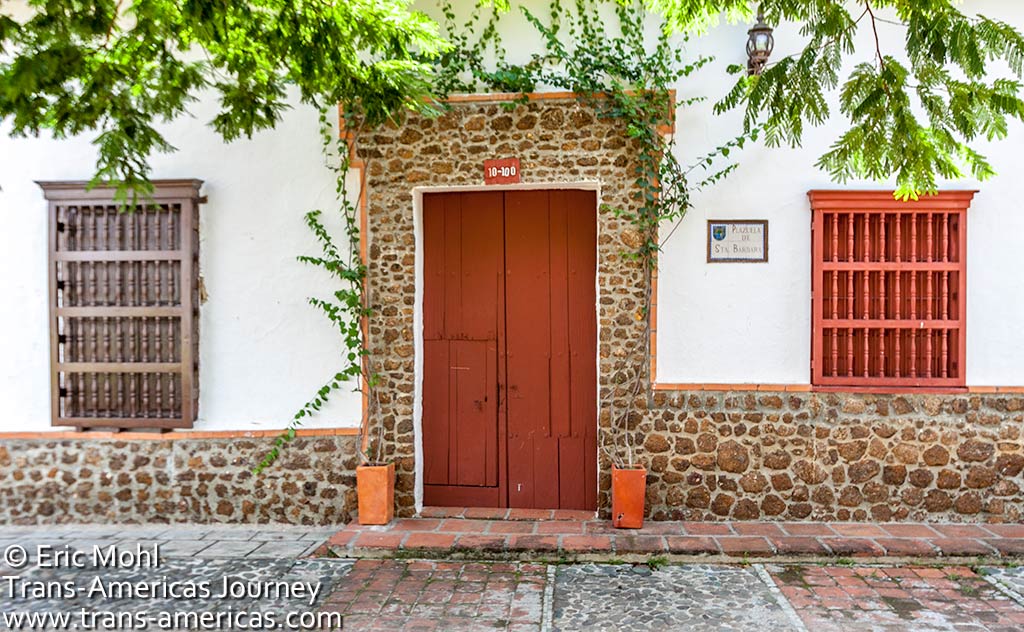 In Santa Fe de Antioquia we stayed at the Hotel Mariscal Robledo which is located on a small plaza. It’s been in business since 1946 which explains why the place is filled to the rafters with antiques (or old dusty junk, depending on your POV). They offer a wide range of rooms, a big, inviting pool, and a tranquil atmosphere. But don’t take it from us. Actors Tara Reid and John Leguizamo are up on the celebrity guest wall, so there’s that.
Book Now 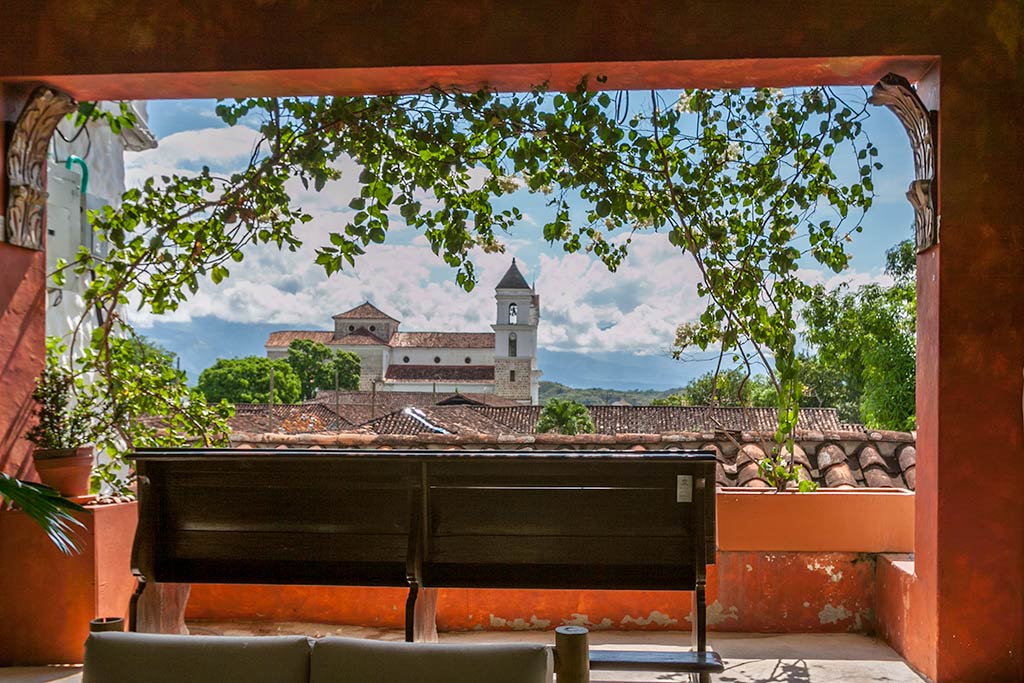 A church view from one of the patios at the Hotel Mariscal Robledo in Santa Fe de Antioquia. 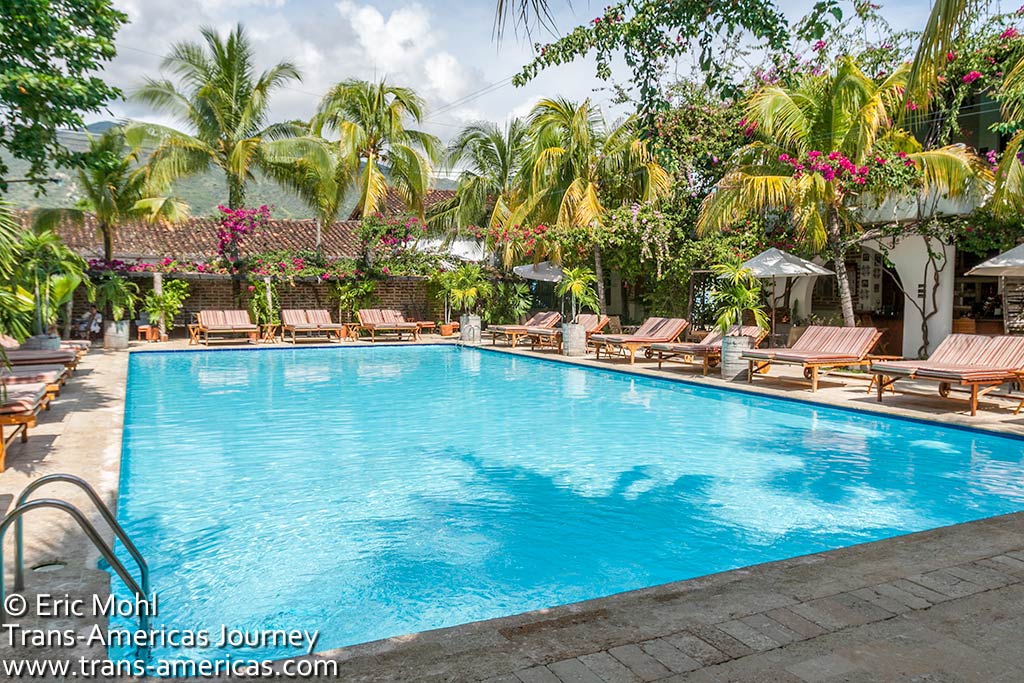 The pool at the Hotel Mariscal Robledo in Santa Fe de Antioquia. 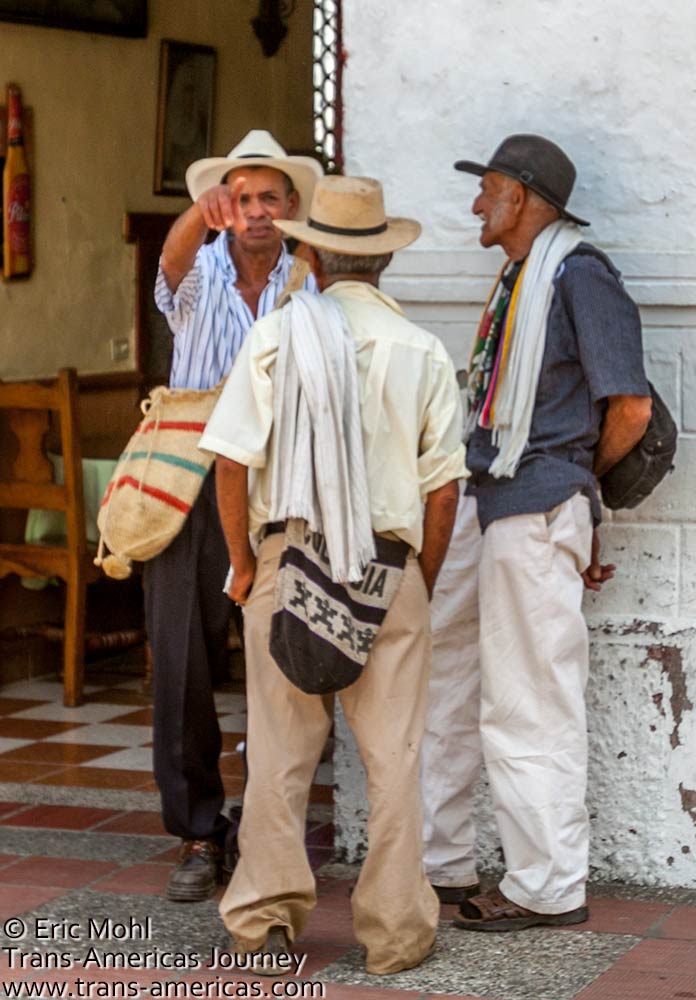