In September 2016 we drove more than 1,900 miles (3,000 km) from Cuzco, Peru to Porto Jofre deep in Brazil’s Pantanal area. An additional 550 miles (885 km) were covered by plane from Porto Velho, Brazil up to Manaus in the heart of the Amazon followed by a 22 hour bus ride from Manaus back to Porto Velho via Brazil’s infamous BR-319 road.  Here’s our road trip driving route for September 2016 in Peru and Brazil. 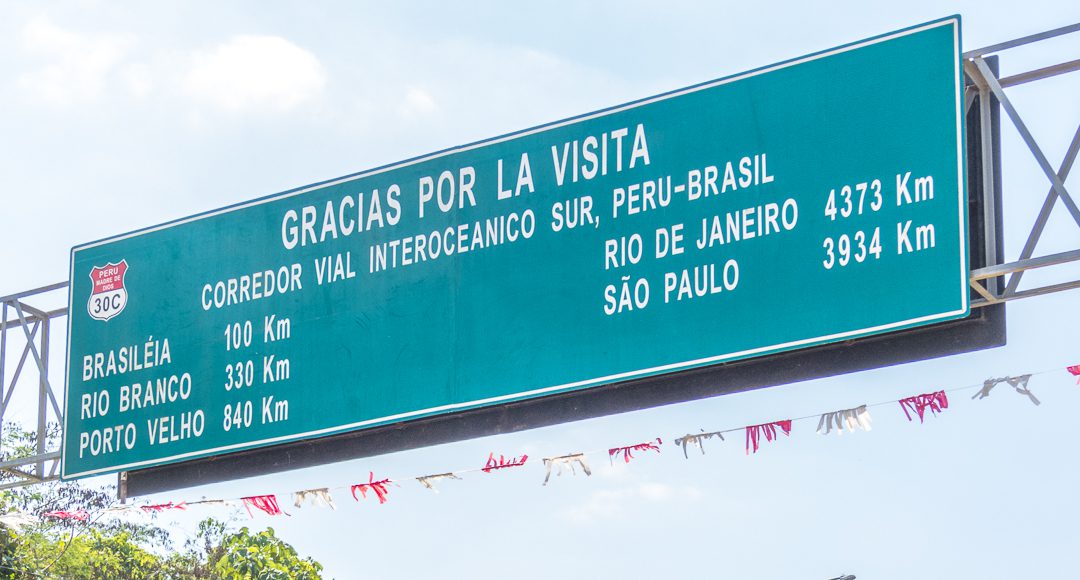 We knew we were going to clock some serious miles in September when we saw this mileage sign at the Peru-Brazil border.

Our road trip driving route for the month of September 2016 actually began when we broke away from the Cuzco region. From Cusco we drove over the Andes and down to Porto Maldonado in the Amazon where we took a side-journey by boat into the Tambopata Nature Reserve.

We left Porto Maldonado and crossed into Brazil which turned out to be the easiest, fastest, and most remote border crossing yet. We knew we were really in the middle of nowhere when the mileage sign near at the border indicated we were 2,217 miles (4,373 km) from Rio de Janeiro. Did we mention that Brazil is big?

For the rest of the month we crossed the Amazon in one way or another. After crossing the border we visited the surprisingly tidy and pleasant city of Rio Branco where we should have stayed longer. Then we continued on to Porto Velho from where we took our plane/bus side-trip to Manaus and back.

Once back in Porto Velho we made a 1,000 mile (1,600 km) bee-line to the Pantanal region where we traversed another notorious road, the Trans-Pantaneira Highway, to reach Porto Jofre where we finally saw jaguars in the wild.

Below is a map of what all that South American road trip driving in Peru and Brazil looked like during September of 2016.

And you can see all the action in our drive-lapse video, below, which was shot by our Brinno TLC200 Pro HDR Time Lapse Video Camera which is mounted on the dashboard of our truck. Watch as we cross the Amazon region (minute 4 through 12) where, you will note, much of the landscape, except for a few pockets of protected jungle, has been deforested to make way for large cattle ranches. Minute 13 through the end of the video lets you follow along on the Trans-Pantaneira highway which was so filled with wildlife it was like our a South American Safari.