Worth the Hype and High Prices? – Tayrona National Park, Colombia

Tayrona National Park is Colombia’s first national park and it protects a string of beautiful beaches. The park is one of Colombia’s top five most talked about travel destinations, but is Tayrona worth the hype and high prices? 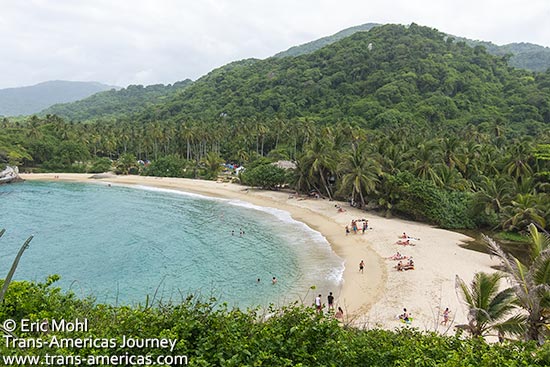 El Cabo Beach, just one of the beautiful coastal spots that are protected within Tayrona National Park in Colombia.

The hype about Tayrona National Park

Established in 1969, Tayrona National Park is located in Northern Colombia. The mainland beaches around Cartagena, another top travel destination in Colombia, are not very nice so the promise of postcard-perfect beaches within the park, about a 4-hour drive away, is very enticing. In 2012, almost 294,000 people believed the hype about Tayrona and visited the park, making Tayrona the second most visited of the more than 50 national parks in Colombia. 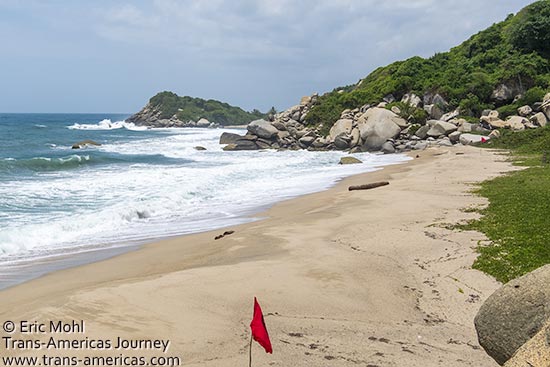 A red flag warns of dangerous conditions in the water. Riptides plague much of the coastline in Tayrona National Park.

Tayrona National Park protects a long stretch of coastline including a string of beaches that are truly beautiful–blue/green water, white arcs of sand, shoreline palms, and vegetation. These famous beaches are reached via a rolling trail that meanders along, sometimes slightly inland, sometimes on the beaches themselves. Be prepared for lots of walking in sand and lots of sun exposure.

From the parking lot at the Canaveral entrance, we hit the trail and about 45 minutes later we came to Arrecifes Beach where the water was too rough for swimming (rip tides plague much of the coastline within Tayrona). After admiring the view and cooling off in a patch of shade, we moved on to the next beach. 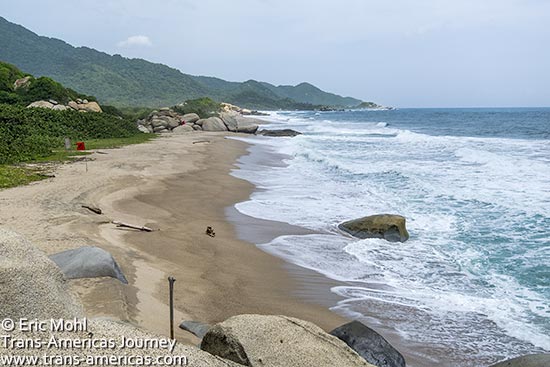 Arricefes Beach is lovely to look at but the water here is too rough to swim in.

As the name would imply, swimming is possible at La Piscina (The Pool) Beach. About a dozen locals had basic snack stands set up at La Piscina too and they were doing a moderate business in overpriced junk food and beverages (more on that later). 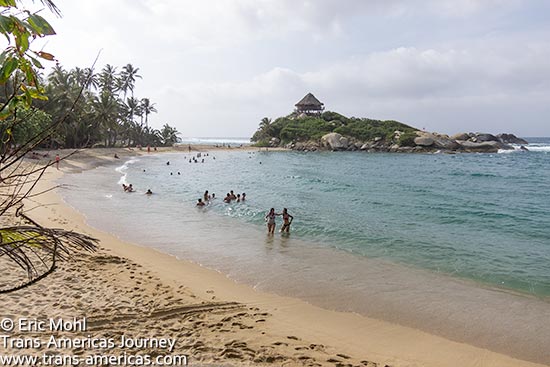 El Cabo Beach is the most built up and most crowded beach within Tayrona, drawing locals and travelers with its long beach and relatively calm water.

About three leisurely hours after leaving the parking lot we reached Cabo San Juan de la Guia Beach (aka, El Cabo), the most popular and developed of the bunch. Here we found an open-air restaurant, a huge camping area (more on that below), and a beach full of backpackers and locals. A bit more poking around revealed an informal nude beach around a rocky elbow in the coastline here. Just sayin’. 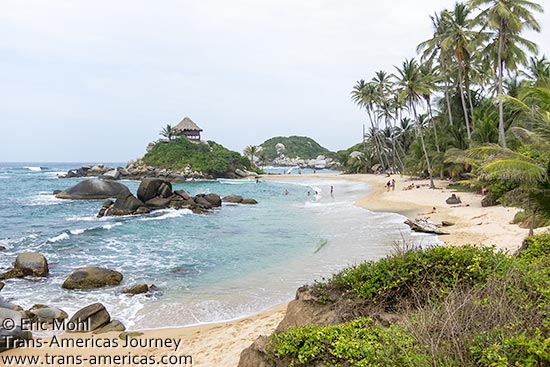 There’s a camping area slightly inland from El Cabo Beach or you can rent a hammock in the thatch roof Hammock Hut on the rocky outcrop in the distance.

Though the park is said to harbor more than 50 endangered species, we did not see much wildlife in the park–really just two cara caras, some lizards, and a frog.

We entered the park at the Canaveral entrance and paid the entrance fee (39,500 COP or about US$16.50 pp and entrance fees seem to go up every year). We’d been warned that visitors to Tayrona are not allowed to bring in plastic bags, alcohol, or anything in glass and park officials did half-heartedly look in the cargo area in the bed of our truck but they never looked in the cab or in the backpacks we had with us. We drove on to the (free and guarded) parking lot and could have easily entered the park from there with backpacks full of bottles and plastic bags. In fact, we saw plenty of other visitors with plastic bags and bottled beverages in the park. And who can blame them? 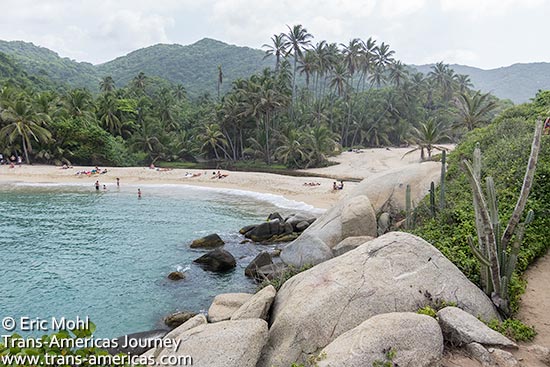 Prices for food and beverages from vendors inside Tayrona are at least double what they’d be outside the park, so expect to pay at least 5,000 COP (US$2) for a beer or soda. That probably sounds like a bargain based on prices in your home country and we do realize that park prices are high due to the effort and expense vendors incur to bring goods into Tayrona. We’re merely pointing out that, by Colombian standards outside the park, prices are high within the park.

If you get hungry, expect to pay park premiums too. For example, the restaurant at El Cabo Beach charges about US$10 per plate. Basic breakfast is more than US$5. To avoid paying the inflated prices, we carried in our own water and snacks and bought beverages from a local Kogi Indian family selling fresh coconut water in a shady spot along the trail. 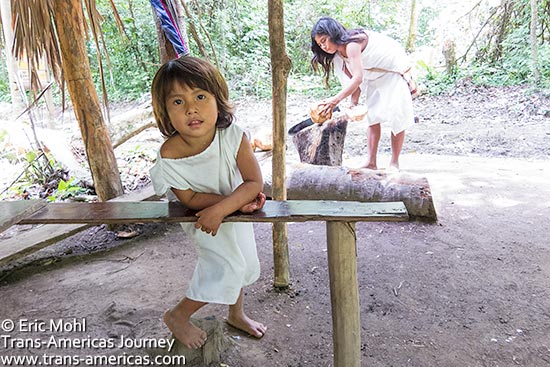 The only thing we purchased inside Tayrona National Park were fresh coconuts from this Kogi family that had set up a makeshift stall along the trail through the park.

We visited Tayrona National Park as a day trip from Taganga Beach (about a 30-minute drive from the park entrance) because we enjoyed Taganga and because we found a value-for-money hotel there and we knew that accommodations any closer to Tayrona are pricey. Ecohabs Tayrona, for example, offers rooms for US$102 to US$321 per night inside the park and even “mid-range” and “budget” accommodations close to the park have jacked up prices. 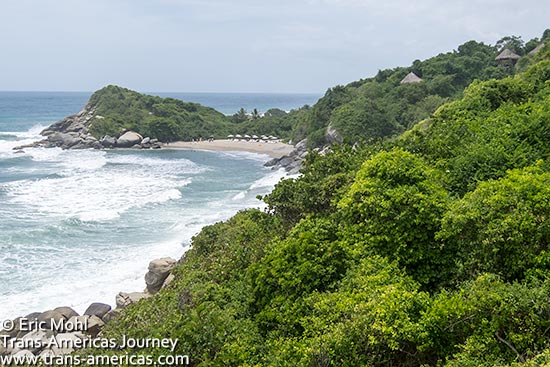 The thatch roofs you can see along the shore are part of Ecohabs, a pricey place to stay inside Tayrona.

There are slightly more economical ways to spend the night in Tayrona National Park, but even the park’s camping options come with a hefty mark up that makes them pricey by Colombian standards. For example, one of the camping areas at Arrecifes Beach charges about US$10 per person per night including tent rental, about US$4 per person per night if you bring in your own tent or about $US7.50 for a hammock and mosquito net. 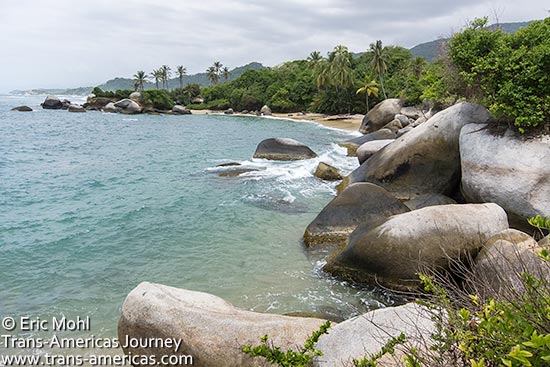 Tayrona is the first national park established in Colombia and protecting shoreline like this is a big reason why the park was created back in 1969.

Camping at El Cabo Beach is even more expensive. The most coveted way to spend the night in Tayrona National Park is in one of the hammocks in the Hammock Hut, a huge, open-air, thatch roof structure built on a rocky outcrop on El Cabo Beach overlooking the sea. That will cost you about US$12.50 per hammock per night and reservations are highly recommended. The Hammock Hut at El Cabo is so picturesque that it was on the cover of the 2012 Lonely Planet guide to Colombia. 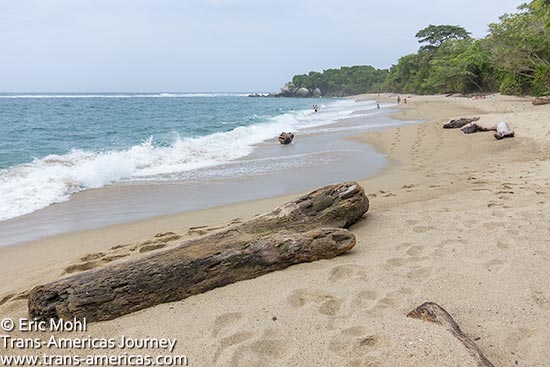 The trail through Tayrona National Park alternates between inland scrub and sandy shoreline.

If you plan on camping inside Tayrona you’re probably going to have camping gear and supplies with you which means you may want to consider non-hiking options to get into the park. You can rent horses to ride and/or carry your gear in or you can take a small open water taxi boat from Taganga or from Santa Marta to El Cabo beach for 25,000 COP/US$10 per person to the beach and 45,000 COP/US$18 per person back to town. 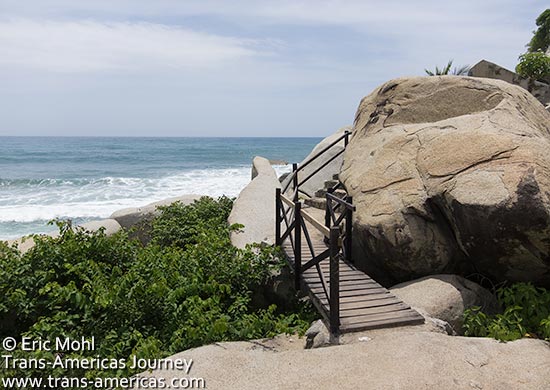 Part of the trail through Tayrona National Park.

So, is Tayrona worth the hype and high prices?

Tayrona was the first Colombian national park that we visited and it was certainly beautiful and we’re glad we saw it but, in our opinion, other less famous parks in the country deliver more bang for the buck including volcano and condor filled Lost Nevados National Park and paragliding Chicamocha Canyon.

What do you think? Is Tayrona worth it? Let us know in the comments section, below.