The Mexican government has recently started bragging that Mexico City has more museums than any other city in the world. We haven’t done a scientific count, however, we are inclined to agree. Here’s our roundup of museums in Mexico City, including a helpful travel tip and one burning question. 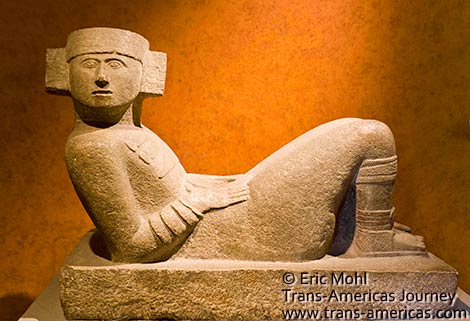 The only place in Mexico where you’ll see a sculpture of Chacmool, the Mayan god of rain, of this quality is in the Museo Nacional de Antropología.

The mind-blowing museums of Mexico City

Museo Nacional de Antropología – The mother of all Mexico City museums, and one of the largest, most comprehensive and most respected anthropology museums in the world, sprawls over 100,000 square feet (930 square meters) and includes eye-popping artifacts from every epoch of Mexican cultural development. Fuel up for the culture onslaught at the Super Tortas stand near the museum entrance. Just follow the crowds for a great sandwich. Note: this is one of the few museums that does not allow foreigners in for free on Sundays—just Mexican nationals. 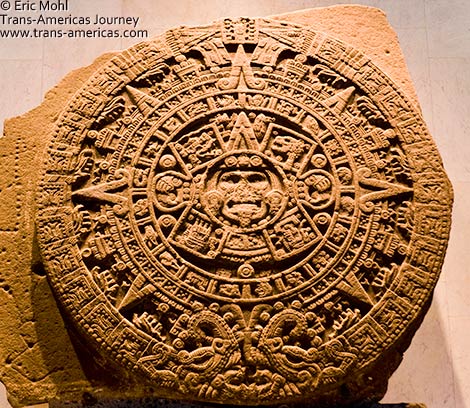 One of the many treasures in the Museo Nacional de Antropología is this Aztec Sun Stone (Piedra del Sol). This 25-ton intricately carved basalt slab describing Aztec life is 12 feet in diameter and was carved in the late 1400s, then lost until it was discovered buried beneath the Zócalo in 1790. 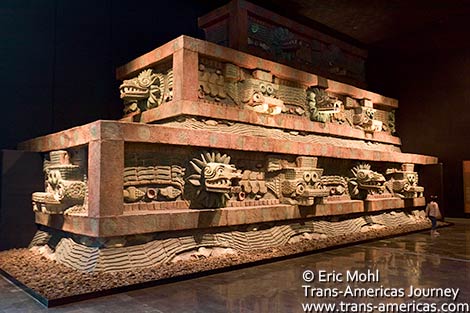 This partial reconstruction of the massive Temple of Quetzalcoatl from Teotihuacán is a highlight of the Museo Nacional de Antropología. For scale, note the young girl walking past the display in the lower right-hand corner.

Museo Rufino Tamayo – Not far from the Anthropology Museum lies this tidy museum which houses the artist’s collection and rotating modern art exhibits. When we were there only one small, thin exhibit was open but when all the exhibition spaces are in use this is a great place for cutting-edge contemporary art.

Museo de Arte Modern – There’s not an artifact in sight at this museum, also within walking distance of the Anthropology Museum, making it a nice way to look into the future after you’ve gotten your fill of gawking at the past. 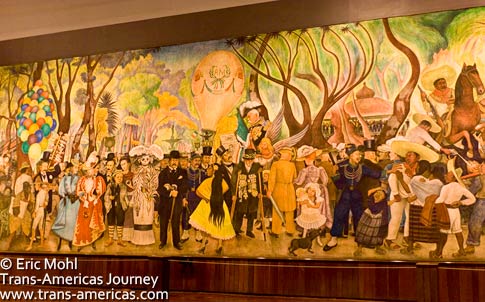 Museo Templo Mayor – Located just off the Zócalo, Mexico City’s main plaza, this indoor/outdoor museum takes visitors along a series of walkways over, through, and around areas of excavation that reveal a treasure trove of  Aztec artifacts found beneath what is now modern Mexico City. In fact, this was the great city of Tenochtitlan, the seat of the Aztec empire, and the very reason why Hernán Cortés and the other Spanish conquistadors built their church (the Catedral Metropolitana which still stands) and their main city (now Mexico City) on this very spot. It’s an unusual feeling to be admiring ancient artifacts and art with the modern Mexico City skyline all around you. 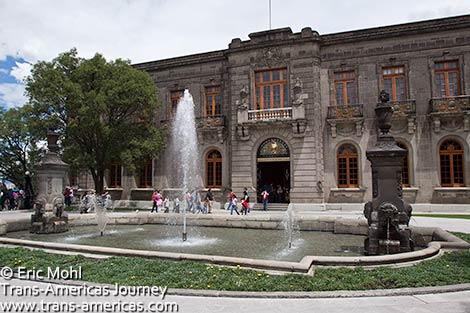 Castillo de  Chapultepec Museo Nacional de Historia – The Castillo de Chapultepec is eerily European looking, and for good reason. Archduke Ferdinand Maximilian Joseph of Austria lived here with his wife after being put in charge of Mexico by the French (who were angry that Mexico had refused to pay its debts) with the support of Mexicans eager for better government. Now the hilltop castle is a wonderful history museum with fantastic views over Chapultepec Park and right up Avenida Reforma into the city center. The archduke’s swanky living quarters are a treat to see too. 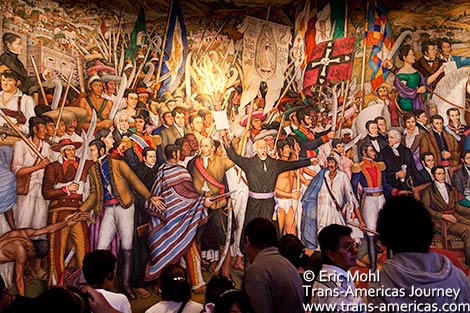 This “Retablo de la Independencia” mural by Juan O’Gorman adorns one of the walls inside the Castillo de Chapultepec Museo Nacional de Historia in Mexico City.

Galeria de Historia  Museo del Caracol – Just below the Castillo de Chapultepec National History Museum is this clever building, which curves in on itself like a snail shell (hence the name – caracol means snail or shell in Spanish). It’s full of chronologically arranged dioramas depicting major moments in Mexican history. It’s great for kids and anyone (like us) who could use a crash course in Mexico’s complicated past.

Museo del Palacio de Bellas Artes – This beautiful theater in the city center is worthy of a visit just for its architecture. It’s also a wonderful place to see some of the most iconic works from some of Mexico’s most iconic muralists including Diego Rivera, Jose Clemente Orozco, and David Alfaro Siqueiros. 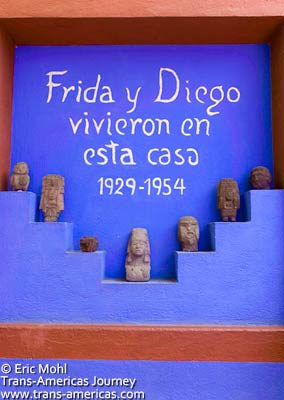 This wall gives you some idea why the other name for the Museo de Frida Kahlo, in the artist’s home in Mexico City, is Casa Azul.

Museo de Frida Kahlo (Casa  Azul) – For every one thing that Frida Kahlo revealed about herself in her art she seems to have hidden 10 more. Walking around the house she lived in, including her bedroom, almost feels like an invasion. The collection includes pieces of Communist propaganda that Kahlo and Rivera did in addition to the work we know and love. Tickets include entry to the Museo Anahuacalli.

Museum of Mexico City – When we were there this small central museum had an awesome retrospective of memorabilia from the world of lucha libre (campy Mexican wrestling) including information about early female lucheras. There was also a great collection of models and photos chronicling some of architect Luis Barragan’s work in the city. 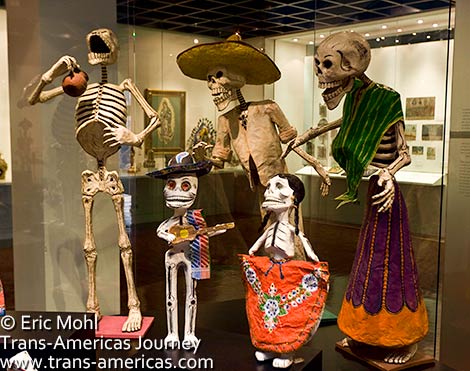 A whimsical modern take on classic catrinas at the Museo Arte Popular in Mexico City.

Museo Arte Popular – Playful takes on classic Mexican art forms and iconography make this museum, near the Alameda, the perfect antidote if you’re suffering from artifact-overdose. The museum gift shop is also full of affordable and adorable gifts as well as collectible investments in silver jewelry or handmade shawls and other traditional fabrics.

Museo Franz Mayer – In addition to the stunning and wide-ranging personal collection of Franz Mayer, when we visited this museum was also exhibiting the 2010 World Press Photo Award winners including awesome work from photojournalists around the world. 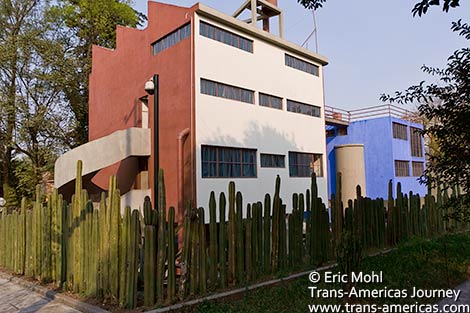 Museo Casa-Estudio Frida Kahlo & Diego Rivera – These connected houses/studios, in a lovely neighborhood of Mexico City, were both home and workplace to the power couple of Mexican contemporary art. It’s full of atmosphere, plus you get to see things like Frida’s bathtub, one of the few Frida moments that feels truly intimate. Diego’s studio is bohemian enough to inspire even the most un-artistic among us. Don’t miss his size 14 shoes left on the floor in the studio.

Museo Nacional de la Estampa – A collection of historically and artistically important pieces of graphic art (estampa means print in Spanish) are housed in a gorgeous building near the Zócalo. We loved the collection of tiny illustrated children’s books. 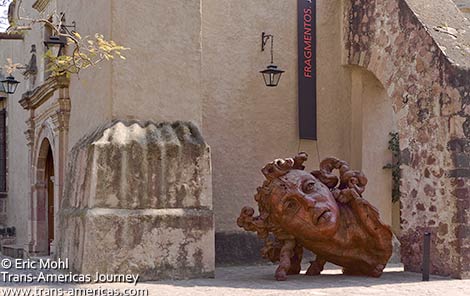 The sculpture-filled grounds of the Museo Dolores Olmedo in Mexico City.

Museo Dolores Olmedo – Dolores Olmeda is said to have been one of Diego Rivera’s lovers, but her eponymous museum and collection reflects a love of Mexico, not just a love of Rivera. The gorgeous and tranquil home and grounds are bursting with pieces from Rivera (and Frida Kahlo) and other classic Mexican artists as well as a pack of  Xoloitzcuintlis, an ancient hairless dogs, and a fabulous and informative collection of top-shelf examples of crafts from around Mexico. For us, this museum provided a better (and certainly much more relaxing) overview of the work of Rivera and Kahlo than any other museum we visited in the city. The gift shop is exquisite. 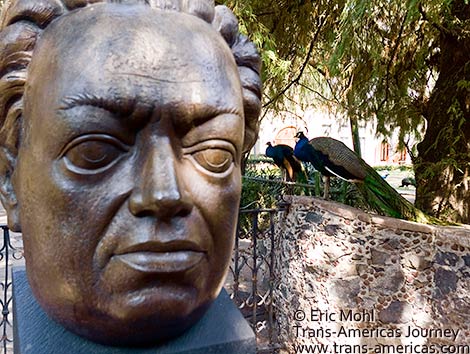 Labortorio Arte de Alameda – Near the city center you’ll find an old church which is now a cutting edge temple to boundary-pushing multi-media art installations that gleefully tackle taboo subjects. It’s by far the most avant-garde museum we visited in Mexico City and it feels like a gallery/art space that would fit right into the Manhattan or Brooklyn art scenes.

Ones that got away…

Though we’ve visited Mexico City three times (for a total of over three weeks), most recently to take part in the Bicentennial celebrations including fireworks, President Felipe Calderón’s Grito, and other highlights, we have still not managed to visit all of the museums we want to see in the city.  Here are a few that got away but which we hope to get to one day.

Though we visited the Guadalupe Basilica, the Museo y Santuario de Nuestra Señora Virgen de Guadalupe was closed by the time we got there.

We never made it out to Museo Anahuacalli, the dramatic pyramid-inspired museum designed by Diego Rivera to house his collection of more than 50,000 pieces of pre-Hispanic art.

We managed to be in Mexico City in between shows at the La Coleccion Jumex. The ubiquitous Mexican juice company has an impressive private art collection and hosts temporary shows that are open to the public in a big space just outside central Mexico City as long as you make a reservation and time your visit to coincide with one of their temporary shows. Otherwise, there’s nothing to see as their private collection really is private. We hear Jumex is planning a new museum in town which will be more easily accessible.

And we didn’t call to make a reservation far enough in advance (they require two weeks notice) to gain entry to Casa Luis Barragán which is famous as much for the architecture as the contents. This UNESCO World Heritage site is the former home of ground-breaking architect Luis Barragán and it’s a must for art and design buffs.

We didn’t make it to the new museum from the world’s richest man (Mexico’s Carlos Slim) for one very good reason: it wasn’t open yet. But we did drive by the construction site and got an eyeful of the enormous mushroom-like shell of the structure, designed by Slim’s son-in-law, in the chi-chi Polanco neighborhood of Mexico City. The $750 million new branch of Slim’s Museo Soumaya, named after his deceased wife, is expected to open in November.

Sunday is free entry day at most museums in Mexico and all citizens, and often even foreigners, don’t have to pay. Expect much larger crowds on Sundays.

And now, the burning question we promised you: Art or commerce?

Post a comment and let us know what you think about the fact that the Mexican government just issued a brand new 500 peso note picturing Diego Rivera on one side and Frida Kahlo on the other. 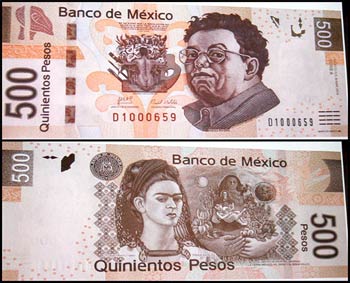