Take in a tequila-fueled parade, visit the enormous Tule tree, and enjoy great horseback riding in the gorgeous Central Valleys near the city of Oaxaca, Mexico as we explore Tlacolula. 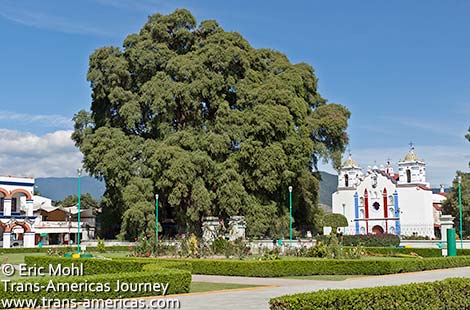 From a distance, the massive Tule tree looks like a mini forest.

About five miles outside the city of Oaxaca is the tiny town of Tule–home to one humongous tree. The Tule Tree is nearly 120 feet (36 meters) in circumference (including its many buttresses), somewhere between 119 and 141 feet (36 to 42 meters) tall (depending on whose measurements you believe), and is said to be the “stoutest” tree in the world.

The Tule tree is so massive that it was originally believed to be multiple trees but DNA testing proved it to be a single tree that’s been slowly growing for between 1,200 and 3,000 years (its exact age has proved elusive). In 2001 the Tule tree was submitted for consideration as a UNESCO World Heritage site. So far, nothing. But never mind. The Tule tree gets plenty of love from the locals who festoon it with Christmas decorations, stuffed animals, clothes, you name it. 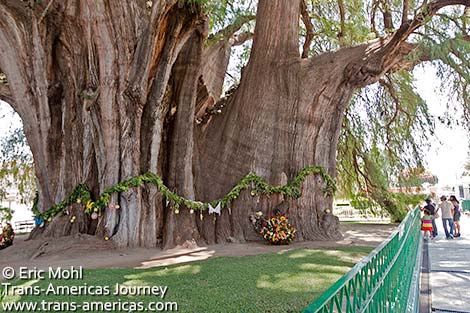 Yes, that’s ONE tree. Note the tiny people on the right for scale

You pass the town of Tule on your way from Oaxaca to the Mitla and Yagul archaeological sites and it makes a pleasant break. We can recommend Restaurante Tule for lunch. The name is not very imaginative, but the beer was cold and the food was good.

Our time in Oaxaca coincided with the annual Feast of the Christ of Tlacolula in the town of Tlacolula for which the valley is named (or vice versa, we’re not sure). The festival (like most in Mexico) is a multi-day affair and we caught the Candelaria parade through town featuring what seemed like every resident dressed up as one religious icon or another. The paraders ambled from church to church, stopping at each to perform a brief devotion. It was like a beer and tequila-fueled connect-the-dots of the town’s most sacred places. 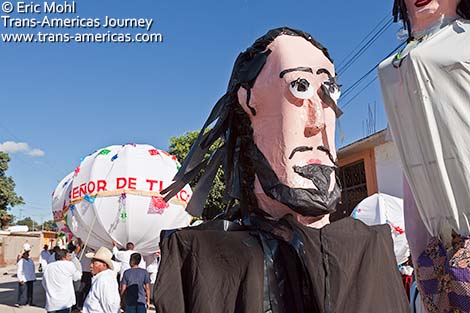 A big-head paper mache figure in the Candelaria parade celebrating the Feast of Christ of Tlacolula. 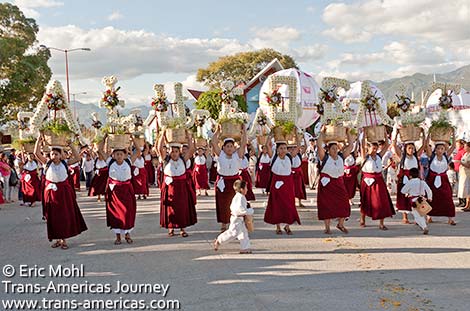 Women parading with floral arrangements on their heads which spell out the town name as part of the Feast of Christ of Tlacolula.

Check out our video, below, to see the paper mache, costumes, and processions of the Candelaria in Tlacoula in action.

Maybe the greatest way to appreciate the beauty of the Tlacolula Valley is on horseback and we know just the people to make it happen. Mary Jane Gagnier used to run Casa Sagrada, a well-known guesthouse and horse ranch in Teotitlán del Valle. For reasons that are neither here nor there, she is no longer associated with Casa Sagrada. But that’s good news because she, along with her partner Bobby Ortiz, has taken the opportunity to create a new and improved riding operation and guesthouse just a few miles away. 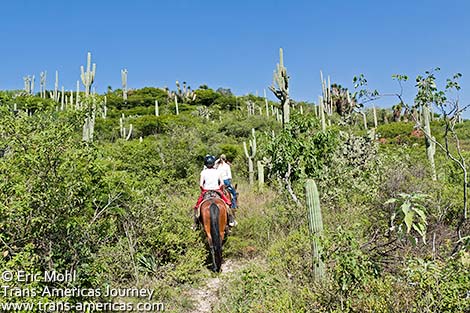 Meandering through the column cactus and the picturesque hillsides of the Tlacoluca Valley during a day of horseback riding with Mary Jane Gagnier and Bobby Ortiz of Rancho Pitaya near Oaxaca city.

It’s called Rancho Pitaya and it’s got three rooms in a traditionally constructed adobe lodge, each with a huge private patio with views of the valley plus hand painted tiles and convenient kitchenettes. Rancho Pitaya also has an open air gourmet kitchen with a chef on hand. This is good because you’ll be working up an appetite out there on the trail.

Both Mary Jane and Bobby are accomplished horsemen and both excel at competitive endurance racing (basically an overland marathon for horse and human). Do not miss a chance to get Bobby talking about his days as a jockey (if he doesn’t bring it up, prod him for the “monkey” story). And don’t say no to one of Mary Jane’s margaritas. Mary Jane is also a published author on Oaxacan culture including the food and the rug weaving which the valley is famous for. 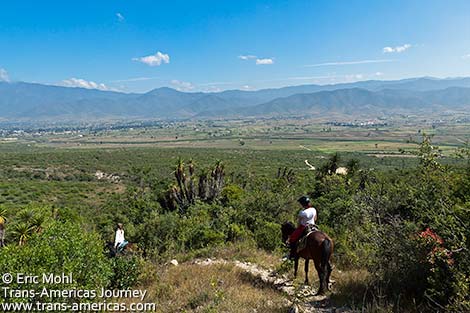 Meandering through the column cactus and the picturesque hillsides of the Tlacolula Valley during a day of horseback riding with Mary Jane Geiger and Bobby Ortiz of Rancho Pitaya near Oaxaca city.

Mary Jane and Bobby (along with chief handler Gregorio Morales) have carefully built a stable of more than 10 horses that are fit and extremely well-trained but not lobotomized. During our all-too-brief outing, Karen rode WMA Zebulon (aka Zeb) and Eric rode Chocolate (a sweet, sweet stallion) and they proved strong, agile, and responsive on trails that wound through stands of column cactus, around and over green hillsides, and through dry canyons. Just a joy to ride, especially in the super-light, super-flexible synthetic endurance saddles Mary Jane and Bobby use and especially in this gorgeous valley.