You Can’t Get There From Here – Toluca Volcano, Mexico

Nevado de Toluca (Toluca Volcano) is the fourth highest mountain in Mexico at 15,223 feet (4,639 meters). But we wouldn’t know anything about that. 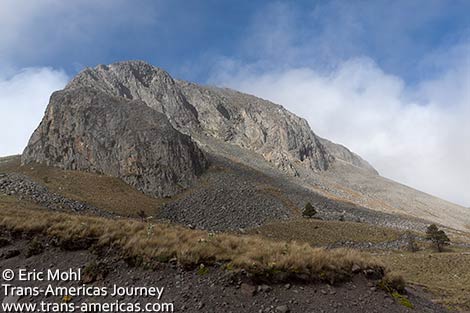 Toluca Volcano peak as seen from the refugio parking area, the closest we got to the top.

Normally, you can drive most of the way up the volcano via an extremely scenic road that heads out of the not-so-scenic town of Toluca. We may be bitter about Toluca since the cops there pulled us over twice in lame attempts at shakedowns which netted them exactly zero.

Anyway, the25 mile (40 km) drive from town is nicely paved and climbs through beautiful forest then an alpine landscape that seems perfectly suited to marmots–scrubby, rocky, windy. The Nevado de Toluca National Park was established in 1936 to protect the area around the volcano but illegal logging, illegal mining, and illegal  pumping of water is still going on in the area. We saw plenty of cattle grazing on supposedly protected land too.

Cars driving to the top are causing damage as well. That’s why the road was closed when we were there, but we didn’t know that until we reached the refugio/parking area where we decided to spend the night. We’d really had our hearts set on driving the truck to the top of Toluca, which would have been its highest elevation on the Journey so far, blowing Pike’s Peak, at 13,650 feet (4,160 meters) out of the water.  However, with the road closed we figured we could at least hike to the top in the morning.

The dorm was full (or so we were told) and it was far too cold to camp so we settled into a musty, dusty, drafty little bungalow that used to have a working  fireplace (probably back when the road was open).

Luckily, we had some leftovers from lunch down in Toluca and sleeping bags warm enough to get through the night. Sadly, morning proved even more windy and cold than the night before so we retreated back down the mountain with no more than fleeting glances of the volanco’s peak through thick clouds in the distance.