We’re still using (and loving) the travel gear we focused on in our previous Travel Gear of the Year posts and Product Reviews, from Wi-Fi extenders to sunscreen to flashlights to travel pillows.

Now it’s time to present the travel gear that proved to be indispensable in 2012. Weirdly, there’s lots of clothing this year. 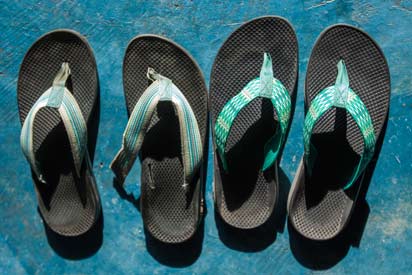 Karen has had her Chaco Flip Eco Tread flip flops on her feet nearly every single day for the past couple of years. A strap finally broke while we were exploring Masaya Volcano in Nicaragua and she had to buy a new pair. That’s when she realized just how fabulous these flip flops are. The durable, non-slip soles (in the foot bed and on the bottom) resist odors and are prefect in the water or on slippery or rocky trails. The soft, pliable, nylon upper straps are easy to clean with a bit of liquid soap and an old toothbrush and they dry fast. And they’re tough as hell. Sure, one pair bit the dust but only after years of daily use. The few days during which Karen had to wear cheap plastic flip flops while she waited for her new Chacos to arrive were hell. Now Eric has a pair too. Another thing we love? The size is clearly and durably printed on the back of the heel of your Chacos which lets you re-order online worry free even without the chance to try them on before buying. 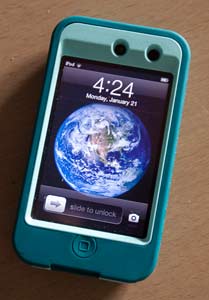 We left on our little road trip the year before the iPhone was introduced. While we did have an early incarnation of a smartphone in the early days of our Journey, it was pretty stupid compared to today’s iOS and Android phones, since “smart” back then meant your phone also had email. It took a while, but 2012 was the year we finally joined the smartphone club…almost. The addition of an iPod Touch 4th generation to our tech arsenal means we have a “smart device” but not a smartphone since the touch isn’t a phone. Still, as long as we have a Wi-Fi signal, we can get email, connect to the web and use any iPhone app without having to drag out our computers. We have not been immune to the allure of all of those tasty iPod accessories either and our new gadget is now housed in an Otterbox Defender Case. These colorful and beefy case have three layers of protection including a clear panel over the screen. While we have no plans to toss around our new iPod or drop it in the bathtub the rugged, smart design of this case does inspire confidence that it would survive such shenanigans. We only have one criticism: in order to mount our iPod onto speakers we have to remove it from the Otterbox case entirely–no easy feat. 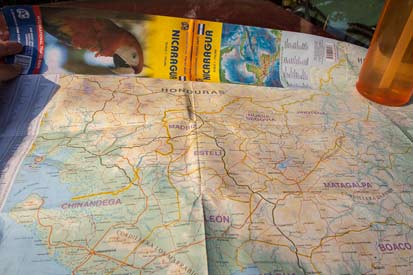 ITMB maps will get you there, and amuse you.

The extremely well-traveled folks at the award-winning International Travel Maps and Books (ITMB) are fanatics. They have a team of cartographers and the itch to explore and their combo of artistry, OCD and travel passion has resulted in travel-centric maps covering just about anywhere you want to go (they currently publish more than 425 different maps). We began relying on ITMB maps in Nicaragua and Costa Rica and will stick with them all the way to Tierra del Fuego. The company spent 22 years mapping South America, so we think we’re in pretty good hands.

Just when you thought the sweat-wicking/smell-resisting/SPF-giving/insect-repelling materials used to make outdoor clothing couldn’t get any smarter, along comes Sol Cool, a fabric which contains Xylitol, a scary-sounding name for something that occurs naturally in birch trees. When added to clothing, Xylitol cools you off by up to five degrees when the fabric comes into contact with moisture (like sweat), which is then wicked away. The Sol Cool fabric also gives you SPF 50+ protection. ExOfficio is using Sol Cool in a line of clothes for men and women. Karen is practically living in her Sol Cool Sleeveless Sun Dress and Eric swears he feels cooler every time he puts on his Sol Cool t-shirt. 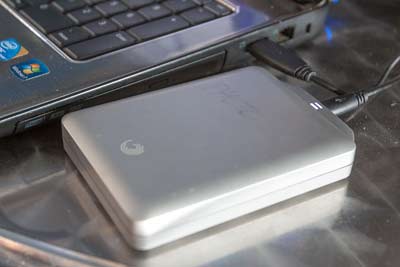 Just one of our Seagat drives.

Over the past six years of our Trans-Americas Journey Eric has taken more than 80,000 photos which take up nearly 1TB of space. That’s a lot of vital data to keep backed up and safe in dusty, bumpy,hot and humid conditions on the road. Through the years we’ve lived through the nightmare of having drives from LaCie, Western Ditigal and Maxtor fail on us at one point or another. So, in 2012, we made the switch to Seagate drives, including their smaller size, higher capacity and (so far) tougher portable drives (like the one above in use in Panama). Before switching to these drives Eric had to split his photo library between two 500MB drives—not exactly convenient or organized. Now his entire photo library fits on one Seagate FreeAgent GoFlex 1TB drive. (Note that this line was recently updated to the BackupPlus Portable l line.) 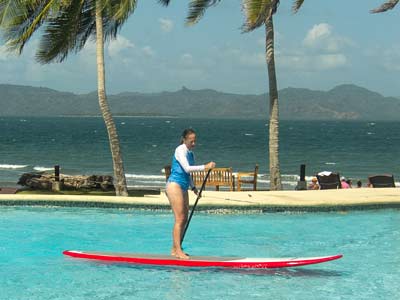 Karen SUPping in her UV Skinz in Panama.

UV Skinz made it into our travel arsenal literally in the final days of 2012 but we’re already sure we’ll be swearing these sun protection shirts every time we’re in the sun for extended periods of time from here on out. With styles cut specifically for men, women and children the fit is good–not too clingy and not too baggy. And despite a fairly heavy feel to the elastene fabric our UV Skinz aren’t too hot and they dry quickly. How do we know? We took our new UV Skinz for a virgin run during a stay at Nitro City Panama Action Sports Resort. This newly-opened place less than two hours from Panama City, Panama is owned by Travis Pastrana, a motocross/X-Games/Red Bull extreme athlete and stunt man turned Nascar driver along with his equally amped-up partners. They all have one goal: give guests a taste of adrenaline and a luxe place to rest and recover after the rush. Nitro City has a top-shelf activities staff (many of them champs in their sports) offering kite boarding, wake boarding, stand up paddle boarding, dirt bike riding, skate boarding and more to newbies and budding pros alike. We fell into the former category as we enjoyed wake boarding and stand up paddle boarding at Nitro City, always wearing our UV Skinz. After four days we were sunburn free. We also like that the seams are flat so UV Skinz don’t rub under life vests or SCUBA equipment or other gear and the fabric is impregnated with SPF 50 protection and it’s chlorine resistant.

We’re not going to go into it. Suffice to say that Karen’s right hip has been in open revolt ever since she hiked up Santiaguito Volcano in Guatemala carrying a too-heavy pack two years ago. We’ve been carrying Leki trekking poles with us in the truck since day one of our Trans-Americas Journey back in 2006 but in 2012 they become a necessary hiking accessory for Karen providing balance and support.