Every October, the city of Ibarra, Ecuador celebrates its founding with a day-long festival called the Caceria del Zorro which involves costumed Zorro impersonators and hundreds of horses and riders in hot pursuit over hill and dale. They’ve been doing this for more than 45 years and we recently joined thousands of other spectators on the dusty sidelines to see what this quirky, white-knuckle equestrian event is all about. 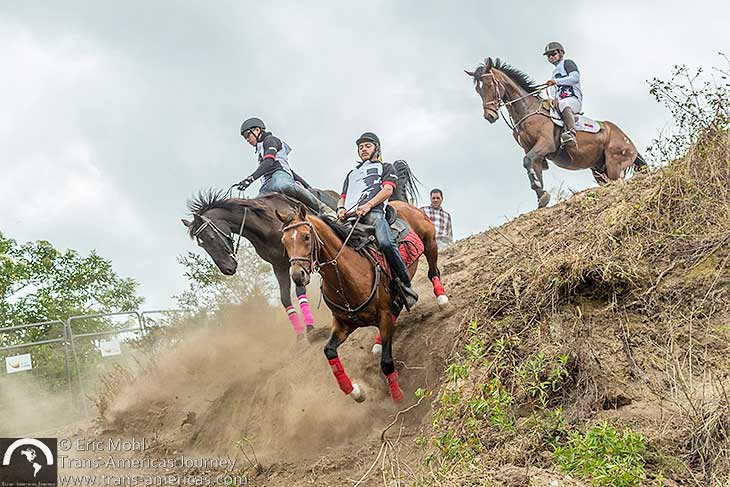 Riders in the annual Caceria del Zorro in Ibarra, Ecuador tackle one of three extreme drops along the route.

The Caceria del Zorro in Ibarra is like a fox hunt, but instead of hedges you’ve got near vertical drops down mountainsides and instead of a fox you’ve got a rider dressed as Zorro with a fake fox tail. Why? Well, the event mimics and honors the deer hunts which used to take place in this part of Ecuador. Over time, the deer became a fox and since Zorro is the Spanish word for fox (and the masked hero was known to be cunning like a fox), they ended up with Zorro. Just go with it. 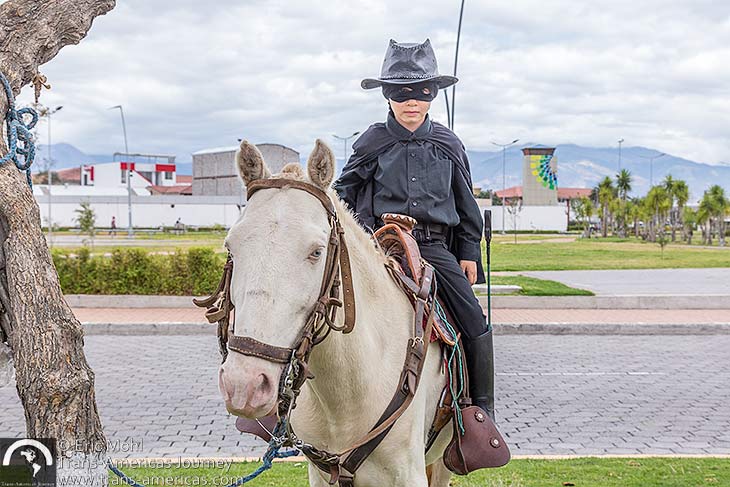 We call him “Zorrito” and he was our favorite Zorro at the event for obvious reasons.

Hundreds of riders, including women and children, take part. They must wear helmets and many wear actual riding helmets but some make do with ill-fitting bike helmets or motorcycle helmets. There aren’t many other rules. 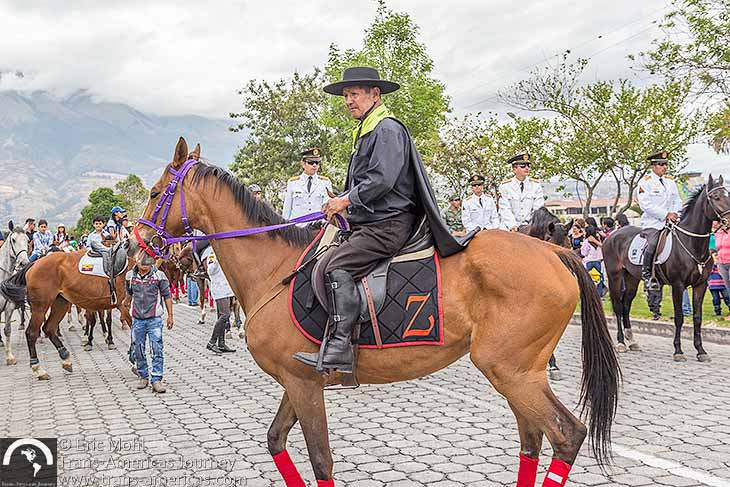 One of the Zorros at the Caceria del Zorro in Ibarra, Ecuador.

The event begins with a horse parade through town then up to the angel statue on top of a hill above Ibarra. The range of horses present is striking, everything from obviously pampered and well-bred beauties to some that looked like they were probably plowing a field yesterday. 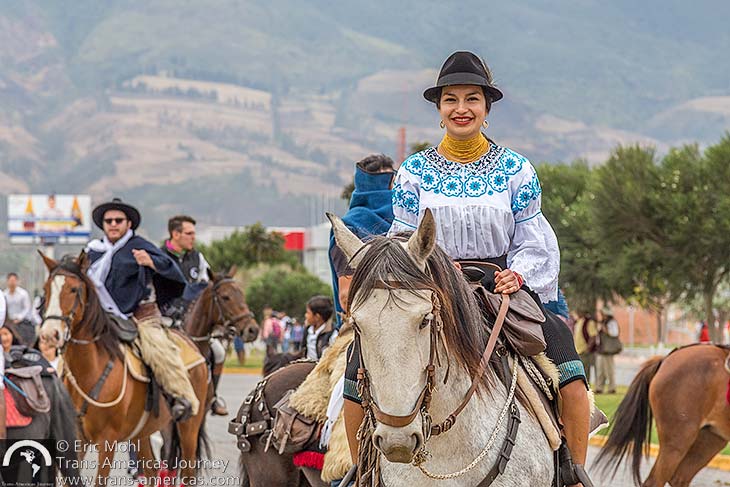 A traditionally-dressed rider with a group of chagras at the Caceria del Zorro in Ibarra, Ecuador.

Members of fancy riding clubs come out in force, the mounted divisions of the military and police are present, and traditionally dressed local cowboys (called chagras) also make the scene. Even local beauty queens get in on the event. 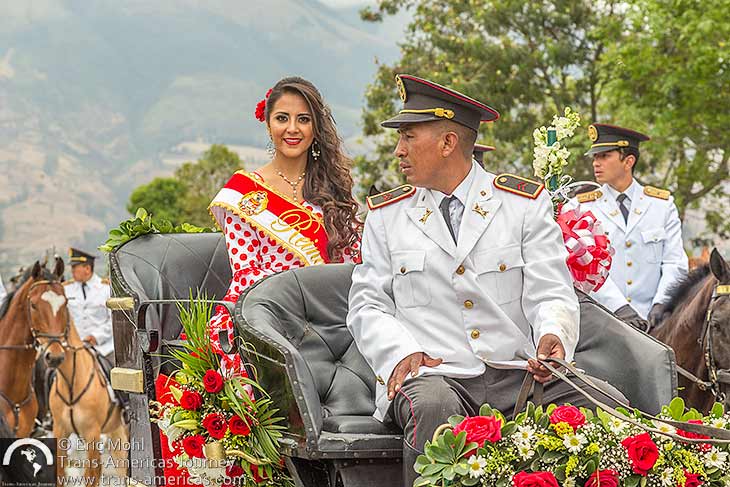 A local beauty queen gets a lift during the Caceria del Zorro parade.

A leap of faith on horseback

The first part of the course includes threes precipitous drops called piñearoles which are built at 45-degree angles and drop between 6.5 and 20 feet. Many riders fall off as balking horses staring down incredibly steep dirt hillsides put on the brakes. Dust flies and many riders holler “Viva Ibarra!” as they go over the piñearoles. 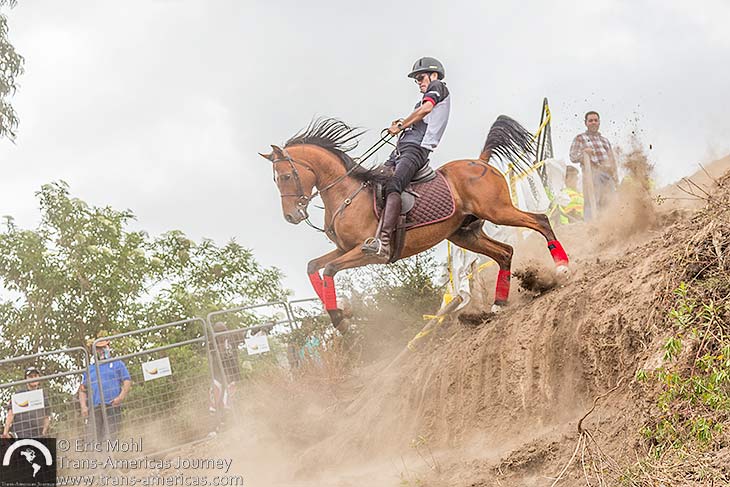 A rider tries to stay put during one of the three extreme drops in the Caceria del Zorro route. 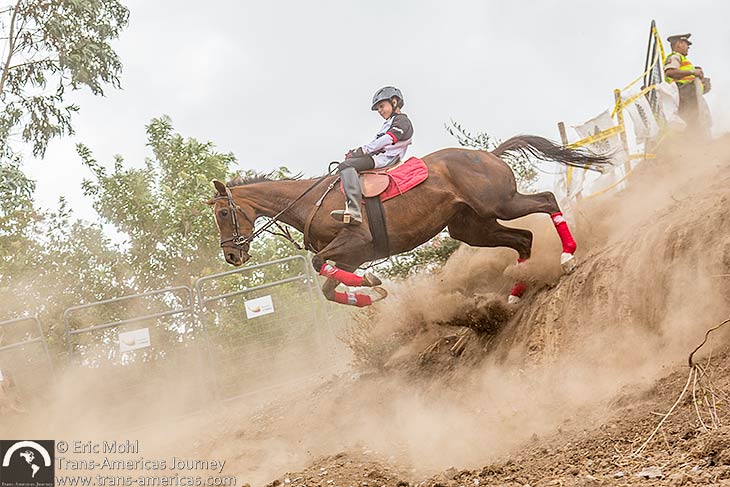 Even kids take part in the Caceria del Zorro.

The parade and the piñearoles take hours to complete and the horses don’t mass at the lakeside race track for the second part of the course until early afternoon. There the horses are unsaddled and horses and riders get a much-needed break and a chance to eat and drink. 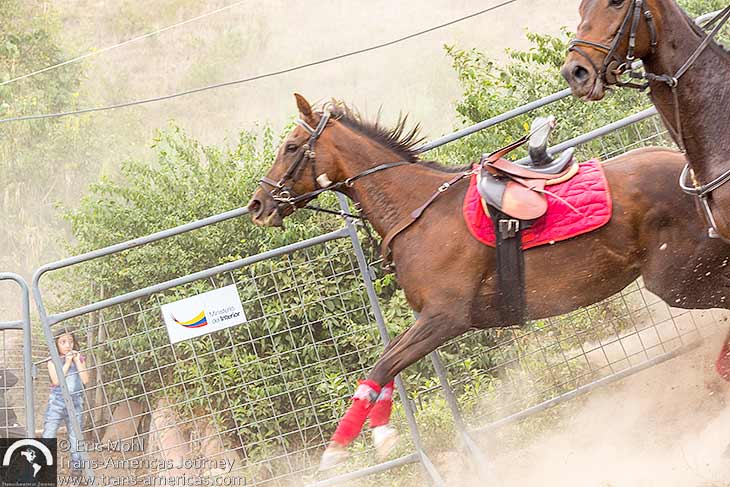 Spills and falls are common during the Caceria del Zorro 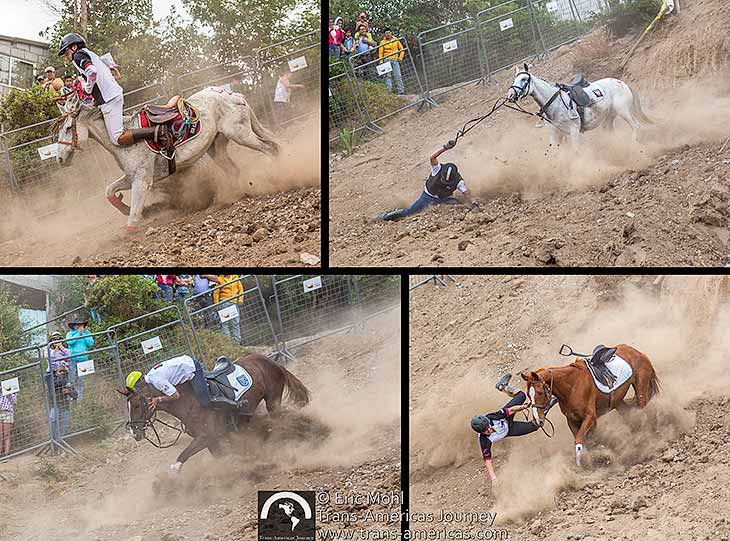 There are many ways to end up on the ground during the Caceria cel Zorro and none of them are elegant.

In recent years veterinarians have been called in to monitor the well-being of the horses during official checks during the event. Two vets that we spoke to said they had seen no major problems with the horses, but they said that in recent years “doping” with caffeine had taken place which leads to heart problems in some horses. And horses have had to be “sacrificed” in past years because of broken legs or other untreatable injuries. 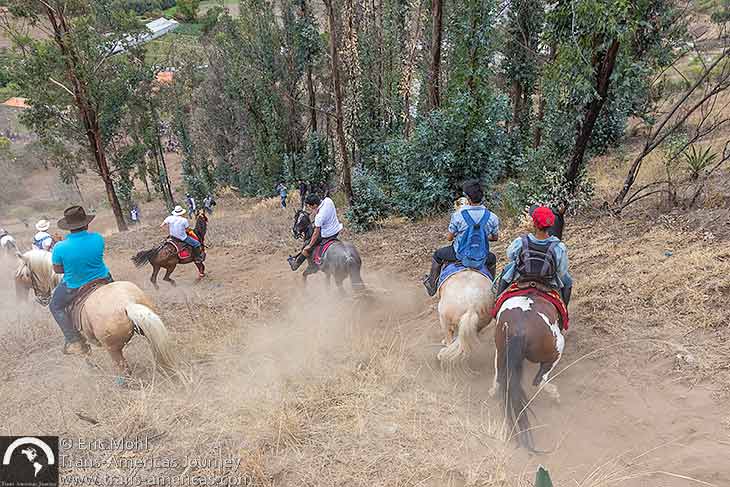 Navigating a steep descent during the Caceria del Zorro.

But they’re not done yet…

The Caceria del Zorro ends with seven races in different classes starting with the youngest riders and culminating with the experienced pros. Each race is lead by the winner from last year’s race in that class who is now dressed as Zorro. 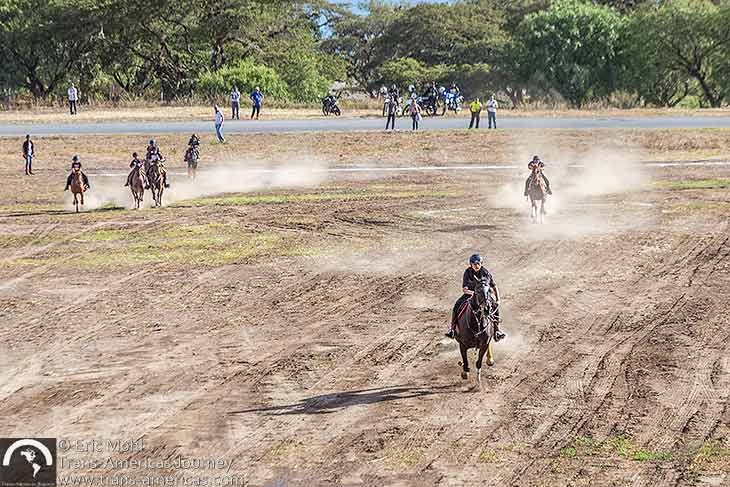 The beginning of one of the seven races that take place during the second half of the Caceria del Zorro. Note the Zorro rider in the front with racers in hot pursuit.

The very first Zorro was Mr. Ramiro Mie who was chosen for his riding skills, wore a fox tail on his back, and scattered paper behind him as he galloped to leave a trail for his pursuers. The scattered paper part has been dropped, but the rest is pretty much the same. Our favorite Zorro was a pint-sized rider we dubbed “Zorrito”. 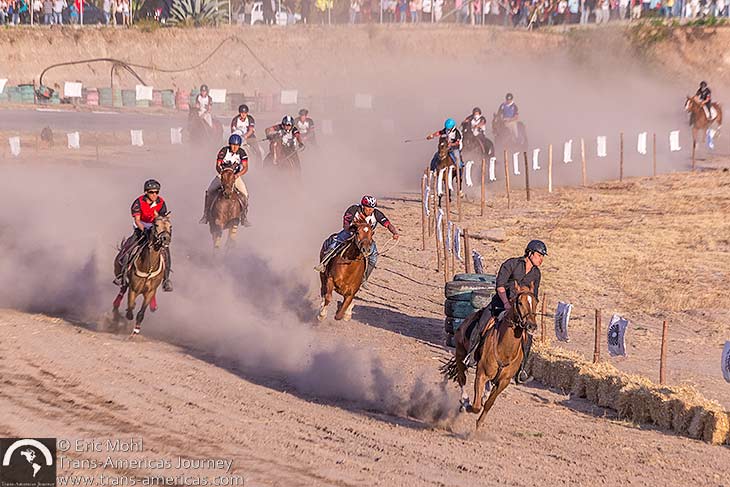 Racers kick up dust clouds as they pursue the Zorro rider in the lead.

Each Zorro gets a 260 foot (80 meter) head start, then the field of riders takes off in an attempt to catch the Zorro and tear off the fake fox tail that’s still worn as part of the costume. We watched the entire day of racing and only saw this successfully done twice. 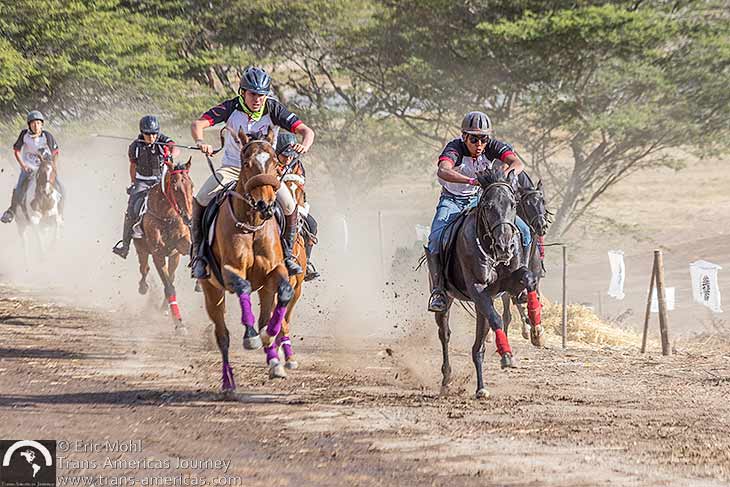 Racers on the track during the Caceria del Zorro in Ecuador.

The 1.8 mile (3 km) dirt race course is located near Yahuarcocha Lagoon and it’s long and winding with many gentle ups and downs. Most horses and riders reached the finish line clearly exhausted. Some didn’t finish at all. 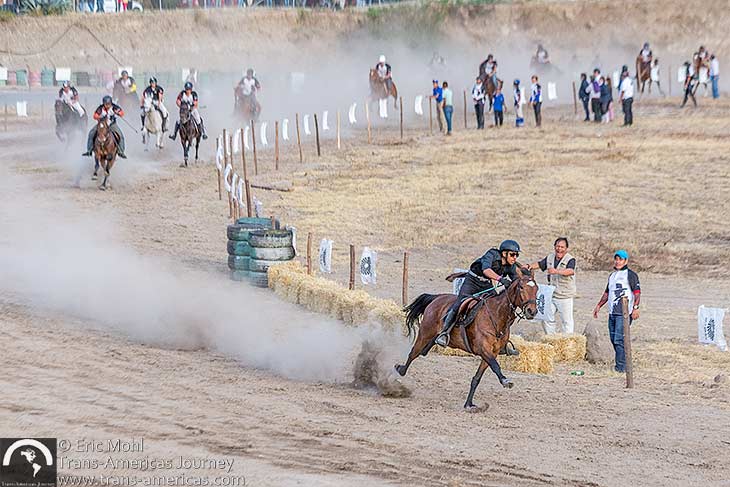 Zorro extends his lead during one of the racetrack races. You can see the fake fox tail flying out behind him.

One rider got to the finish line first, started fist pumping, then toppled over the front of his horse and landed on his back. He got up, but an ambulance took him away. Winners get bragging rights, a bit of money, and the honor of being Zorro next year. 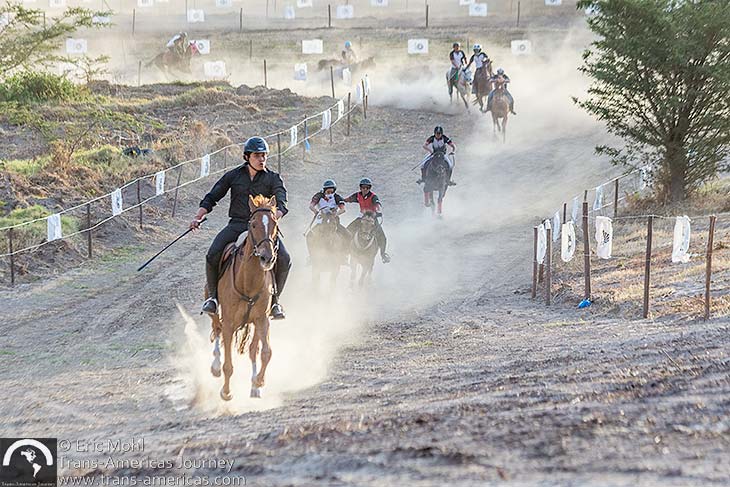 We were so fascinated by the event that we wrote about the Caceria del Zorro for Afar. And here’s a short documentary (in Spanish) about the event.

Read more about travel in Ecuador