The White Continent or Bust – Antarctica

We just got back from an 11-day trip through Antarctica, aka the white continent, on the M/V Antarctic Dream. Here are some just-back highlights from this trip of a lifetime including penguins, icebergs whales, and humans. 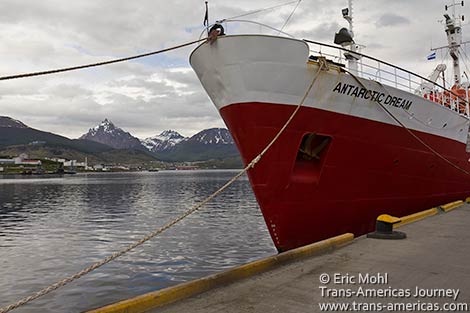 Our home for 11 days: the M/V Antarctic Dream

Followers of our Journey know that we’ve been anticipating our Antarctic adventure since August and the planet’s most remote continent totally lived up the hype and went well beyond our expectations. Take a look. 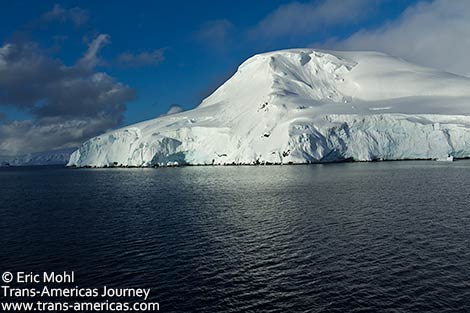 And that’s not even a BIG iceberg by Antarctic standards.

The penguins of Antarctica

Penguins are even cuter than you think and we saw thousands of them–mainly gentoo and chinstraps. 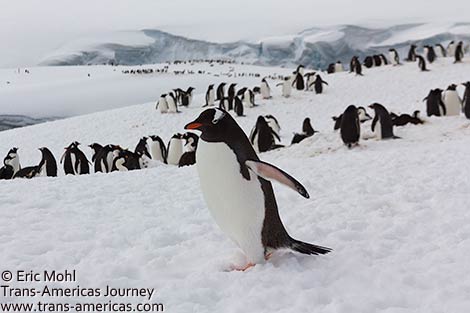 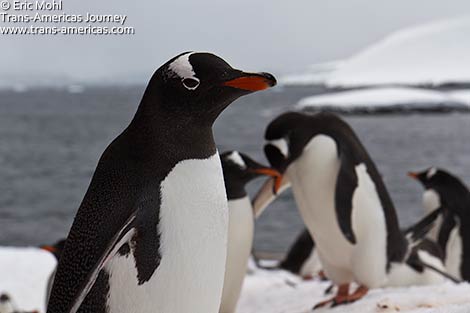 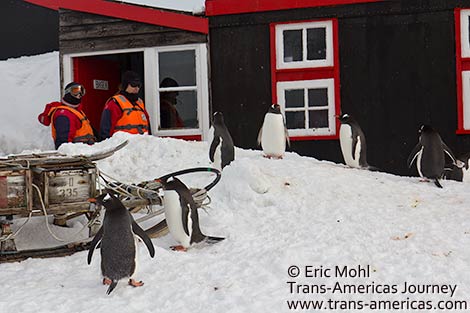 We also got a rare and exciting sighting of a lone emperor penguin (the four foot tall stars of March of the Penguins) on an iceberg far, far from its usual home. 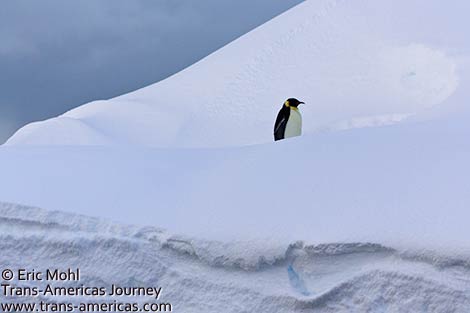 A lost and lonely emperor penguin adrift on an iceberg.

The icebergs of Antarctica

Icebergs, which can reach more than 10 miles (16 km) in length, were stars of the trip as well. They came in intricate wind-swept shapes, impossible blue colors and the ice is ultra-clear, like glass. We know because Karen braved the frigid water and reached in to retrieve a small chunk to enjoy in an on-board cocktail.

The tip of the iceberg in Antarctica.

The whales of Antarctica

We did not put our hands in the water during a zodiac excursion during which our inflatable boat was surrounded by a pod of seven killer whales. We also sighted minke whales on a couple of occasions and crabeater seals and Weddell seals also made appearances. 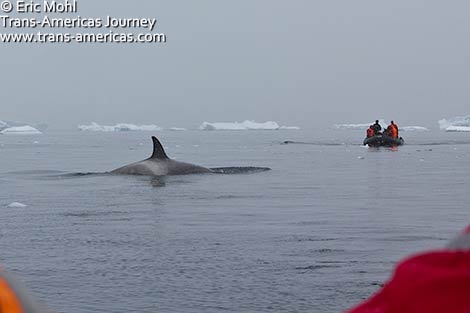 Our zodiacs were surrounded by pod of killer whales during one shore excursion in Antarctica. 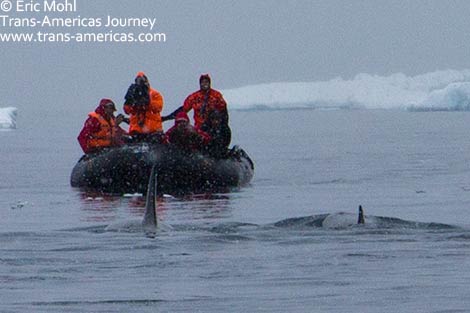 That killer whale dorsal fin is at least three feet tall and its heading straight for our shipmates.

The humans of Antarctica

There were also many human highlights on the ship including “Ernie Shack, Adventure Addict”, the captain’s wife, the crazy defense attorney from New York who brought along her Snoopy Snowcone maker, el Capitan Guapo, The Glen (who went skinny dipping one day and performed a necessarily brief yet impressive re-enactment of the loping way penguins swim), our fearless leader Pablo and, of course, Maxi. Oh, and Jacques Cousteau’s granddaughter Céline Cousteau was on the ship with a film crew working on a series of TV show about the waters around Chile. 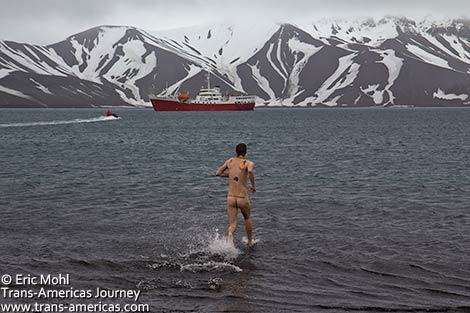 Our shipmate The Glen (who has a tattoo of the Antarctic continent on his back) went skinny dipping in the frigid Antarctic waters off Deception Island.

To learn more about travel to Antarctica, check out the feature we wrote for the Dallas Morning News including tips for making the most of your trip to Antarctica and our feature for the Minneapolis Star-Tribune about all of the onboard adventures you’ll have.

All travelers to Antarctica are required to have a medical evacuation insurance policy just in case something awful happens out there in the middle of nowhere. On Call International has covered us on our Trans-Americas Journey for more than a year now so we didn’t have to worry about arranging coverage (or dealing with a catastrophe). Because we were already covered we could focus on just being excited about this trip of a lifetime.

We weren’t taking any chances with the notoriously rough waters of the Drake Passage where the Atlantic and Pacific Oceans crash up against each other, so we went the prescription route and used a Scopolamine patch. But we also armed ourselves with homeopathic remedies including a pair of Sea Bands. These simple, cheap, reusable devices–picture an old-school wrist sweatband like McEnroe used to wear with a plastic ball embedded in one side–stave off nausea caused by motion sickness (or morning sickness) by applying pressure to a specific point in your wrist. The combo worked and we made it through the passage without getting seasick. 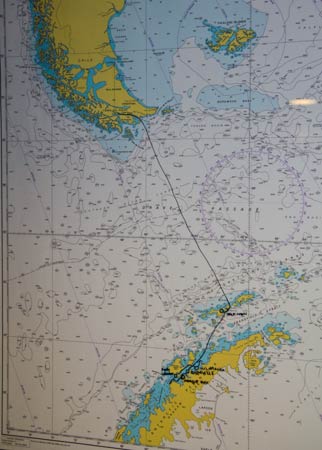 Our route from Ushuaia, Argentina at the bottom of South America, across the Drake Passage and on to the Antarctic Peninsula.

No, we didn’t drive to Antarctica. Our thanks to LATAM Airlines, which flew  us to Ushuaia and back and to the M/V Antarctic Dream which took us from there.

Here’s more about travel to Antarctica