It has (happily) been many years since we were last on a big commercial airplane (the Trans-Americas Journey is, after all, a road trip). However, we had to leave our truck behind and get on a plane in order to board the Antarctic Dream boat in Ushuaia at the southernmost tip of Argentina to keep our date with penguins and icebergs in Antarctica. 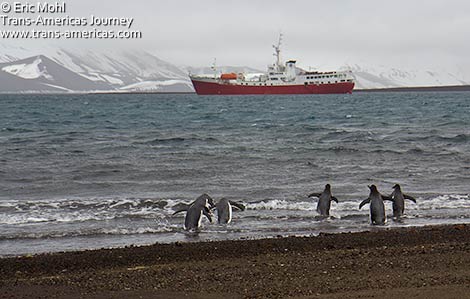 The penguins were waiting so we had to leave the truck behind, get on a plane, then get on a boat.

Getting to Antarctica, the most remote continent in the world

Getting our road trip onto a boat to Antarctica required getting ourselves onto a LATAM Airlines flight for around 15 hours of economy class air travel. But first we had to take off our shoes and obsessively measure all carry-on liquids (it’s amazing how miniscule three ounces is). Then we got patted down and filed past TSA employees and various beeping and blinking gadgets all working at a snail’s pace.

However, once we finally got on the LATAM airplane we got some pleasant surprises even in economy class. The first happy discovery was A/C power outlets at each and every seat. The plane also had an incredibly diverse selection of dozens of movies and hundreds of albums (plus games) on the easy to use personal in-flight entertainment system.

The (clean) bathrooms had nice soap and hand lotion. We were not only served a total of three hot meals during our continent-crossing flight but there was also free white or red wine or whiskey in addition to the usual roster of non-alcoholic beverages. Yes, in economy class.

To top it off, LATAM’s in-flight magazine was actually readable. The only thing missing was Wi-Fi. We’re almost looking forward to our 15 hour economy class flight back when it’s time to return to our truck after our Antarctic adventure.

Here’s more about travel in Antarctica