You Can’t Miss It – Houma, Louisiana

Day 27 of our Journey

We’re going to be honest. Things have not been going as smoothly as they usually do when we travel. So far we’ve resisted the urge to whine and complain and bore you with a long list of mishaps (and we’re not going to do that now either), but it’s beginning to feel like we’re driving under a dark cloud of misfortune and today was no better. After leaving Grand Isle, we headed up toward prime Atchafalaya swampland near Houma, Louisiana in search of a boat swamp tour. This should not be a challenge since southern Louisiana is lousy with folks with a boat who want to show you their swamp. The hard part, it turns out, is finding their docks. 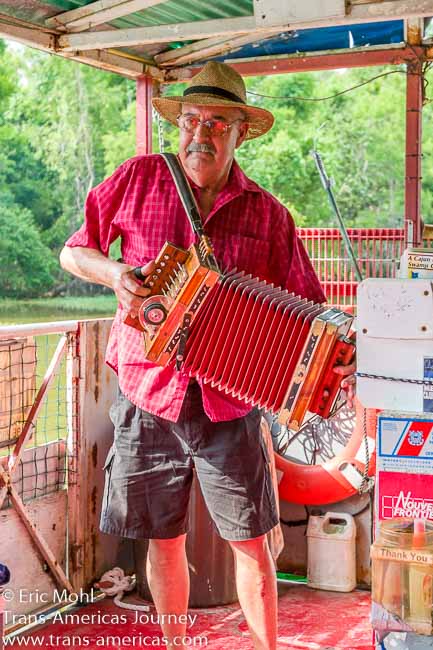 Cajun Man doing his schtick during his swamp tour.

After driving around in circles for about an hour we ended up 30 miles (50 km) or so from where we were supposed to be. Demoralized and hungry, we gave up and headed to nearby Morgan City where we managed to find Swamp Jack only to be told that he does not have eight customers and he will not take his boat out for less than eight people. He blamed the price of fuel, but we blamed that dark cloud we mentioned before.

But our hearts were set on a swamp tour, so we headed back to Houma and manaaged to find the dock where A Cajun Man’s Swamp Cruise departs from. We were just in time to join the 3 pm tour which turned out to be a mixed blessing. Yes, we were on a swamp tour, but Cajun Man’s Swam Cruise—like the overwhelming majority of the swamp tour guides and operators in the area—was more about spectacle than Mother Nature. 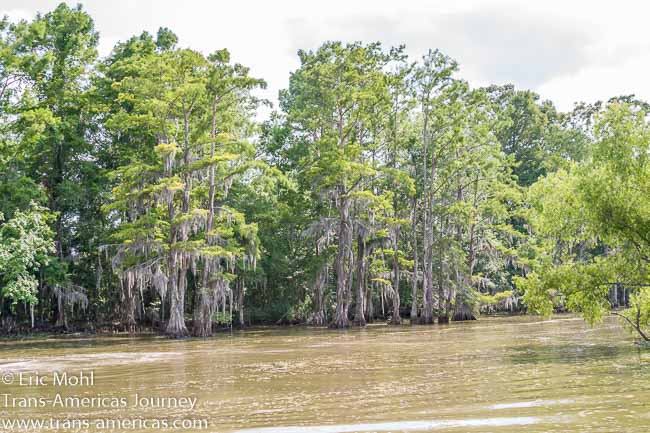 Born with the name Ron Guidry, Cajun Man (who said he really is Cajun and we have no reason to doubt him) has been doing basically the same schtick for years (including during his appearances on major TV networks and in a Kia commercial). It involves one part cantankerousness, one part homemade Cajun accordion playing, and one part stupid animal tricks. 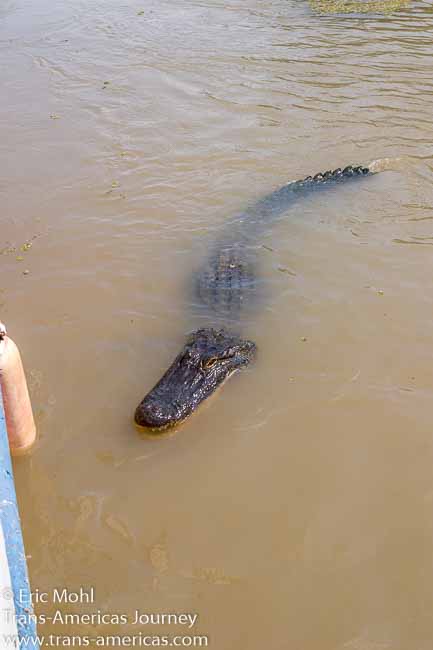 One of Cajun Man’s many gator friends (we think it’s stumpy).

All but the ten or so alligators we saw during our two hour swamp tour were lured to boat with a bit of raw meat and Cajun Man’s strange guttural clucking (a crew of visiting Japanese chefs on the boat with us immediately and inexplicably started emulating the cluck—and while we’re on the subject, what were a bunch of Japanese chefs doing in southern Louisiana learning how to cook Cajun food anyway?).

“Tourists just want to see alligators,” Cajun Man said wearily. And he wasn’t wrong. But we usually like to earn our animal sightings through perseverance and good old fashioned luck, not chicken necks. We did learn one thing: the number of inches from an alligator’s nose to his eyes is the number of feet long he is. Or so Cajun Man said. 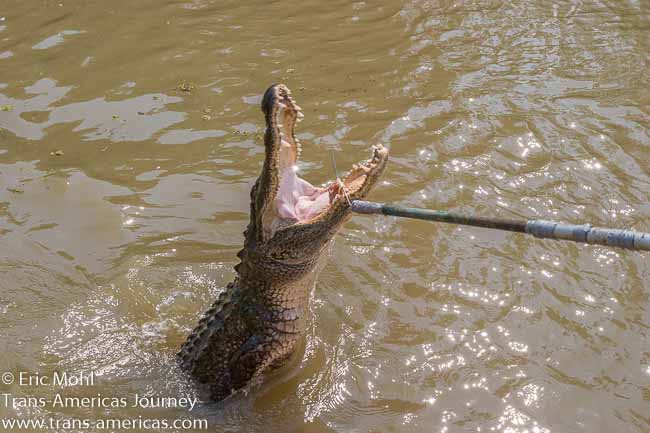 Gators getting a chicken treat after approaching our boat, on cue, during the Cajun Man’s Swamp Cruise.

It all ended up feeling a bit like a floating circus but we were assured by a local environmentalist that not all swamp tours are like that and she recommended Dean Wilson of Last Wilderness Swamp Tours if you’re looking for a tour that’s heavy on education and observation and light on three ring shenanigans.

An etiquette lesson in Little Iberia

Dinner that night in Little Iberia was every bit as entertaining as our swamp tour, which was obvious the moment we walk into the smoke-choked bar/dining room of the Guiding Star restaurant. Boiled seafood is what they do so that’s what we ate: a mix of boiled crabs and boiled crawfish made extra succulent with the addition of the dregs from the nearby Tabasco plant into the cooking water. Even the accompanying corn on the cob and boiled red potatoes were cooked in the spicy brew and it was a delicious revelation.

Just as we were getting the hang of how to best extract the good stuff from a crawfish or a crab using your bare hands (messy, but effective), an older woman walked in alone. She was wearing a lavender pantsuit and was clearly known to the staff. She sat at what we imagine to be “her” table then put on a pair of surgical gloves before digging into her own heaping tray of boiled crawfish. We were impressed.