Frankly My Dear, We Do Give a Damn – Baton Rogue to Grand Isle, Louisiana

Day 26 of our Journey

Even if you were born in Baton Rogue, Louisiana and you honestly think you know everything there is to do or see in the area, we recommend you pay a visit to the Baton Rogue tourism office for a cheery dose of helpful hints and insights from the two fonts of knowledge who staff the place. What one of them doesn’t know (precious little), the other fills in and you will walk away a better traveler. 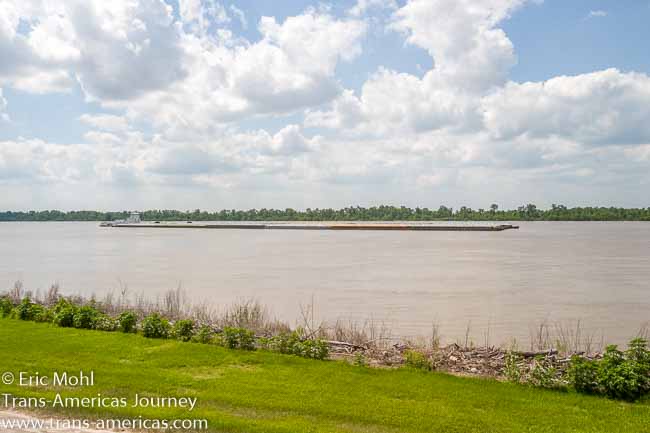 A barge moving down the mighty Mississippi.

“If you want my opinion, and it’s only my opinion,” says the tourism booth employee who was born in New Jersey but has clearly embraced her new Southern locale, “skip Oak Alley plantation and visit Nottoway Plantation instead.” And just like that we blew off the poster child for Louisiana cotton plantations. We’re just that impressionable.

Nottoway Plantation Resort is located about twenty minutes out of Baton Rogue just a short distance down the historic and scenic River Road that runs along the levees holding back the Mississippi River. As we entered the house via a double-sided curved staircase (one for ladies and one for men so they wouldn’t see the ladies’ ankles as they lifted their skirts to walk) we did feel a bit like Scarlet O’Hara and Rhett Butler. Then the tour guide told our group that the curtains in the men’s smoking room were modeled on the ones Scarlet turned into a dress in Gone With The Wind. 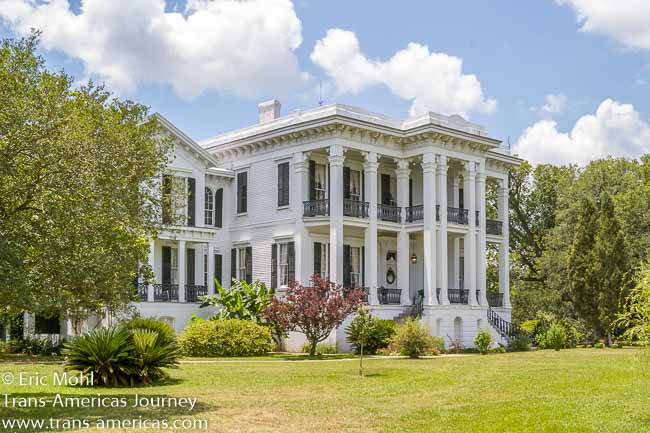 What sounds like a movie but is actually real life is the tale of how Nottoway—owned by a man who kept more than his share of slaves and who had sons who were fighting for the South—escaped being looted and burned to the ground during the Civil War like so many other plantations.

Seems the owner had hosted a certain high ranking Union soldier before the war and, as his marauding troops descended on the place, he remembered how well he had been treated and held his soldiers back. After getting a vow of loyalty from the lady of the house (read into that what you will), he promised Nottoway would be spared. And it was, except for the tennis ball size piece of shrapnel that recently fell out of one of the pillars along the front porch. 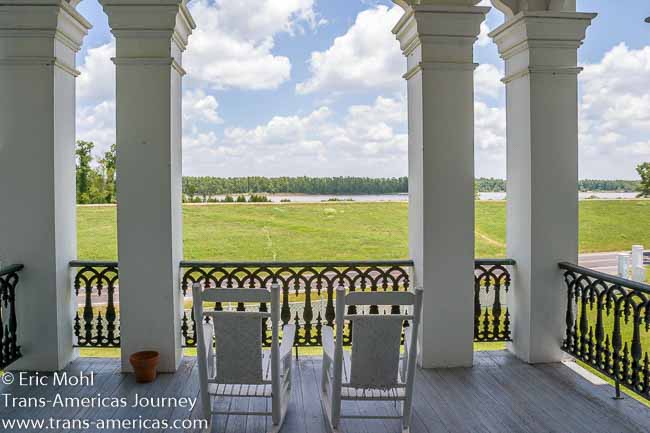 The front porch, overlooking the Mississippi River, at Nottoway Plantation.

On a lighter note….Nottoway Plantation is also a resort and you can spend the night here in modernized rooms. Even if you stay in the rooms at the back by the pool you get a key to the plantation house and you can use it at will after 5 pm. 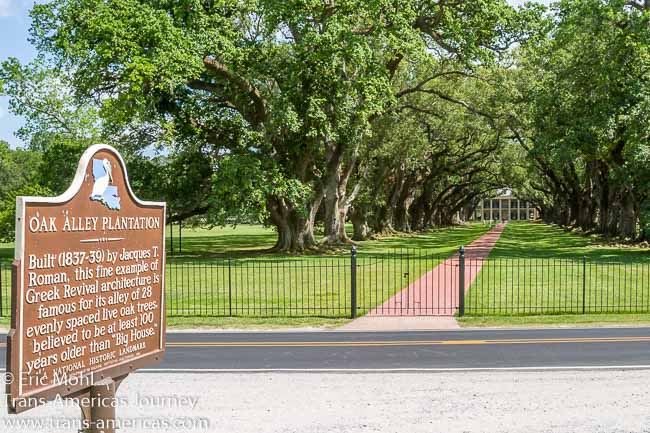 A little further down the road we drove by Oak Alley plantation, all snooty like a prom queen or, yes, Scarlet O’Hara. We took a picture from on top of the levee across the road and then continued on.

Even though (or maybe because) we knew it would mean seeing another example of hurricane Katrina aftermath, we headed for the very tip of Louisiana’s Highway 1 where it dead ends at Grand Isle on the Gulf. We phoned ahead to make sure the Sandpiper Shores Motel was open for business, then we stocked up on grilling supplies.

It was a scenic, peaceful drive through small inland towns that were not hit by the hurricane at all until we reached Leeville a few miles from Grand Isle. There Katrina destruction reared its ugly head again. 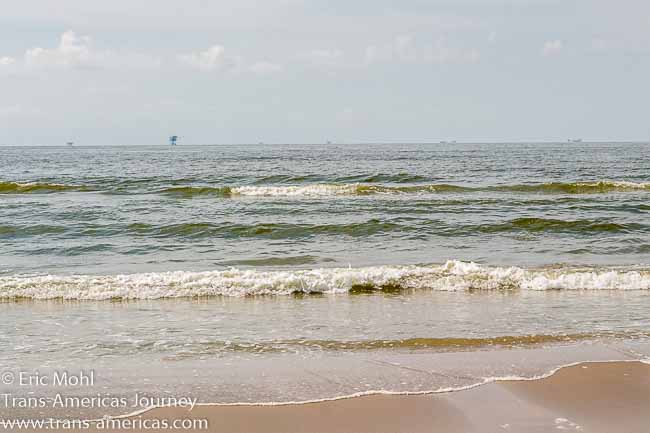 Oil platforms (we counted more than 20) in the Gulf of Mexico off Grand Isle.

We are pleasantly surprised when we rolled down the beachy, sleepy main drag of Grand Isle. Clearly, a tremendous cleanup and rebuilding effort on the part of the city and its business/home/vacation homeowners had been made. The majority of the buildings had been rebuilt and looked good as new, and the few properties that had not been restored had, at least, been cleaned up. We especially loved the facing homes that are called Blue Fish and Red Fish, each featuring a rendering of the Seuss characters of the same name.

At the Sandpiper Shores Motel we headed straight for their bar-b-que to get dinner going. The vicious mosquitoes had their fill of us as we cooked, then we headed to our room and open the last bottle of wine we brought from home, a 1999 Petit Verdot from Husch Vineyards which was bottled especially for wine club members who attended their annual vineyard picnic event that year. We’d been saving it “for a special occasion” ever since. The wine was delicious and makes our “special occasion” in Grand Isle even more so.