San Cristóbal de las Casas is fascinating, but travelers need to get out of town and visit nearby Tzotzil and Tzeltal Mayan villages in Chiapas, including the famous San Juan Chamula church, where their living culture plays out in booze, blouses, and burials. 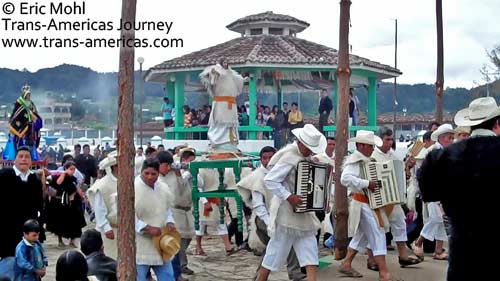 Carried away inside the San Juan Chamula church

The most-visited of the neighboring villages has to be the Tzotzil town of San Juan Chamula just a few miles from San Cristóbal and home to a famous church. We arrived early on a Sunday (market day) and our truck was immediately swarmed by kids and not in a good way. For the first time in Mexico we felt uneasy about leaving our truck in the hands of these kids. 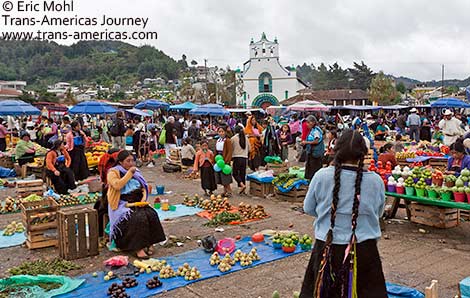 But we had no choice, so off we went to pay the 20 peso (US$1) per person entrance fee that’s required for foreigners to enter the San Juan Chamula church. We also get the very clear message about the town’s rules against taking pictures of town officials or anything inside the church. In case you didn’t understand the rules the first time, local men wearing white wool tunics and carrying big sticks were walking around confiscating film and erasing digital photo cards whenever they caught someone taking a shot. 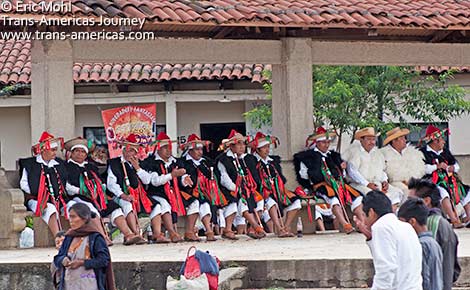 Fair enough. Certainly, a town (especially an autonomous one like Chamula) has the right to earn a little something off the tourists they attract and the locals absolutely have the right to lay out (and enforce) some ground rules.

What bothered us was the resentment we felt in Chamula. It was clear that some members of the community have had it up to here with tourists. After witnessing the skimpy clothing and photo-snapping behavior of a few of the folks getting out of mini-vans we can understand that feeling. But if you really can’t stand us why take our money and fake welcome us in? You simply can’t have it both ways (snatch the cash then wish we’d never come), no matter how cool your church is. And the church in Chamula is damn cool. 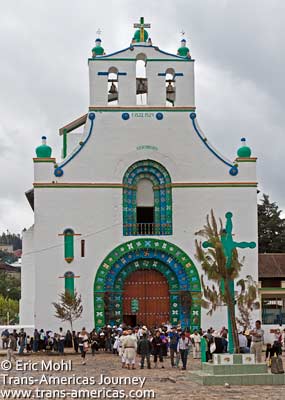 Chamula’s claim to fame is beautiful on the outside and other-worldly on the inside but there’s a serious no photos policy.

The white facade with colorful blue and green trim is fairly unassuming. Inside, however, is an amazing world of Mayan customs and Spanish Catholic tradition. Dry pine needles blanket the tiled floor. There are no seats but locals sit and squat on the pine needles as they meticulously arrange candles in all shapes, sizes, and colors. Each person seems to have their own personal design in mind and the floor is ablaze in flickering patterns–the only light in the whole dark space. Men and boys wander around scraping the dregs of spent candles off the tile and making sure the pine needles don’t ignite.

The walls are lined with niches which house carvings of saints we recognize and some we don’t. Smoke from copal incense obscures their faces, mirrors and doll parts and other offerings hang from their limbs. Some people faced the front altar (the altar paintings were all missing when we visited) and some faced a saint along the walls as they lit their candles and mumbled their prayers in the Tzotzil language. One woman was swinging a docile live chicken as she chanted.

The effect was hypnotizing and it was one of the most transporting experiences we’ve ever had in a church.

By the time we emerged back into the sunlight, the resentful vibe eased up a bit as the men (and some women) were becoming increasingly blotto on clear alcohol made from fermented sugar cane called posh (pronounced pox) which they like to mix with Coca-Cola. One theory is that the belches produced by drinking carbonated beverages are thought to expel bad spirits. Our theory is that the special billboard Coca-Cola put up along the road near Chamula, aimed squarely at the local market, has done its job. 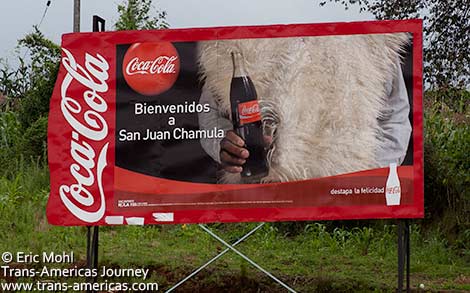 They’d like to teach the Mayan world to drink. 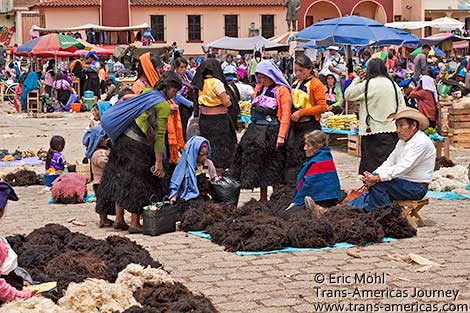 Roughly spun wool, which the local communities weave into fabulously fluffy skirts and tunics to ward off the cold in the Chiapas highlands, for sale at the Sunday market in Chamula.

Exploring the Chamula market, with its gorgeous piles of rough wool and its smattering of fresh produce, and silently soaking up the atmosphere in the church made us hungry so we stopped at a little stand where a woman was grilling chicken. With so many begging children around (where, exactly, was our 20 peso entrance fee going?) we saved some of the food to give to the kids in the parking lot where we’d left our truck. Imagine how stupid we felt when we returned to our truck to find that some of those kids had splattered sticky, drippy fruit all over the passenger side window and shoved soda cans and candy wrappers into the bed. 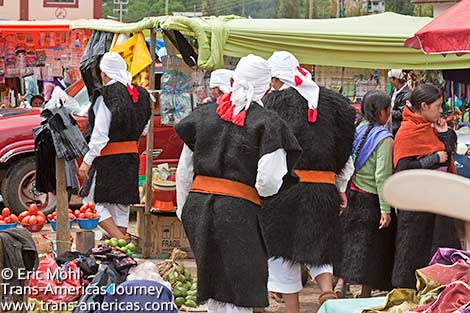 It’s a rare treat to find areas where both men and women retain their traditional dress.

Wander around the Chamula market and watch a procession leaving the town’s famous church in our video, below.

The Tzotzil Mayan town of San Andrés Larráinzar hosted peace talks between the Zapatistas and the Mexican government (whose representatives sometimes failed to show up for scheduled talks, accusing the Zapatistas of propogandizing) in the mid ’90s. 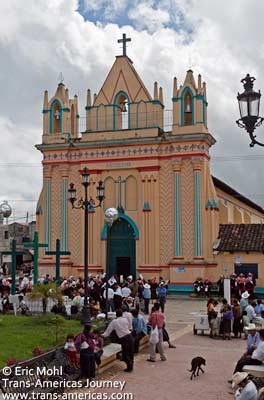 The church in San Andres Larráinzar.

We arrived in Larráinzar in time to grab some tamales from a vendor at their local market, which fortified us for a good half hour of watching men wearing fancy hats and sashes (members of the local civic and religious groups) stumble around blind-drunk in front of the town’s church.

There seemed to be a hierarchy and specific roles to play. Some were attempting to dance, some attempting to play music, some orchestrating events, but all of them were too inebriated to accomplish much. A few were simply slumped over on a bench next to the church entrance. 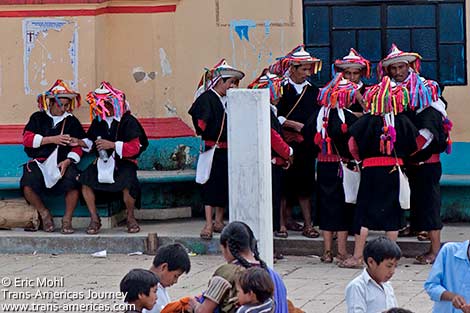 If anyone has any theories (beyond the obvious) about why binge drinking is a such a huge part of so many market days and religious days in indigenous areas around the world, please share your comments here.

Though we arrived too late to take in the market in San Lorenzo Zinacantán  (most are over by noon at the latest) we paid our 15 peso (US$0.75) per person entrance fee and checked out what this town is really famous for: bright blue and purple floral weavings. 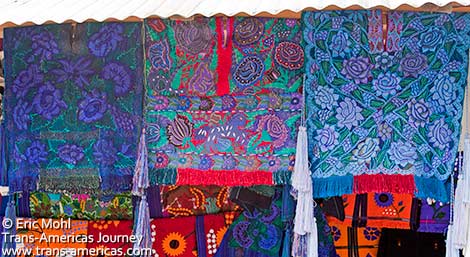 Zinacantán is famous for its textiles in dizzying colors and patterns.

The colors are almost blinding and the large floral motifs are bold to say the least. The local women look fabulous in the the boxy blouses they make out of these fabrics, but most tourists end up looking silly. Though if we still had a house we would have been tempted to buy one of the blouses from one of the women selling them from small shops in the center of town and hang it on a wall as pure art. 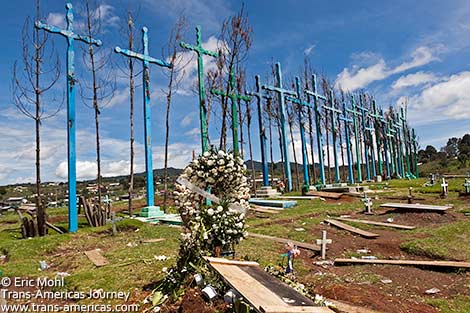 Another great day trip destination outside San Cristóbal is actually the final destination for many Tzeltal villagers. Near Tenejapa lies the Romerillo cemetery where tall light blue and light green crosses are arranged on the crest of  a hill. Like lop-sided sentinels, they keep watch over a ramshackle (and, sadly, garbage-strewn) collection of graves. 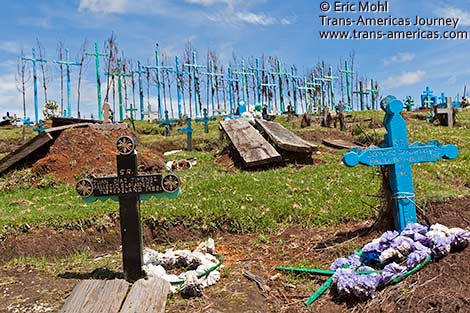 The small crosses on each grave are color-coded to indicate the nature of the person buried there (old, female, male, a child, etc). Each grave is also topped with a simple wooden door or wooden planks. On Dia de los Muertos (Day of the Dead) the wood is removed so people can “talk” to their dearly departed.

The immediate effect is an unshakable impression that zombies will be shoving their rotting arms up through the earth and rising up through the doors at any moment. Creepy, but cool.