Though coffee and Zapatistas might be the first things that spring to mind when you think about travel in Chiapas, this high-altitude state in southwestern Mexico also offers sophisticated city fun in San Cristóbal de las Casas and outdoor fun in the tranquil lakes of Lagos de Montebello National Park, where you can hike and raft, and the raging Cascada El Chiflón waterfall. You can even dip a toe into Guatemala. 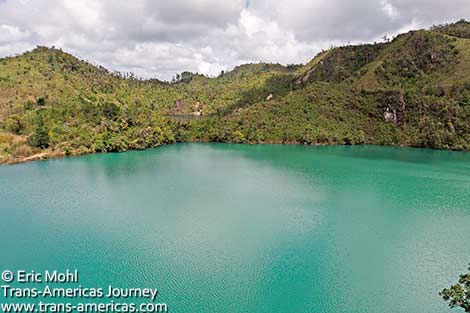 Just one version of the many shades of blue and green displayed in the lakes of the Lagunas de Montebello region in Chiapas.

Parque Nacional Lagunas de Montebello was created in 1959 and its 15,000 acres (6,000 hectares) and the surrounding area are punctuated with more than 50 gorgeous mountain lakes in varying shades of blue, green and blue/green. A good paved road winds through the park past a group of five lakes called Laguna de Colores because each one is a distinctly different hue.

All of the lakes in the park are visible from convenient roadside turnouts along what is one of the closest thing to a US-style National Park road we’ve seen in all of Mexico.

A warning though: as soon as your vehicle slows down you will be swarmed by men and boys offering to be your guide along trails to and around various lakes. If you happen to want a guide, look for 14-year-old Emmanuel. He is charming and has learned to speak very good English and if ever there was a kid who was worthy of your pesos it’s Emmanuel.

Past the lakes we parked the truck and took a short walk to see the caves and natural rock arch at Grutas San Rafael de Arcos. Ignore the Propiedad Privada (private property) sign and walk down the dirt road past a small group of houses and corn fields to get to the trail that winds through the forest. High water, again, prevented us from reaching the arch but we did get to see a group of caves with water raging through them. Pretty spectacular. 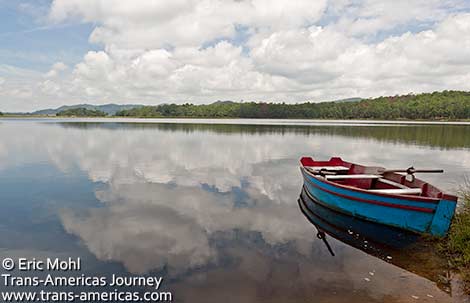 One of the inviting lakes of many colors in the Lagunas de Montebello region of Chiapas, Mexico.

From there we backtracked past Lagos de Colores (where we waved goodbye to our new friend Emmanuel) and headed for Laguna Pojoj. After paying 10 pesos (about US$0.80) per person to the ejidos, local communities that own the lakes on this side, we found ourselves among huge buses full of Mexican tourists hell-bent on getting onto Huck Finn style rafts and being paddled around Pojoj and deposited on a picturesque island. We fled.

Laguna Tziscao had more tour buses and more rafts plus a marimba band, which reminded us just how close to Guatemala we were. A bit further on, Laguna International is actually bisected by the border between Mexico and Guatemala and you walk across the border, enter Guatemala, then re-enter Mexico during a stroll around the lake–one of the rare visa-free crossings we’ve ever encountered. 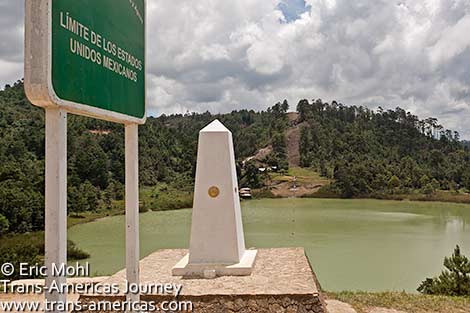 The border between Mexico and Guatemala cuts right through Laguna International in the Lagunas de Montebello region of Chiapas.

A quick trip into Guatemala…

The Lagos de Montebello area is right on the border with Guatemala and marimba players walk over the border and perform for lake visitors. Check them out in our video, below:

There were some tempting two story bungalows on the lake here, but we resisted their charms and moved on to the Cinco Lagunas area where (you guessed it) five more lakes awaited. Cobalt blue Laguna La Cañada was the most spectacular of this group with rocky spits on both sides which nearly cut it into two separate lakes. We wished we had a kayak. 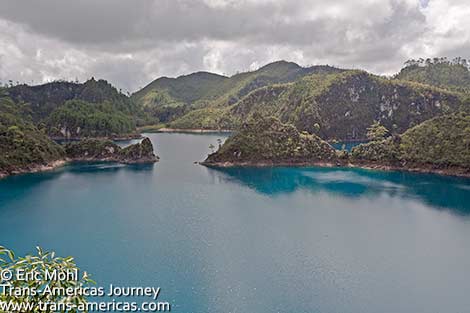 The next day we headed to Cascadas El Chiflón for water of an entirely different nature. Where the lakes had been tranquil and relaxing, Chiflón was raging in high water, beyond control, totally out of its banks due to the recent heavy rains. 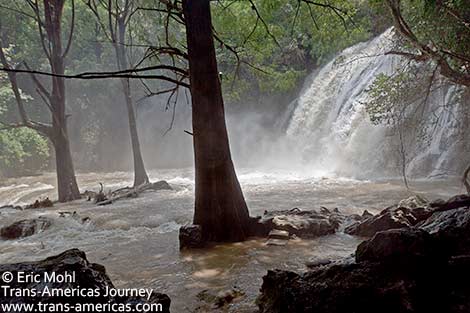 Still, the trails and picnic tables and cabins and a few camp sites around the falls were busy with Mexican holiday makers. We put on our Crocs and grabbed a plastic bag for Eric’s camera (and our own picnic supplies) and walked up the trail toward the action. 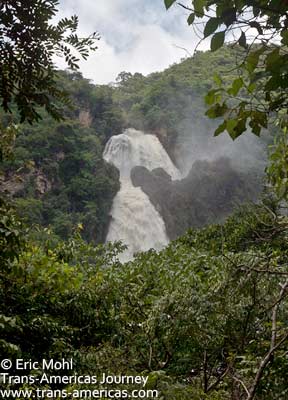 The area’s namesake waterfall, Chiflón (which means big whistle), is near the bottom of the trail. The real star, however, is Cascada Velo de Novia (Bridal Veil Falls), a nearly 400 foot (121 meter) monster at the top of the trail. With high water raging, this waterfall is more like a waterwall and Eric got soaked getting pictures and video. The spray alone was like a heavy rain.

Wet and hungry, we grabbed a picnic table back down at the bottom of the trail and made sandwiches while secretly wishing that one of the Mexican families grilling up beef and onions would take pity on us.