Culture lovers flock to this small city in northern Peru drawn by its museums, proximity to area archaeological sites, and a beloved regional dessert named after a giant fictional primate. Use our city travel guide to learn more about what to do, where to eat, and where to sleep in and around Chiclayo, Peru. 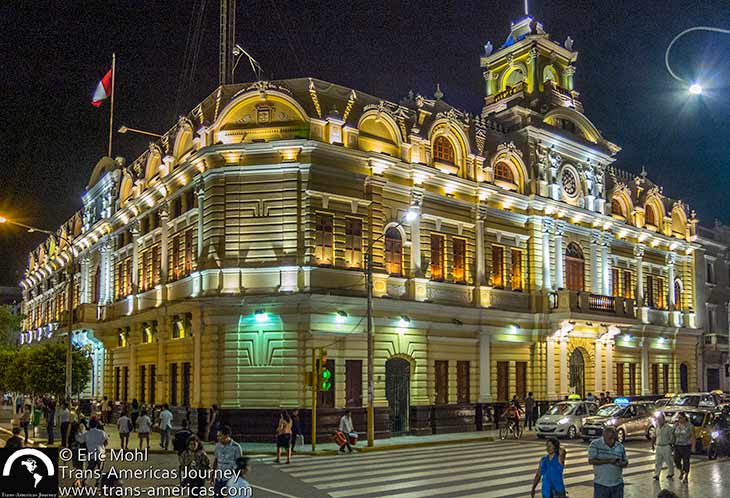 Right off the bat, Chiclayo struck us as a really aggressive city with pushy drivers, impatient locals, and undeniably ugly architecture. And that was even before someone smashed one of our truck windows (details below). Ironically, some say the nickname for Chiclayo is “the capital of friendship.”

Chiclayo is the capital of the Lambayeque province which is about 500 miles (800 km) north of Lima. Pre-Columbian cultures in the region include the Wari, the Moche, and the Sipán. This means the province is a hotbed of archaeological sites (including Huaca Rajada and the Túcume archaeological site) where experts work to preserve and present what remains of early cultural groups.

What to do in (and around) Chiclayo, Peru

We considered joining a group day tour to area archaeological sites and museums (around 55 soles or about US$14.50 per person) for the convenience, but we decide to drive ourselves and tour those attractions without guides. 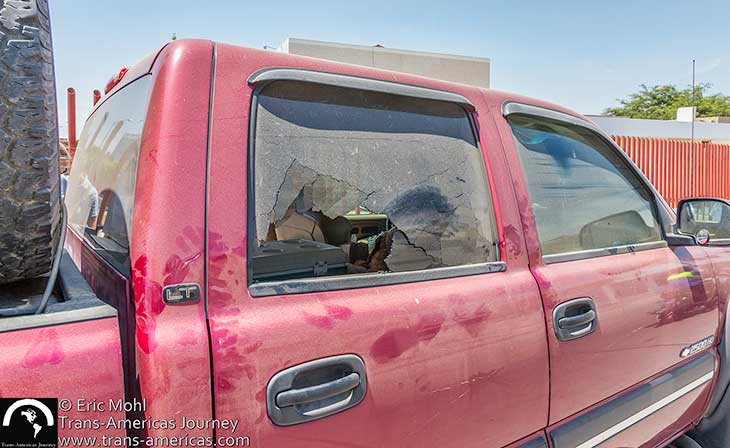 Our first (and last, we hope) theft attempt happened in broad daylight on a busy street near Chiclayo.

Turns out, we should have taken a tour because thieves broke a window while our truck was parked on a busy street in front of the guarded Brüning Museum in Lambayeque (7.5 miles or 12 km from Chiclayo) in broad daylight at noon. This is the first and last (so far, we hope) time that anyone has broken a window in our vehicle. Apparently, the thieves fled when our Viper alarm went off and nothing was stolen, but our window was smashed which lead to a frantic quest to find a replacement window that would fit our truck (not easy in a country where our specific model of truck is not sold). Many hours of searching and about 300 soles (roughly US$80) later, we sort of succeeded.

We now have one window that mostly fits and is silicone sealed in place which means we can never roll that window up or down. A safer bet would be to park your vehicle in the interior lot at the nearby Museo Tumbes Reales de Sipan a few blocks from the Brüning Museum. You’ve been warned. 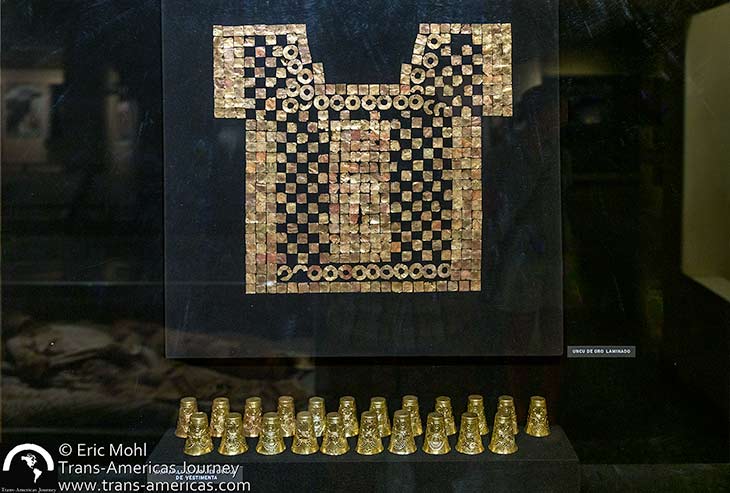 Spectacular workmanship can be seen in the Brüning National Archaeological Museum near Chiclayo, Peru.

The Museo Arqueologico Nacional Brüning (Brüning National Archaeological Museum, 8 soles or about US$2 per person), is home to more than 1,400 pieces from the Moche, Chavin, Lambayeque, and Inca cultures many of which came from the private collection of German archaeologist Hans Heinrich Brüning Brookstedt who lived and worked in the region in the late 1800s and early 1900s. 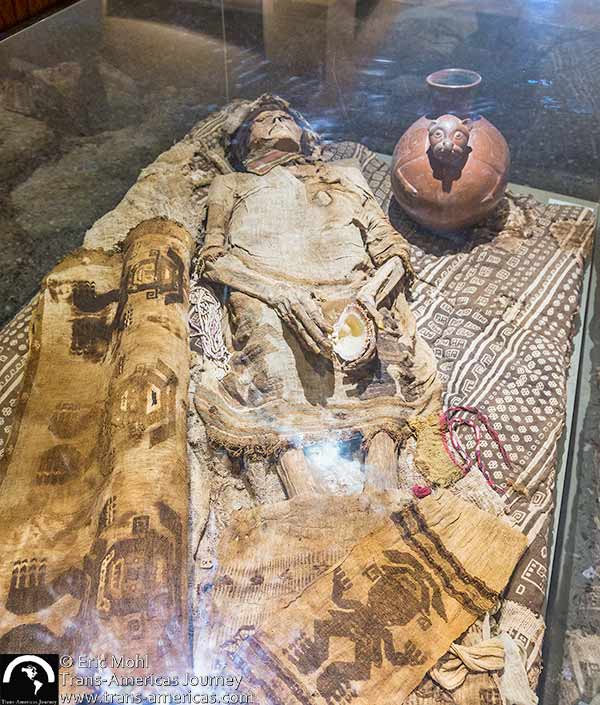 Mummies and more at the Brüning National Archaeological Museum.

Some of the pottery on display was made using molds which enabled intricate designs and more uniform results. There are also gold items on display along with textiles, burial paraphernalia, mummies, and much more all displayed well on four floors. Some signs and descriptions are in English as well as Spanish. 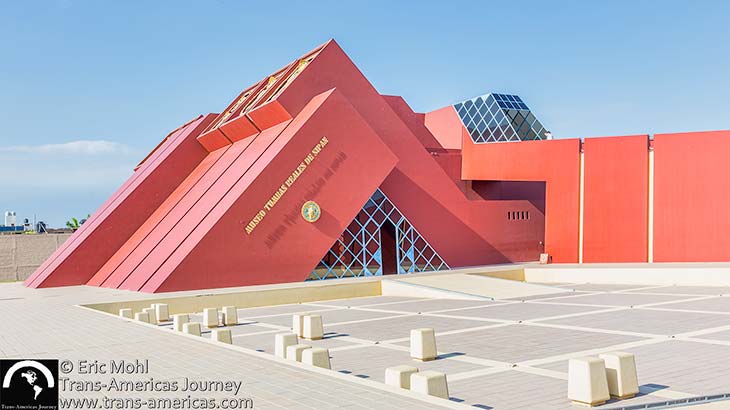 The unexpectedly modern architecture of the Royal Tombs of Sipán Museum near Chiclayo riffs on shapes found in ancient constructions.

At the nearby Museo Tumbes Reales de Sipán (Royal Tombs of Sipán Museum, 10 soles or about US$2.60 per person, plus 2 soles or about US$0.50 to park in the interior lot near the entrance) no cameras are allowed inside. If you bring a camera in with you, you’ll have to leave it in a locker while you tour the museum. 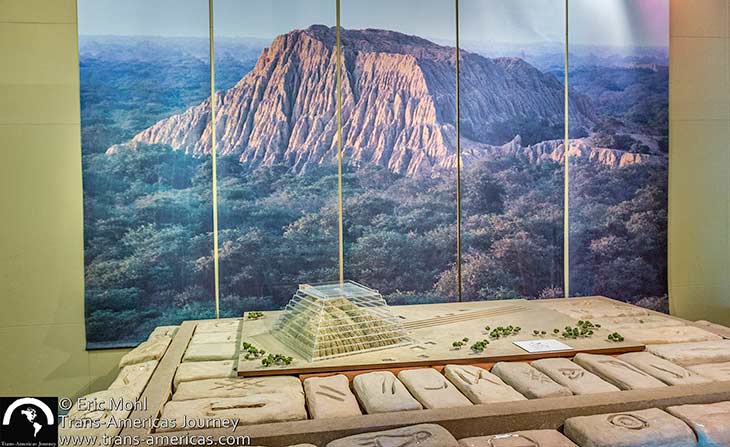 A diorama of the Huaca Rajada archaeological site inside the Royal Tombs of Sipán Museum.

The air-conditioned museum, which was inspired by the pyramidical structures of the Moche culture (100-700 AD), is starkly geometrical outside and very dark inside. However, the exhibits–including an amazing collection of burial items from the Huaca Rajada archaeological site, pottery, gold objects, silver objects, and copper objects–were all very well lit. Many of these pieces, created by the Moche people, exhibited amazing craftsmanship. 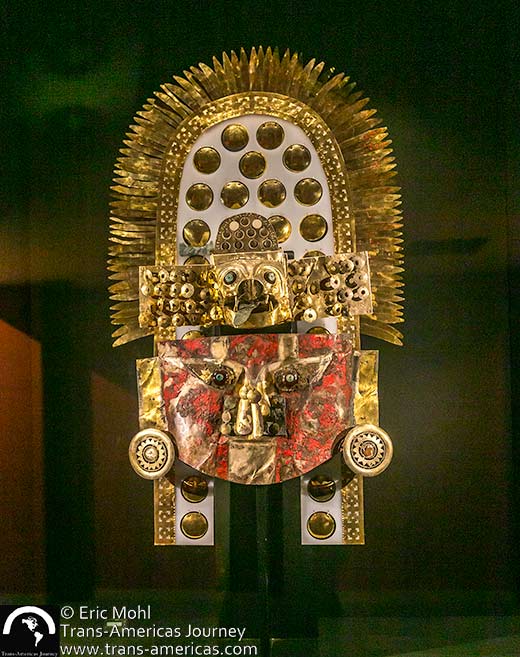 Just part of the splendor that was found in the tomb of the so-called Lord of Sipán.

The star of this museum, however, is the so-called Lord of Sipán. Found in 1987 what is now the Huaca Rajada archaeological site near the town of Sipán, this Moche leader’s burial site has been recreated in the museum so visitors can see what it looked like when archaeologists unearthed it after feuding looters attracted the attention of the police. Original artifacts found with the buried leader, including gold, silver, and precious gems, are also on display at this museum. Signs and descriptions were in Spanish only.

If you’re into architecture, seek out post-colonial adobe and wood mansions in Lambayeque including Casa de la Logia Masónica. This 400-year-old construction has a 210 foot (64 meter) long balcony that’s said to be the longest balcony in Peru. 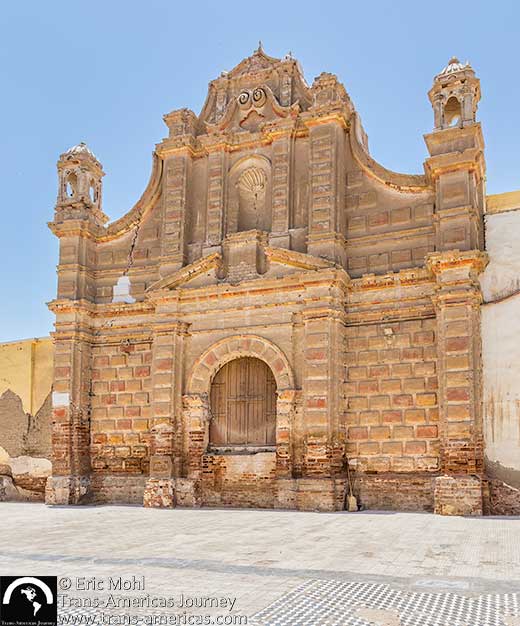 The facade of the San Pedro church near Chiclayo.

The Iglesia San Pedro in Lambayeque, which dates back to the mid 17th century, is also worth a quick visit to see its two towers, three naves, and rococo altars covered in gold leaf. Seventeenth-century murals were found behind some of the altars. 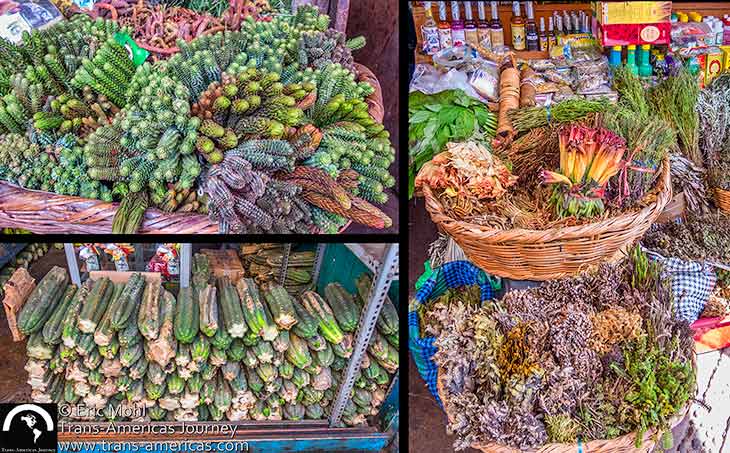 Natural remedies for what ails you in the witches/healers section of the market in Chiclayo.

The Chiclayo area is also said to be a hotbed of brujos (witches/healers) and the main market in Chiclayo has an area where tinctures, herbs, potions, lotions, candles, incense, and plenty of other things we couldn’t identify are sold as remedies for what ails you (from heartbreak to cancer). Hallucinogenic San Pedro cactus was also available and we saw scopolamine flowers for sale as well. 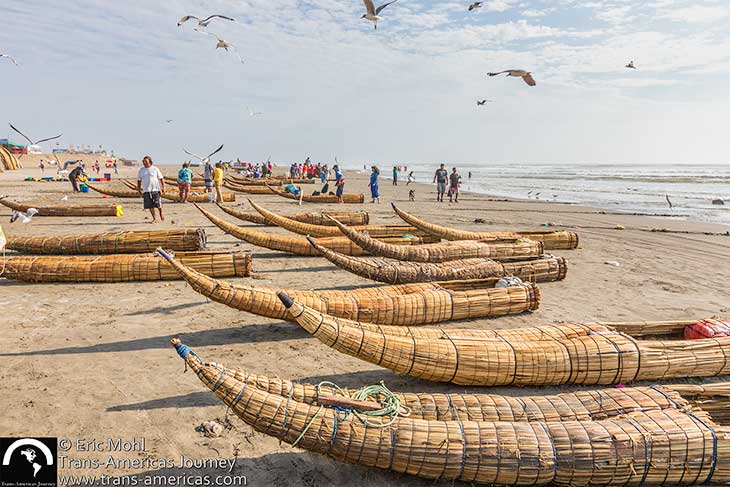 Traditional reed boats on the beach in the town of Pimentel.

Just 5 miles (8 km) from Chiclayo, Pimentel is a chilled-out beach town escape from the city. Pimental is famous for its fishing fleet that still uses traditional reed boats (similar to those used by fishermen in the beachfront town of Huanchaco near the city of Trujillo) and you’ll see many of them on the beach.

Where to eat in Chiclayo

El Pescador Restaurante is an institution in Chiclayo, so much so that the location on the outskirts of town has no sign. The restaurant’s popularity was earned over years of serving up very affordably priced very large plates of seafood (ceviche, tiraditos, chicharron de pescado) and beloved traditional meat dishes. 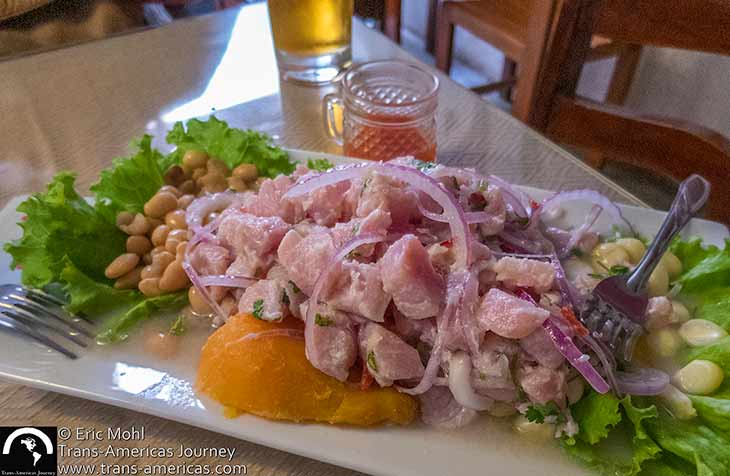 By the time we arrived at El Pescador, the door was already closed (they’re generally out of food and closed by 5 pm), but they let us in and we enjoyed the easy-going vibe, cold beer, and excellent ceviche. We were there on a weekend when the restaurant also offers two local specialties: goat with beans and duck with cilantro rice. We ordered the duck which was a bit tough but the cilantro rice was rich and tasty. 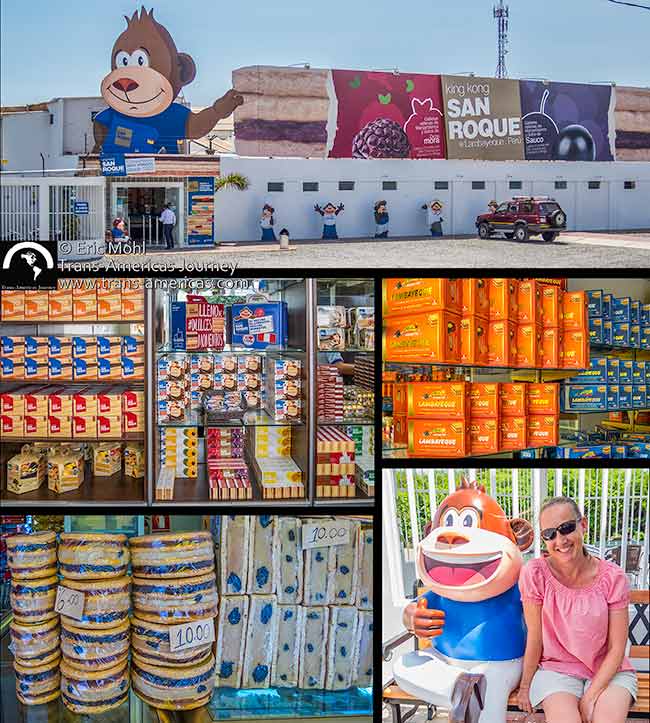 Are you ready for King Kong?

Good news for those with a (very) sweet tooth! Lambayeque is famous for King Kong confections which are made in factories in Lambayeque and sold in shops all over town. So, what is a King Kong? Imagine a tall stack of thin crispy cookies with manjarblanco (a thickened and sweetened milk-based spread) and different fruits layered in between them What you end up with is sort of like dessert lasagna that comes in various shapes and sizes.

King Kong is way too sweet for us, but Peruvians arrive from near and far to get this regional sweet treat. We never saw this product again in all of our months spent exploring Peru, so if you’re into it get your fill in Lambayeque.

Where to sleep in Chiclayo

We struggled to find a clean and affordable place to sleep in Chiclayo that also had a parking lot for our truck for under 80 soles (about US$22). Our first choice, The Paraiso, was full. Anything with air conditioning (like The Embrador) was 100 soles per night or more and many places had nowhere to park the truck even in higher price points.

We eventually settled on Hostal Colibri where 75 soles (about US$19) got us a private room with a fan and a private bathroom but no breakfast. After our experience with the smashed truck window, the clincher for us was the fact that Hostal Colibri had a nearby lot where we could securely park our truck.